Even though it's been right there before my eyes all my life, I've never really noticed this wee hill before. Maybe it's because when you look across the Clyde from Gourock your eyes are drawn towards the Arrochar hills or even Ben Lomond. The wee Grahams of Argyll don't get a look in...or they didn't until I got myself a bike and decided that a day out on the hills didn't need to involve ever increasing car journeys in the interests of turning red balloons blue on my Munro map, or forlornly chasing the best MWIS forecast. Oh no, I could be out of my house, across on the ferry and cycling alongside Loch Eck all in the time it would take me to hit the Stirling motorway services. Beinn Mhor made for a fine day out a few weeks ago and a poor weather forecast this weekend gave us another opportunity to head overseas and explore more uncharted territories. This time the target was Beinn Ruadh which we decided to approach from the Puck's Glen carpark on the A815. The cycle in is straightforward, relatively short and absolutely enjoyable, an easy birl around the banks of the Holy Loch takes you to the start point in 40 minutes or so. There is a network of paths that start from the car park; we chose a route that wound north-east through the trees before joining the Upper Puck's Glen path and breaking onto the open hillside from there.The walk through the upper glen section is beautiful and rightly is a popular walk in its own right. It's a magical place amongst the spruce, birch and larches; quickly the road seems hours away and quiet descends.The path is narrow and follows the occasionaly steep-sided and narrow line of a burn with trees shooting up on either side and verdant mosses and fern fronds lending it a Jurassic Park feel. Evidence of storm damage (or a Puckish tantrum?) was clear as we continued to pick our way upwards. I remember reading a description of the walk-in at the beginning of the Ring of Steall walk as being the finest in Scotland. Puck's Glen ain't too shabby either. We knew it wasn't going to be a day for views so apart from the odd glaury glimpse of the Holy Loch behind us or to mist shrouded forestry on Stronchullin Hill we made do with some pretty wee close ups as we made our way higher. A faint path leads out of the trees then disappears as you ascend to the hillside. bear left at the thistle As we picked our way through the dense grasses in a north-easterly direction the terrain became increasingly wet. In fact, a snorkel might have been a decent piece of kit to bring along. On more than a few occasions, what seemed to be firm ground gave way to swamp and we found ourselves knee-deep or hip-deep in bog. Refreshing! Once you accept that you are going to get soaked you may as well embrace the full experience. We were Wet Wet Wet and our journey towards Meall Odhar and then on to Beinn Ruadh became a 'Sweet Little Mystery', the cairn all but invisible until we splashed on to it. On our cycle in we had seen a sign for the world swamp soccer championship being held around the peninsula in the direction of Ardentinny. It certainly felt like Beinn Ruadh would have made for a fine venue for a match as we squelched to the cairn. . 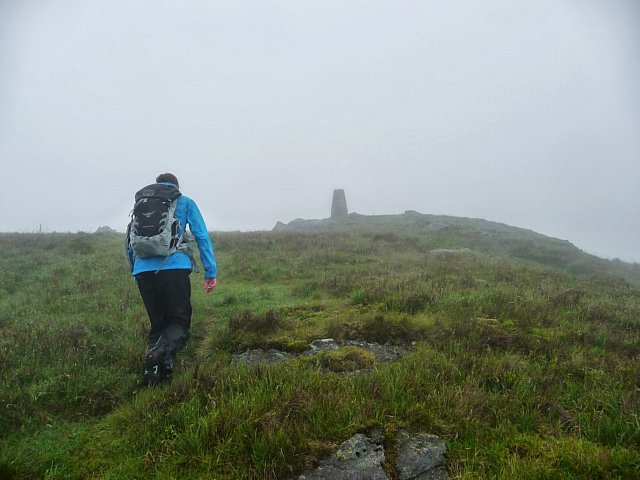 nothing to see up here! It was a bit of a relief to get back to the sanctuary of the trees and onto more solid ground again. Thank Puck indeed. We took our time on the way down, enjoying the tranquillity of the glen and admiring the lush greenery of the place. It's certainly a well-watered area. I had stashed my bike at a crossroads at the marking the start of the Upper Glen path and enjoyed the chance to try a real bit of MTB-ing on the dirt track back to the carpark. Was a bit hairy at times but thankfully I managed to stay upright, unlike up on the Beinn Ruadh everglades. It had been another cracking day out on the Cowal Peninsula. I love that this area is so close to home yet feels like a world away. 
Beinn Ruadh (2).gpx Open full screen  NB: Walkhighlands is not responsible for the accuracy of gpx files in users posts

Re: Puck's Glen to Beinn Ruadh

Nice report! I did the same walk this weekend and can confirm the wetness. 'swamp' is indeed a good word to use!

Re: Puck's Glen to Beinn Ruadh

Looks a nice walk. Keep it for a dry day i think.