Four days after the solstice, and summer had been struggling to get going. This day the weather seemed promising, and for the second day running I drove from Loch Ewe to Kinlochewe (at the head of Loch Maree

) and the car park at Incheril. In pleasant, warm conditions, I set off walking alongside the Kinlochewe River towards Loch Maree. I crossed over a lively Abhainn an Fhasaigh and walked uphill alongside it for a while, on a sometimes boggy path. I bore left, heading upwards and around Sgurr Dubh, into Coire na Sleaghaich. Clouds threatened to lower and drizzle started, but the top of the mountain remained clear. Soon the drizzle died out. 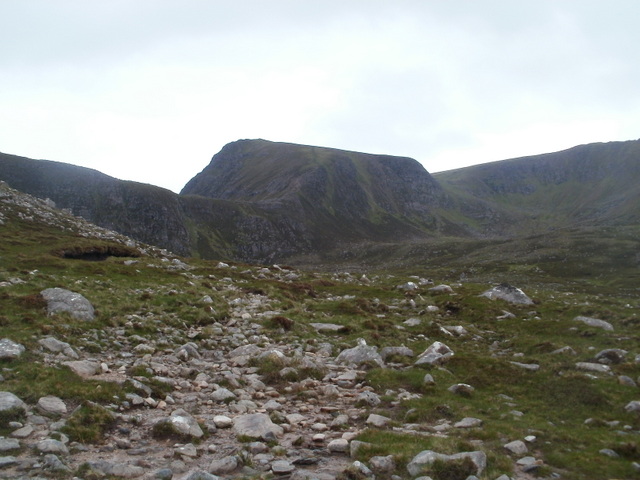 After taking the path slanting up the corrie wall, I arrived at the lochans between Sgurr Dubh and Slioch. I began the climb towards the summit region, with nice views down over the two lochans. As the gradient eased, I looked left, where the Torridons made a fine backdrop for Loch Maree. I reached the trig point at 980 metres, looking on to the 981 metre summit. conditions were fine; summer did seem to be here. On moving to the 981 metre summit, there was a superb view of Loch Maree. But beyond the loch, a shower was moving in. Looking inland, the weather was still clear over the eastern Fisherfields. Next I headed west along An t-Aon Cheum. On the left was a beautiful view of Loch Garbhaig and Lochan Fada (here, the lochan is much larger than the loch

), backed by the western Fisherfields and An Teallach. Moving along the ridge, I was heading for Sgurr an Tuill Bhain. Looking behind, the shower looked like it would soon arrive. But then, with all else around shaded by cloud, the sun shone on my lucky mountain, A' Mhaighdean. A good omen? Sure enough, the shower passed by to the north over the Fisherfields, and I only caught a bit of drizzle at its edge. The ridge became narrow and quite spectacular as I moved further along. I arrived at the top of Sgurr an Tuill Bhain, looking over to Beinn a' Mhuinidh. The descent began with a view forward to the head of Loch Maree peeping behind Sgurr Dubh, with Beinn Eighe behind. There was a bit more light rain, but that soon petered out. Beinn a' Mhuinidh stood out on the left, as the descent continued. Finally I dropped down to Loch Maree, ready for the walk out by the Kinlochewe River. As I made my way back towards Kinlochewe, I could see a substantial downpour over the Torridons, which seemed to be getting closer. But this one, too, never quite arrived. At last I approached Incheril, at the end of what had been an enjoyable day. very nice, simon - one of my favourite areas from previous family holidays - have done a fair bit of low level walking and mountain biking round here but have yet to get to Slioch - the detail in your WR will help when I do - cheers

rockhopper wrote:very nice, simon - one of my favourite areas from previous family holidays - have done a fair bit of low level walking and mountain biking round here but have yet to get to Slioch - the detail in your WR will help when I do - cheers

It is a beautiful area, RH. When you get to climb Slioch, the ridge to Sgurr an Tuill Bhain is definitely worth doing; perhaps the best part of the route.

Heading in that direction this weekend and your report whets the appetite nicely. Here's to some fine views

gordon l wrote:Heading in that direction this weekend and your report whets the appetite nicely. Here's to some fine views

Let's hope you do get those views, Gordon.