Hitting a century on An Teallach

Hitting a century on An Teallach


Three days left of my stay by Loch Ewe, and from the way the forecast was looking, this had to be the day for An Teallach. As I drove towards Dundonnell, the morning was looking pleasant, but cloud was covering the mountain tops. I parked at Corrie Hallie and set off walking.


anteal100.gpx Open full screen  NB: Walkhighlands is not responsible for the accuracy of gpx files in users posts

On the walk in, I met a walker returning after a night camping in the Fisherfield area. He said he'd climbed An Teallach recently. I asked if he'd done the Corrag Bhuidhe pinnacles. He said he had been in the cloud, and wouldn't have been able to see where he was going properly, and so used the bypass. As the mountain came into view, the morning mists had not started to lift. 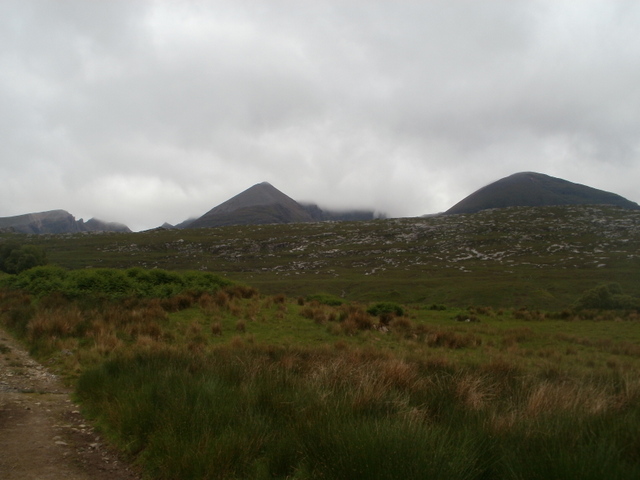 The two walkers I'd accompanied on the Eastern Fisherfields two days before were each veterans of nearly 200 Munros, including Skye. Recently they'd also climbed An Teallach in rain and mist, from Dundonnell. They'd visited the two Munros and then returned the same way, missing Corrag Bhuidhe completely. So I made the decision: if the cloud lifted from the tops, I'd go over the pinnacles; if the mist persisted, I'd think about the bypass. I was caught up by a former mountain guide, a Scot who introduced himself as Ian ("Sassenach spelling" in his own words). He had similar views about the weather regarding pinnacles versus bypass, and was on the way to An Teallach himself.

Perhaps the mist on Corrag Bhuidhe was thinning out. 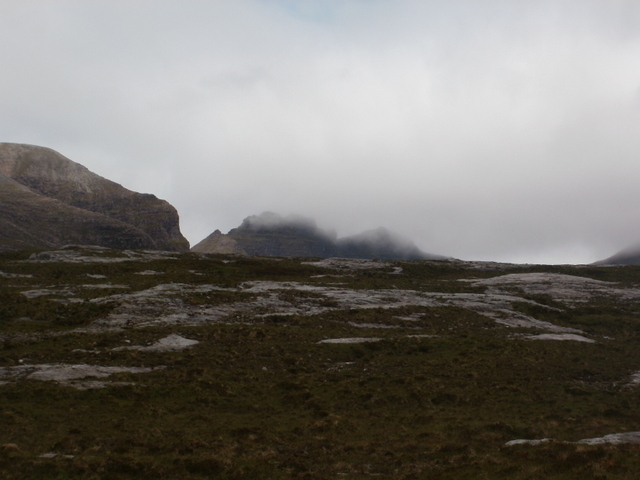 As we walked along talking, I knew previous days' expeditions would start to tell on me, and I didn't think I'd be able to match his pace. That was a shame, because a companion with Ian's experience would have been most welcome on Corrag Bhuidhe. We turned up towards Sail Liath, ready for the first real ascent of the walk. 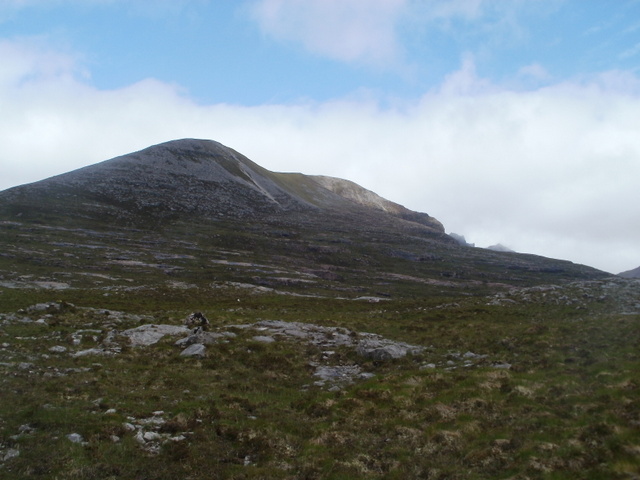 On the climb, we looked left towards Beinn a' Chlaidheimh. 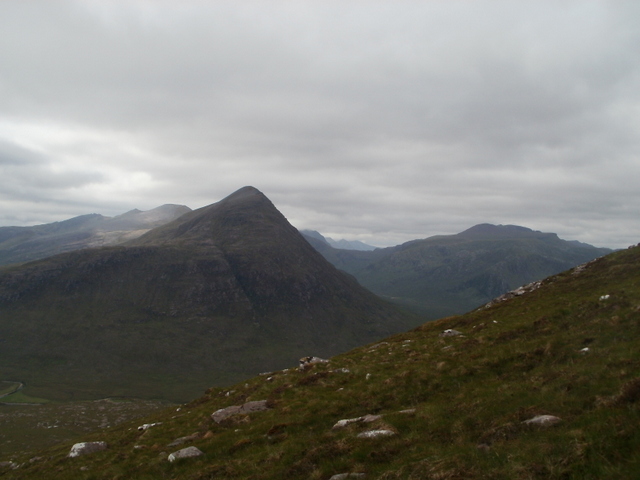 There was a nice view in retrospect, across Coir' a' Ghiubhsachain, to the Beinn Dearg range and the Fannichs. 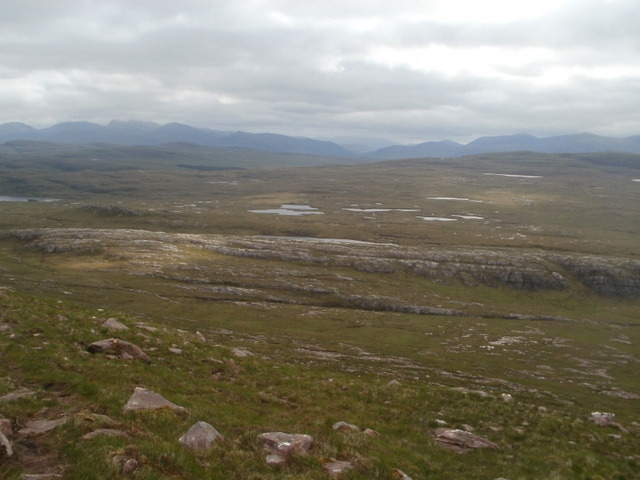 As we headed up Sail Liath and into a boulder field, I knew I'd have to let Ian forge ahead; I'd approach the mighty Forge at my own pace. After taking it steadily for a while, and inspiring view of Beinn Dearg Mor and Bein Dearg Bheag kept me going. 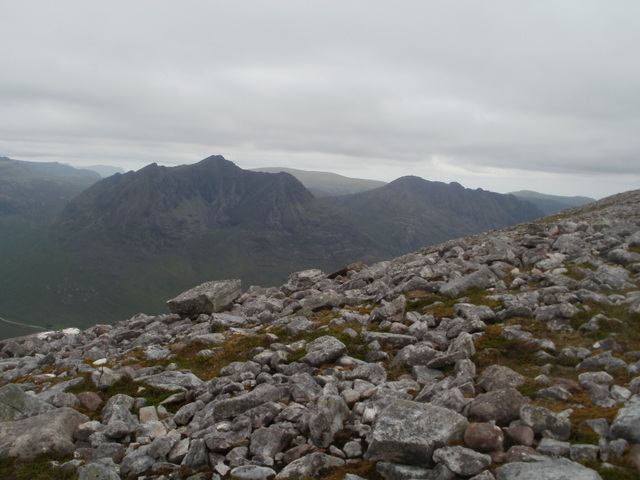 The view ahead to An Teallach opened up, but the cloud was still there. Despite what Ian had said, I wouldn't be surprised if he'd chosen to scramble over the pinnacles. 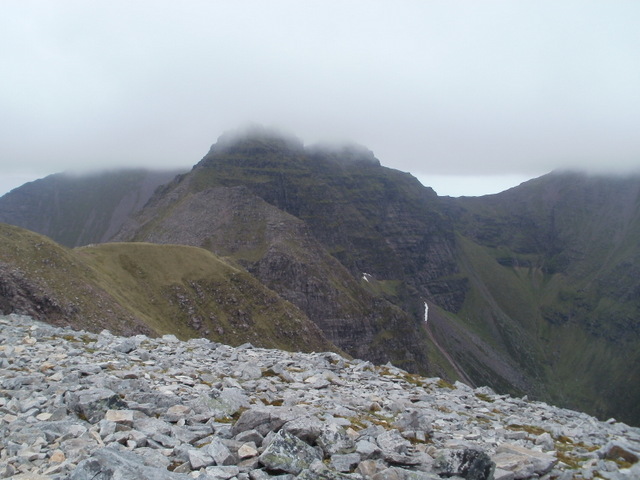 Moving towards Cadha Gobhlach, there was a bird's eye view of Loch Toll an Lochan. 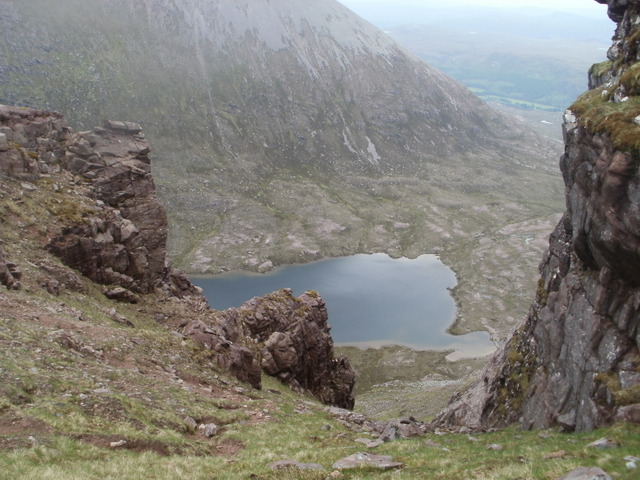 Passing Stob Cadha Gobhlach, the misty top of Corrag Bhuidhe drew ever closer. There had already been some quite exposed parts of the route above Loch Toll an Lochan's corrie, especially on sections of descent. But no real scrambling or knife-edge stuff. 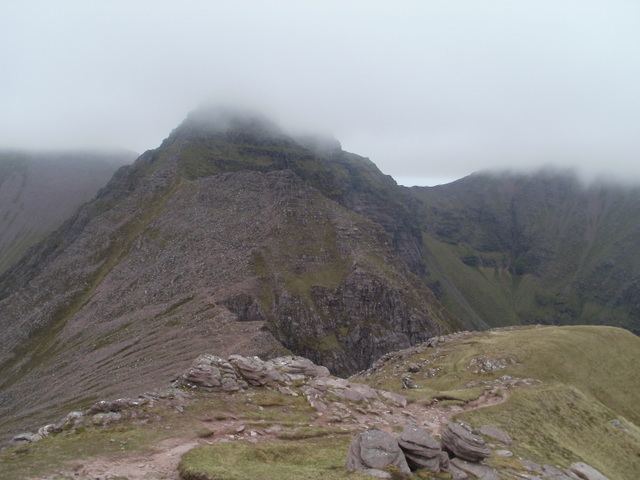 Meanwhile, there was a fine view of Loch na Sealga. 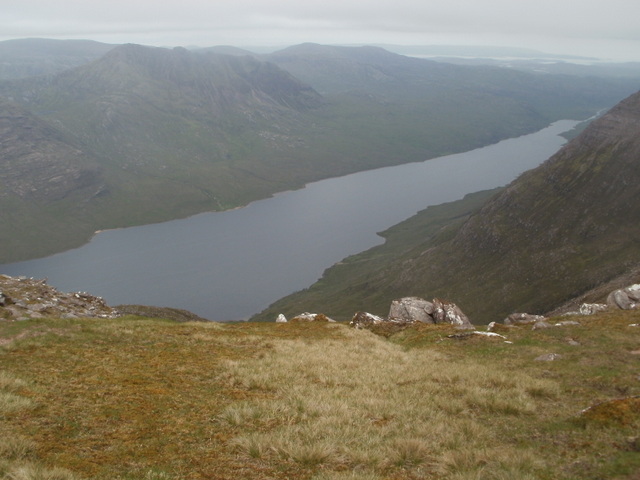 I moved up the ridge and into the cloud. 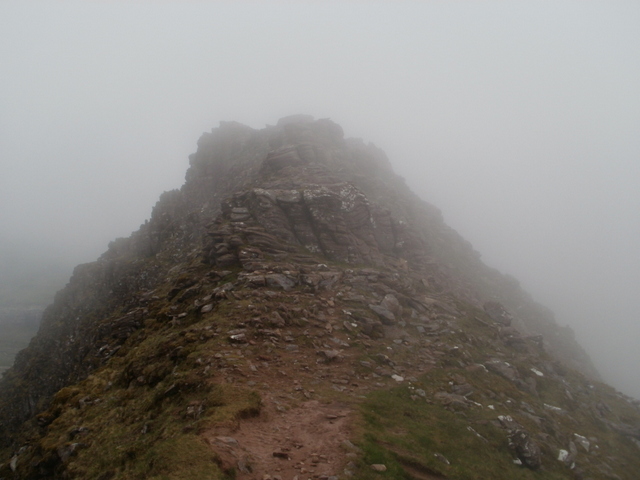 Looking on up, I felt I could handle the pinnacles technically, having read up about them. But that would be if I picked a good line, for which I would have preferred more visibility. 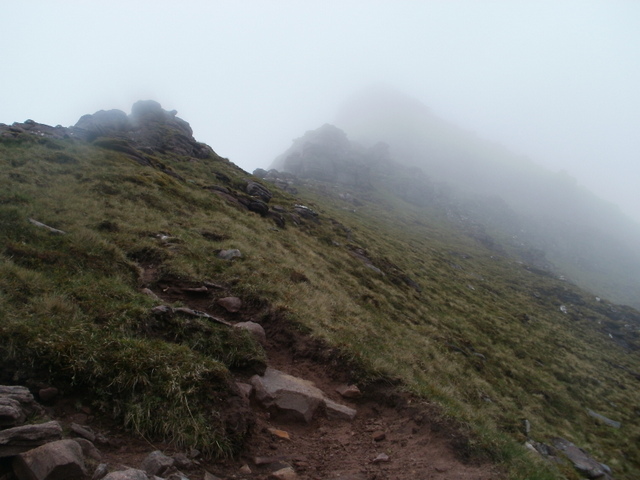 It was also drizzly in the clag, and the rocks were getting a bit wet. I took the bypass. 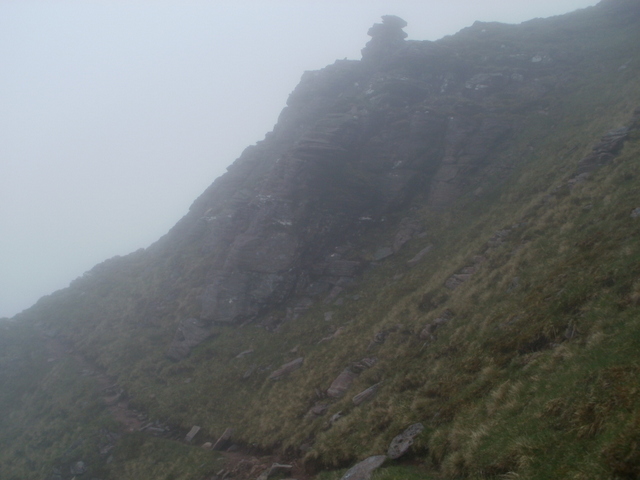 So I arrived at my 100th Munro, Sgurr Fiona. 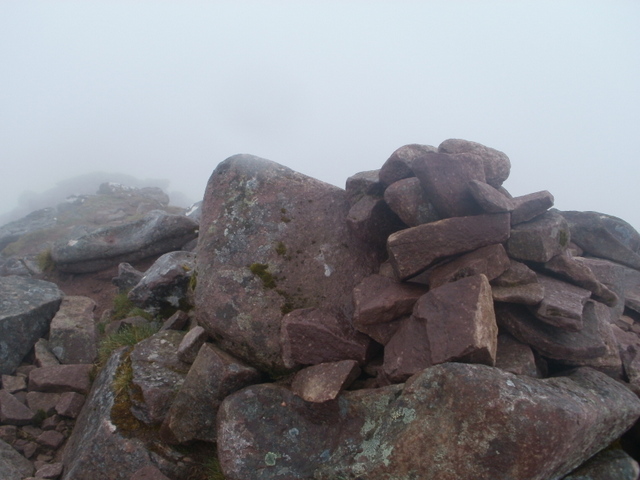 It would have been fitting to have arrived here in style, reaching the cairn after a dramatic scramble over the pinnacles, finishing with a spectacular view back over them . But it wasn't to be. In the Scottish mountains, we know we have to take the weather as it comes, and adapt to it. However, I sometimes look back with disappointment at choosing to miss those pinnacles; the scrambling experience would have been valuable, and even without a view, it could have been exhilarating. As it turned out, taking the bypass seemed like the sensible decision at the time; perhaps it was.

Anyway, it was time to set off on the ridge towards my Munro number 101. 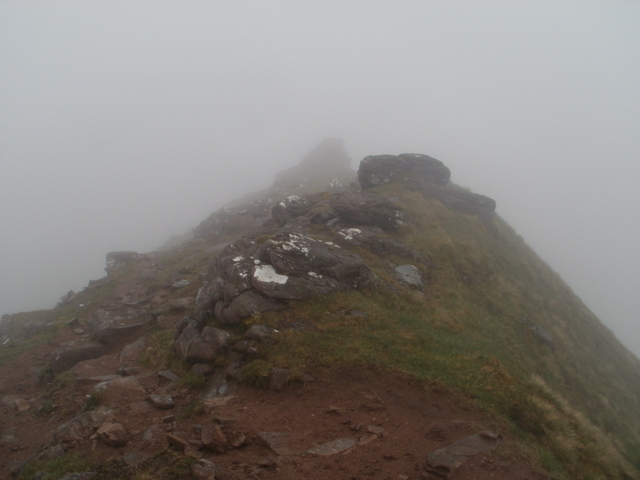 The summit of Bidein a' Ghlas Thuill also had a rather limited view, but it was great to have reached the highest point of An Teallach. 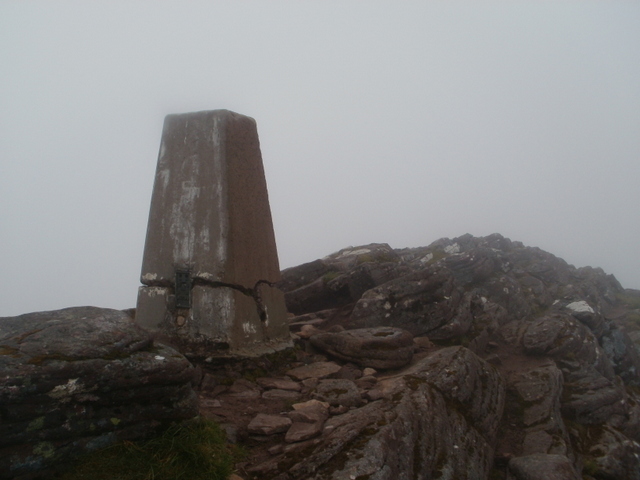 I left along the north ridge, with some spectacular misty views over the edge. 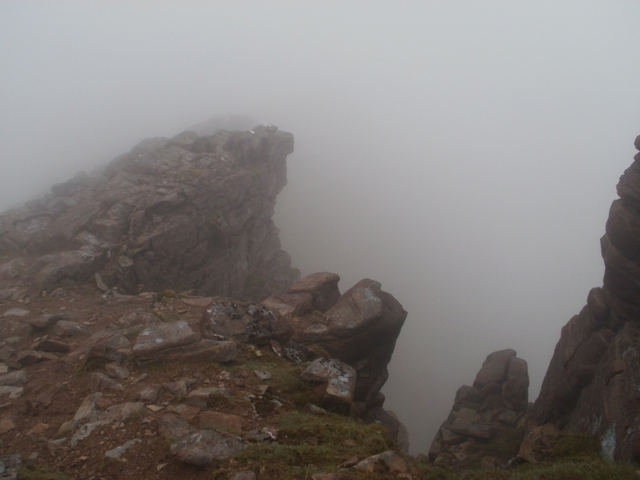 Soon I dropped out of the cloud. 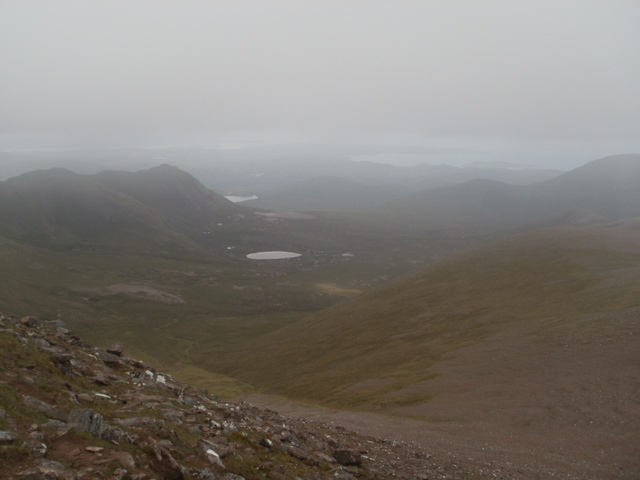 Ahead I could see the path to Dundonnell, with the sea and islands beyond. 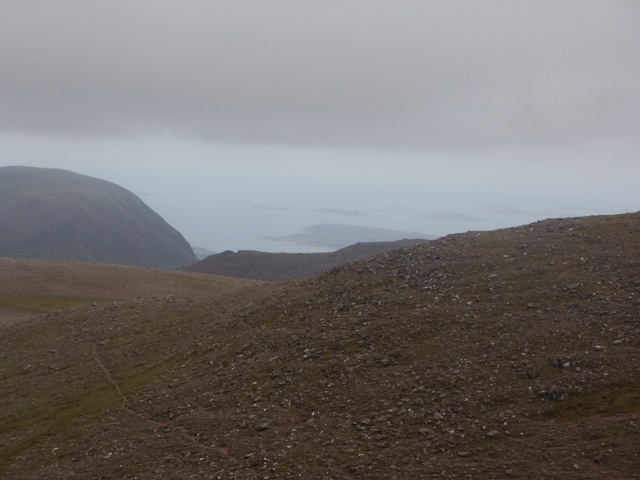 However, I chose a more direct return to Corrie Hallie, and found a fairly steep but manageable path descending into Glas Tholl. 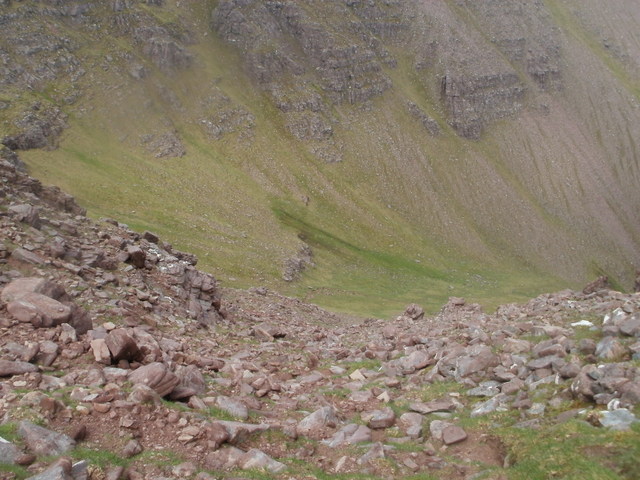 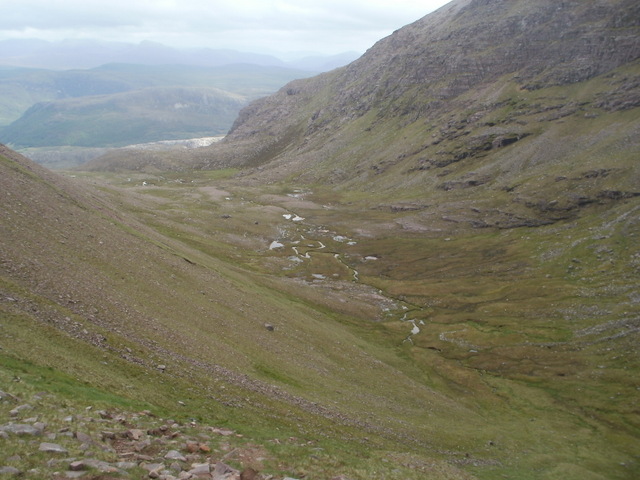 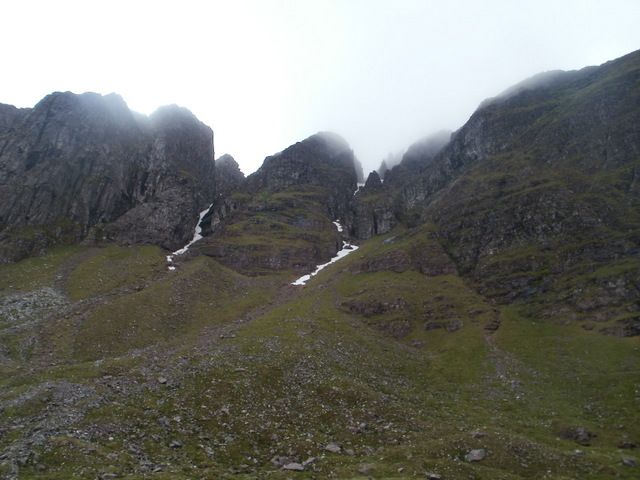 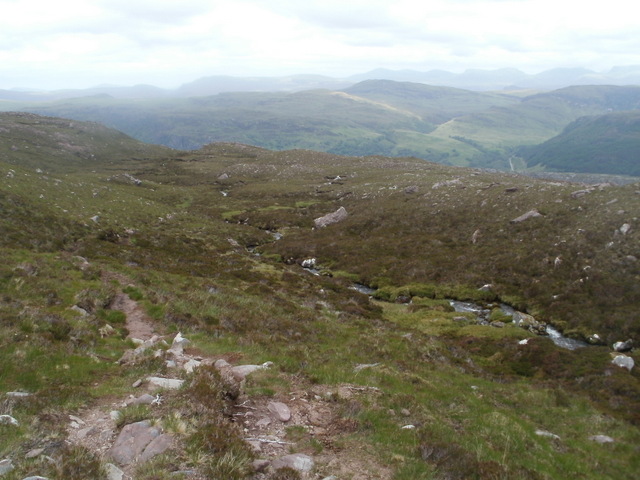 After reaching a track heading back for the road near Dundonnell House and Corrie Hallie, I encountered a jungle of Rhododendrons. They may be very attractive in gardens or their native Himalayas, but here they're choking off the path, as well as choking off the indigenous acid soil plants. 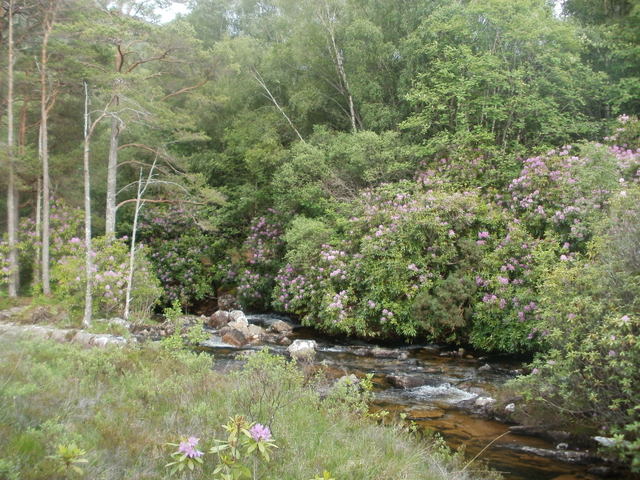 Finally I made my way through the bushes to the road, and had just a short walk back to the car. There was blue sky here, and the weather forecast had been correct. It had been a fine day in the NW highlands. But a patch of drizzly clag had clung to the top of An Teallach all day. Still, mission accomplished, and time to get on with a second century of Munros. And An Teallach is a magnificent mountain, in any weather.

Sensible call in my opinion still to climb An Teallach and the by pass path is calling me loud & clear.

It's a great feeling isn't it

A smashing hill this one, but a real shame about the weather from the summits. Especially as it was a case of hitting the ton too. You'll just have to return one day

But then there was a recent dump of soft late winter/early spring snow across it and I was not fully kitted out, but took a risk I'd be ok

Congratulations on the ton - and what a mountain to celebrate on!

That bypass path is so eroded, almost just as bad as scrambling up the pinnacles...

Well done hitting the ton and a good choice for it, shame about the weather though. Got a friend whos compleating on An Teallach very soon which i hope to be present at.

I did An Teallach a couple of weeks ago with a mate, very similar conditions, and very windy. We also made the call to take the bypass path - we couldn't see a thing when we reached decision time. You made the right choice, no point taking unecessary risks.

GLW, it's a great mountain to look forward to, pinnacles or bypass.

Pete, I'm glad you survived your lesson. There are enough Scottish mountains I've not climbed yet to last a lifetime; I've accepted that I'll never get to sit on Lord Berkley's Seat.

BP, I did want a classic one for the 100, the mountain certainly was that. At least I knew I'd be able to follow the bypass.

Johnny, has your friend decided which of the two An Teallach summits he's going to compleat on?

Mantog, your decision definitely sounds like the right one in that wind. For me, conditions were pretty calm, just misty and drizzly. But you're spot on about not taking unecessary risks.

congratulations on the 100, simon

Congratulations on hitting the century and on such a magnificent mountain.I agree that it was a good call to bypass the pinnacles; I remember one of them being particularly tricky in the wet and in poor visibility you could easily have got stuck. Anyway, they'll certainly still be there if you fancy a return on a good day. Cheers

Thanks, rockhopper. Loch Ewe was superb, and there was enough good weather to make it a memorable stay.

Cheers, Gordon. Talking of milestones, I just had a look at your Wainwright map; I guess you did that winter Helvellyn walk with Dooterbang? If so, I'm to blame for that slog up Birkhouse Moor to get your first Wainwright! That was my suggestion on the forum, answering his question about routes involving Striding Edge.

simon-b wrote:
Cheers, Gordon. Talking of milestones, I just had a look at your Wainwright map; I guess you did that winter Helvellyn walk with Dooterbang? If so, I'm to blame for that slog up Birkhouse Moor to get your first Wainwright! That was my suggestion on the forum, answering his question about routes involving Striding Edge.

Ha, yes that walk was a cracking day out in fantastic weather. Striding Edge was good fun; remember a steep descent in darkness at the end of the Horseshoe before a very refreshing pint at the White Lion. Haven't been walking in England again since which is something I shouldn't take too long to rectify and I know who to ask when I'm looking for another big day out!

Hi Simon, not sure although i think he will go round clockwise.

Gordon, It'll be good to see you back.

Johnny, clockwise sounds like a good idea for compleating on An Teallach, then you get to finish with the higher Munro, the one that's nailed on to keep its status. Not that there's any threat of relegation for Sgurr Fionna.

Congratulations Simon a great acheivement, a good comon sense call to use the by pass. On my list of must do's but not sure if I have the bottle

L-Hiking wrote:Congratulations Simon a great acheivement, a good comon sense call to use the by pass. On my list of must do's but not sure if I have the bottle

Thanks, LH. I'm sure you'll manage to do this mountain one day.