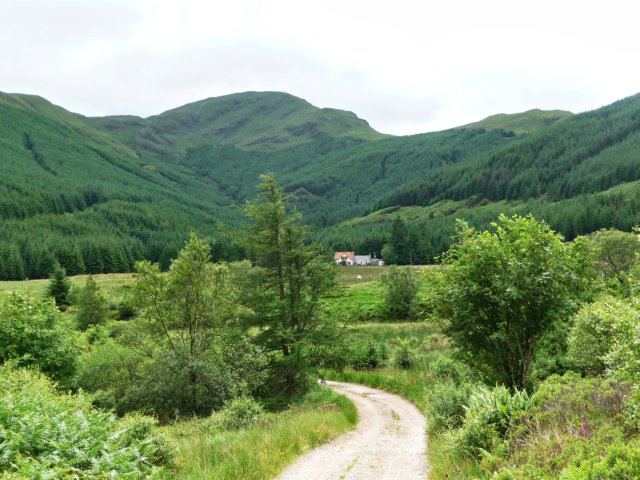 25 minutes after rolling the bike off the Western Ferry at Hunter's Quay I was at my start point of Corrachaive Farm off the B836 for my latest visit to the smaller hills of Argyll. After a very wet trip to Beinn Ruadh with Leonide on Saturday I was on my own for this midweek holiday special. 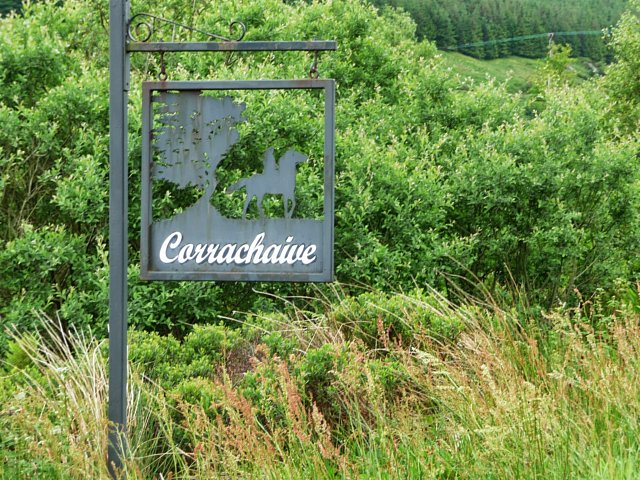 My route was to be a cycle up to the forestry at Corrachaive Glen where I would ditch my wheels and nip through the trees before popping out around Mid Hill and stroll over to check out the views from the peak. Simple. In my head.
The cycle part worked out perfectly well. 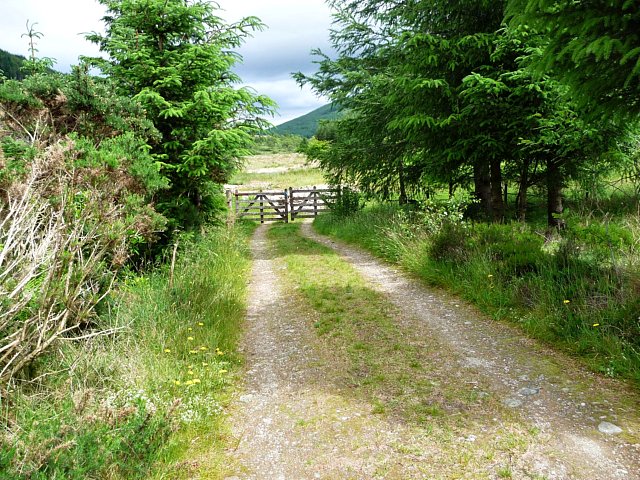 After quickly fording the burn at the start of the walk it was a straightforward pedal/ push all the way up a steadily steepening overgrown landrover track before ditching my steed at the beginning of the route into the conifers. A very small cairn marks the spot where you can turn off the track and head off into the trees. 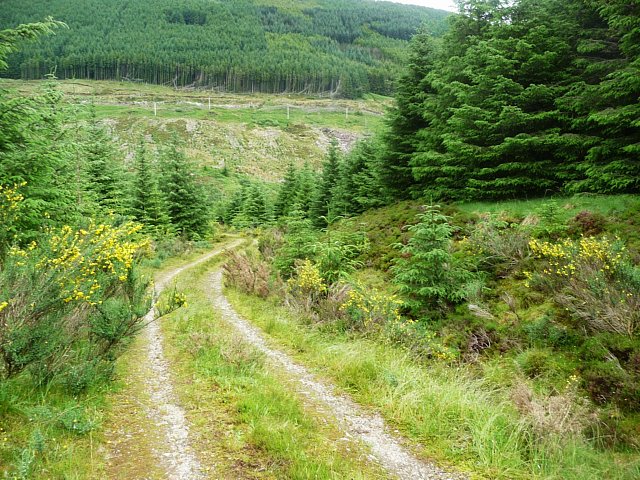 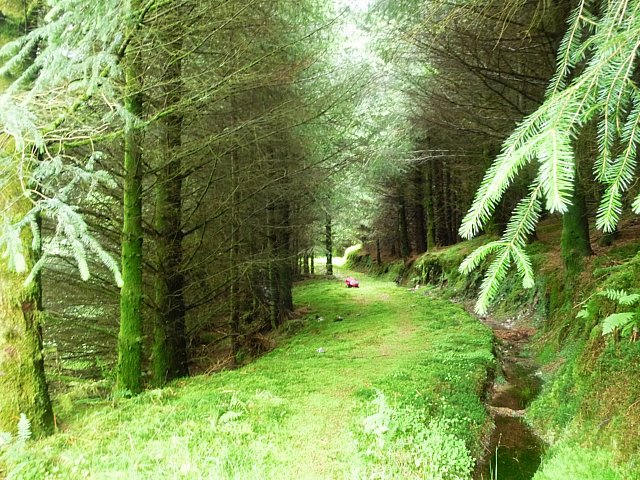 Ah, the conifers. Conifer plantations and hillwalkers should never cross paths. They are jaggy, they are dense and they are not designed for human transit. On more than one occasion I have had the experience of battling through them to emerge feeling like I have sledged through a gorse bush. When I was much younger I did just such a thing, the problem with conifer plantations though is you can't travel through them nearly as quickly. 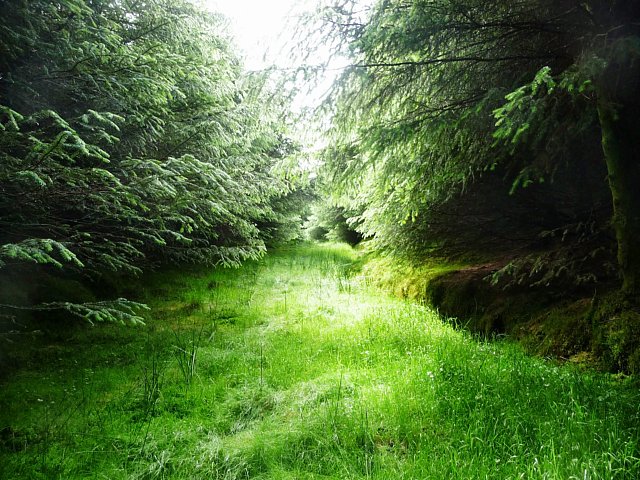 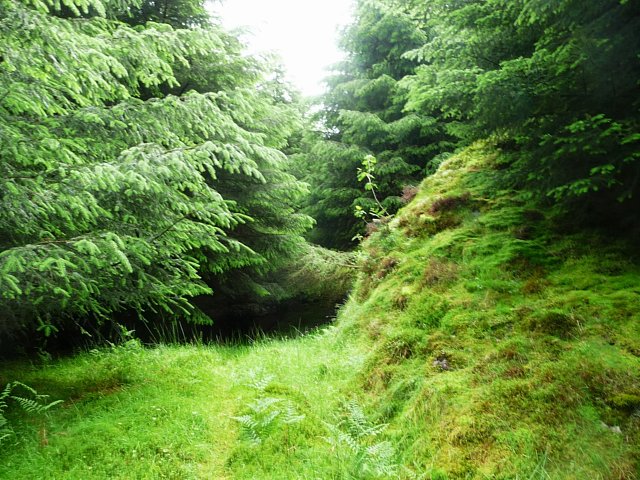 Looking at my GPS I thought I could see a relatively short section but actually the plantation was bigger than it had looked and after a promising start where there was a faint path that snaked its way up I soon found myself totally surrounded in increasingly thick coarse green stuff, boggy underfoot and no views to judge my progress. 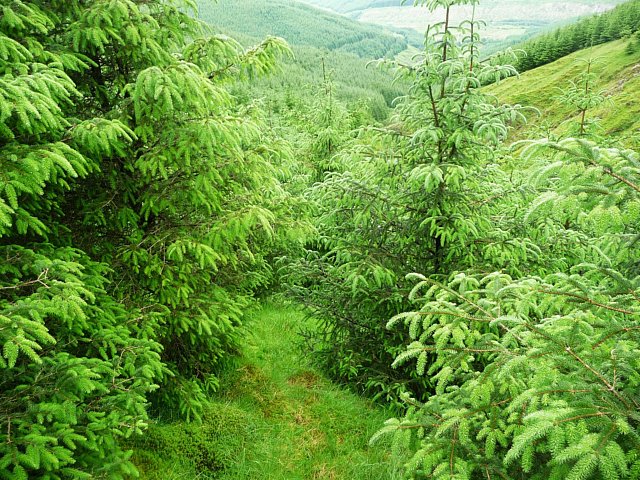 Things got fairly Bear Grylls-ish in my imagination for a while as I basically crawled along deer tracks dodging the conifer needles that were backcombing my bonce whilst doing my best to avoid deep boggy stuff underfoot. By the time I popped out close to a waterfall on the Corrachaive Burn I already knew that I would be concocting an alternative route back down from the summit. 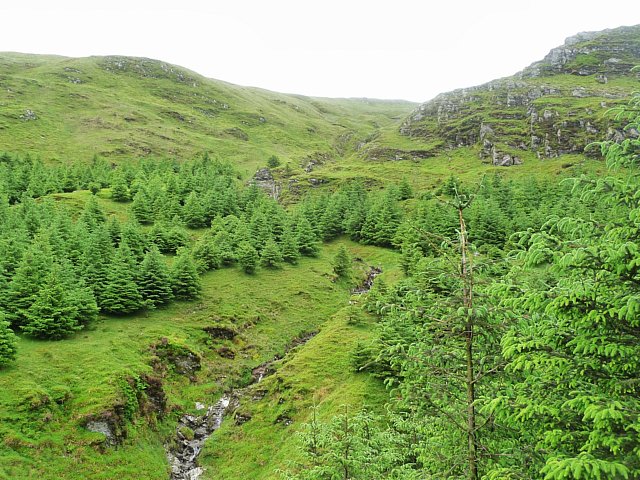 Up until now Cruach Nan Capull had been hidden by my trial by trees but now a direct route presented itself which involved a little scrambling up the steep wet slopes south of Corrachaive Glen. 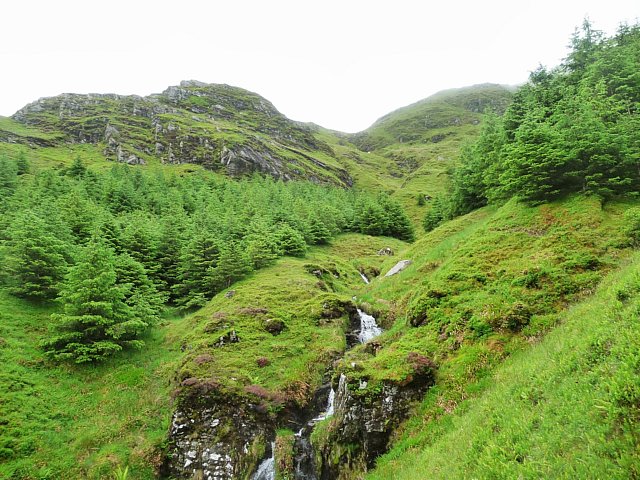 Leacann nan Gall on my left looked like an attractive hill but I was tiring and so pushed on to the top and followed the fenceline northwest to the summit. 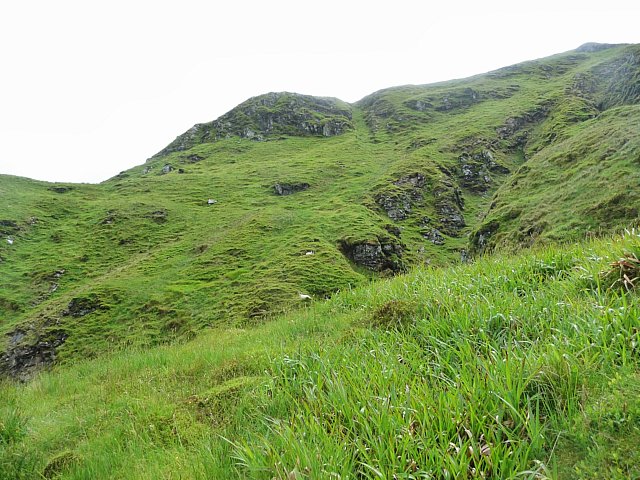 For all it felt like I had been in the trees for hours, I was on the top 1hour and 30 mins after arriving at the start point. Although the cloud line was low, it was good to take a breather and enjoy some fine views, particularly back towards Dunoon and the Clyde and over to Bute and Cumbrae. 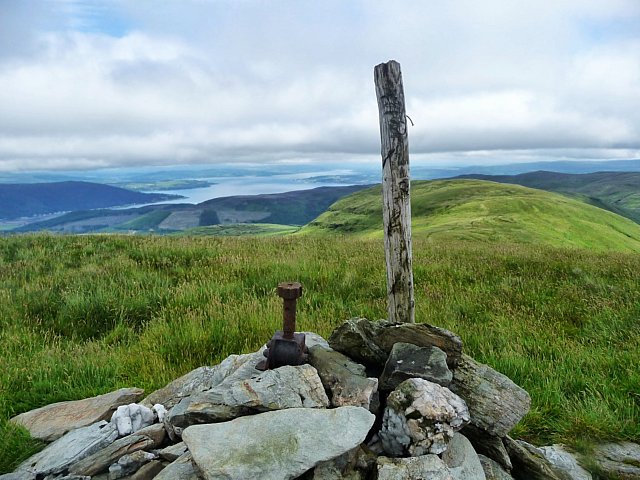 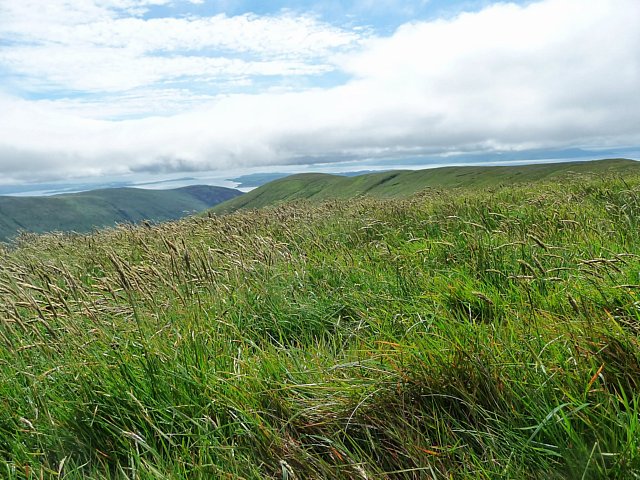 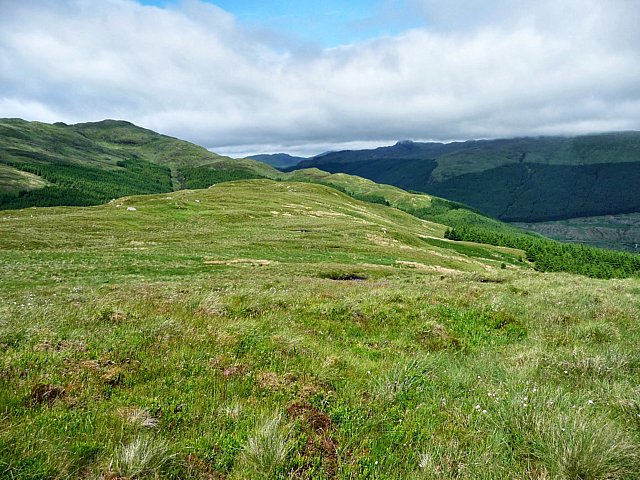 I decided to descend over Mid Hill staying above the conifer line and heading in the direction of the Neuran Burn. 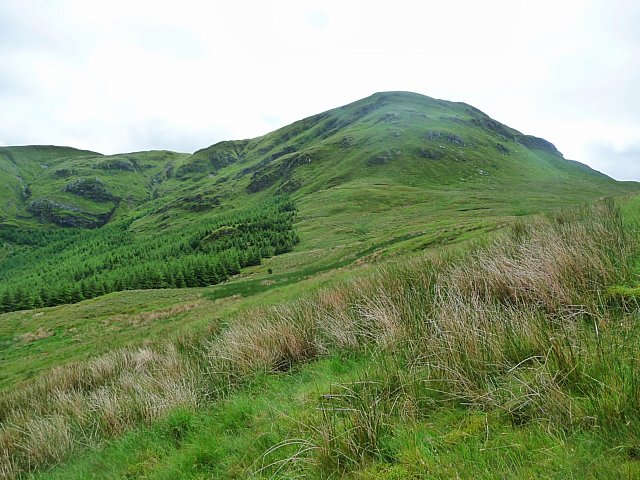 From there I would follow it back east before picking up the landrover track and my wheels which were stashed just off it. Piece of cake. In my head.
After a pleasant jaunt down to Mid Hill it became apparent that the break in the conifers on my GPS wasn't there in reality. 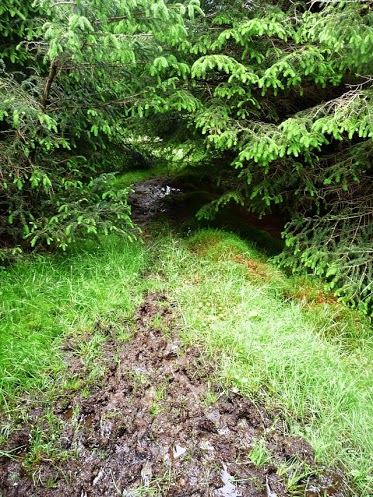 So, laughing in the face of cruel fate, I plunged back in to the dark, wet and jaggy depths of the plantation picking my way carefully in the direction of the burn. 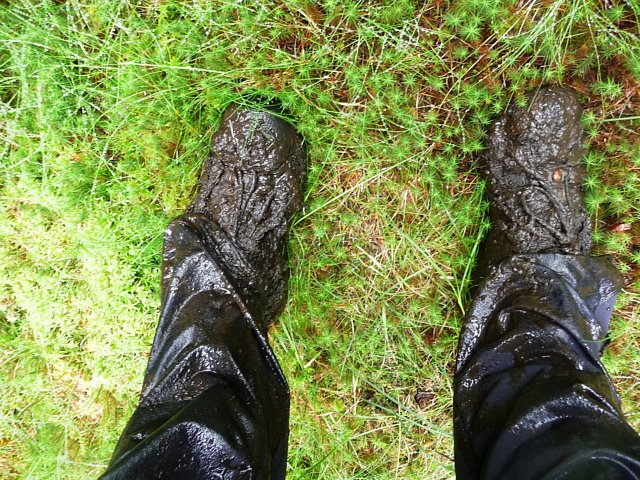 Bear Grylls would have shaken his head and retreated, 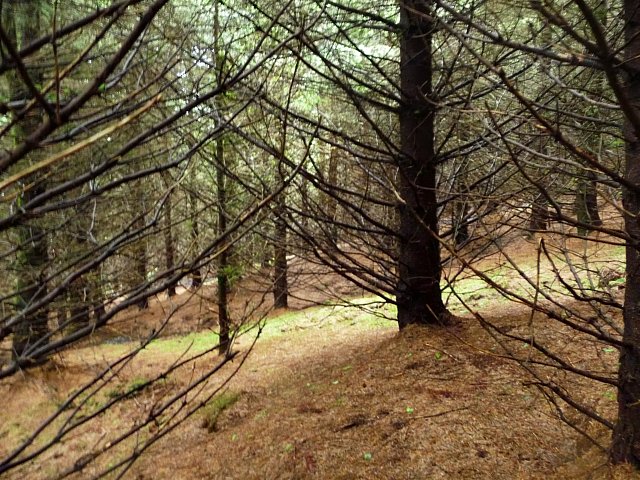 John Rambo would have reconsidered and perhaps descended via the glen, 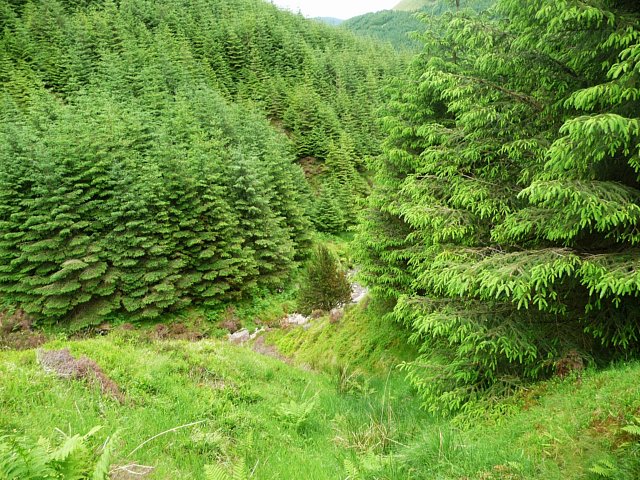 but I had a ferry to catch and I wanted to watch Wimbledon. 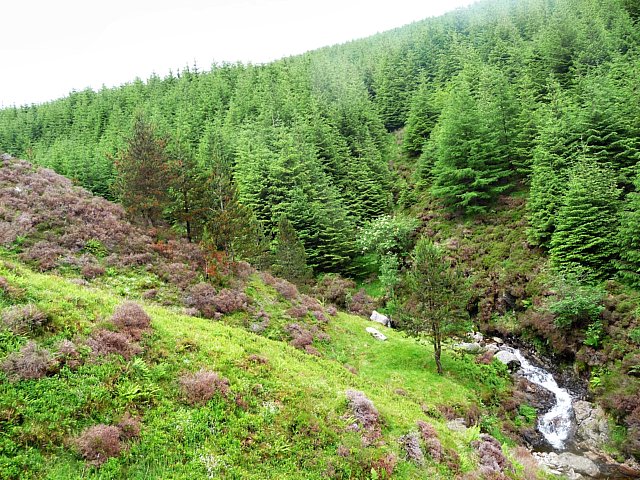 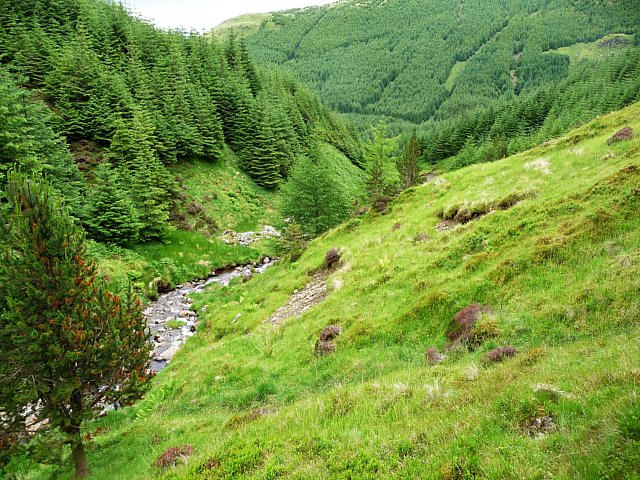 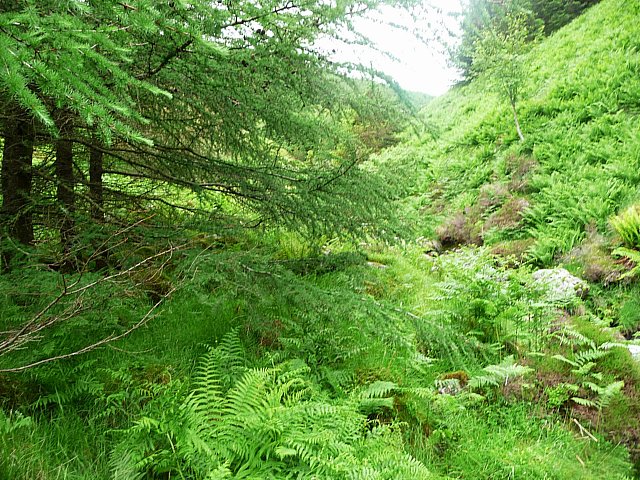 Once down by the burn the journey was pleasant and I enjoyed the views over to hills like Sgorach Mhor across the B836 and to Cruach Neuran looking back along the burn.
Eventually I caught a glimpse of the track ahead and with great pleasure I was back on easy terrain. 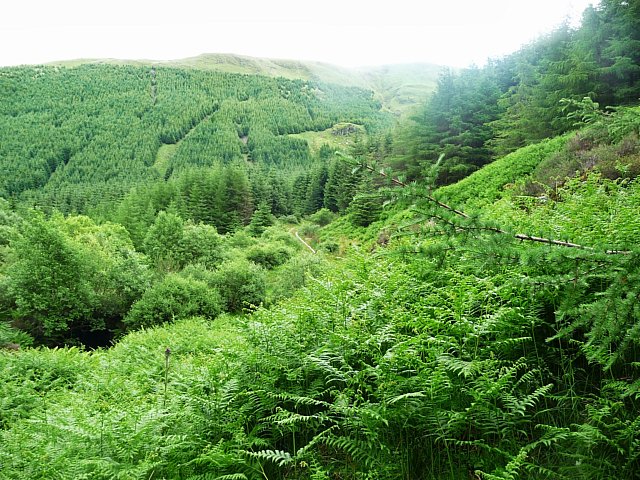 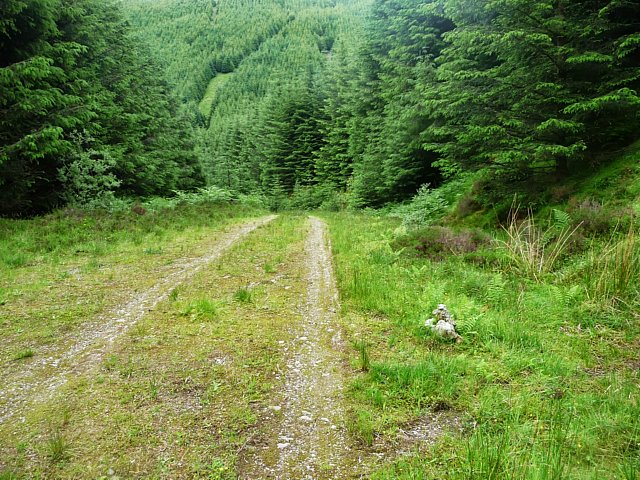 Once I got changed back into my bike gear the cycle down to the start point was an absolute breeze, downhill all the way, virtually no pedalling involved. It was quite a change from the Burmese jungle behind me. So that was that, another mini-adventure on a wee hill completed. Done and dusted in 3 hours. I would recommend this route to anyone who wants to get away from it all... and not come back: why bother with the heat of the French Foreign Legion when you can disappear amongst the conifers of Cruach nan Capull?

cruach_nan.gpx Open full screen  NB: Walkhighlands is not responsible for the accuracy of gpx files in users posts