A wise man we met on the Loch Lochy munros darkly joked that the technical term for a good day that comes after two bad ones is...Monday! But even in Scotland, the law of averages means that a long weekend and wall-to-wall sunshine must eventually coincide. In July. In the Cairngorms. OK, so it really was one of those rare occasions when the conditions were perfect for a really big day out in the hills and the Cairn Toul to Braeriach traverse was one we had been waiting a long time to do. 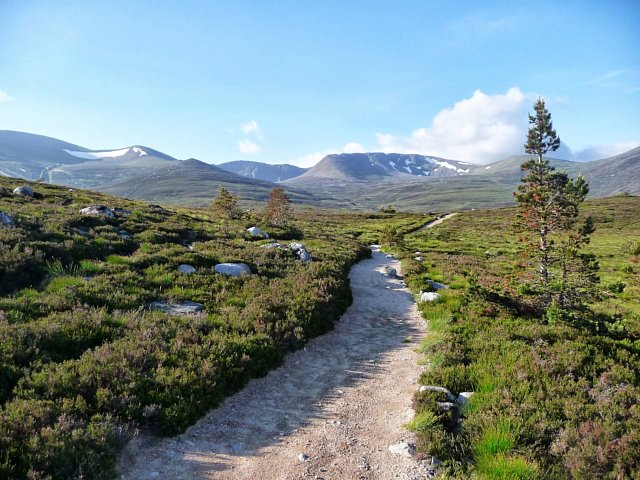 As we left the Sugar Bowl carpark and headed along the well-maintained path to the Chalamain Gap, warm gusts of wind gave us a summer buffeting but we had a spring in our step knowing we had a big, bonnie day ahead of us. The walk-in gave a chance for the muscles to warm up and in no time we were through the eerie boulder field and soaking up the views of the wide open expanse ahead. 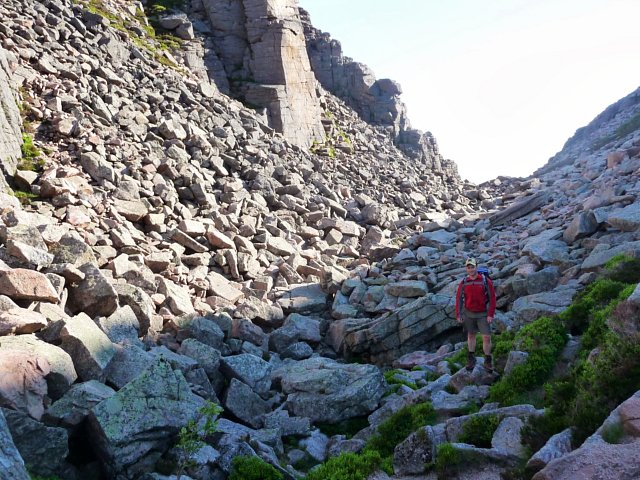 We followed the steadily sloping path from the side of Creag a Chalamain down to the Larig Ghru where the magic of the walk really begins. 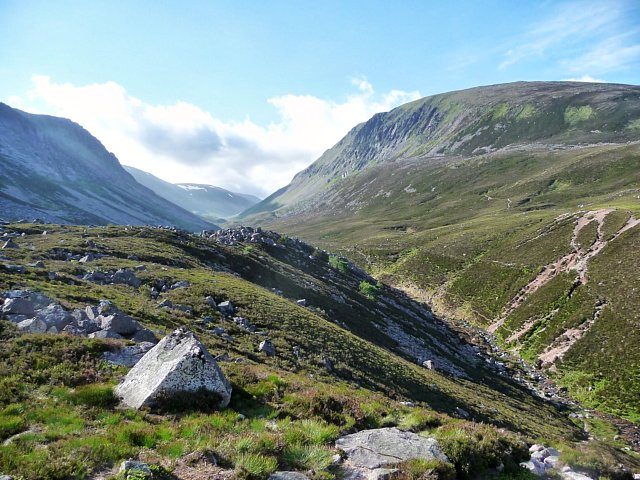 descend to the Allt Druidh and the views get better! 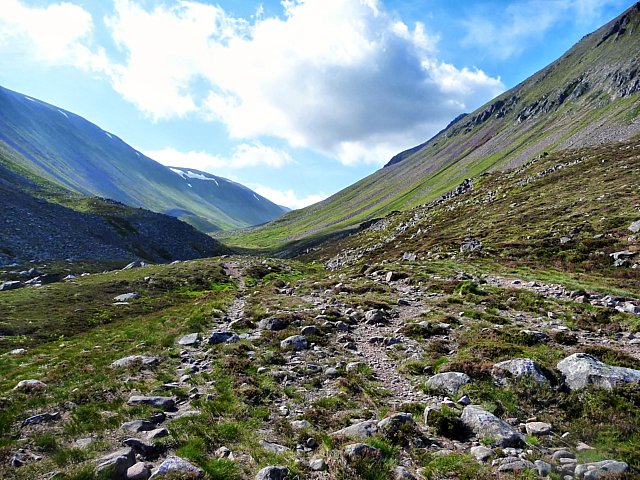 Viewed from the A9 these hills look uniformly featureless, blandly pudding-like and frankly rather dull. They give no hints of the beauty and grandeur that lies within which is something I like about them. That sense of epic beauty is superbly apparent in the Larig Ghru. This grand defile is just a pleasure to walk 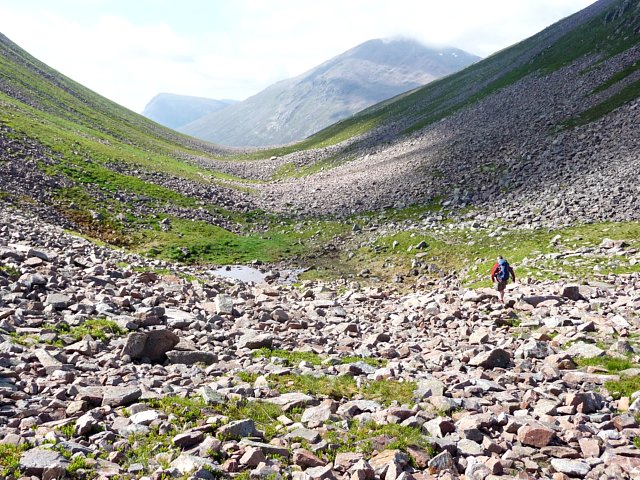 Our route choice was to traverse over the munros on the way back which meant walking into the mighty wind being funnelled between the Cairn Gorm and Braeriach massifs. The scale of this area is genuinely awesome and as we walked further the views continued to improve 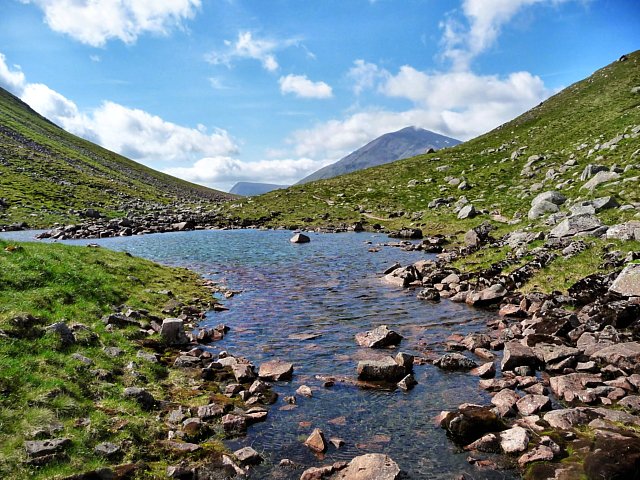 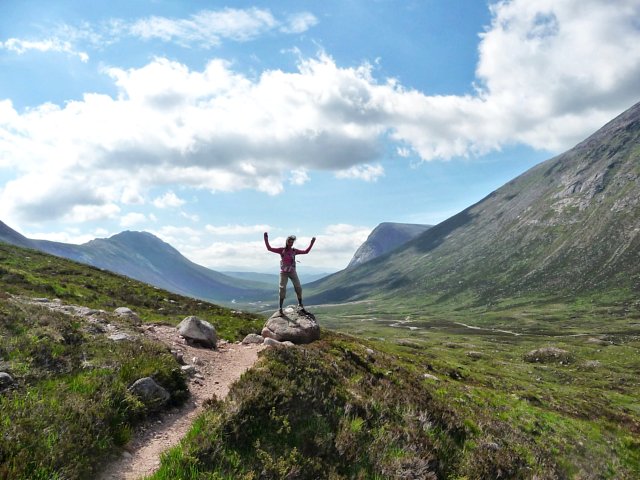 Passing the Pools of Dee the Devil’s Point appeared on the horizon and soon we were passing the great expanse of Baeriach on our right hand side. From our perspective the grand cliffs looked huge, outlining our route home. Eventually a white speck in the distance became Corrour Bothy, a way marker that beckons walkers over the bridge and onto the lower slopes of the Devil’s Point. 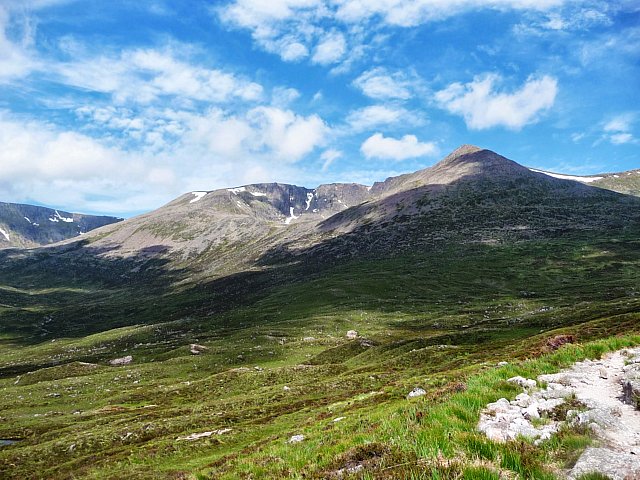 Braeriach basking in the sunshine 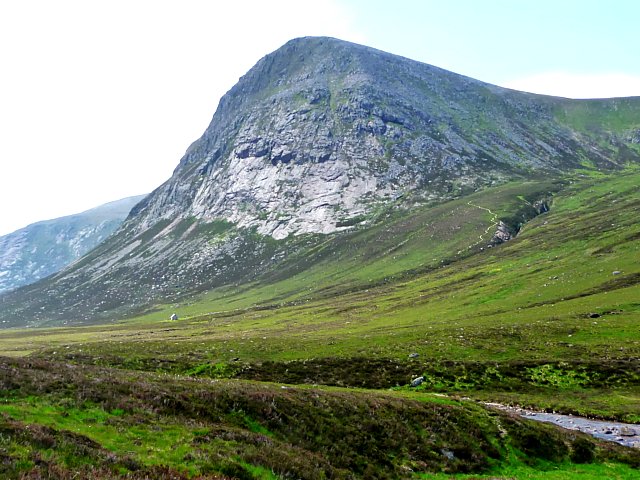 . Before we crossed the river, Leonide was startled by an aggressive dog which pounced on her and would have taken a chunk out of her had it not been muzzled. Immediately this put her into fight or flight mode and as an animal lover, not an animal fighter, she fairly rocketed passed the bothy and up the saddle of An Diolland. I followed, puffing and peching in the heat. 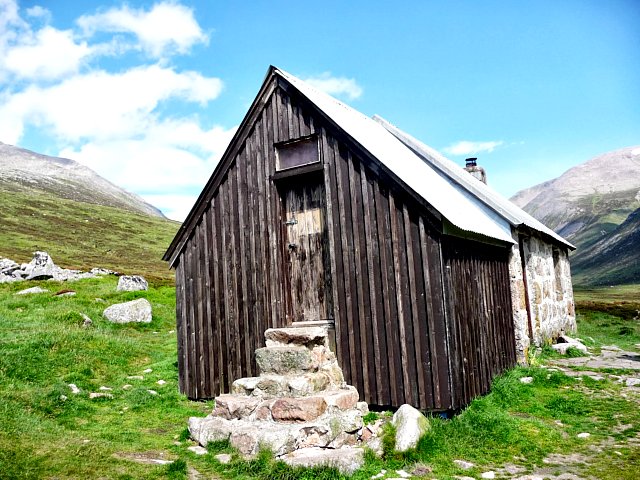 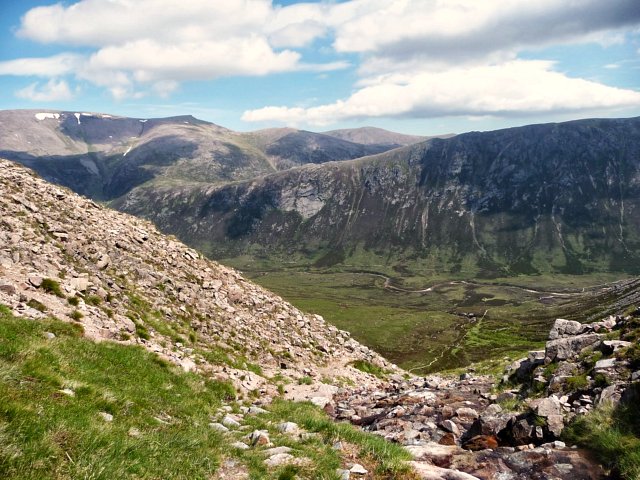 over to Derry Cairngorm...and beyond! 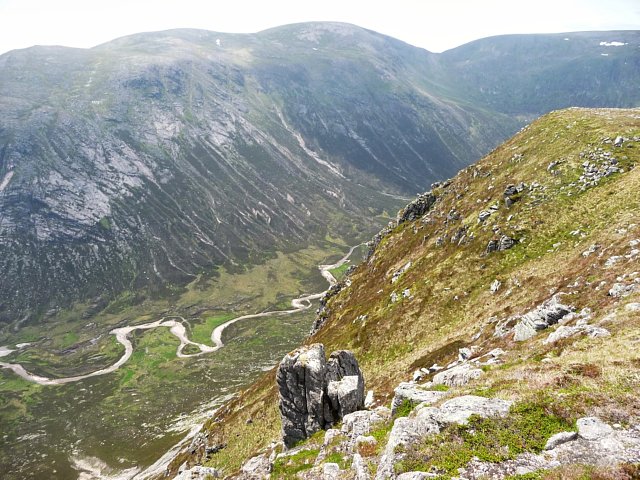 I can’t think of another pastime that would allow you to comment on the view from atop the devil’s penis but hillwalking does and I can confirm the panoramas are stunning! Bod an Dheamhain, to use the Gaelic name of the hill, is a great place to be on a fine summer’s day. After the long walk along the Larig Ghru and the pull to the summit it was good to simply breathe it all in. Glen Dee opens up in one direction and Cairn Toul looks huge in the other. To the east, a walk along the ridge of Carn a Mhaim looked like one to put on the to-do list and the rocky summit of Derry Cairngorm is prominent to the north-east. What a place! 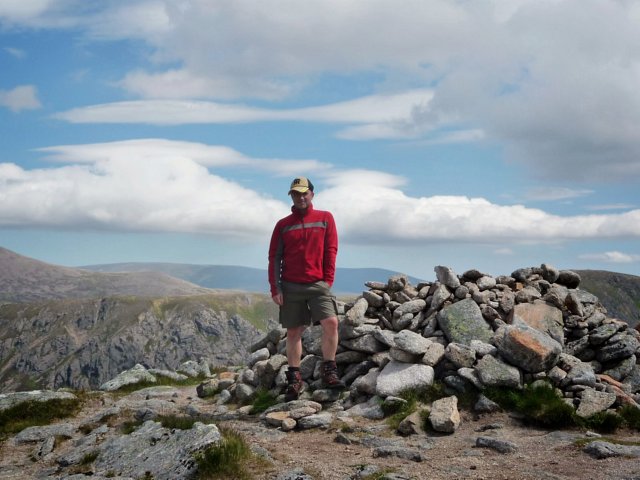 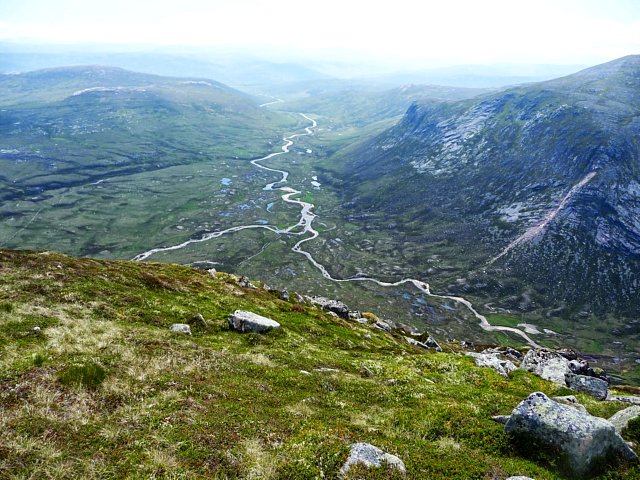 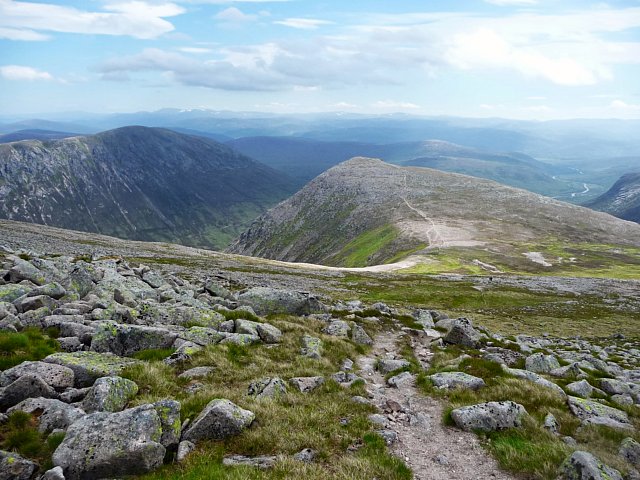 Carn a Mhaim over on the left

I know that these hills were once known as Am Monadh Ruadh, the red hills, but I was struck at how green the eastern cliffs of Cairn Toul were as we made our way along the top of Coire an t-Saighdeir. Given that the hills are known by the collective term deriving from Cairn Gorm, the blue hill, I liked the enigma of a peak that can be both red, green and blue at the same time. 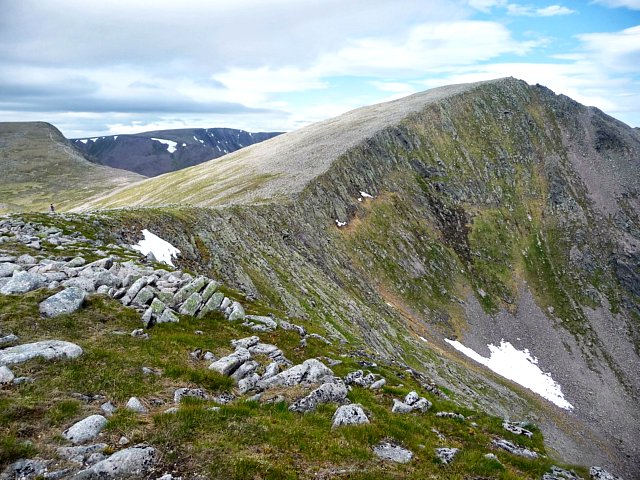 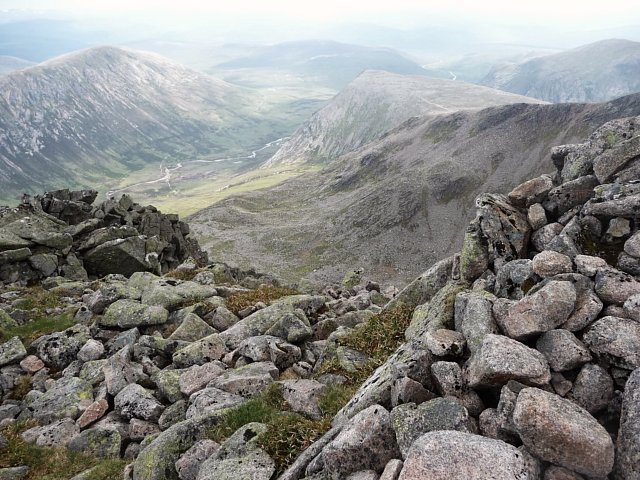 At a height of 1291m the views from the 4th highest summit in Scotland are fantastic with Lochan Uaine and Sgor an Lochan Uaine mapping out the next stage of the traverse home. 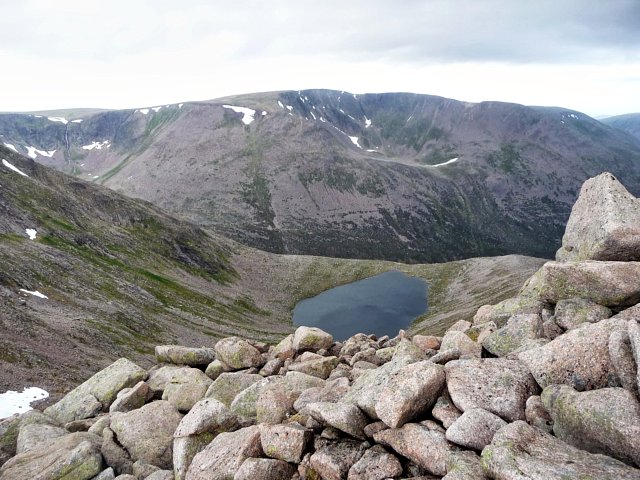 from the Angel's Peak

We were keen to keep a steady pace with some darker clouds appearing from the south west so we quickly made the short descent and re ascent over to munro number 3 of the day. The descent over the boulders from Cairn Toul was a bit tricky and I nearly took a tumble on a couple of occasions.From the airy viewpoint of the summit we could see in much greater detail the cliffs and corries of Braeriach that we had been admiring from the Larig Ghru earlier on.The views reinforce the sense of vastness of the place. 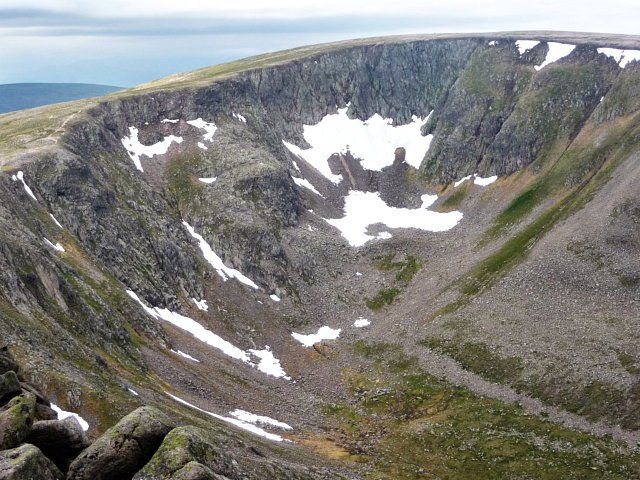 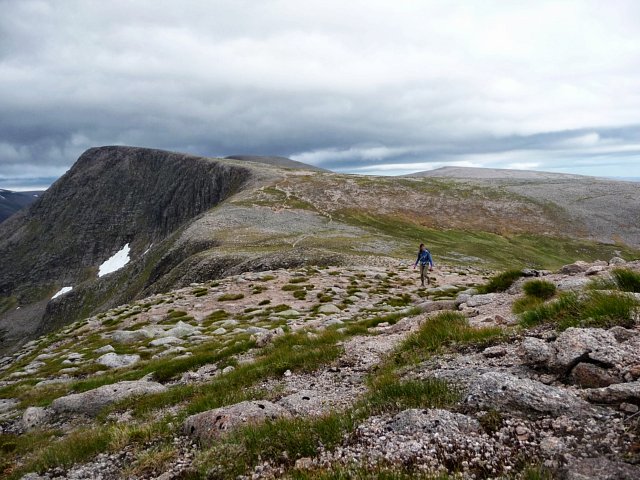 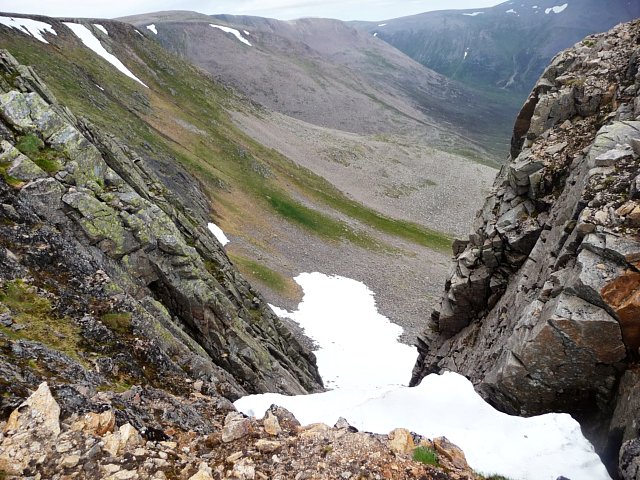 Braeriach is a complex hill which would require very careful routefinding in clag, not a place I would like to find myself in bad weather. 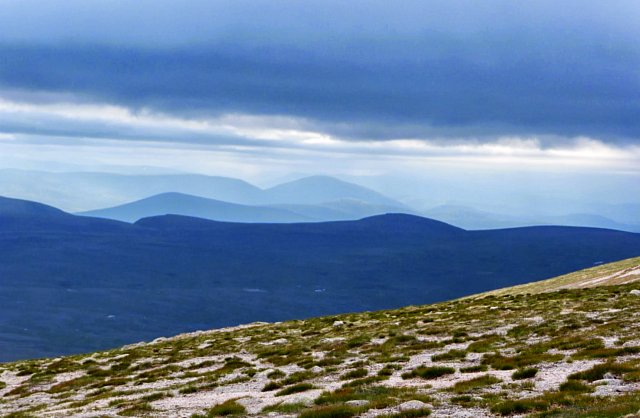 The plateau of Braeriach is a massive space, windswept and barren. Some pockets of snow still lay in the upper reaches of the corries as we passed to the top.The summit is perched beside the cliffs of Coire Bhrocain and by the time we reached it, clouds were beginning to bunch up behind us and my feet were calling for mercy. 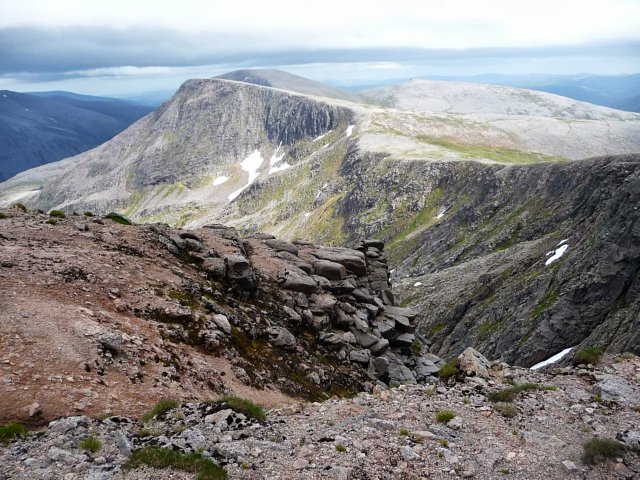 looking back at the traverse 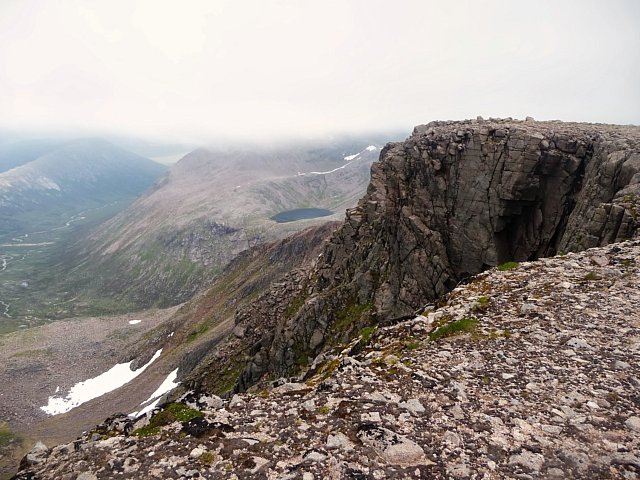 So began our walk back to the Larig Ghru and the Chalamain Gap. As we walked the call for mercy, became a cry which graduated to a roar. I had to stop a few times on the path down from Sron na Larige to give my plates of meat a breather. Leonide took my mind off the k's that we still had to travel by throwing cocktail sausages at me. 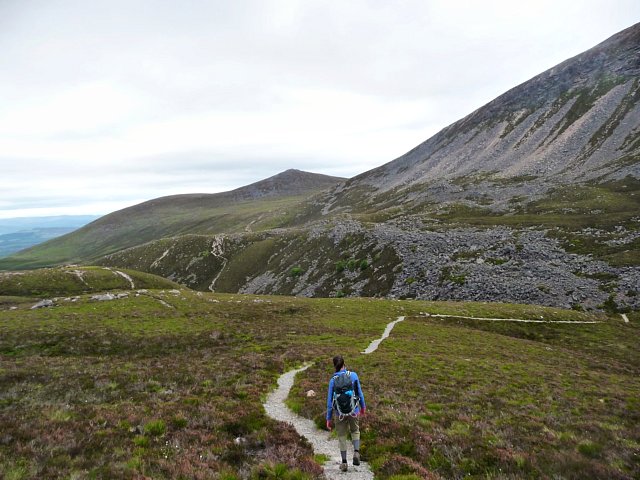 the long walk home, Creag a Chalamain in the middle

In the interests of adding even more interest to our day we decided to nip over the 787m top of Creag a Chalamain rather then go through the gap again. A clear path deposited us at the summit in no time and looking back towards Braeriach we could see how quickly and how far the cloud level had dropped. We had definitely made the most of our weather window of opportunity. As we retraced our steps, a weary hobble replacing the jaunty stride form that morning , I reckoned that this was one of my favourite walks to date. It's a true epic in a stunning part of the country. And we got great weather for it. It's great when the law of averages work out.

This is how I want to do this route, but in reverse. I want to do it in the same conditions so going by the law of averages that should be years away yet

Big route but enjoyable in those conditions.

Well done guys and keep the adventures rolling along.

Excellent, Gordon! You took full advantage of the weather to get some great pictures, as well as having an epic walk. This was route was my second Munro walk (but omitting Devil's Point and returning through Chalamain Gap); it was a real "Welcome to the Highlands" in rain and clag. I'm hoping to bag Bod an Dheamhain among others when I stay in Braemar the week after next.

It's nice to see the Monadh Ruadh under blue skies!

This is how I want to do this route, but in reverse. I want to do it in the same conditions so going by the law of averages that should be years away yet

Well done guys and keep the adventures rolling along.

Aye, Mr P, the webbed feet were in tatters

"We shall not cease from exploration/ And the end of all our exploring/ Will be to arrive back where we started/ And know the place for the first time." So says T.S. Eliot in a book I've just finished. Sure we'll bump into you and KFC on a future sunny adventure.

simon-b wrote:Excellent, Gordon! You took full advantage of the weather to get some great pictures, as well as having an epic walk. This was route was my second Munro walk (but omitting Devil's Point and returning through Chalamain Gap); it was a real "Welcome to the Highlands" in rain and clag. I'm hoping to bag Bod an Dheamhain among others when I stay in Braemar the week after next.

It's nice to see the Monadh Ruadh under blue skies!

Cheers Simon, Braemar will be my next base for more explorations in the Monadh Ruadh, may the sun shine for you; look forward to reading all about your trips

Nice report. I did this traverse in similar conditions 11 years ago on the 2nd attempt after poor weather encouraged us to turn back the first time. We had a car at either end and went Braeriach to Devil's Point then out to Linn of Dee. I am hoping to take my granddaughter through the Lairig Ghru in August taking in the Devil's Point and possibly Cairn Toul and Sgurr an Lochain. We are stopping at Corrour or nearby overnight. I hope the weather stays good.