The day started off well (apart from the fact that the wee road off the A93 to Auchavan had been closed and a small detour was needed): the sun was already shining and the clouds were soft fluffy cumulus and on arrival we jiggled our way down the heavily potholed single track road to the riverside and a nice new bridge. Sunlight glinting off the River Isla .
We decided to follow the path alongside the river - a public right of way - as it avoided climbing back up to the "village" and then heading North again. It was quite overgrown but much quicker and we were soon onto the wide road heading to Tulchan Lodge and beyond. It's a good walk of about 3-3.5km till you reach the foot of Monega and gets the muscles well loosened up and the lungs starting to work. About half way along we stopped for first breakfast at the bridge and a moment by the burn, getting a proper look at our first hill. 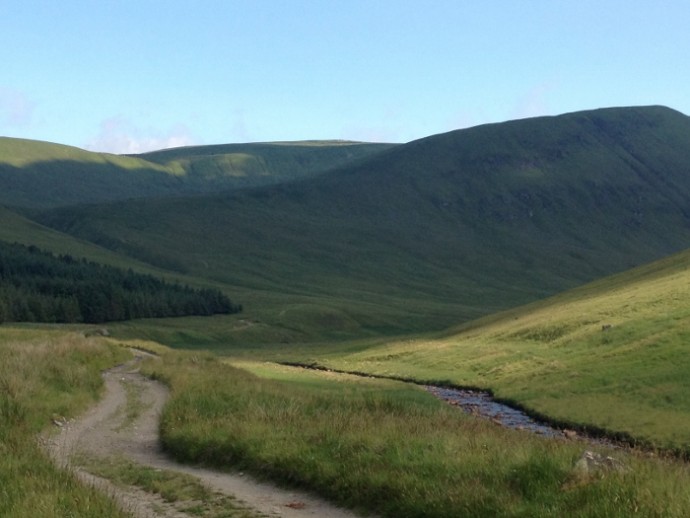 In full view now, Monega Hill - first of the day

A wee old man appeared on his bike a few moments later complete with hi vis vest and I really thought he was going all the way up the Glen, maybe even up Glas Maol, but no. After the usual good morning, he said to Martin , tucking into a Scotch Egg, "is that your lunch you're having?" and added without taking a breath, "I always come to here and go back again. I live nearby". With that he turned round and cycled back the way he had come. Thereafter this bridge was to be known as "Scotch Egg" bridge although then we didn't know it would acquire this name.

Tulchan Lodge outside of which is the bridge is very heavily signposted as Private and indicating the only official path to Monega as alongside the river. The forest is surrounded by an electric fence which was on and we could hear the periodic discharges of static. We didn't really think that it seemed odd to protect a forest with an electric fence at the time. It is odd but we thought nothing of it.

We continued along the path spotting a few deer racing down the opposite hillside at a speed which left us in awe. Anyhow we soon reached the end of the electrified forest and although there is a signpost pointing vaguely across the patch of grassy hillside, there is really no path or even signs of a path.
On we went heading gradually uphill towards the more obvious grassy path on the far hillside. Once there, the first bit of hard work of the day began and the sun began to beat down upon us ever more strongly, causing us to stop regularly. The hill is not actually that steep and is more scary-looking at a distance than it is once you engage with it. The by turns rough grassy/ stony path heads carefully uphill. We got a glimpse of our final munro of the day. An early look at Creag Leacach

There are three cairns before you reach the top and result in the usual degrees of false hope but once there the views are magnificent.

As we arrived there was a thundering of hooves and an entire herd of wild deer appeared from nowhere making one of the most spectacular sights I've ever seen on the hills, surpassing last year's sheep herding on Ben Lawers by a mile. Here's a link to the video:

We couldn't figure out how they came up this: The steep East side of Monega hill which was impressive in itself. We didn't bother visiting the summit of LGM as we still had loads to do and headed on up to Glas Maol itself. 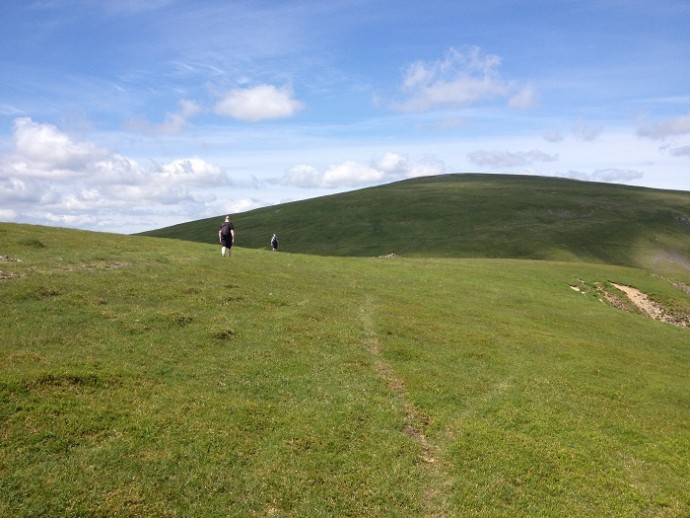 Heading up to Glas Maol

We were so busy following the path that we missed the grassy turn off that would lead us straight up to Glas Maol and took a slight detour but thankfully only a short one. Getting to the summit felt like a walk in the park and although it's 1068m high the worst of it had been getting up Monega! We had seen almost no one the entire day so far apart from the old cyclist and one other walker who was moving at a fair pace and passed us without saying a word. Once on Glas Maol, it began to feel a bit like Sauchiehall Street as several pairs of walkers appeared from the North West ie the Glenshee approach, all of whom decided to sit apart from us - is it something we said? Those clouds were ominous - I had never seen them actually hugging the hillsides like that before - creeping gradually towards us and they looked like they could be rain bearing. We headed on to our second munro of the day, the stony topped mountain to the south. Clouds rolling in like waves over the eastern hills

The way down to the cairn on the ridge is easy walking across grass with the occasional rock but Martin said to me it sounded exactly like we were walking on plastic (it did): the ground had become so dry that the normally damp mossy underlayer had dried out and crackled with every step. Heather Morning had written a piece recently, warning about the perils of toilet paper self-combusting with the heat and dryness. I know exactly how that could happen as the ground was tinder - dry. Once we reached the wall we headed alongside alternating between East and West side depending on how rocky it was. Eventually we could avoid the rocks no more: 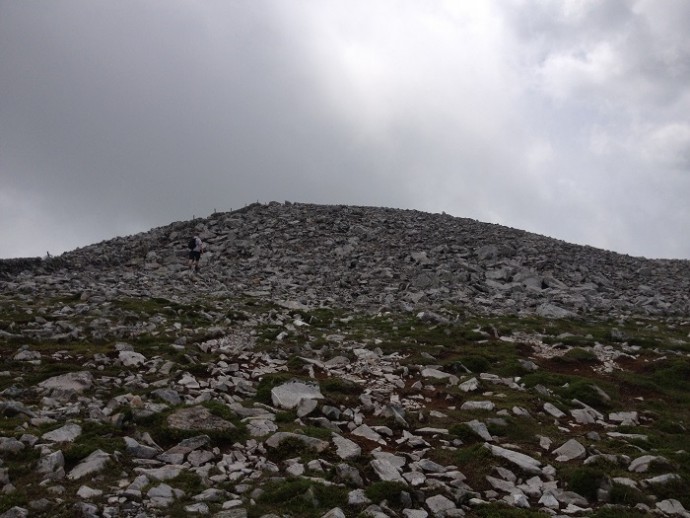 Despite it's apparent visual difficulty, it is an easy hill to climb once you suss the rocks and actually nearer to the wall the going is easier (although much less fun but you are also less at risk from broken ankles!) As we reached the cairn, we were joined by two of the Glenshee walkers we had passed a while back just as the cloud rolled around us. The top of Creag Leacach and the cloud

The lady seemed a bit concerned by the cloud and I helped the gentleman with his planned route which was to be down to the South Top and then down to Meall Gorm and then the long walk back to Glenshee along the road. His map was a tourist board affair with little detail and I was a little worried that he might get lost in the mist so I suggested they head back the way they had come. They seemed properly dressed for walking just no map and as I know from personal experience that is potentially dangerous. Anyway we headed on, now on the homeward stretch, even although we had a number of kms to cover yet.

Despite my map and compass I managed to take the WH shortcut before the 943m top rather than after and we ended up heading down the steep (very steep) eastern side of the hill. Stop! Check the map! We reset our bearings and headed for the Fashilloch Burn junction where we knew the fenceposts would guide us back up to the bealach before Mallrenheskein Hill. Which we and it did. Isn't it good when a plan comes together. Big thanks to Heather Morning and the MCofS Navigation course I had been on - it works!

There are no pictures now as the battery was low and I reckoned I needed it for emergencies - well just in case! We got to the top in jig time and as we headed down, Martin told us he had hurt his leg on the way down Creag Leacach and didn't feel able to continue up the Black Hill now emerging coyly from the cloud and looking bigger than it was, and so we once again resorted to the map to set a new course down through Glen Brightly. The way down from the Easter Glacanbuidhe at Pt 681 is striped with new ditches exposing deep trenches of peat but which were quite dry generally and after a wee while reached Glenbrightly burn. It was with great joy that we found it to be filled with clean fast flowing water as we had all of us just about run out of water. The cloud had been strangely warm and not the usual cold damp Scottish cloud we were used to it was more of a warm steam than anything else and accounted for us running out of water so quickly. We were well below it now in the glen and with a clear view of our route ahead of us.

We headed on down the glen following first the rough path and then on to the ATV path and down to the forest at Tulchan Lodge that would eventually lead us back to Scotch Egg Bridge. On arrival at the gate into the forest we stopped dead in our tracks. A large "Private" sign met us, together with more electrified fence and an attachment on top of the gate which seemed designed to prevent it being climbed. Whoever was in Tulchan Lodge had never heard of the right to roam. Do they think walkers are untidy litter louts or vandals? Do they think we care who lives there? We just wanted to walk quickly down to the road with our injured walker. So although we discussed just taking a chance, we decided to obey the rules and headed South towards the burn across some more rough ground and down to an Indiana Jones style bridge, suspended about 12 feet above a raging torrent by two wire ropes but thankfully with boards to walk on. The bridge bounced and swayed as we each crossed nervously. Had we had the time or inclination or battery power, there is a really nice photograph upstream to the outfall from another gorge.

Over we went and up the hillside and then followed the fenceline down for 1.3km to the road. Dogs were heard barking from inside the secret lodge so maybe it was best to have avoided it. Once we emerged onto the road about .25km along from Scotch Egg Bridge, it was an easy 2k back to the car albeit tedious. But what an amazing day even if not what was planned!