This was a fairly last minute decision to go for my first Corbett - I had said the first one might be this year, but it wasn't supposed to be Ben Vrackie. But there I was, with the first really good weather forecast of the year for the coming weekend, and dancing at Perth Farmers' market on Saturday morning.

Q1. Where can I go from there with a youth hostel?
A. Pitlochry.
Q2. What can I do in Pitlochry?
A. Climb Ben Vrackie.

So that's what I did.

On Saturday evening I'd only had time for a quick trip, getting the bus up to Killiecrankie and wandering back, but now I had almost a whole day to play with.

After a bit of pottering around, going to the co-op, and waiting for the bakers to open for breakfast, and then a large number of German bikers to be served, I headed up to Moulin and the start of the path. There's a lot of uphill in Pitlochry. I'm not sure why this should matter when I'm going to climb a big hill at the top of it, but somehow it's worse in streets.

Moulin looks almost too picturesque for its own good, with black and white houses and hotel and a tiny green and old church with a bell and a crusader's tombstone in the graveyard - but it seemed surprising quiet given its proximity to bus-tour Pitlochry. Maybe bus tour people don't walk uphill. 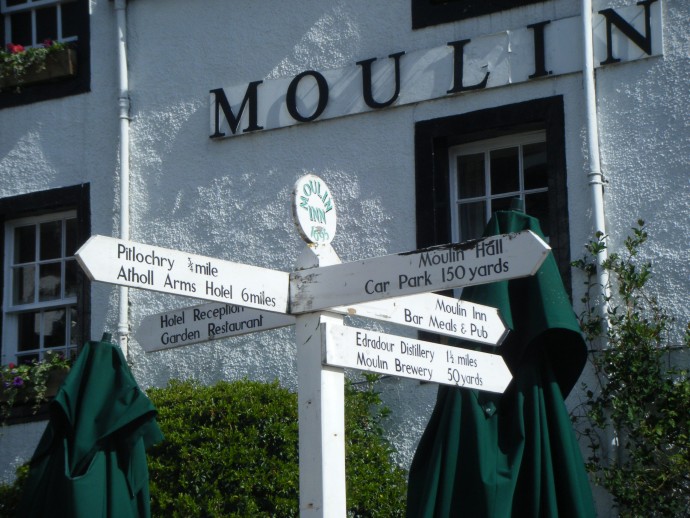 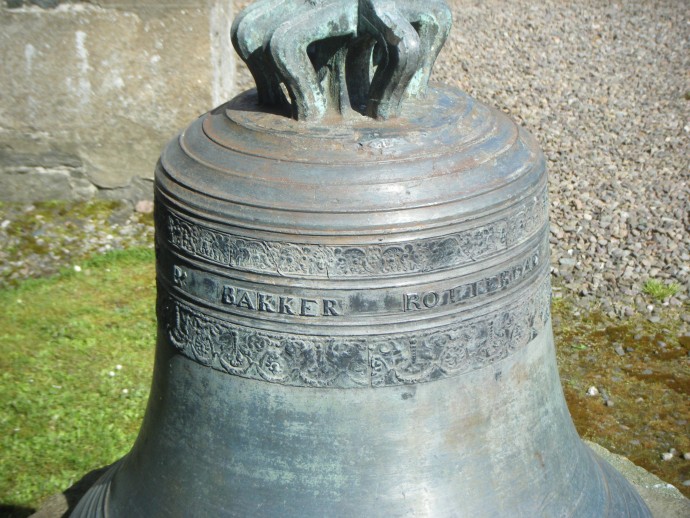 From there it was a walk of three parts - first woodland, all very pleasant and Perthshire, and then a broad path over heather moorland - dry and well made and good walking. It was sunny and warm - a bit too sunny, because I'd forgotten my hat, and forgotten all about suncream until I met a couple putting some on - they very kindly shared! 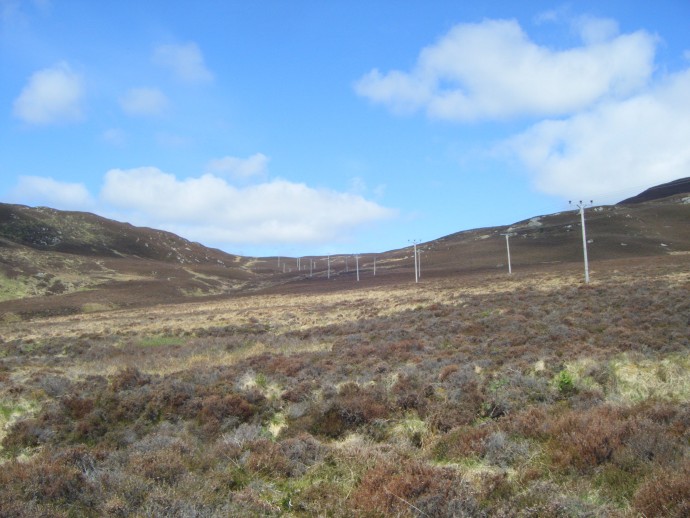 After a while the Lomond Hills appeared above the horizon, looking much the same as they do from Edinburgh, only backwards. I don't know why this should surprise me, but it did a bit...

It was clear from the start of the walk that the worst was to come towards the end. At least it's always fairly obvious what lies ahead! 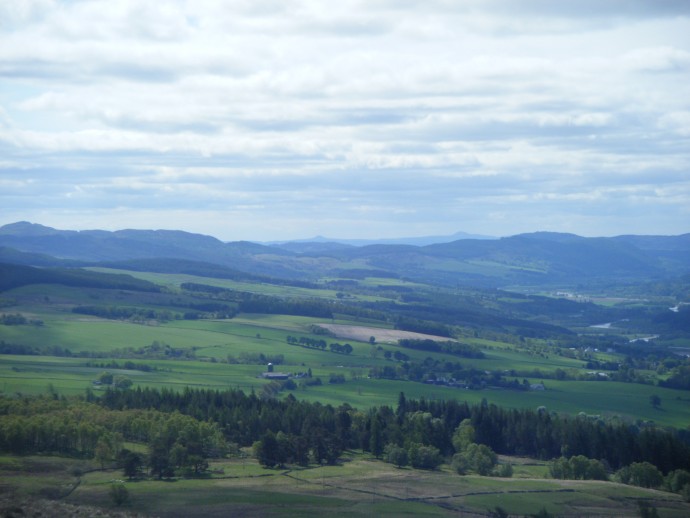 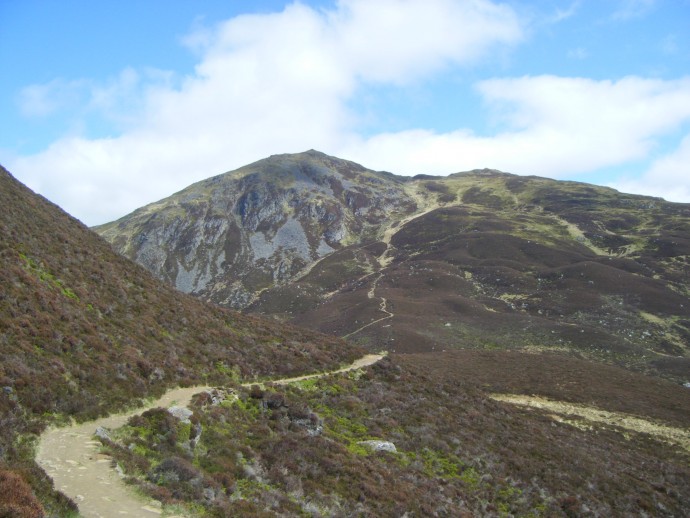 From here, endless stone steps. And a fancy twisty stone, and some worn out bits where people didn't like the steps, and more steps. And more steps. It was getting fairly busy with people coming down, or maybe there just seemed to be more now because I was going against the flow. 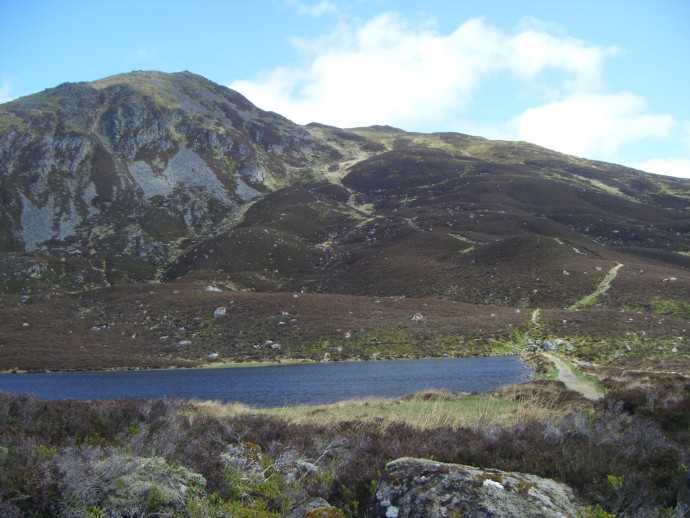 The view from the top was worth it all. I met again the couple who had given me the sunscreen, and a man who was unwilling to acknowledge the existence of anything except the summit cairn, but really it was all about the hills. In spite of all the famous names in the distance, my favourite view was the fairly nearby one north to Beinn a'Ghlo, all twisty ridges and clearcut slopes. 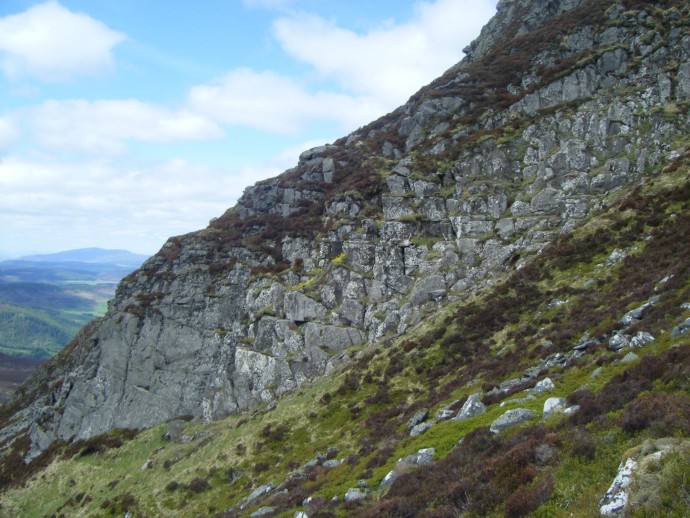 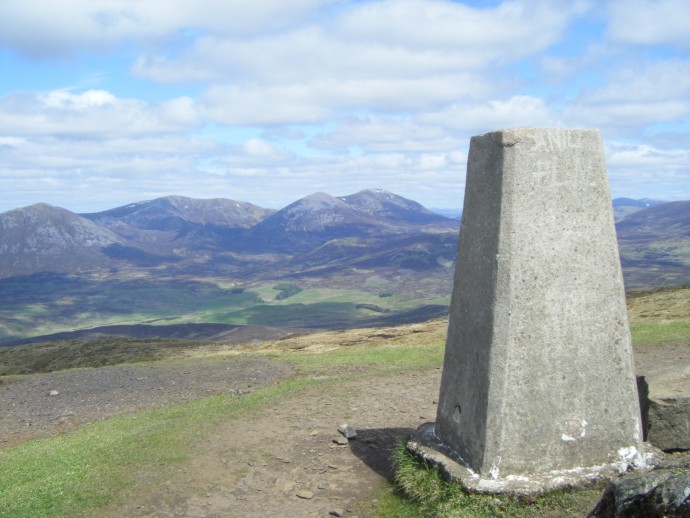 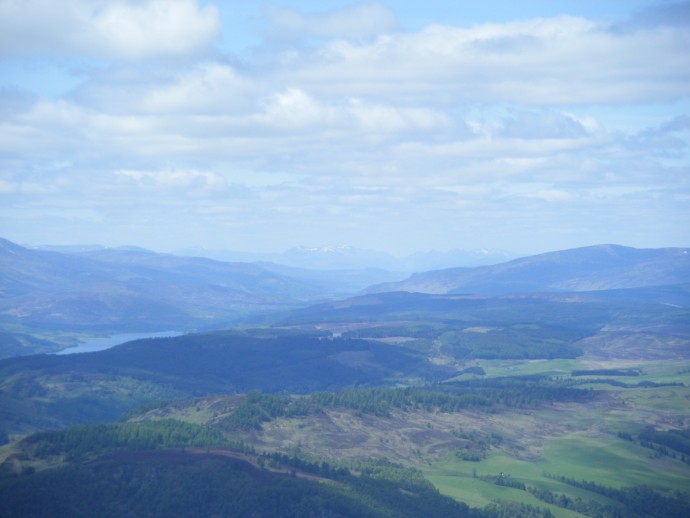 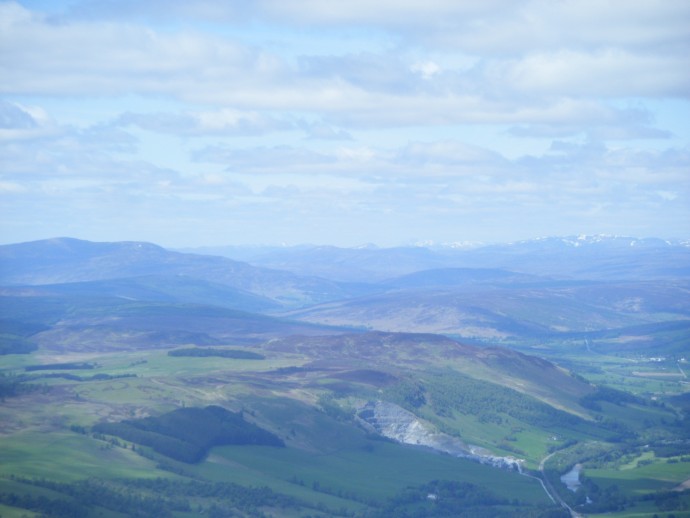 According to the indicator, one of the most distant things visible was Arthur's Seat, 59 miles away, but I couldn't pick it out of the haze - although there was a very hazy skyline behind the Lomond Hills that must have been even further. 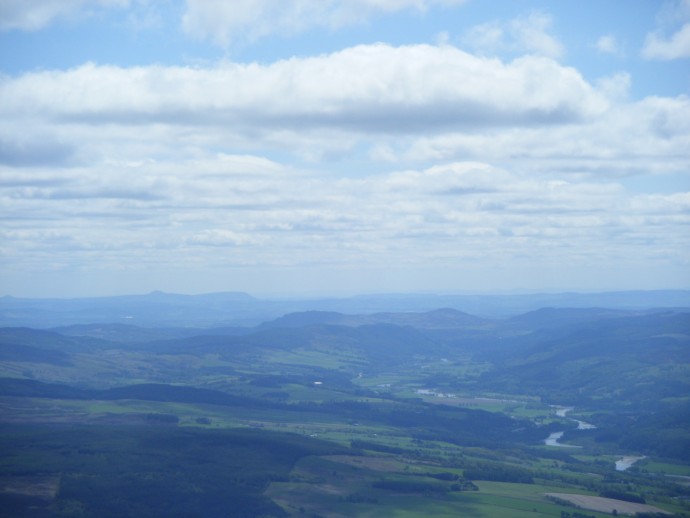 It was definitely getting busy going down. I had always meant to go around the other side of the loch, and I'd had a vague idea of getting back to Killiecrankie while the visitor centre was open, but it was only at this point that it occurred to me that I could easily go down that way. 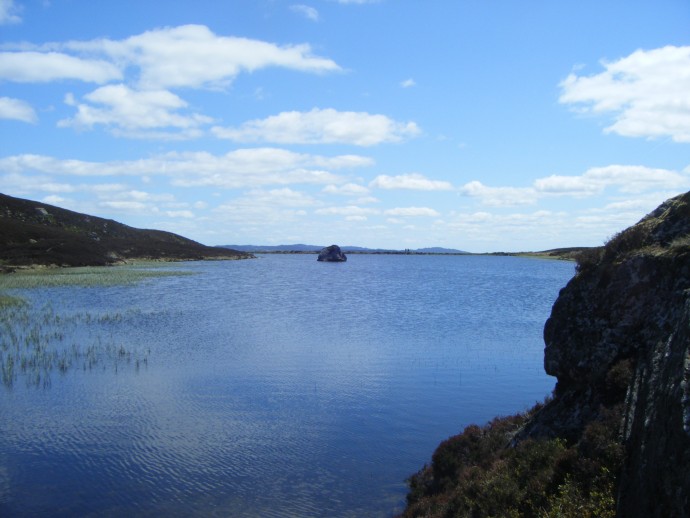 The far side of Loch a' Choire

At one point I think an arrow pointing uphill indicated the path that the map wanted me to follow, but I could see no reason to go uphill when I wanted to go down, and stuck with the path I was on. It wasn't nearly as good a path as the main one in a technical sense, but it a way it was nicer - just a narrow line through the heather. That eventually joined up with a broader path, and then with a track. Carn Liath from above Killiecrankie

I was hurrying down, because I knew that there was some sort of exhibition of weapons happening at the visitor centre, which I thought would be interesting, and it was a bit hot for hurrying. And then when I got there I'd got the times wrong and it was just starting instead of just finishing, so there had been no need to hurry - and I lost interest in weapons and ate ice cream and wandered about in the woods instead. After so long wishing for sun it was the kind of day when it was lovely to sit in the shade - nice views, and the centre itself was interesting.

And then back to Pitlochry by bus and Perth by train and a lift to Edinburgh - a nice variety of transport!

, Moulin is a lovely wee place

, much nicer than the bustle and commercialism of Pitlochry

, Ben Vrackie is a fine wee hill, No we don't want the Bus tour people up the hills let them stay in the streets doing there shopping or whaterver they do. You picked a good day although maybe a bit on the warm side but as you had picked up plenty of fluids at the Co-op, great stuff, pity about the heat haze at the top.

Fab report there, thoroughly enjoyed reading it, well done on your first Corbett.