our_route.gpx Open full screen  NB: Walkhighlands is not responsible for the accuracy of gpx files in users posts
Having cracked a couple of Mamores a month earlier, Big Jesper had the hots for more and the weather was looking the same way, so there was no stopping us heading back to the eastern one's this time. Looked quite a strenuous route, even for Cherlie and so it was to prove.
After a 6am start, we were driving through some serious fog on Rannoch Moor and Glencoe, wondering if we were to be blighted by poor vis, but just at Bidean, it cleared into a beautiful day. Not much later, we were heading back and forth on the side of Loch Leven, looking for the road up to Mamore Lodge and then pondering how much notice to pay to the 'no unauthorised vehicle' signs. (Had I been the driver our starting point might have been different, is all I will say.)
About 8 am, we were en route past the Stalker's Cottage, on the track which heads out to Loch Eilde Mor. A few hundred yards past here is a track, which heads off to the right, (at a 'lay-by' with a large stone,) through the trees, down the gully and eventually joins back to the track, near a stone memorial bench. This saves a bit of distance rather than going round a big hair-pin, though it did expose poor Jaf to some vicious clegs, eager for the taste of blue blood. At several places further along, they must have been less discriminating and also had a nibble or two, at my lesser quality plasma. There were some cracking views down Loch Leven, towards the Pap of Glencoe from this point. Anyway, about a further mile on, we branched left off the road, by a small cairn onto another track which heads northeast, slowly gaining height up to Coire an Lochain, where we got our first sight of other walkers - ?maybe Shuggy Boy, Nick, John? Sorry if didn't get your names right chaps. Coire an Lochain towards Binnein Beag 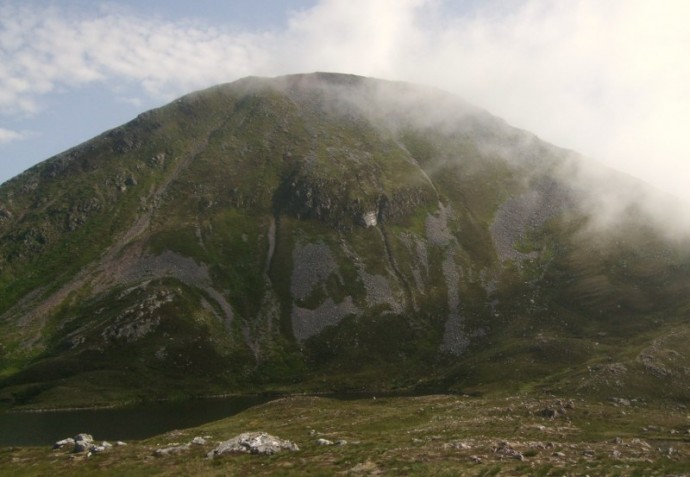 We enjoyed a bit of banter in the passing as we made our way up the rough track which heads up the south part of Sgurr Eilde Mor. It is quite a rocky ascent in places, but nothing too serious and after less than half an hour we were on top (about two and a quarter hours after setting off). Again the views were spectacular, with the drifting clouds, slowly beginning to rise on the Aonach Eagach, Glencoe hills, Ben Nevis and the rest. After a lovely view down on the lochan, we made our way west, sliding down a steep, scree slope, which only seemed to take about 10 minutes. Looking down on Coire an Lochain. From the bottom we made our way to the obvious track leading to the lochan at the foot of Binnein Beag and after another rocky climb, we were on top of our second hill, four hours in. I must admit, at this point, the toil and heat were beginning to put some serious doubt in my head, whether I'd be able to make the other two hills, but with some food, fluid and a further intake of fabulous views, we set off down another scree slope, again surfing a mixture of small and some larger stones, which tested one's concentration and agility to the limit, to prevent an unpleasant fall. Once back on the level, we skirted round the north side of the lochan, before eyeing our way up Binnein Mor. There would be a few possible ways to do it and I've no doubt, some more wise, or stupid than others, especially in different weather conditions. We chose to make the direct blast, sorry, crawl, south-westerly, to head up Sron a' Gharbh-Choire, despite the massive slabs of rock, sitting high above it. Once on top, it levels out a bit and looked quite obvious we would need to skirt round, north to Achlais a' Bhinnein Mhoir, to avoid some mighty serious rock climbing to the summit. After a bit of a slog up here, we scrambled over the large rocks, onto the ridge, and very small summit cairn. Was about 5 and three quarter hours to this point. 
By this time energy levels were beginning to dwindle and the feet were fair loupin,' however the ridge ahead to Na Gruagaichean looked most enticing and there was no point turning back anyway. After more photos of the Ring of Steall, Grey Corries, etc, we set off towards the increasing number of walkers now heading towards us. I don't know if it was just tiredness, or were we hurrying too much, but I don't remember as much of the ridge walk as I would have liked. Having made it to our last summit, we had a pow-wow to decide how we ought to come down. A previous walker had said we could come off by to the west of Leachd na h'Aire and we had the map of the path which leads off the second summit, but we more or less, quickly detoured west off that path, down the steep grassy slopes, before once again joining it, down into Coire na Ba, on to the sheep pens, then the road which comes up from Mamore Lodge. By this time the feet were more than loupin!
All in all, the trip took us eight and a quarter hours, gave us some great views, four Munro's, four sore feet and about the same amount of cleg bites. Probably my stiffest day in the hills yet. Ya canna beat it! The early bird club from the east head up Binnein Beag - Shuggy Boy an' co. Am Bodach looked quite menacing Binnein Mor. We headed up to right of crags. 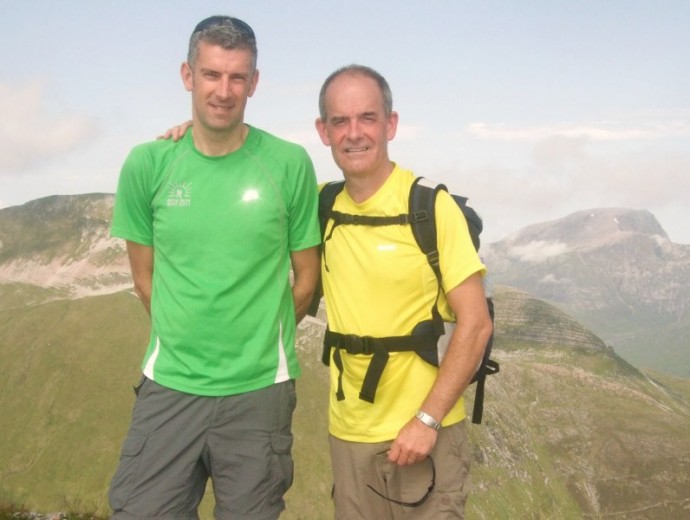 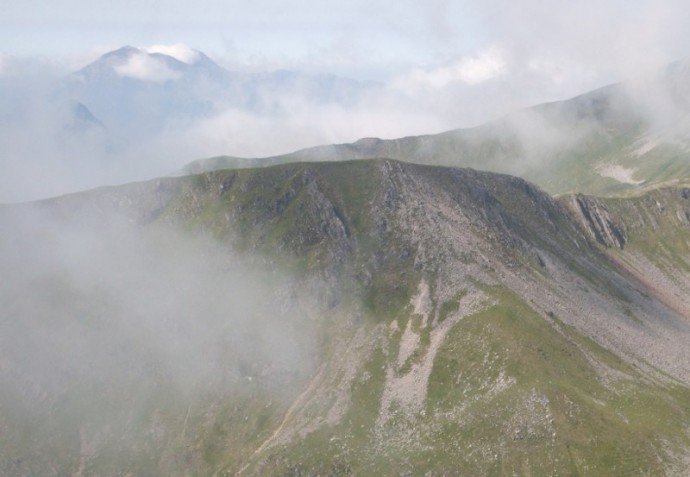 Re: Eastern Mamores - and Sores!

Another cracking day jimbo, roll on the next one.