I drove down the single track road in Glen Etive and parked just along from Dalness House. I went through the gate and followed the stream up steep ground to 776m and coire nan easan. View back down to car 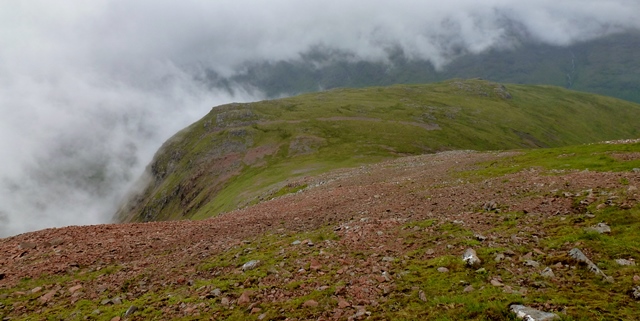 View down to coire nan easan

As I acquired height the views of the nearby Buachaille Etives (Beag and Mor) were welcome distractions.
It’s nice to see hills from different perspectives after you have been fortunate enough to have climbed them. The northern face of the ridge was steep with rocky cliffs adding to the atmosphere. Across to Buachaille Etive Beag

I continued NW up ridge to rocky top of Stob Coire Sgreamhach 1072m. A large stone beneath the cairn offered an excellent viewpoint and has no doubt been included in many climbers’ albums. The summit offered excellent views over Beinn Fhada ridge, into Corrie Gabhail and the lost valley, to the rear of the three sisters, and beyond to former J.Saville House in the pass of Glencoe, over to the Stob Coire nan Lochan. Savour these unique views as they are not visible from the piper’s layby or the A82. View from summit of SCS down to Coire Gabhail

I descended to catch main ridge and passed the small cairn marking the entrance into the mud chute down scree to the lost valley floor. A short climb up and along the steep ridge, with some very exposed corries on the North face, was required to gain the summit cairn of Bidean Nam Bian, 3 hours after start of walk. I continued along to Stob Coire nam Beith at 1107m optimistically hoping for better views. Back along main ridge to SCS North top looking back to summit of BnB I returned over BNB and descended to the red cairn. I went SE with the intention to descend into Gleann Fhaolain but found the ground was mostly loose boulders and scree, so decided to contour SW over boulder terrain to regain the grassy ridge. View down a wee corrie to Coire Gabhail View from south shoulder back up to SCS ridge

I then descended via the ascent route and kept E of the stream and deer fence. Down Glen Etive to Ben Starav I managed to get tripped up a few times by the thick dense ferns and bracken and the discarded old fence sections underfoot. The wet ferns added more paranoia about ticks waiting under the leaves for hosts to pass. The anxiety level was heightened recently after having been struck down by a mystery infection last week. ( a whole week on the sick!!!) Thankfully blood tests confirmed no sign of Lymes disease. However because of this illness the walk felt tiresome, also reckon the driving rain, steep climb, and lack of sound paths contributed.

Anyway it was a good feeling to get back down onto level ground and the car 5 hours after the start of the walk and feet were drenched along with waterproofs.

well done ,and a good report its good to see another route.hoping to get these two done on my next trip....might well take this route.

Cheers celt...a big positive about this direction was the avoidance of the chimney chute with the scree..and there was no need to worry about a parking space with the tourists and the piper...lol. You will enjoy these hills whatever route you choose.

Thats an interesting route. I climbed bouth Munros a couple of years back and really enjoyed them as well...I liked the sound of the piper...but it would have been a better welcome coming down the hills

Nice one ML, and I agree you cannot beat the sound of a good piper which would have been better than the wet ferns on this final descent route