Sticking to the task in the heatwave

Sticking to the task in the heatwave


This was my final section the the Lawers range to complete, and I'd been building up to it for a while. I'm more a walker than a climber, so the thought of the more challenging sections of An Stuc was lurking at the back of my mind always.
In addition the sudden heatwave gave extra cause for concern - what would be a middling strenuous walk most of the year suddenly took on extra considerations around sunburn, sunstroke, and heatstroke. Five hours under direct sunlight would be tough, and the likelihood of needing extra rest and hydration breaks would stretch that timeline somewhat. I also remembered to pack a hat with a brim on it!
These things in mind I started extra early, leaving the car park at the Lawers Hotel at around 06:45, in mist coming off Loch Tay. Following the signs to circumvent Machuim farm it was a question of wading through the head height ferns that press out into the footpath, until the stile on to the Lawers Reserve. Still swathed in mist I followed a roughly northerly bearing, cutting straight off the track and going straight for Sron Mor. (One of the benefits of prolonged hot weather is the drying out of the moss and marsh, making going cross country less arduous!)
Clearing the mist I was presented with an ocean of low level cloud, clear, deep, blue skies, and the fantastic islands of rock and grass floating in the midst of it, while my journey for the day now turned pretty simple. Picking up the path half way up Meall Greigh I passed an unfortunate looking sheep, lying on it's back and twitching, with a lamb baa-ing at it from nearby. Not sure what the situation was, but it didn't look good, I had no signal to phone anyone, and was too far in to turn back at this stage.
Once on the track reaching the first summit was possibly the toughest part of the day, by 08:30 I needed to change into a long sleeved top to protect my arms and neck from the sun, applying sun cream for the second time that morning, and being careful to keep it out of my eyes!
The track leads straight on across Lairig Innein and up to Meall Garbh on a pretty undemanding ascent, following a fence line closely almost all the way to the summit. There are some stunning views North, East and South from here, sadly the haze shortened the distance but if it weren't for my concerns over how long I was spending in the sun I could have sat down on Meall Garbh's summit and stayed for the day!
After a steep descent I find myself looking up at An Stuc and feeling pretty good about it, there is indeed a clear path round to the left hand side of the prow so off I trot. Five minutes of steep walking on loose soil and rock later I'm presented with no alternative but to use my hands, first to steady myself and then to assist in hauling myself up. Some careful choices and two reversals later and I'm back on a footpath, sitting down to take my breath and steady myself. Not so bad, but requiring nerve.
It's a brief step to the summit, now regretting the salami sandwich I'd had on Meall Garbh, then a quick desent to Bealach Dubh and Ravens Gully. The main walk guide on this site is right, this is a VERY steep descent, I stopped and rethought more on this than I had on the ascent of An Stuc! Once the lochan was reached it didn't take long to pick up a trail leading straight back down to the dam, and the footpath back down alongside Lawers Burn. By this point however I was struggling in the heat, feeling as if I'd been pinned out under a hammer, and I'm fairly sure it was only the thought of a beer at Lawers Hotel that saw me through!
I made it back to the car with a litre of water remaining in my pack from the four that I took, which is definitely a higher rate of consumption than normal, but given the conditions this is no concern at all!
Great walk though, in fantastic visibility, which given the weather conditions we've been experiencing, is just the tonic! Sron Mor breaking through the mist Mist chasing me up Sron Mor Lawers, An Stuc and Meall Garbh....and a stunning blue sky! Meall Garbh summit, An Stuc, Lawers in the background 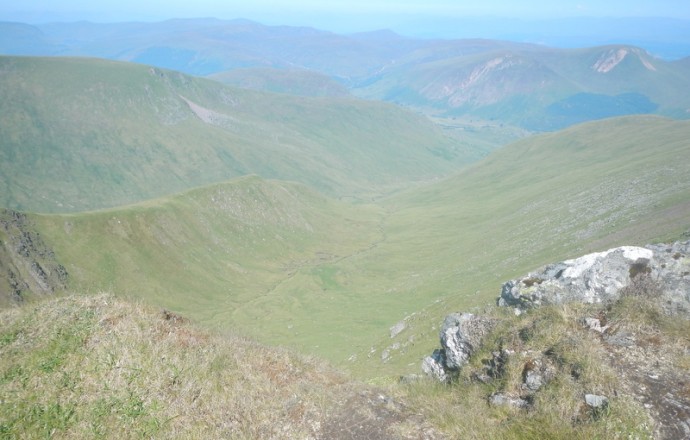 Summit of An Stuc The Lochan from Ravens Gully Yes its a steep gully! 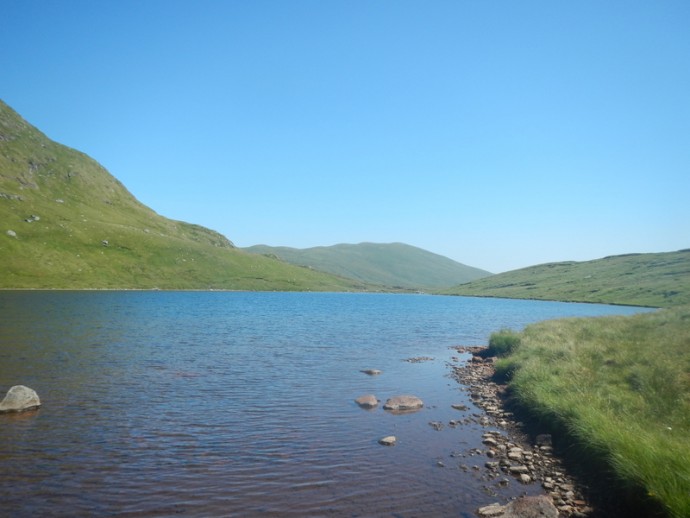