Given the good weather we've been having recently, we decided to find a route where we could camp on a ridge, tick off some munros and hopefully get some good photos. This walked fitted the bill, in addition including a wee bike ride, which made it an enjoyable venture.

Rather than climb the more popular Ben Alder, we decided to do the 4 munros in the opposite ridge, Carn Dearg, Geal-Charn, Aonach Beag, and Beinn Eibhinn, the intention was getting some good shots of Ben Alder itself from the ridge. The route would start from Dalwhinnine train station, and include a bike ride along Loch Ericht, camp at Loch Pattack, then climb the ridge and camp on the best spot and return same route. 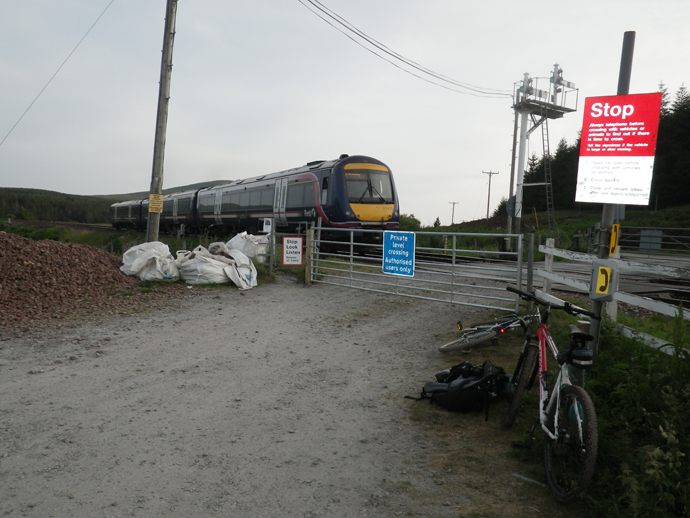 Start of route at Dalwhinnie

We started off from the wee track beside Dalwhinnie train station at 7pm. I was borrowing a bike, so it wasn't an ideal fit. Cycling and carrying a full pack is a tough old experience, especially when the bike is a few sizes too small. After 20 mins of cycling the old back started complaining. Luckily the bike ride along the Loch only takes about 1 Hr, and isn't too steep. We chained our bikes up to a metal post near Loch Pattack (539787), and camped on a small flat peninsular next to the loch. 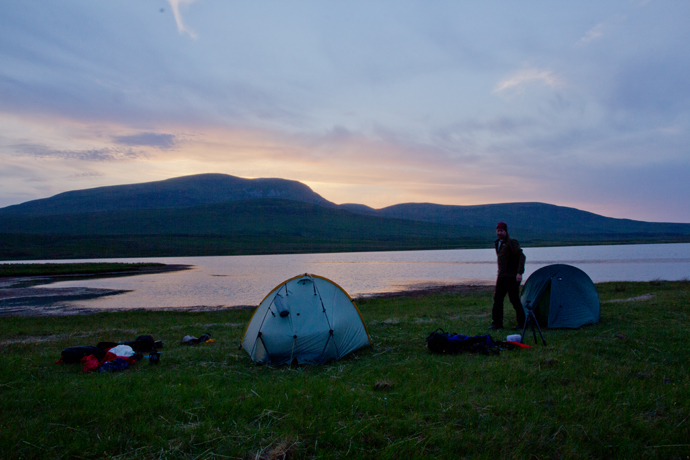 A small gravestone was in memory to "Trigger" presumably a horse, given that we saw 3 or 4 that evening. 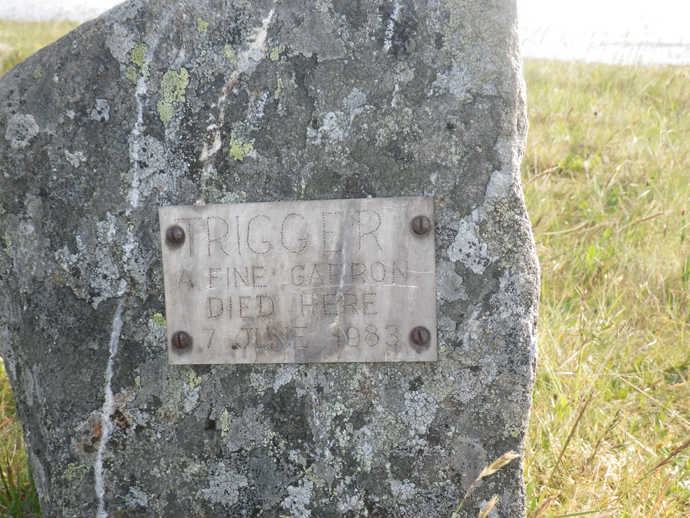 In the night we heard some moaning, grunting and stamping outside the tents....was it the ghost of Trigger?? We were camping on top of his grave after all !

Who knows....However it was more likely the horses we saw earlier who came to greet us, and make new friends. They were quite friendly (a bit too friendly!) 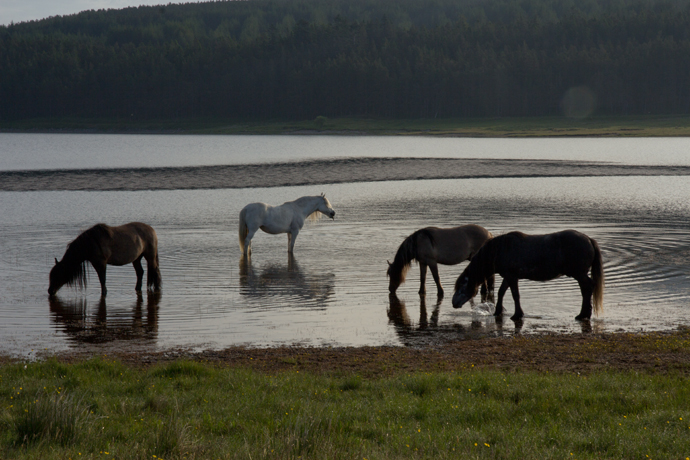 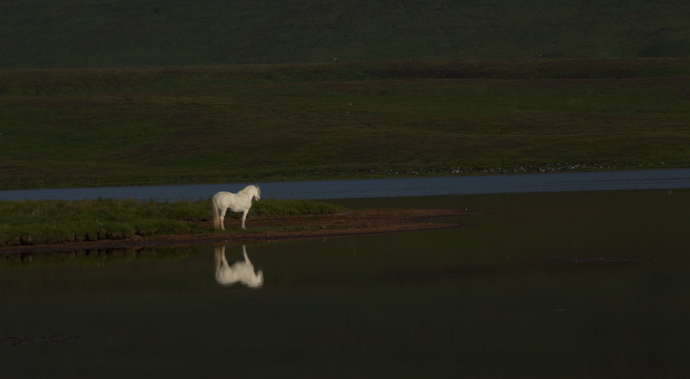 The white horse at Lock Pattack (sounds like a pub!)

Anyway after a bit of breakfast,. we broke camp and started our ascent up the first Munro Carn Dearg. Bridge over river at Lock Pattack

Fresh water supplies were limited. I did boil some water up from Loch Pattack in the night, but as the horses were trampling all over the spot were I filled up, I didn't trust it much! so we carried on the track around Loch Pattack and headed to the Allt Cam Ford further west, to fill as much as we could.

We then started the slow climb up the ridge of Carn Dearg. 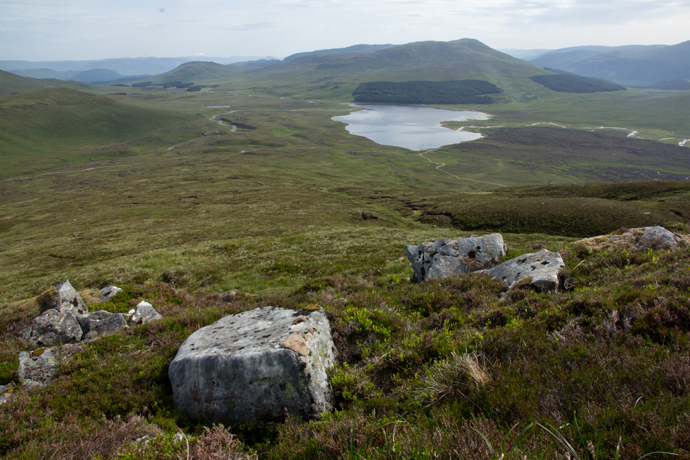 The original plan was to camp somewhere on the ridge, however after 1hr of puffing and panting with a full pack we both decided that in this heat, it would be better to camp on the first plateau we reached on Carn Dearg over 820m up (516773). Although we had only climbed over 400m it was hard work in the sun! We had good views of the Ben Alder and the surrounding hills, so it made a decent spot. 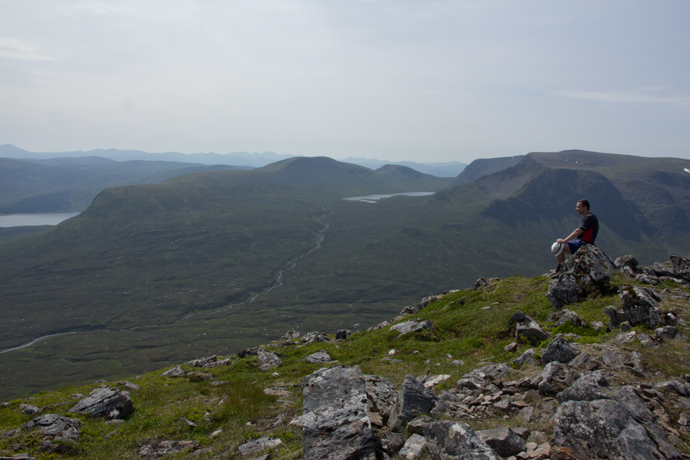 Our Ben Alder view from our ridge campsite

We pitched tent, and then carried on to the top of Carn Dearg. It was a lot easier with a nearly empty pack! We both knew we made the right decision. 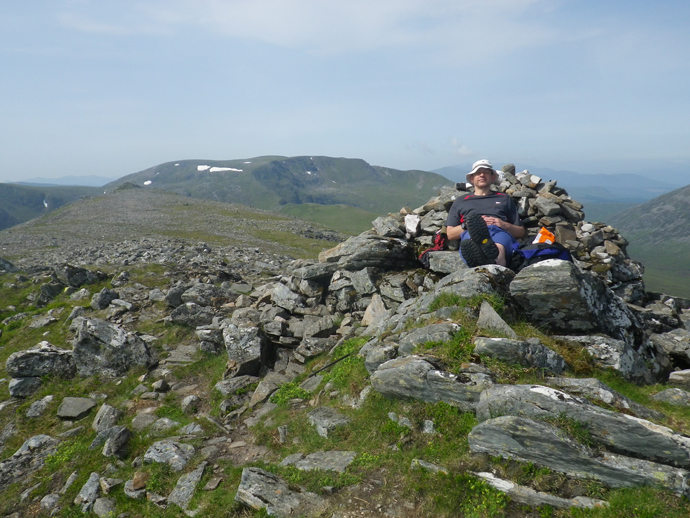 The top of Carn Dearg is quite stony and bouldery which was a bit of a pain. The route to the 2nd Munro Geal-Charn was obvious. Although the small arête up the ridge of Geal-Charn looked a bit imposing from a distance, it actually offered no real issues, and a good path leads you up to the top of it. 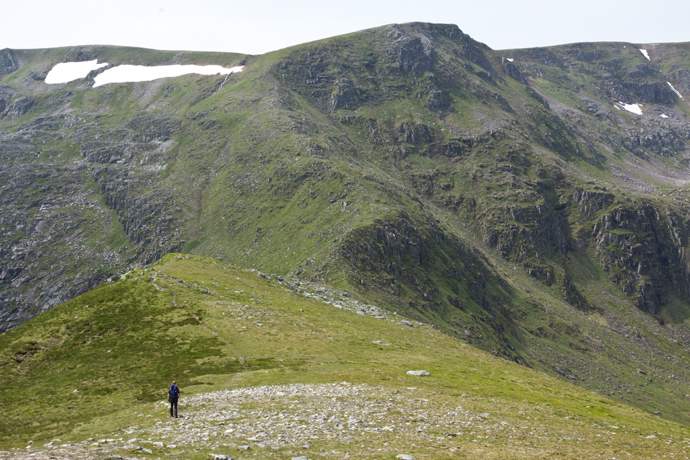 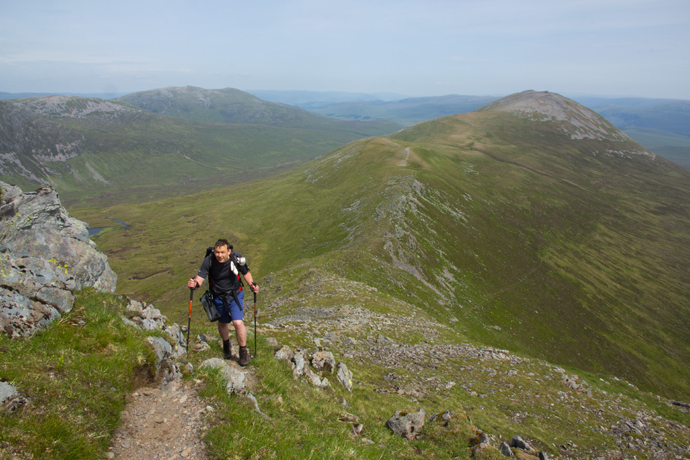 It should be noted that in bad visibility, coming the other direction, you would need to find this path first, as this is the only way off the hill from that direction. It was good to find a good running river flowing down, and we had a good break supping up as much of the cool water as we could and replenish our stocks . We also knew that we could use this to refill on our return, so the pressure was off us to budget our water.

We found a snow hole on the top of the waterfall which flowed off the hill. Scotland can be such an odd place sometimes.... the weather approaching 30C and here was a snow hole! 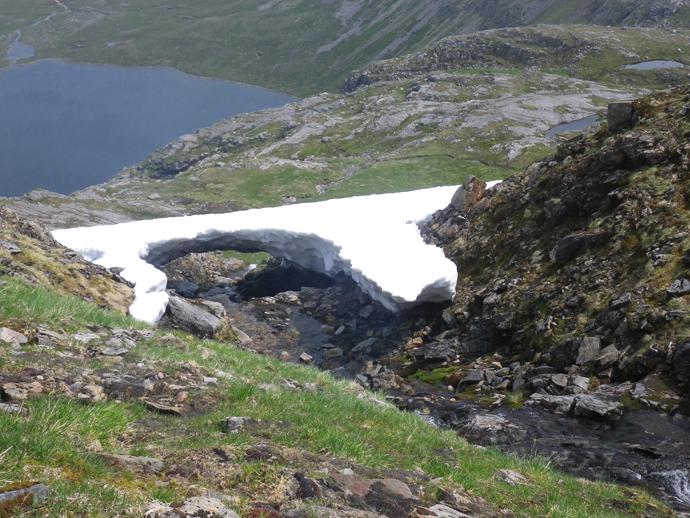 Further along, we found a snow field....what is one to do but....have a snowball fight! I don't think there was too many people in the UK having a snowball fight that July weekend! 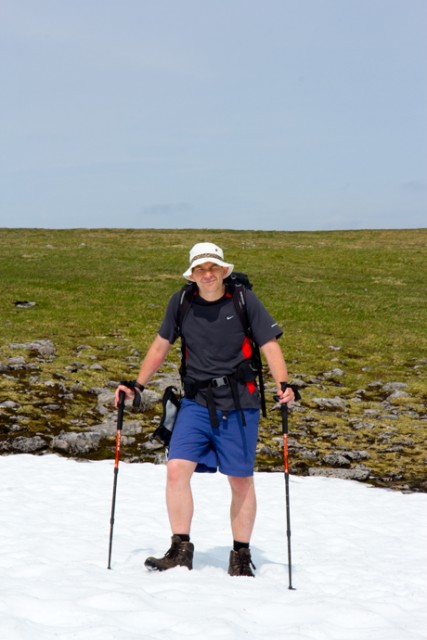 The top of Geal Charn is as flat as a football pitch and again in bad visibility you could easily lose your senses, so good navigation would be required. At the top, we got treated to what appeared to be a jet fighter dog fight by 3 of our finest! this lasted for about 10 mins and they then flew off down the glen under us! Pretty impressive stuff. 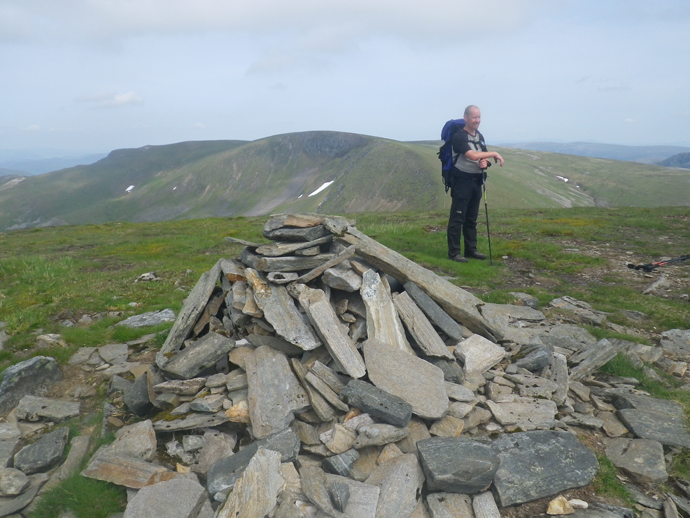 The last 2 Munros, Aonach Beag and Beinn Eibhinn, are relatively easy from this point. 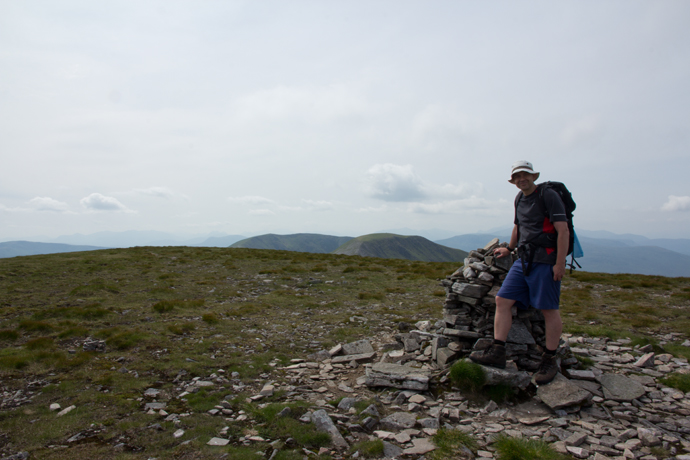 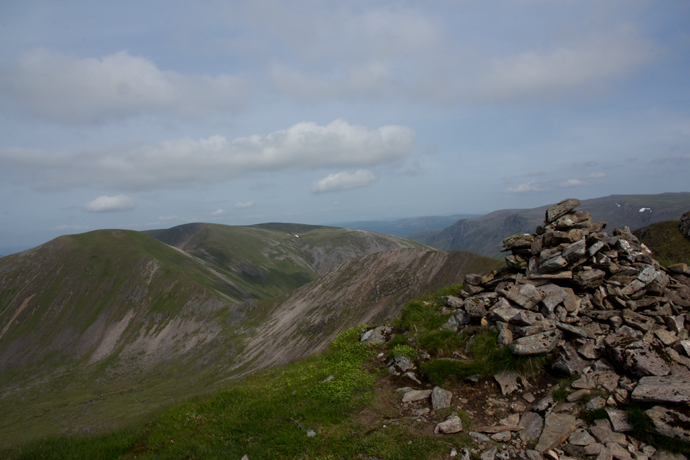 Again keeping on the ridge, there's little more than 200 m drop between each one. We reached Beinn Eibhinn 6.5 hrs approx from when we started in the morning from Loch Pattack. My mate then informed me it was his 100th Munro, so it was a good excuse to get the whiskey out (although still a tad to hot!)

Time was getting on at 4.30pm so, after having a slug of the highland fuel, turned around, and started our long walk back to our tents on the other side of Carn Dearg. 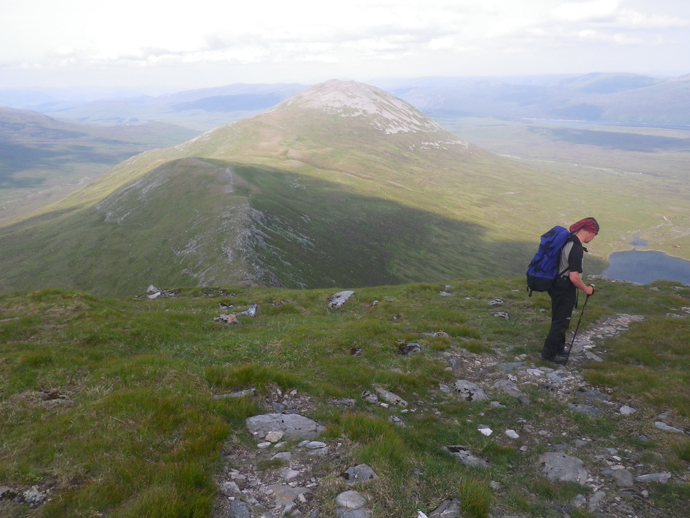 Long route back to tents

I guess not to many folks do these hills twice over on the same day ! All for the sake of a chance of a decent photo! When we got back to the tents around 8pm the weather started turning and the cloud rolled in....ah well! 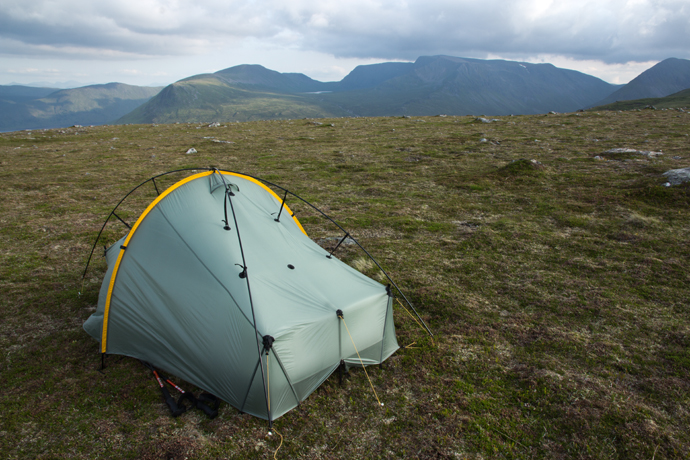 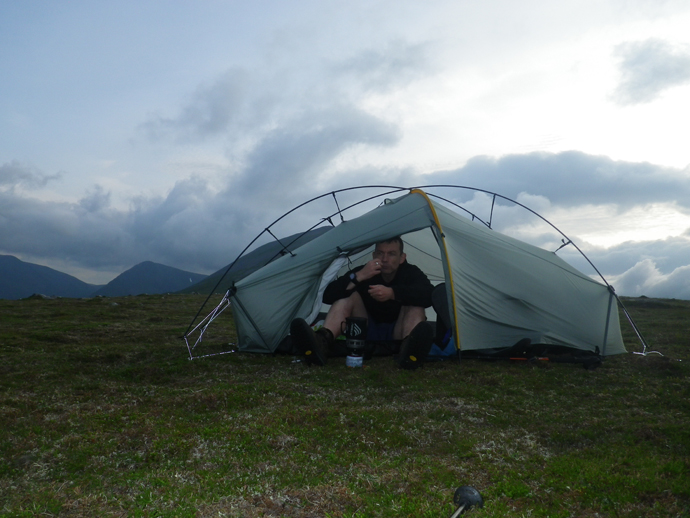 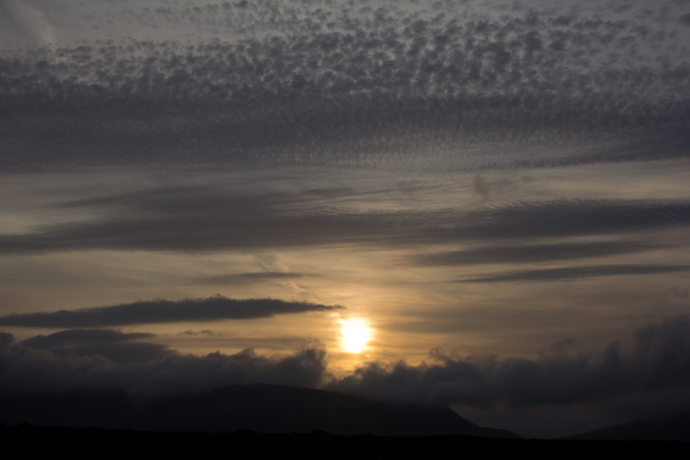 Sunset and clouds rolling in

After a windy night on the ridge, we descended a rather misty hill top, and headed back to the bikes. We did manage to get some good views when the mist cleared. 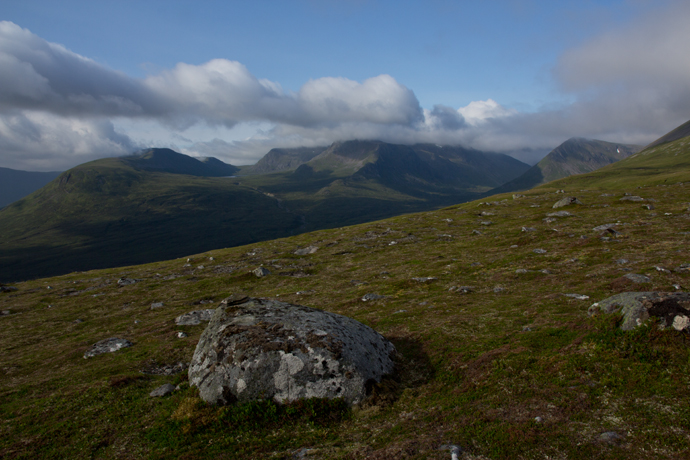 Ben alder in the distance

By the time we got back to the cars, 2 nights wild camping, hot and thirsty, it was turning into another heat wave and we were so glad that a beer had our name on it at the Dalwhinnie caf !

I've been up to Loch Pattack a few times on the bike but I've never done any of the Munros - after reading this it makes me feel like I should do something about that.