Stac Pollaidh ... then and now

Stac Pollaidh ... then and now

It was a bitterly cold December day. The mist swirled along the summit ridge and the wind howled through eerie pinnacles that looked more like gargoyles than rock spires. I imagined I was approaching the Lost World, an inaccessible plateau where time stood still. A place where dinosaurs still roamed, devouring anything and anybody that managed to scale the cliffs. I had never seen such an awe inspiring mountain before in my life. Was that an eagle I saw circling looking for carrion, or was it a pterodactyl ?

In those days few people ventured into the remote highlands. There was no car park or signs informing that the mountain was suffering from erosion. There was no obvious path to follow and certainly there was not a stone stairway accessing the northern slopes. My brothers and I abandoned the car in a passing place and made our way across the heather slopes. We were hoping to access the summit ridge by the scree gully that held the lobster’s claw.

We had seen pictures of it in one of WA Pouchers photo books of Scotland and decided we wanted to see it for ourselves. The top three or four feet had already fallen since Poucher’s photo. That part was two little spires which looked like the pincers of a claw, hence the name given to the pinnacle. This is the photo I took of the remaining part in 1980. Sadly… I believe it has long gone so, anyone who ventures onto the ridge now will no longer see it

I guess people like myself who clambered all over the soft sandstone ridge would have accelerated the natural erosion but in those days we never gave it a moments thought. We thought mountains lasted forever, in fact at that age we thought life lasted forever. This photo taken amongst the pinnacles suggests we were nothing short of posers

We didn’t care for weather forecasts as they were very unpredictable in those days. It didn’t bother us as we ventured out in all kinds of weather. We hadn’t heard of gore tex clothing or shell suits. We climbed in jeans and jackets that were no better than todays pac-a-macs, but we knew the benefit of layers and wore oiled woollen balaclavas and mitts to keep warm. We feared nothing, we even tried to climb the lobster claw ..but it was smooth and featureless. Perhaps the lead in the water pipes that fed our houses had given us brain damage ?

We never stopped to think of the consequences our actions would have had on the hillsides. The only rule we followed was to take all our litter home. The best part of the day was glissading down the scree slopes on the way home. Im sure we raised clouds of dust on the steep fast descents. I have not done that in years, I guess all the decent scree slopes have long ended up at the bottom with generations of walkers using them to get off the tops.

Ahhhh.. remembering back …those were the good old days.

Thirty years later I went back to Stac Pollaidh, I parked in the large car park at the foot of the hill, amongst the camper vans that had stayed overnight. Sadly the feeling of remoteness and adventure that I felt 30 years ago was no longer there. I read the signs and obeyed them. I didn’t have a map or compass.. but then.. I couldn’t get lost as long as I kept to the pavement.

I took the staircase to the ridge and I must confess, the views were still astounding. This photo of Suilven was taken with a digital camera that I could only dream of in 1980. The weather was perfect and the forecast was spot on.

I wasn’t with my brothers this time. In 1980 I went to Blackpool for my holidays, that was the norm in those days.
Im glad to say, It was still far from the madding crowd. As I watched the sun set over the Inver Polly reserve… I couldn’t help but wonder … what Stac Polly would be like in another thirty years ?

Remember and take your litter home and try to avoid causing excessive erosion and hopefully it will still be there.

Thanks for reading my report

Fantastic photos - but I especially like the film photos - they have a lovely quality! I must admit to not even being vaguely tempted by digital yet - I'm gonna wait till there's no film left!

Yep, in those days we sure didn't have 'all the gear' and we were fine even so...

I really enjoy reading all your reports and experiences. Please keep them rolling.

My first ascent of Stac Pollaidh was in between, after erosion had pretty much destroyed the southern approach but no path had yet been built. I do think it is better now than it was then, though obviously going back to before the damage made the path necessary would be great!

Thanks for the comments and encouragement guys ..I hope to get a few more reports in before I reach the mortal summit

mountain coward wrote: Yep, in those days we sure didn't have 'all the gear' and we were fine even so...

Hey.. funny you should say that MC but I thought we carried lots of gear. Just look at the huge rucksacks we lugged around in those days. We used to fill them full of heavy junk so we carried extra weight to keep ourselves fit. Nowadays people tend to think the opposite way .. and want to carry the lightest gear they can buy ?

We had crampons too. In the odd occasion when snow stuck in them, a deft blow from the axe, without breaking stride, soon had it dislodged. I have often wondered what those yellow things on modern crampons are for ?

Perhaps I was lucky but in all the years I walked on the snow slopes I never had to self arrest. The one and only time I slipped on a snow slope, down I went, head first and on my back. The rucksack kept me pinned to the ground like an upturned turtle and I couldn’t get round to get the axe in. Fortunately, I think I survived that experience ? However, I often wonder why folk practice self arrest by throwing themselves down on their fronts with head facing up the slope.. what’s the odds of being in that position if you do slip ?

This photo illustrates another huge rucksack being hauled up curved ridge on the Buachaille. Approx total cost of the winter gear in those days was about ten and six. I wonder why it’s so expensive now ?

Thanks again to all for reading my report

The film photos are superb, and add a real time stamp to the 1980 venture.

By the way, as a campervan driver, cheers for the tip on the carpark

Yeah the stuff was heavy, but what I meant was that we didn't spend a fortune on specialised gear, especially clothing - we made do with old stuff and an anorak or cagoule... We even walked with cycling capes a lot - great on a calm day - bit dangerous on a windy one! Nowadays, if I walk in just old clothing (e.g. tatty cotton t-shirts, old sweatshirts, old and worn-out fashion leggings etc.) in summer instead of the latest gear, people in places like the Lake District scoff at me, make comments or snigger behind their hands... all because I'm not covered head-to-toe in the latest Goretex creations! They don't seem to realise that, when it comes to the Lakes, I probably have 10 times their knowledge and experience there!

I guess its much the same in anything we do MC and that’s what makes the world go round. Some folks know there is still gold to be found in them hills.

However going by what you wrote … the old parable .. “shouldn’t judge others till you walk in their shoes” seems apt in the lakes ?

Talking of which… I guess I can judge my brothers well .. for I had the smallest feet in the family and always got their boots when they out grew them. Money was tighter in those days .. perhaps ?

Hi IainG, I don’t think there is a problem with the camper van in the carpark ..but unless you like the crowds ..there are open spaces around and I don’t think any one will bother you as long as you keep it tidy and leave no trace of your visit. Keep the passing places clear too. I have stopped at this spot once or twice and never seen a soul .. best before July though.. after that … the midges will move you on.

Awww … looking at this photo makes me long for the longer days again ..sigh

I think, to be honest, it mostly depends on the time of your visit and the area for what kind of Lakes walkers you bump into... many of the ones you meet around Windermere/Ambleside (and now Grasmere

) are the snobby/yuppie kind who think you have to have all the gear. You tend to meet far more of these in the summer and especially around Bank Holidays etc... I find the ones around the Northern fells (i.e. Keswick area) the best for being genuine down-to-earth outdoor types

Great report - full of nostalgia. I love this part of the world. Here's a pic from '73 - scanned from a slide taken on a 'state-of-the-art' Practika. 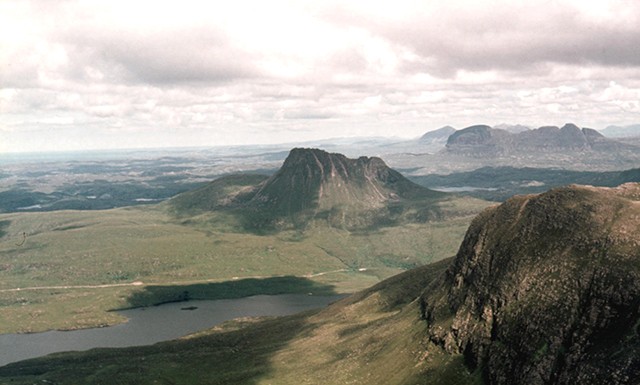