This wee trek started from the car park in Glen Felshie (851984) just before Auchleum Farm. I used the mountain bike to cycle along the recently upgraded track to the bridge across the river Felshie at 850964. I turned left and followed the feint track through the field towards the visible road on the south. Mistake, I should have continued straight up the path from the bridge directly onto the tarred road. The preferred road from the bridge over the river Feshie

Anyway I continued along the tarred road passed the grand properties which faced onto the motorway leading up to Mullach Clach a Bhlair. View across to motorway up to Mullach Clach a Bhlair

At the final private dwelling, the road surface changed to stones and loose pebbles. I noticed three wild horses grazing away near the river bed, in fact met them on the return leg too and they had not ventured far. Horses grazing in glen Feshie next to river

I continued along the level glen beyond the old ruin then over a big dry river bed, then a wet one before entering the woods to rise steadily SE. 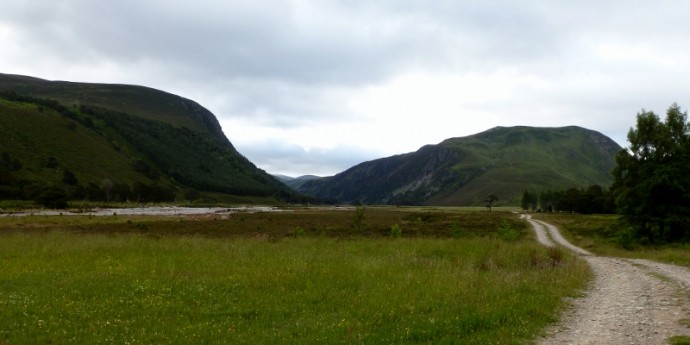 Several river crossings later the waterfall at Ruighe nan Leum was reached. An excellent waterfall was concealed back from the path. 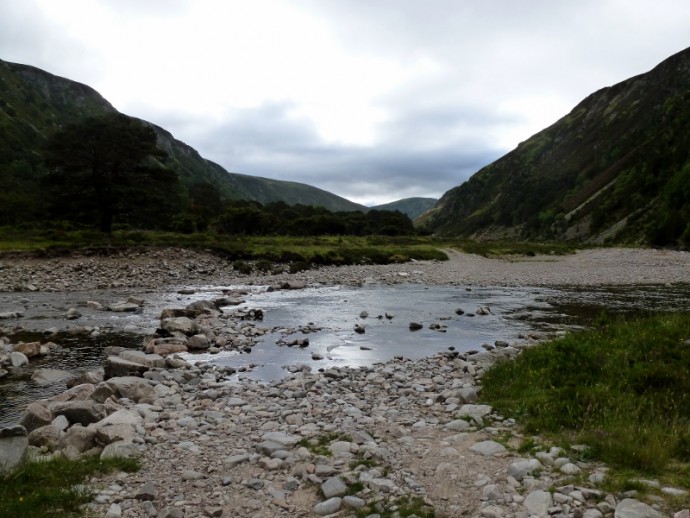 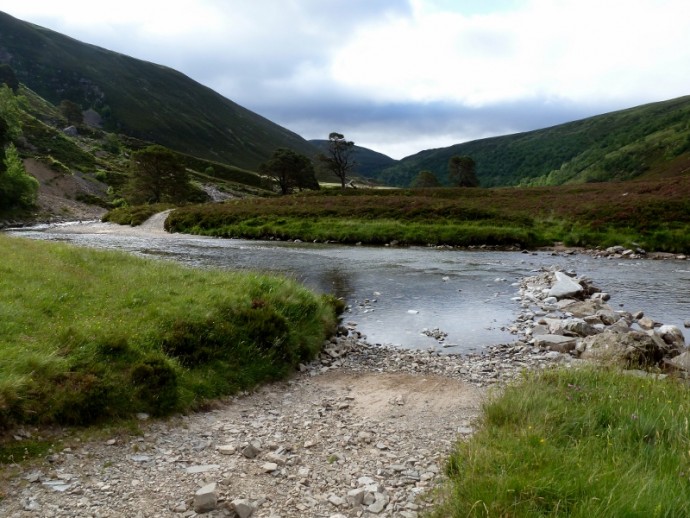 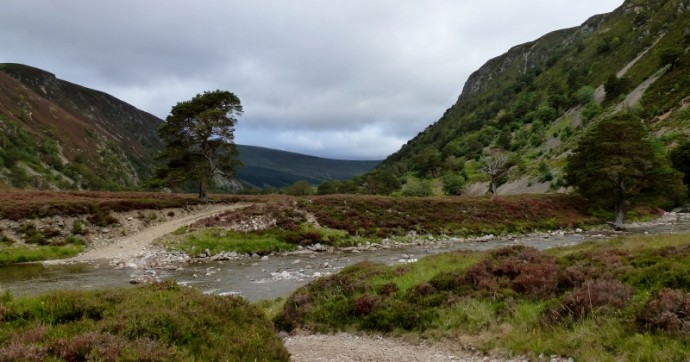 The terrain changed to peat here which if wet it would be prudent to deposit the bike here for the return leg. I continued over the reasonably firm surface to reach the wooden shelter with the metal roof at 935am. A small stone ruin was also located up stream, could be used as a wind shelter or as a base for an overnight stay. View from ruin across to both munros

I refuelled and deposited the chariot before wading directly across the river aiming for the domed top of Carn an Fhidhleir. The terrain was uneven with peat bogs and heather but dry and reasonably firm. 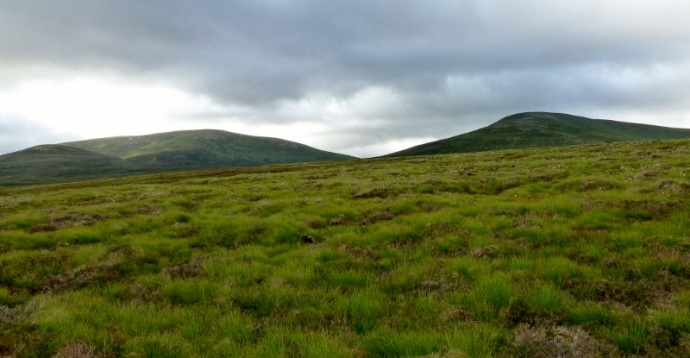 View toward CAF and AS after crossing river

A further crossing of the river was required before the steady climb up the north ridge to reach the summit cairn at 1120. 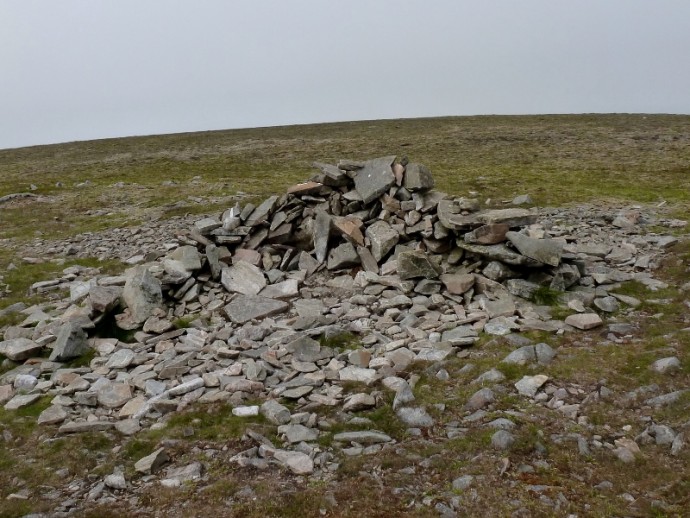 I had felt the effects of the cycle in on the calf muscles and still felt groggy from the recent viral infection. Definitely not the best place or most appropriate time to think about illness.
I sat behind the cairn amid the swirling cloud and soaked up the views before heading down to col leading to the top at 906m. View across to AS

The path contoured east before descending into the col between the Allt a Chaorainn. Is anyone really happy about donating height on any climb? Descent to Glen before ascending AS

I rested in one of the peat bogs for some lunch drinking the remoteness of this location. No signs of any running streams to replenish fluids so set off up toward the summit.

A gradual climb led to the rounded summit top at 1245. Great 360 degree views. 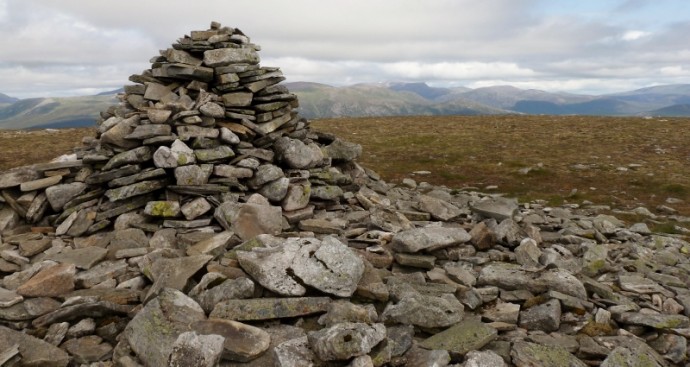 View from AS summit toward Cairn Toul

Zoom in toward Devils Point 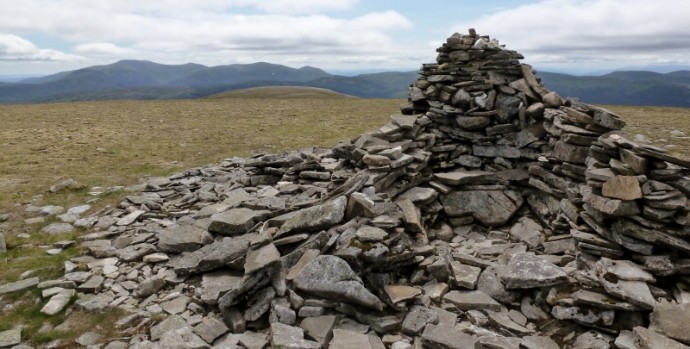 View south to Beinn a Ghlo

I descended direct toward the ruin. It was easy terrain down to the stream where it changed to peat and bog covered in heather. Nice one, a supply of running water to restore body fluids. The temperature of the water was mild and not cold.
I continued along the river bed to return to the ruin and collect the bike at 1445.
I changed into flip flops with bare feet before setting off for the return cycle. Once again the big bike decided to throw the rider into soft peat. I muttered a profanity or two before remounting and following the track back to car. 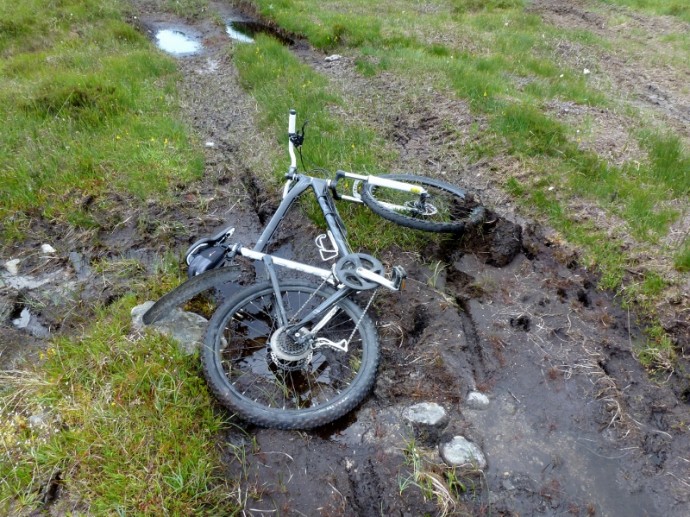 Another soft landing from the MTB

Crossing the rivers was great with the flip flops on and it helped cool the feet.
The walk back up to the waterfall at the Ruighe nan Leum was also well worthwhile as you could not see the upper levels from the track. The return leg provided a totally different vista and the contrasting views of the rocks, the cliffs, the waterfalls and the variety of visible trees were superb. 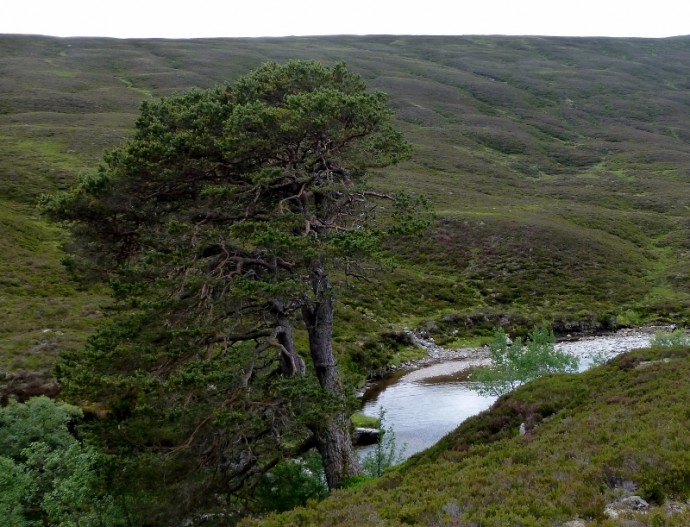 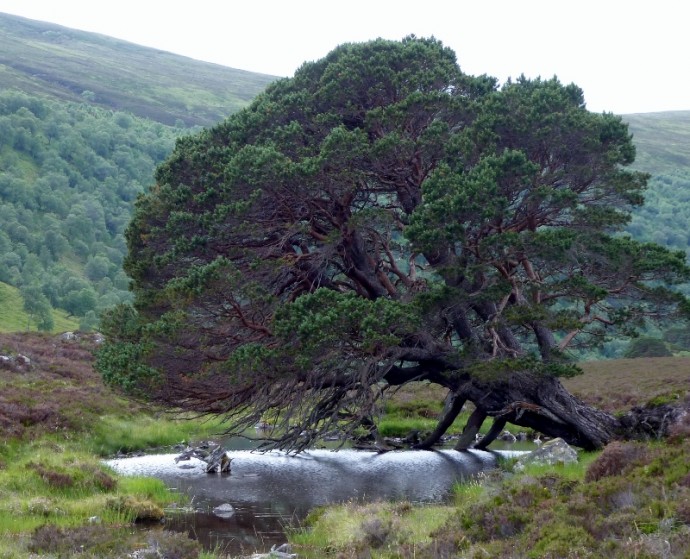 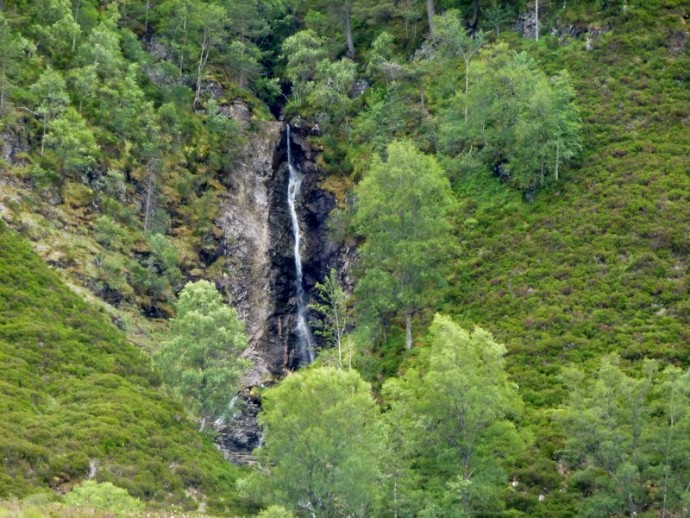 I noticed several ideal spots for wild camps and seen at least two tents in situ. Other than that there was no sign of human life until arriving back to the busier car park at 1620.
A physically demanding day for two rather unspectacular domed top munros but the remoteness and the natural beauty of the surrounding terrain totally enhanced the enjoyment factor. A superb glen with fantastic natural scenery and an excellent way to approach these two munros.