It promised to be another very hot day so I set off early from the bridge over the Scarisdale River hoping to get some of the ascent done before it got too hot. Some hope! There isn’t much of a path beside the river. 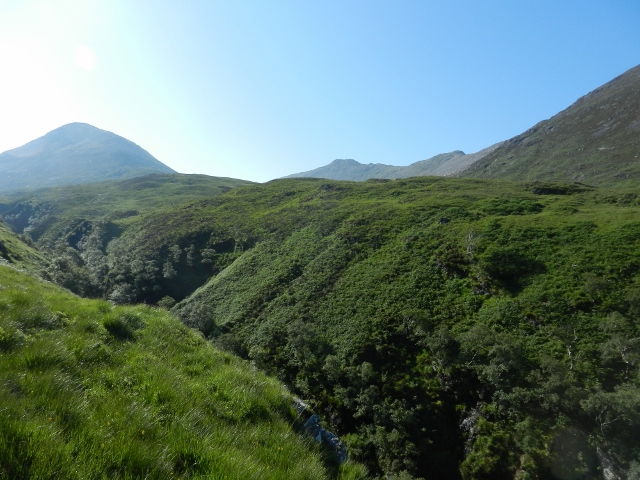 In fact, paths seemed to be in fairly short supply on Mull apart from the “tourist route” up Ben More and the gravel track up to the masts on Dun da Ghaoithe. Above the waterfall it was easy to cross the burn 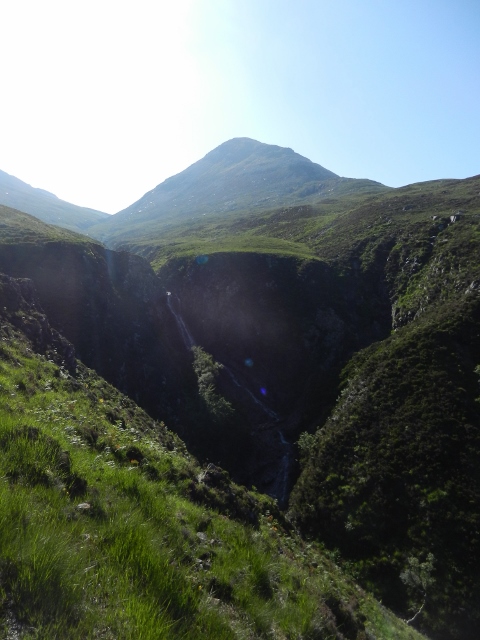 and then head up the steepish slopes of Beinn nan Gabhar, 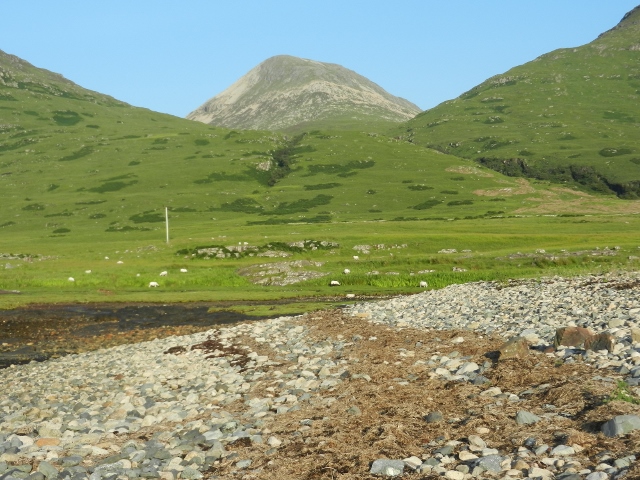 Beinn nan Gabhar from the beach

through some rock bands and scree. 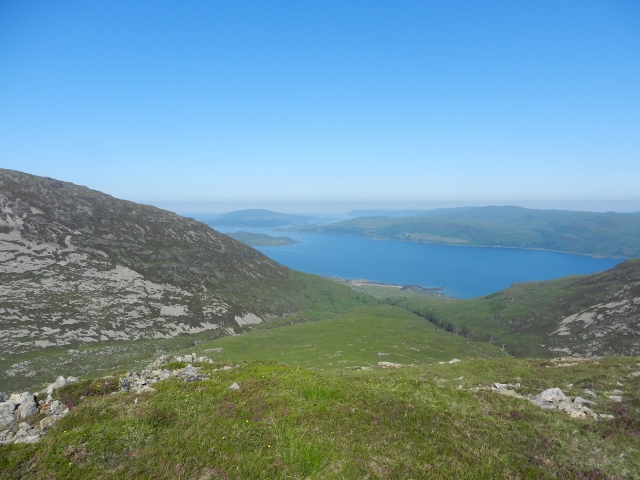 From the lower slopes of Beinn nan Gabhar

It was already very hot indeed and the clegs were merciless. There were excellent views across to the ridge of Beinn Fhada and of the hills to the north east. 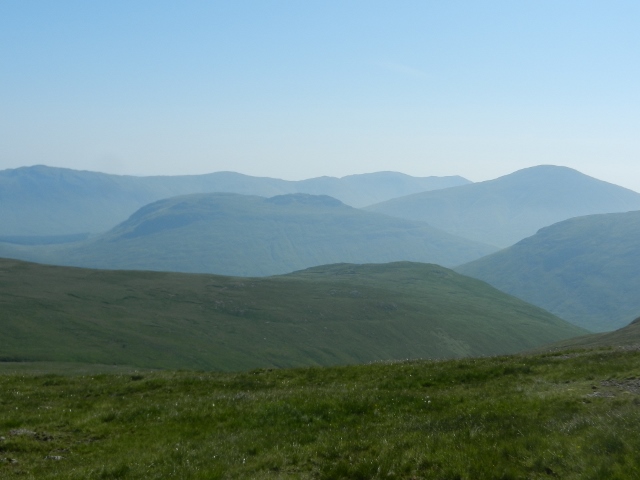 View to the northeast

Ben More looked as though it was going to be hard work. 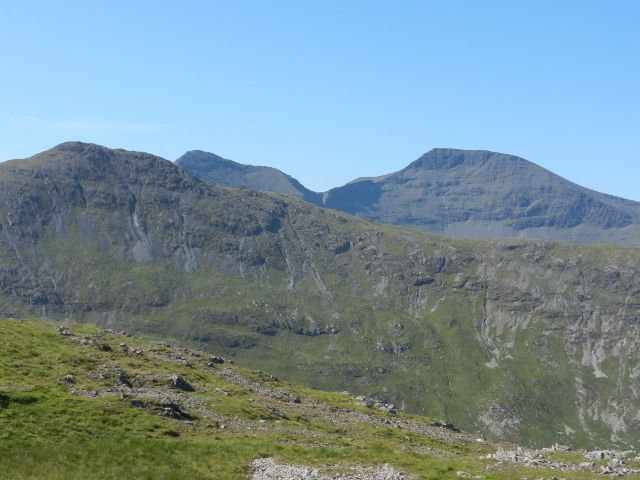 Dropping down to a lochan the ridge curls gradually towards the summit of Beinn Fhada beneath which nestles another lochan. Then comes the more interesting bit. The ridge descends quite steeply to a bealach and up to the summit of A’Chioch. 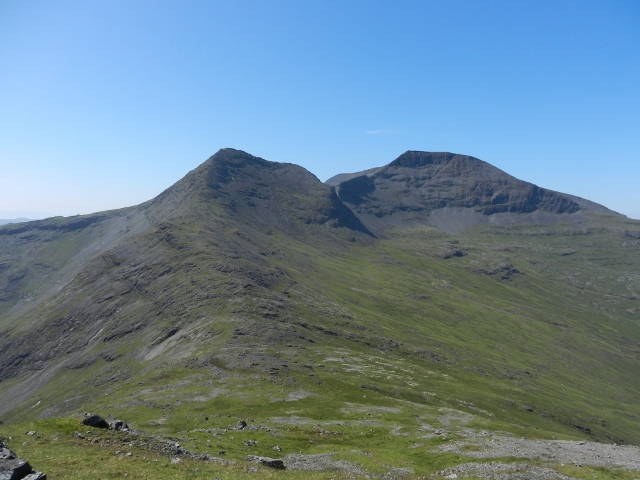 The ridge then becomes quite narrow but the scrambling is fairly easy and good fun if you stick to the apex of the ridge. There is a path lower down to the south east which you can use to avoid most of the scrambling if you prefer. 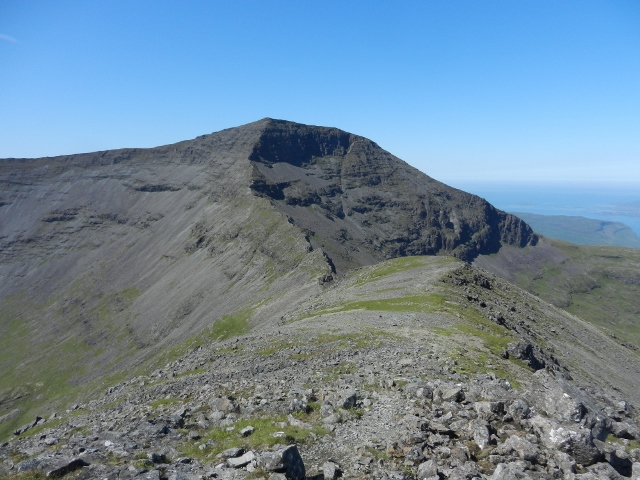 Scrambly ridge up to Ben More

The final steep ascent brings you out at the summit of Ben More to be greeted by people who have come up the other way. 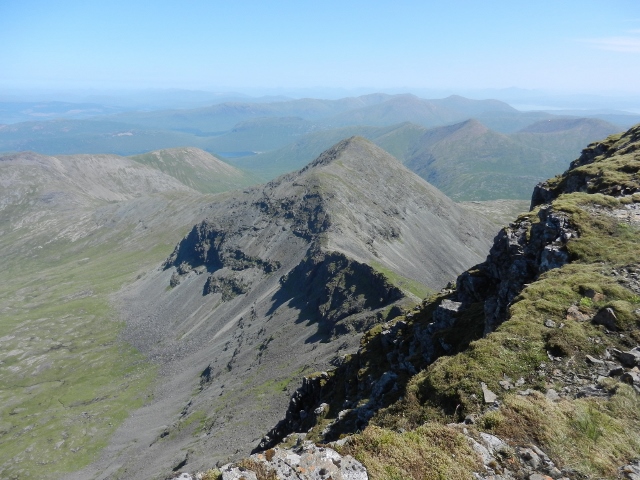 Looking back along the ridge from the near the summit

I followed the highway down and along the Abhainn Dhisaig, watching people toiling up in the heat. 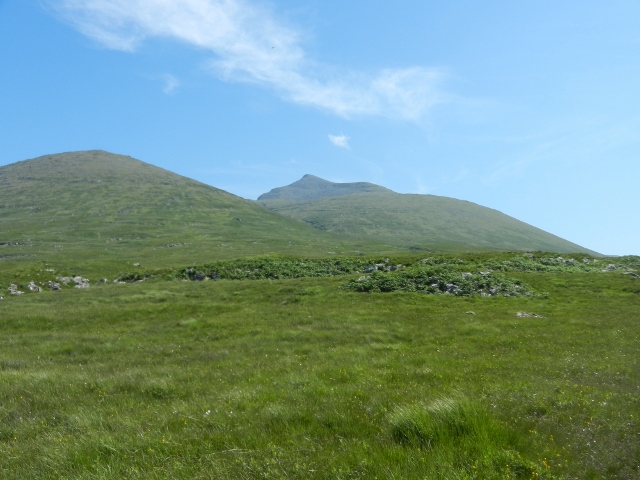 Ben More from low down on the tourist route

Then back along the road about 3k to the bridge. The tide was in so a swim seemed in order to cool off. Only one more Munro to go now!!!! 
our_route.gpx Open full screen  NB: Walkhighlands is not responsible for the accuracy of gpx files in users posts
Last edited by bootsandpaddles on Tue Jul 23, 2013 2:38 pm, edited 1 time in total.

Great report. Great pics. Great day to be on a great island.

And great excitement for you...281 down, only Carn Mor Dearg to go.

Lightfoot2017 wrote:Great report. Great pics. Great day to be on a great island.

And great excitement for you...281 down, only Carn Mor Dearg to go.

I wonder if it might be a bit of an anticlimax when it comes to it.

That looks a hot day, nice photographs, and good Luck and hope the weather keeps up for your last

. It won't be an anticlimax when it comes, I can assure you, bootsandpaddles, Compleatist! sounds good does it not.

Nice report , it's a fantastic route . I hope you have similar weather arranged for your big day