Apologies as this is a work in progress, I pressed 'submit' instead of 'save draft'

With one free day every two weeks I need to plan my day carefully, my previous trip up north to climb 'The Ben' had saw me return via the spectacular West Highland line, my original plan was to sleep on the train home however the scenery proved this to be impossible and I spent the whole trip gazing out of the window in awe.

The train had not long left Bridge of Orchy station and was trundling south when the awesome conical Beinn Dorain came into full view to gasps from my fellow passengers, I knew then that this would be my next Munro. Beinn Dorain from the train

As soon as I got home to Ardrossan I immediately referred to 'Walkhighlands' and looked up previous walk reports, deciding that if I was going to tackle it that it would be via public transport and not by a tortuous car journey, my day off is usually a Sunday, so that ruled out the train, citylink provide a pretty good (and cheap) service, so using the 'Traveline Scotland' app on my phone I was able to plan my connections and arrive at the Bridge of Orchy hotel by 11am. 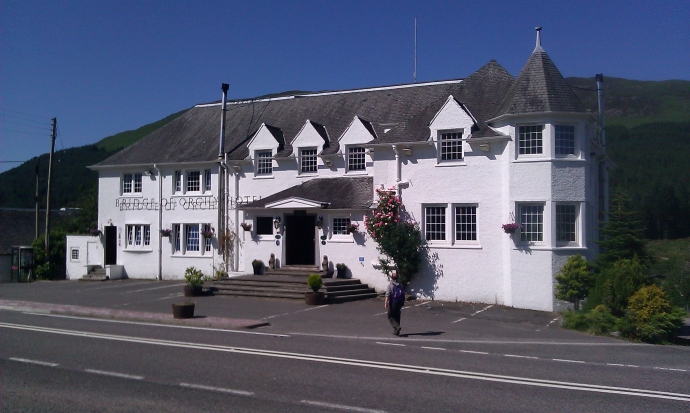 The path to the bealach

It was a tremendously hot day so I packed extra water and brought a few packets of salted nuts which I found to really help control my hydration, I reached the bealach cairn in exactly an hour, the slight cooling breeze was more than welcome, after a wee drink and a check of the map I set off towards Beinn Dorain Lochan with 'The Ben' in the background

Having only started climbing munros at the beginning of the year I've been amazed at my new found geographical knowledge and the ability to identify distant hills (Tip: if in doubt, always say Schiehallion) The Ben and Carn Mor Dearg

I've been trying to use public transport as much as possible as the thought of a 150 mile drive home while knackered just doesn't bear thinking about, especially as I can have a wee pint just after coming off the hill (then have a sleep on the bus/train), this involves careful planning and a knowledge of the various bus routes and their vicinity to the hills I want to climb, hopefully Ben Cruachan will be my next munro and is well placed served by the Glasgow to Oban citylink service RK_gpx _2013-07-21_1115.gpx Open full screen  NB: Walkhighlands is not responsible for the accuracy of gpx files in users posts

More photos to be added shortly

Glad you managed this, how was it on the Sunday heat wise? I hope you didn't use my times as a benchmark for doing it

The heat was quite bad until I reached the bealach where there was a cooling breeze, decided against Beinn an Dothaidh as I wanted to spend some time on Beinn Dorain and for a wee pint or two at the hotel before catching my bus back........cracking visibility though

Hi there
Was lovely to meet you last Sunday. Hope you have many more days like that in the hills - you passed us on our way to Beinn an Daothaidh and met up again outside the hotel on our way back to car.
Best wishes
Fiona

Hi Fiona,
Nice to meet you too, hopefully catch a few more clear days like that this year, it's been a great year for hill walking.......so far