Scree-ming for Mercy on Sgurr Alasdair

Scree-ming for Mercy on Sgurr Alasdair

21.07.2013 Sgurr Alasdair.gpx Open full screen  NB: Walkhighlands is not responsible for the accuracy of gpx files in users posts

Day 2 of a smashingly sunny weekend on Skye. Awoke refreshed after a tree-splitting Saturday on Bruche na Frithe and a bonus of Am Baister.
Having awoken early, the tranquility of my tent was disturbed by some inconsiderate jibbering on his phone. Not a great issue as I was already awake but an annoyance nonetheless. Time to get packed up and exit the tent.
As with Saturday morning, once past the midges loitering in the shadowy shelter of my tent porch it was a beautiful sunrise.. No need or time to hang around, some breakfast then off to Glen Brittle to rendezvous with Gavin99. 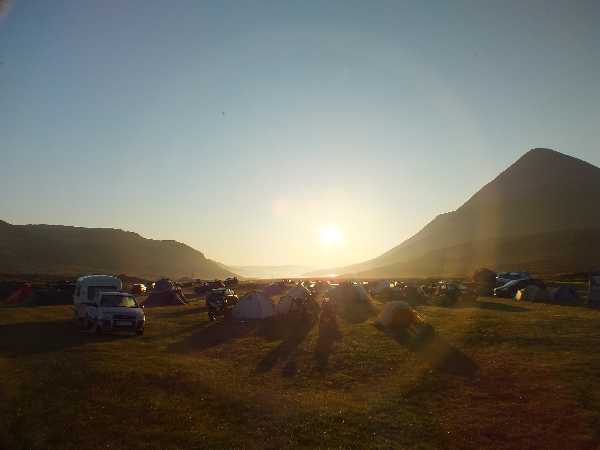 How many Skye mornings like this must you get a year?

I'd been on Skye for a morning before after one of the Kintail meets, but a combination of howling wind, driving rain and burns in spate had me adandon my ascent of Bla Bheinn and I saw very little of the Island.
Wonderful views on the drive down to Glen Brittle and a fine looking campsite at the end of it. A future stay will be had here, I've no doubt of that.
Parked up, suite, booted, suncreamed and smidged and it was time to set off. I didn't realise until later that you get a sneaky peek of the great stone chute from the car park.

Pleasant strolling (cleg-swatting aside) and great views to be seen. Raasay, Scalpay and Canna all showing themselves. 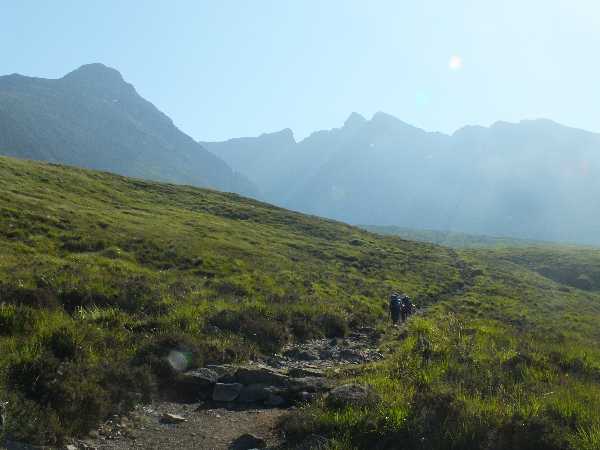 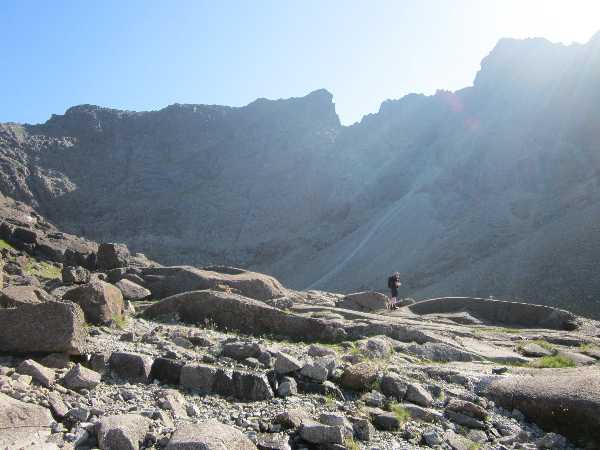 Quick enough work up to the lochan which is well worth the trek on it's own. It's a beautiful corrie, especially in the sunshine.Wonderful blue lochan backed by scree-covered slopes topped with jaggy peaks. Turn around and you get the views out to the water and the isles.

A welcome break in the shade for lunch, some pics and then it was time to head for the shadow scree. To say I didn't like the look of the great scree chute is putting it lightly! I left Gavin99 to continue on for the scree while I cut away to the rocks to the southside of it. This was far more pleasurable, even if it did mean I'd still have to cut over to the scree to ascend the narrow gully leading to the saddle.
Slow and torturous going for me, but soon enough basking in both relief and sunshine on reaching the top of the saddle. 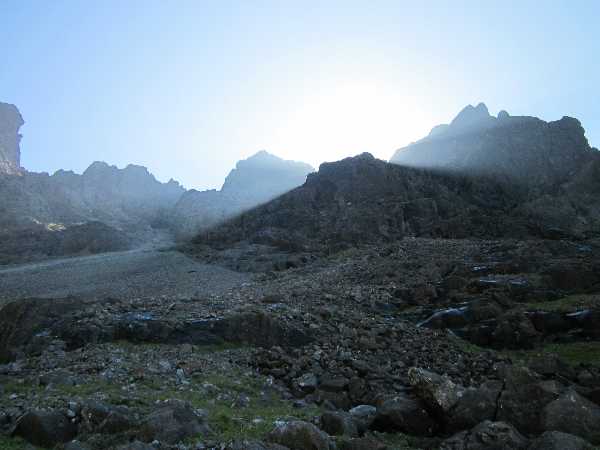 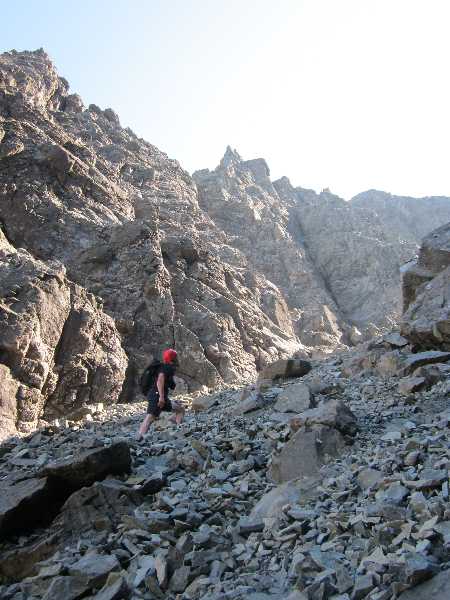 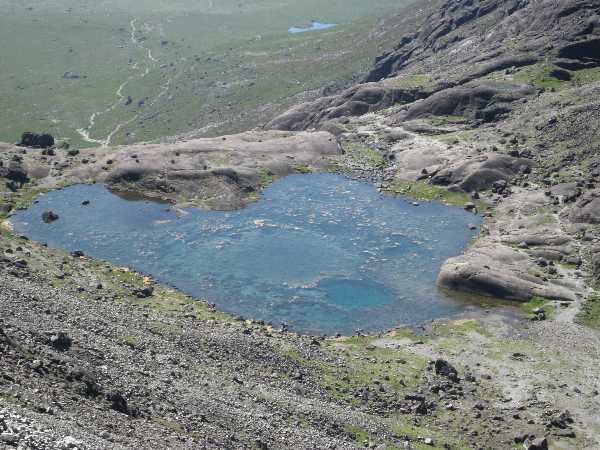 The lochan far below.

Rucksacks off for the quick scramble up to the summit for pics. Awesome views, the isles all those Cuillin peaks, the Knoydart hills all to be seen. It definitely felt worth all the toil. 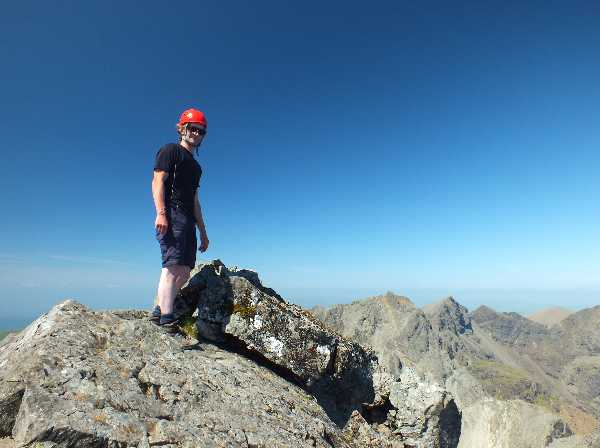 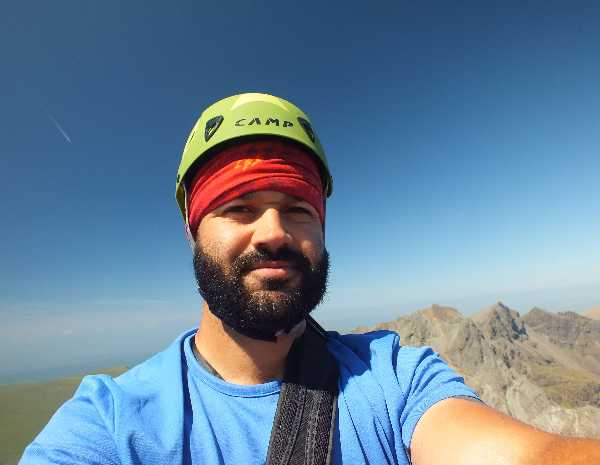 Lunch and shadow sheltered in a comfy corner of the saddle before it was time for the dreaded descent.

Gavin99 danced back down the scree to the lochan to bask in the sunshine. My route wasn't so bad after all. Down the scree as far as I had to, then over to the rocks north of the scree chute for the rest of the descent.
Boy did it feel good to be back on the floor of the corrie again
Basked in sunshine and glory by the lochan, a few people around by this time enjoying the day and more on their way up. 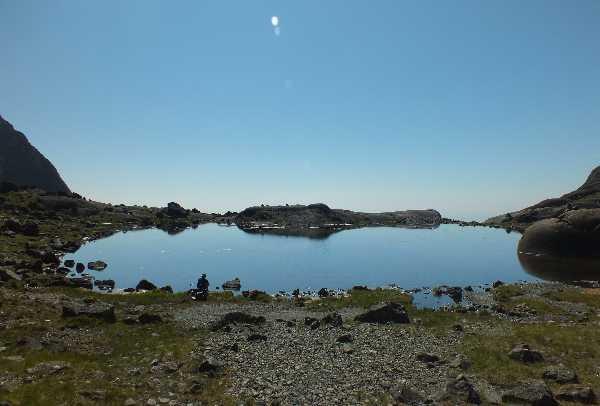 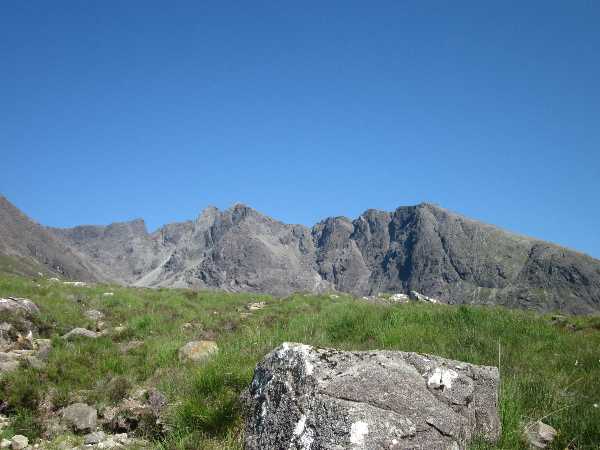 Looking back at the day's conquest.

Nothing left now other than to head back down towards the car, reflecting on a fine weekend's fun.
Bid farewell to Gavin99, faffed about a bit, took some pics and then it was time to make the long drive home. 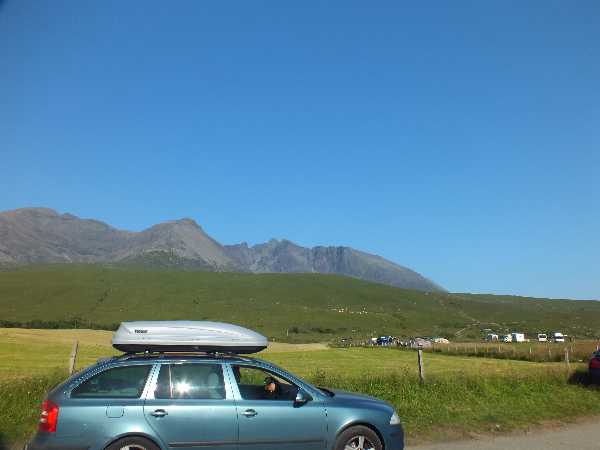 Looking back from the car park, scree shute but a memory in the distance.

3 Cuillin Munros, 2 days of sun-drenched fun and not even a single dram drunk.

Bye-bye Skye, until next time. Next month!

Wonderful!, nathan head straight for Glen Brittle campsite next time, wonderful power showers, and not a bad wee shoppie. Glad to see Gavin and you have the helmets on, especially since you went up the great stone chute

Once you have been, you want to go back again and again

The views from the top are something else in all directions.

nathan79 wrote:
3 Cuillin Munros, 2 days of sun-drenched fun and not even a single dram drunk.

Cracking photos Nathan...your getting out and about big time

. Looked like some great weather - the kind that most people have to visit repeatedly to get.

Lovely stuff Nathan, and lovely to see the sun beaming down on Skye, this was almost perfect....... but no wee dram at all

Really do feel like I was spoiled with a weekend of nowt other than blazing sunshine. I'm not holding my breath for a repeat of those conditions come the August WH meet. May just prop up the bar instead.

Great report, nathan - stunning area and even better when you get weather like this - just missed you by a few days. The stone chute's hard enough on the descent - must've been hard going on the ascent so heading for the side sounded a good idea - cheers