Having finally got over to Arran, it was a day of two halves on Goat Fell for the first excursion.

For part one, we set off from Cladach to wend our way through the brewery buildings before following the signposted path through the woods – and on, ever upwards, following the footsteps of many, on the well maintained, easily angled path all the way to the top. It proved to be the most populated hill I’ve been on for quite a while: from enthusiastic five-year olds, through reluctant teenagers, to plenty of us oldies. Looking back to Brodick

Cloud cover was a blessing for our ascent, but it took a while to disperse after we reached the top. However, gradually the reward for relatively unchallenging efforts emerged. Fine views to the east and north contrasted starkly with the mysterious stretches of ridge popping in and out of the cloud to the west. Back up the north ridge of Goat Fell

We stepped into a different world going over to North Goat Fell and scrambling down to The Saddle. The easy path, the open vistas and the seascapes to the east were left behind in exchange for pinnacles and walls that plunged to the deep long valleys of Rosa and Sannox below. 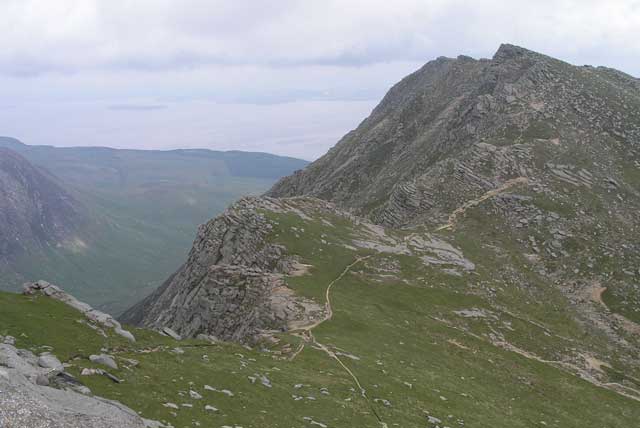 With Cir Mhor rearing up ahead – but to be left for another day – the way across and then down had interest, lacked people, and provided the occasional spot for the “money shot” of the day. Pinnacle posing - with Cir Mhor in the background

A handful of others were met at The Saddle, but then the walk out along Glen Rosa, with temptingly deep pools for wearying feet, was another lonesome wander. Where was everybody? A footbridge appeared just before the Garbh Allt joined Glenrosa Water, so we could cross and make the direct return to Cladach, ending what had been a real eye-opener for the scale of the mountains – not hills – on Arran.

The ridge, from end to end.

Sounds like you had a great day for it, the route up to North Goat Fell from Sannox which traverses the Cioche na h'Oighe (maidens breasts) is thoroughly recommended, then maybe a further ascent from The Saddle up over Cir Mhor to Caisteal Abhail if you're feeling fit enough

Smashing,,what you say about a different world beyond Goat Fell is soooooo true,,the most amazing, spectacular place. Planning a return trip for the other 2 corbetts in the range there. BT and CA. Superb

When I mapped the route on google map, it said some bit of the route along Glenrosa water is private route, so can you still go down along the route?

Might be a private road for vehicles. .unlikely to refer to walkers. 😀