MWIS forecast, 12-14* at 900m, 90% chance of clear summits, rain showers and lowering cloud PM.
Nearly right again, cloud free and 14.5* at 07.35 as we left the cars, by the time we had cleared the river path and started up the ridge it was in the full glare of a rapidly heating sunny day.

A steady walk with lots of short breaks as the heat built, we watched some cloud forming on the tops and were grateful when it blanked out the sun. Made the top at 11.00. The cloud at the summit made navigation a little difficult, how hard can it be on a narrow ridge to follow the wrong path unless you really are aiming for Meall Cruidh. Anyhow after a little faffing about we went back to the cairn and found the correct path dropping steeply off behind it. All the way along the ridge to Stob Coire Dheirg and the buttresses was blind until we started to loose height properly. Arrived at the Lochain Ghaineamhaich bealach at 12.20 and a lunch stop Take the lower path from the bealach if heading to Beinn nan Aighenan as the top one leads into a boulder field , the start of the lower path is a little indistinct and you can make out where people have started high then dropped down. We played shadow chasing all the way to and from Bheinn Aighenan, as a cloud cast a cooling shadow on the ground we were out of sync with it and stayed in the glare of the sun. Topped out at 14.00 and had a chat with two walkers from Cumbernauld. It was a slow hot walk back to the bealach and across Meall nam Tri Tighearnan to Glass Bheinn Mhor
Arrived at 16.35 and definately feeling worse for wear phoned home to say we were behind schedule - no sympathy there. Off GBM to bealach at head of Coire Odhar

It was a relief to get down into Coire Odhar, soak the hat in the cold water and make like Henry Cooper and splash it all over. Back to the car at 19.20, eleven and three quarter hours, no prizes for speed but we were round and in one piece. Thanks to Ian's organisational skills a cold bottle of Bud was waiting (and ten million midges).

Good report and pics Kev detailed as ever by the time I got back driving Miss Daisy a couple of beers for me no kebabs Maureen thought it was the car battery. Plenty puffing and pechting on that walk atleast they are done . Added a few pics This rock will do for the garden 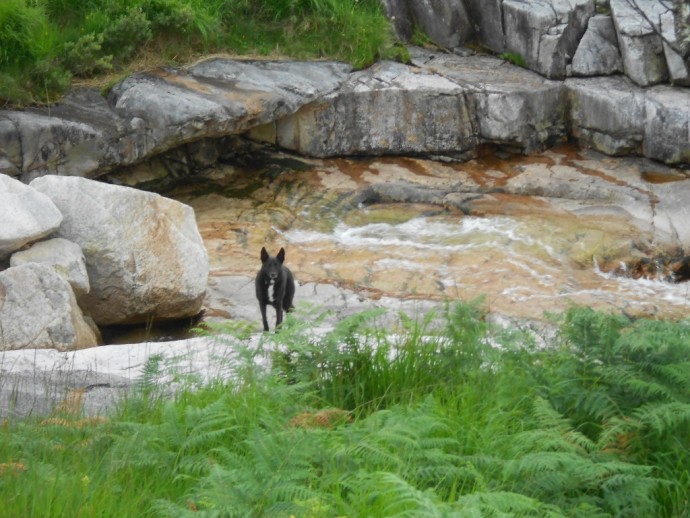 one of my favourite areas and you got quite a good day for it. Certainly a hard haul up Ben Starav but well worth it - cheers

Cold beer is a must after these 3 Kev