our_route.gpx Open full screen  NB: Walkhighlands is not responsible for the accuracy of gpx files in users posts
I'd wanted to go up Beinn Bhuidhe for quite a while as it was the last of the Munros I hadn't climbed on the road to Inverary. As ever I looked around to see if it was climbable in conjunction with any other hills while I was in the area and after briefly considering coming in from the north across a Graham or doing a circuit with the Corbett Meall an Fhudair off to the east, I settled on the Sub2000' across Glen Shira, especially as you could cycle closer to a reasonable place to start and because I didn't think there'd be any paths to follow at all from this side. There weren't any paths all day, which is always a big tick on my checklist if possible, but there was one drawback to this route which happened very early on...

I parked near the cemetary at the foot of Glen Shira where there is plenty of space to park and a sign requesting people don't drive any further up the road. It's a good road all the way up that services the power station at the dams of Lochan Shira and Lochan Sron Mor. There's a lot of felling going on in the forests high up the glen, so watch out for massive trucks charging up and down the poor wee road. The road up Glen Shira passes several lovely cottages and a ruined church now in use as a collapsing barn, but the most beautiful thing in the valley were the lower woodlands, all wonderfully carpeted with bluebells. I'd planned to cycle up to where the map marks a footbridge over the River Shira opposite Drimlee and cycled on and on, expecting to see it on my left, but as the track started to climb and then enter a series of hairpins I realised I must have cycled straight past said footbridge. As my route down would be along this track anyway I ditched the bike and walked back still expecting a path and a footbridge over the river. I walked back down and went all the way past Drimlee and was starting to get suspicious. I walked back up the track again until I was sure I was where the path to the bridge should be and headed down to the river. The picture below shows what I found. All that was left of the bridge was a wire over a 20ft drop and a waterfall. Hmmm. I walked a little way up the river and decided that as the other option was now a 4km round trip to get to the other side of the river the best thing to do was just wade it. So I did. I think, a month on now, my feet have just about recovered from spending a day squelching for the next 18km... I'd still recommend this route to climb Beinn Ghlas, but go prepared to ford the stream or cycle up to Drimlee and only wade the river on the way back - less time with wet feet then. Obviously if the river is quite high this is out and the bridge at Elrigbeag is the only option without going all the way up to the first dam.

The walk up through the bluebell woods with lots of little singing birdies was great along the stream up to the sheepfold marked on the 1:25000 where there were the first views down Glen Shira. 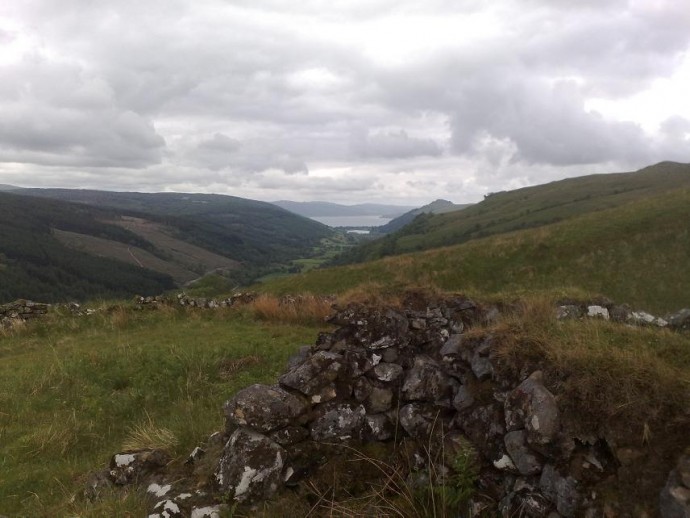 From there I just struck straight up the hill towards the top of Beinn Ghlas - the bog on the shoulder wasn't very boggy today and it's only near the top that there's anything to make you deviate from a straight line. Over Lochan Shira towards Ben Lui in the cloud

On days when there's a fair amount of clag around, I really like climbing these wee hills. They often give better views than the hidden tops of the Munros and Corbetts round about and so it was to prove today.

Descending towards the dams at the head of Glen Shira wasn't entirely straightforward, the ground steepens significantly for a short while around Creag an Fhithich. The jumble of rocks at the bottom of it also give a great spot for sitting listening to the little birdies that make their home there, although they never seemed to sit still for me to actually see them. An illustration of the not-without-character character of Beinn Ghlas looking back from the NE. I then crossed over the dams, scared the life out of some workmen by appearing from behind their portaloo which was blocking the path, and cut straight up Beinn an t-Sithein. This is again a straightforward straight up walk with nothing to avoid, but gives good views back to Beinn Cruachan. Top of Beinn an t-Sithein with Beinn Bhuidhe now hidden

The walk between this top and the top of Beinn Bhuidhe was pretty lumpy, crossing several wee streams with their gullies meaning it wasn't always up to the top, but up and down as well, getting progressively more steep until the summit ridge was reached. The weather really deteriorated at the top so the bloke I met up there in his jeans looked a wee bit miserable, and I'd also got the compass out to check on my direction of travel for the last half km. After perfunctory sandwiches in the rain, I headed off down the up and downy SW spur, eventually appearing out of the cloud near the named top of Stac a Chuirn, where I could finally see what I'd been missing, in some directions anyway. Stac a Chuirn top, over Beinn an t-Sithein to Ben Cruachan

Getting off this spur means descending through the forestry at its SW end. I hadn't really spotted a decent way down from Beinn Ghlas, but had seen plenty of other rides in the woods so was hoping for the best to get down without hacking through too much felling or impenetrable conifers. It wasn't too bad, from the clearing in the woods pictured below there was a stream with sufficient clear space around it which could be followed almost all the way back down to the track above Rob Roy's House (which I unfortunately didn't get round to visiting - I'd guess it's a ruin as, again, the track marked on the map to it doesn't exist anymore). From the wee quarry where I popped back out onto the track, near the bridge over Brannie Burn, it's a simple stroll back down to bike on the hairpins and a downhill cycle to the car at the bottom of the glen. 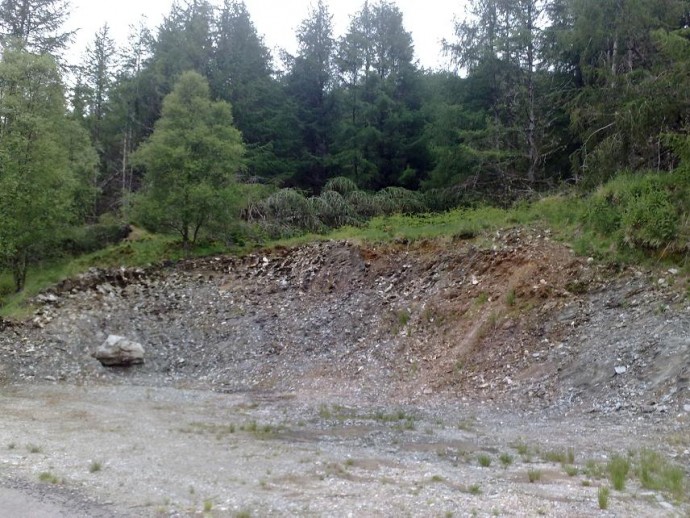 Where to go up or where you appear when you come down.

Was it worth adding Beinn Ghlas on to the walk? Yes. I took more photos and took more time over that wee hill than I did on the claggy Beinn Bhuidhe. It didn't feel contrived, but a proper round.

So if you want to avoid the rather steep tourist route and all paths once out onto the open hillside and are prepared to put up with wet feet and a km of tussocky spruce woodland on the way back, I'd definitely recommend this route.

Nice report: I'd like to do Beinn Bhuidhe from the Shira side sometime, and your directions will come in very handy!

I liked that - a nice change from the usual route. I have plans to include it on a multi-day trip through the Grahams and Corbett I haven't done here, probably approaching from the north.

Now, that's interesting! I still have Beinn Bhuidhe to do (the last of the Arrochar Alps on my target list now), and I'd wondered whether it'd be possible to combine it with Beinn Ghlas for a wee bonus S2K Marilyn (and a rather remote and obscure one at that, which is always nice). Your report confirms that it is ... plenty invaluable advice re the missing bridge etc too.
I'm definitely going to have a look at this route sometime myself now

Thank you for the Lousewort identification, jmarkb. I'd been seeing it all over the place this year and wasn't able to track it down.

I did look into doing Beinn Bhuidhe with one or other of the Grahams off to the North, but I decided a camp would be necessary to do that well. I look forward to hearing how it goes, malky_c.

And bobble_hat_kenny, I hope you enjoy it as much as I did, but with drier feet.