A second Beinn Dearg within the space of six days

A second Beinn Dearg within the space of six days


I had another day pass out and after nailing the Beinn Dearg Graham last week, my thoughts turned to its Corbett namesake in Glen Lyon, one of my nearest unclaimed Corbetts. However, with a reasonable looking forecast for the last day of July (although I confess I hadn't paid the forecast all that much attention), my thoughts wandered to Meall an Fhudair and Beinn Damhain from Glen Falloch.

I set off from Perth shortly after 9 but the further west I went, the more the weather deteriorated. By the time I was climbing up through Glen Ogle, the windscreen wipers were seeing some action and it looked a bit grim over Crianlarich way and beyond. To my right and over my right shoulder, it seemed noticeably better, so, with the Glen Lyon OS sheet in the glove compartment anyway, I hastily changed my plans and turned off at the Lix Toll. Plan A was back on.

I took the Ben Lawers dam road over to Bridge of Balgie and as I gained height, I could see that I had made the right call. The carparks for Lawers and Tarmachan both had quite a few cars in them and a few cars with foreign plates were pulled in at various passing places for a spot of photography.

However, the main obstacle on the minor road was a stubborn group of heilan coos just before Bridge of Balgie who steadfastly refused to move. Given the size of the horns on some of them, I was a bit wary of being too hasty and pushing them to much, for fear that they might take umbrage and trash my motor. Eventually, after I had spent some time inching forward, all but one younger, hornless beast moved aside, but this one needed a gentle prod from my front bumper before it deigned to move and let me past. Beinn Dearg from the approach down into Bridge of Balgie

This obstacle taken care of, my continued progress to Innerwick went unimpeded, although I had only just pulled in off the narrow Glen Lyon road into the parking area when a speeding fire engine with siren blaring went flying by in the Loch Lyon direction.

I availed myself of the facilities kindly provided by Meggernie Estate before getting ready for the off. I spoke briefly to an older woman who was there with her daughter and two grandchildren and she informed me that they were having a picnic and visiting the grave of her brother in the churchyard of Innerwick Kirk. We wished one another a good day and I was off on the track on the west side of the burn.

I had debated with myself which route to use, both ascent and descent, but in the end I decided to head up the Lairig Ghallabhaich and the Public Right of Way to Loch Rannoch. Crossing the Allt and heading up the Lairig

Memories came back of a cracking outing I had 3 years ago on a stonking summer day when I did Meall a'Mhuic and Cam Chreag with two dogs - Lucy and Rosie (a friend's Boxer who was staying with us while her owner was on holiday). Whereas that day I headed over the high point of the Kirk Road and descended a fair distance before taking to the slopes of Meall a'Mhuic, today would call for me to leave the relative comfort and easiness of the track a bit earlier.

I opted not to take the right fork up through the forestry on three counts - 1) the flies (which were out in force today, although mercifully there was no sign of any of the clegs that seem to have plagued this summer) might be less numerous if I continued on the main track and thus away from the forestry, 2) I might get earlier views north and west towards Loch Rannoch if I climbed to the high point of the track and took to the western slopes of Beinn Dearg from there, and c) it was a bit of a thought to have to leave the comfort of this particular track at all, especially as it was about to start dropping down soon! Up Glen Lyon from the high point on the Kirk Road

Anyway, shortly after the stream that cuts a decent size of gully as it descends the western slopes of Beinn Dearg, I took to the heather and started my ascent proper. The first few hundred yards or so were tough going and required a fair bit of arduous bushwhacking in places, but the going soon got better as the ascent eased towards Meall Glas. Tarmachan Ridge and Ghaordaidh from the ascent of Meall Glas The views were now opening up across the Lawers range and the Tarmachan Ridge, as well as into the upper reaches of Glen Lyon. As I crossed the flat, peat haggy area between Meall Glas and the rounded rise of the Beinn Dearg summit cone, the figure of a lone walker stood out as he descended from the Corbett and rounded the head of the Cul Lairig, framed by the bold outlines of Meall Garbh, An Stuc and Ben Lawers across Glen Lyon. Lawers group across the high moorland

With expansive views now across Loch Rannoch and up through Drumochter and across the hills around Ben Alder, I climbed the easy slopes up to the first cairn at the northern end of the flat summit plateau before making my way over to the true Corbett summit cairn to the south. I took a few photos before settling down to lunch - not quite as fancy as my Beinn a'Chasteil lunch from the other week but quite satisfactory nonetheless. 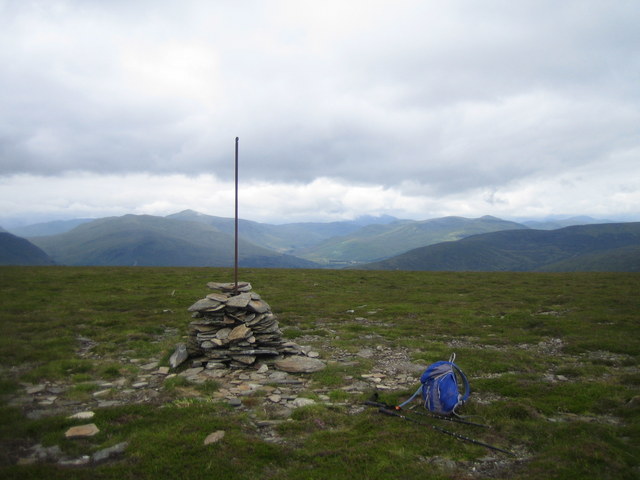 I hadn't felt it chilly at all today but after 10 minutes or so I had to throw my Rab softshell windcheater on to combat the stiffening chilly wind. Lunch polished off, I got up to gather my bits and pieces together and fire off a few more photos, but my fingers had turned white and unfeeling, and they struggled to operate the camera effectively. I quickly pulled on my silk glove liners (the closest thing to gloves I actually had) and buried my mitts in my pockets for 5 minutes or so before heading off. Down the Cul Lairig Carn Gorm and the pink screes of Beinn Dearg

I had decided to head out around the head of the Cul Lairig and over Creag Ard, but it was only when I got right out to the far end of the arm that juts out high above the crags that drop down into Glen Lyon that I decided to tackle the descent straight on, rather than taking the easier line to the west. To be honest, had I been with my wife, my brother, a Duke of Edinburgh group, or anyone whose experience, head for exposure or footwork I was in any doubts about, I would most certainly not have entertained this descent, but for me on my own, it was well within my comfort zone but still added a nice little bit of spice to an otherwise fairly mundane, rounded lump of a hill. The upper crags of Creag Ard East down Glen Lyon from the descent of Creag Ard Interesting looking route up onto An Stuc Once down into the glen, all that remained was to negotiate the gate in the wall that looked like it hadn't been used for some considerable time and then make the short yomp back along the road to the car at Innerwick. Not the easiest gate to negotiate! 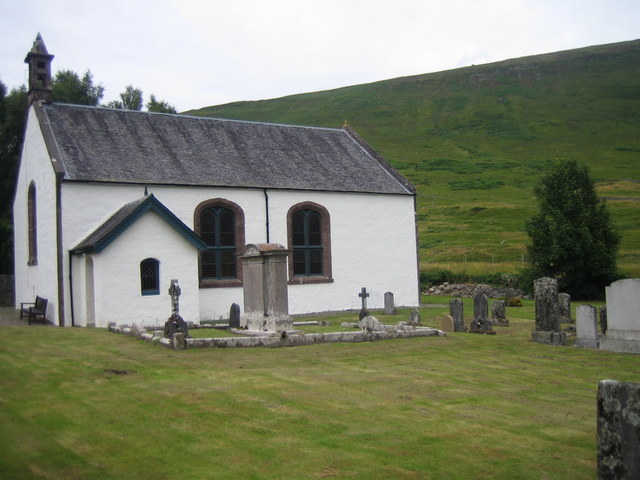 Beinn Deargs must be like buses, eh Graeme ?
Wait ages for one then half a dozen come at the same time

Great report Graeme, I love these rounded lumps and the more I see of them from afar the more I miss them. I had a touch of the 'winter taster' on a summit last week complete with fleece donning and freezing fingers.....is it that time of year already

Nice to see your day passes have increased

I had a long day up this way doing a circuit. You were very close to the Graham, how did you manage not to give in to the temptation?