In 2007 I had recently moved to Inverness but my wife (then fiance) still lived in Dundee. Plenty of to-ing and fro-ing made for a few handy hill opportunities. This was one of my favourite.

our_route.gpx Open full screen  NB: Walkhighlands is not responsible for the accuracy of gpx files in users posts
Weather was looking good, and with a full moon as well, things were looking promising for a friday night hike. Parked up at the Baddoch track on the Glen Shee road at about 8ish. I was headed for the Callater Stables bothy, but the good visibility tempted me onto Creag nan Gabhar first. After starting on the stalkers path, I crossed the burn and went straight up the side of the hill. It was heathery going at first, but that shortened as height was gained. Unbelievably half way up this slope I found a copy of a map! Not the one for the area but an adjacent one. The chances of me finding this while stumbling over a pathless hillside in the dark were somewhat low to say the least. If anyone lost a map 3 years ago, let me know!

By 9 I was on the summit, and the views were spectacular. My photos don't do it justice as I didn't have a tripod, and tried sharpening the image on photoshop, but you really could see everything, from the back of Lochnagar to the highest Cairngorms, to the Glenshee ski centre. The exceptional clearness of the sky, the full moon and the dusting of snow on the summits all helped. A short break and a simple descent following a vaguely trodden path took me to the bothy in no time without even needing to break the torch out. I clattered about and managed to wake up the only other resident, so decided to head outside to cook my tea. Despite the sub-zero temperatures, I couldn't pull myself away from the impressive night.

Sadly there was no fireplace at this bothy (I'm lousy at lighting fires anyway), but I managed to get a reasonable night's sleep by wearing all my clothes in my rather thin sleeping bag. 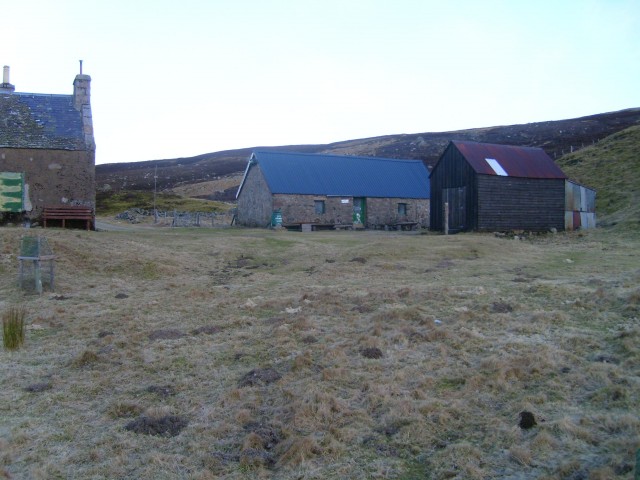 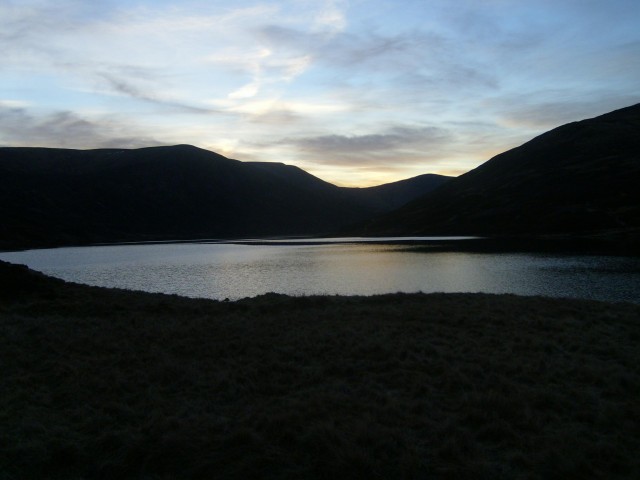 The next morning I was up at dawn, and had a quick chat with the other guy before getting on my way. He had spent the previous night in Gelder Shiel, and was bagging as many Munros in the area as he could. My route took me along Jocks's road, which skirted Loch Callater. The path along the valley floor was very good, and the weather was looking promising for the second day in a row. There were intriguing views into Coire Kander, and the path all but disappeared just before the final climb onto the plateau. 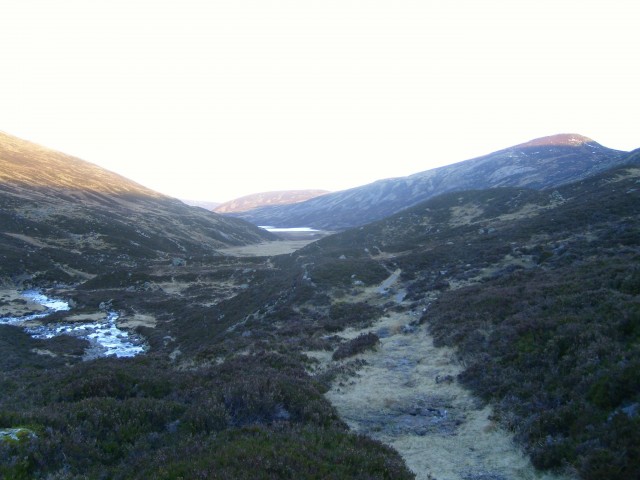 Looking back along Jock's Road 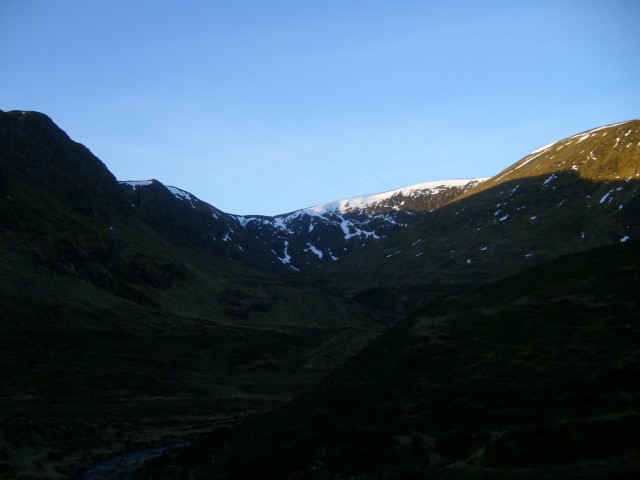 This was still on fairly good ground though, and before long I was on the plateau in the morning sun. Another short hop took me to Tolmount, where I stopped for a short break. 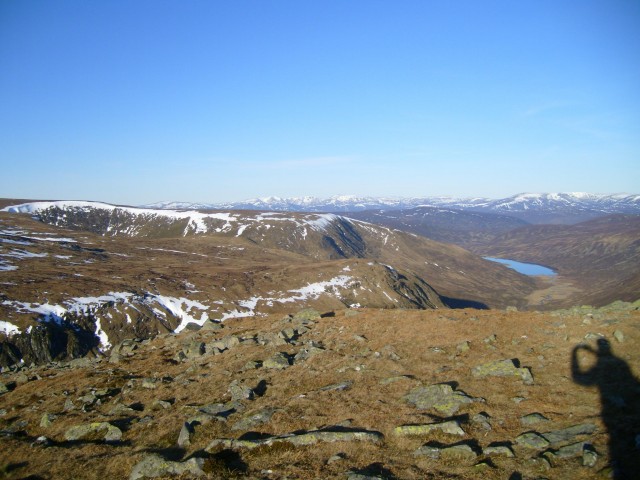 Sunlight on the plateau, looking towards Carn an Tuirc Across the wilderness to Lochnagar 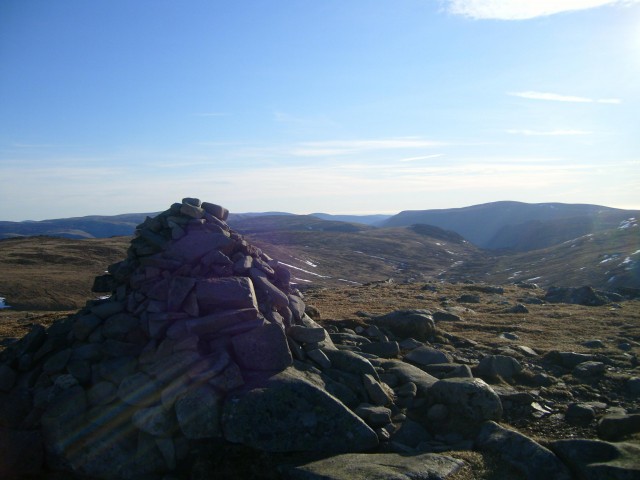 From Tolmount down to Glen Doll and Driesh 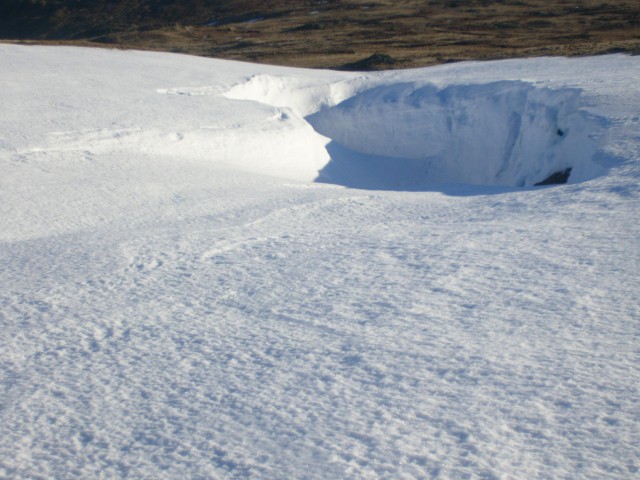 Remains of the snow

I really love this area of high plateau which separates Lochnagar from Dreish, Mayar and the Glen Shee hills. It it is really just a rolling emptiness, but you can easily forget where you are ant where you are going. I did for a bit, but then got a move on, contouring Cairn of Claise to Carn an Tuirc. This is really the only point in the whole walk where I actually crossed any snow, sespite large patches lying in various hollows. Views to Cairn Toul and the central Cairngorms were particualry good, and I wished they had been as good when I had done a recent ascent of the Angel's Ridge. That was something of a bad weather epic, of which more in a future report maybe... 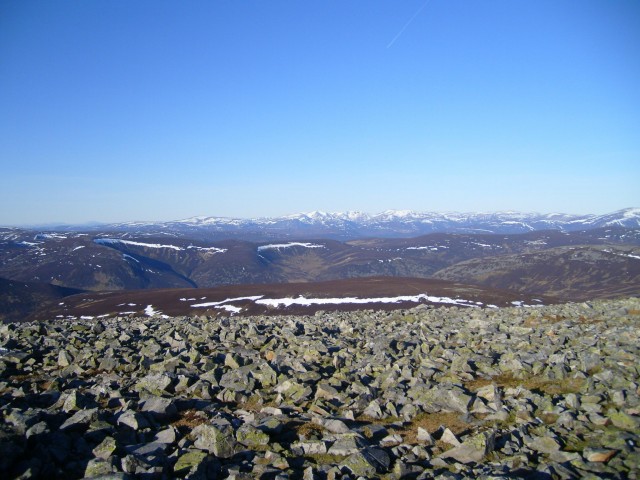 Cairngorms from Carn an Tuirc 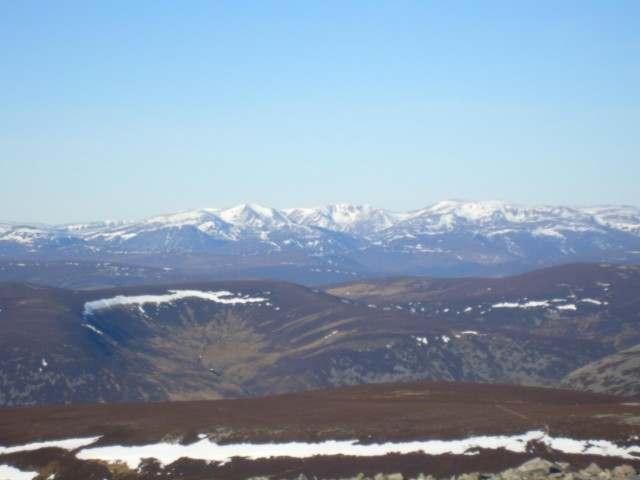 Zoom in on Cairn Toul, Braeriach and Ben Macdui Across the Cairn of Asda to Glas Tulaichean

On Cairn an Tuirc, other walkers were up and about, and I stopped for a quick chat. After the summit, it was a steepish descent towards Carn Dubh, passing the building marked on the map. I had always wondered what this was. The answer? Who knows. Just a few planks of wood and something of a frame remained. Possibly a stalkers bothy, or maybe an early ski development.

The route from here back to the car contained some bog and heather bashing, but nothing too extreme. I was back at the car before 1, and over to sunny Dundee for a late lunch. A brilliant way to wring the most out of the weekend!

Re: Overnight in Glen Callater

That's one great thing about winter is when the bogs are frozen! A beautiful plateau - I like all the wildernessy Cairngorm plateau areas...