Bhuirdh and Avon from Tomintoul with an Artic Snow Bunting

Bhuirdh and Avon from Tomintoul with an Artic Snow Bunting


A flexi day from work provided a good opportunity for a stroll in the hills. Decisions…This time I chose to head for Tomintoul and aim for Beinn a Bhuirdh and Ben Avon.

60 miles later and a short drive along the main road through the village before turning right up Delnabo Road I arrived at the Queens view car park, (No sign of any greedy cash collection machines here). Coincidentally it is not possible to drive any further as the estate prohibits unauthorised vehicle access. I got on the bike and set off up the glen at 0745. The first section is a sound tar surface and makes for good going. The road passes through farms and estate houses with a variety of flora and fauna on display. The tarred surface continues up the glen to 1km beyond the little ruin at Dalestie, where it changes to type one. The road condition is still better than some main roads I have driven. The private lodge at Inchrory is next on the road, what a grand secluded property. The track then crossed a bridge spanning the water to reach the Linn of Avon, which featured a fine tumbling river and place to have a wee dip. This site would make a nice camp. You can set off from here up to Ben Avon although I decided to carry on for a further 5km to the former Ponymans shelter. The track climbed up the hillside and after another big bridge crossing there were grand views across to Ben Avon and company. over to the big brae and co final section leading to ponymans shelter and start of walk

The ponymans shelter hut was reached at 930. Continued over the wobbly bridge then aimed SW up toward the North ridge of Stob an t Sluichd 1107m. wobbly bridge and view up to ben Avon and the sneck

The terrain was easy going with some interesting granite tor shapes en route. nice shapes in granite tor on ridge of SatS

The summit is reached after a sharp ascent over boulders. final pull up on to summit of SatS 1107m

The views across to Ben Avon and Slochd Mor corrie were impressive. The horizon seemed to be lined with sporadically located tor formations over the vast 30km2 plateau. across to Ben Avon from ridge of Stob an t Sluichd 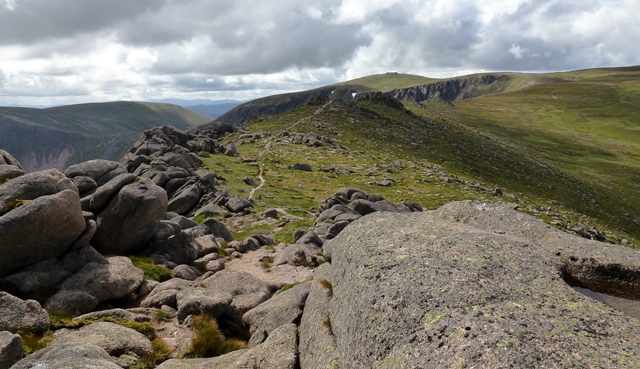 route ahead with Garbh Choire on left hand side Further along the ridge the ruin of an aircraft was found. A plaque was located on a nearby boulder. Crash site with engines on ground

Subsequent research confirmed this to be the site of a crash on 11 Jan 1945. The Oxford PH404 had taken off from Tain en route to RAF Hornchurch and contained 5 Czech airmen. They encountered bad weather and the plane impacted with the hill. Records state that they were only 3m short of altitude to clear the hill. Four perished immediately in the crash whilst one who sustained a serious head injury survived the initial impact only to die later on the hill. It was surmised that he had wrapped himself up in the other airmen clothes to keep warm to wait on a rescue that never came. RAF assumed the plane went missing over the sea. The bodies and wreckage were discovered some 7 months later by two hill walkers. Further details can be viewed at http://www.yorkshire-aircraft.co.uk/aircraft/ph404.html
I proceeded along the broad plateau aiming direct for the North top of BaB. The rim of the Coire nan Clach was a useful permanent landmark to help with navigation, going beyond that in bad weather would be foolhardy.

Back over vast plateau looking East toward Ben Avon south to A Choich and Dubh lochan

The summit cairn was set back about 150m from the corrie edge and was reached at 1215 Three lads from Derby had just arrived after climbing from the South. We had a chat and continued on toward Ben Avon. On the descent to the Bealach at 970m, known as the “sneck”, we got a chance to see a Snow Bunting bird up close. It seemed such a tiny wee bird to fly to and from the Artic. Not sure whether I should have fed the wee thing a bit of sandwich (Wholemeal bread, butter, mustard, tomato, smoked ham and cheddar cheese) or not. I played safe and refrained from poisoning the wee SB. Snow bunting on descent to the sneck Snow bunting from the Artic A sharp rise to the east takes you to the plateau. View back west from Ben Avon plateau with the sneck below

The final 1km led to the summit tor which was easily scrambled to reach true summit.The 360 views were superb; the only blight was the incoming rain clouds. I descended North via the 1136m top then contoured the steep scree covered west cliffs of Stob Bac an Fhuran and down the glen to reach the shelter at 1500. View down descent route back to ponymans shelter

The door was open, I wondered who had visited since I had been there. Simple things and simple minds…
I uplifted the bike and set sail on the return leg. Some wind assistance helped to keep me ahead of the rain in the race to the car. A brief stop at the Linn of Avon allowed more photos in the rain before the final section. Linn of Avon in the rain

I got ahead of the rain again then passed two walkers fully laden, I felt guilty on the bike and was tempted to offer to carry a pack to the car park. They spoke in a foreign language so I declined to make the offer in case it got lost in translation. I assumed they had been the ones to have opened the door in the pony mans shelter, an answer to the enigma. At the estate farm the locked gate was remotely opened for me by one of the workers. Nice one, just a shame he waited until I had stopped and lost my uphill momentum, LOL.
Then black clouds appeared ahead of me and the heavens opened. The rain just poured over me and within seconds the road surface was flash flooded. I could see the steam coming off me. I was glad that I only had shorts and a tee short on, but alas no dry clothes in the bag or car. So it was a wet and humid end to a cracking day on these remote hills. I can recommend that it is well worth a visit to this Glen.
I would say that it would be possible to continue straight through Glen Avon if one was considering a route from Tomintoul to the Ski Centre to wild camp and stroll around the cairn gorms. It may even be possible to get a public bus back from Aviemore to Tomintoul to collect the car or vice versa.

Re: Bhuirdh and Avon from Tomintoul with an Artic Snow Bunti

Nice report. Was it definitely the Monday you did the walk? We saw a Snow Bunting in exactly the same place as you two days before - probably the same one?

Re: Bhuirdh and Avon from Tomintoul with an Artic Snow Bunti

Cheers, yes it was the Monday, I managed to get off the hills just before the deluge, the main street in Tomintoul was flooded when I drove back. I thought the wee snow bunting was totally unafraid of the baggers...could not see it's partner though.