My plans for this weekend were changed on Friday night when I saw the windspeeds predicted for the summit tops. Instead of The Devil's Point, Cairn Toul and Braeriach things were scaled down a bit hoping the wind wouldn't be quite as strong on some of the lower tops.

For years now I've driven past Clachnaben and tried to concentrate on keeping the car on the road whilst looking up at the impressive summit tor so time to finally walk this hill and add on Mount Battock to make it a longer day.

Arriving in the big car park about half a mile north of Bridge of Dye (off the B974 Fettercairn to Banchory road) for 8am I had the place to myself. 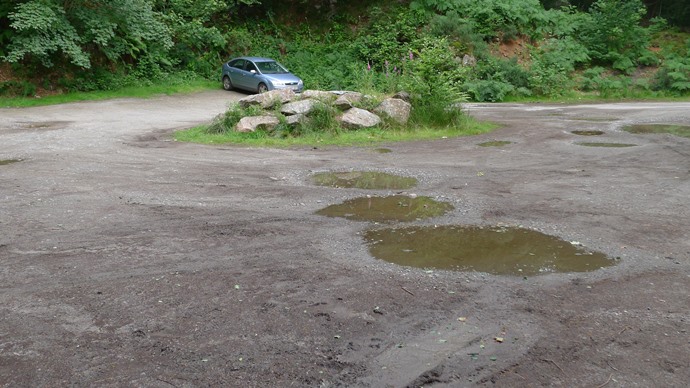 Had a quick read of the information board (I'm very welcome to walk in this estate as long as I stick to the main tracks, I need to watch out for tics and adders).

The walk starts with a gentle climb through the woods before dropping down to a bridge over a burn - at this point taking a right turn to head directly for Clachnaben. By this stage I've past a board with pictures of the wildlife I could see on my walk (including pictures of both male and female adders) and at the bridge there is information on what I should do if I should be unlucky enough to be bitten by an adder - I wonder if all these warning signs put anyone off?? 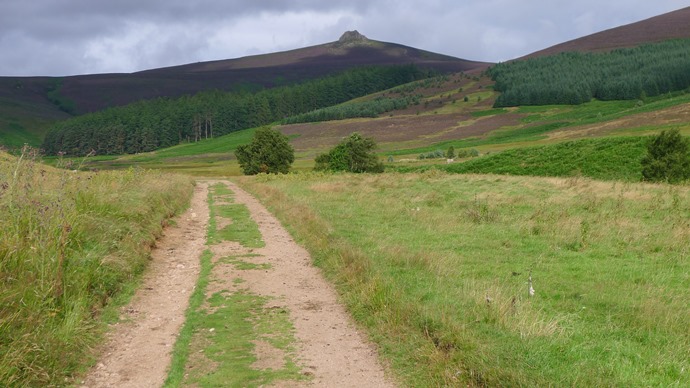 Walking towards Clachnaben with the burn on my right there are a couple of little bridges over small burns before crossing a stile and heading in to the woods. Looking back towards the start of the walk 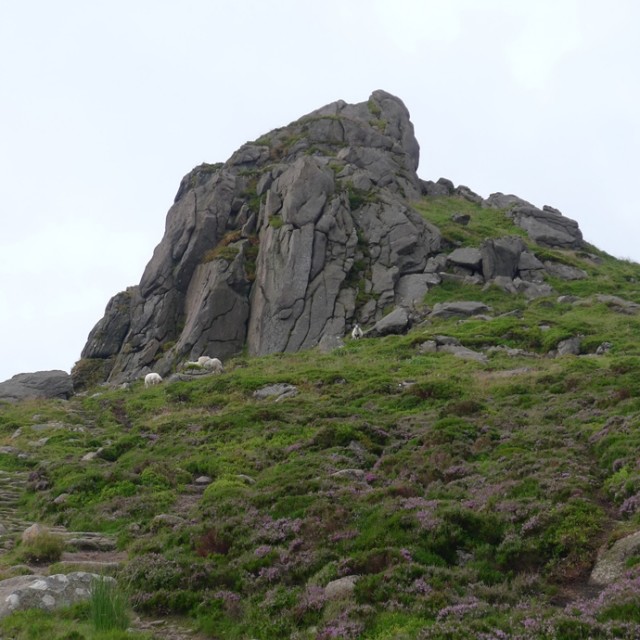 I had been surprised that to this point conditions were fairly calm but as I walked round to the west side of the tor as I was blasted by really strong winds. The climb up the tor was slow going and I had to settle for stopping just off the top as I wasn't convinced I could support myself on the top level. I settled for three or four feet from the top with a big lump off rock at my back to support me every time the wind hit me. No hanging about, a careful drop down off the top and time to head for Mount Battock. 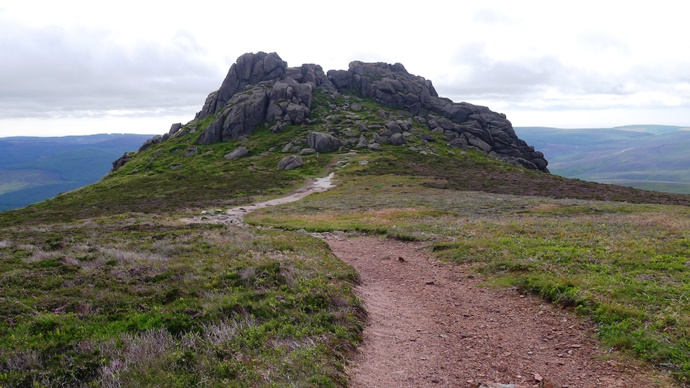 Looking back to the tor 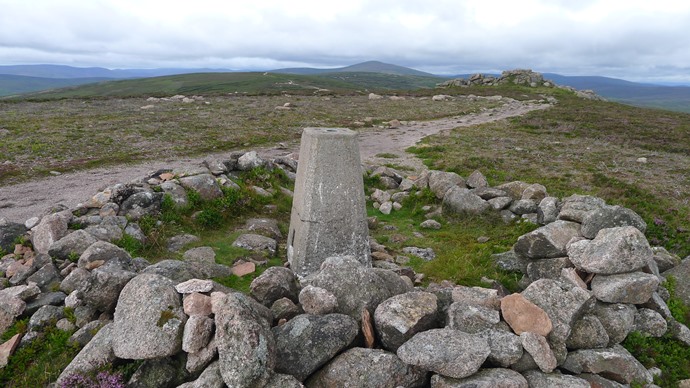 Mount Battock in the distance 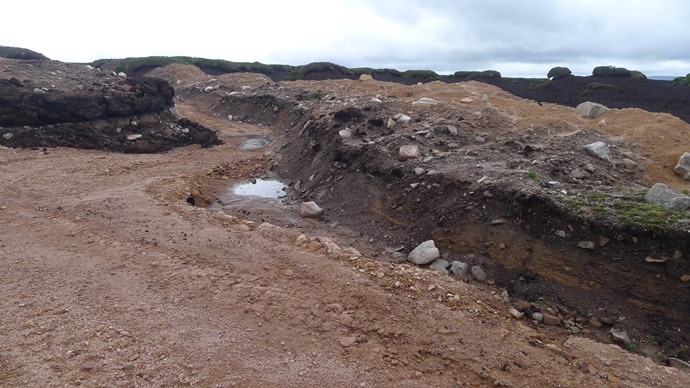 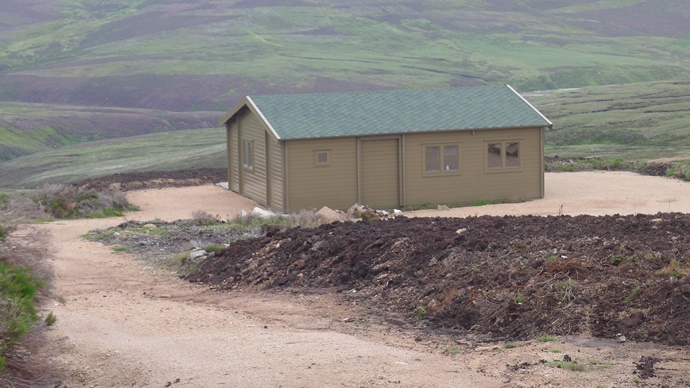 If you go to the hills to shoot the wildlife then it's great news, you can now be driven to within 100 yards of any of the butts on a nice smooth track (in fact you probably have a choice of tracks to choose from), there are loads of parking areas and turning areas for all the 4x4's and it looks like there will be good facilities as well with the various huts that have been erected. There are even a couple of sections of track which have been "dualed" (passing slower moving 4x4's??). And after all that, this sign............ So, having bulldozed the hill to death, turning it into an ugly scar on the landscape, the most important issue is that dog owners keep their dog on a lead to avoid disturbing the wildlife

Anyway, enough of the negative stuff. The wide track which meanders through the peat hags eventually heads on to the lower slopes of Mount Battock and it makes for a quick ascent of the hill. There is an obvious area to leave the wide track (at an area where a large pile of rubble has been dumped and there are a lot of digger tracks

) and it's great to be on a narrow little track for the first time since climbing Clachnaben. It's an easy gradient up on to the summit with the last part following a line of disused fence posts to a windy summit trig point and shelter stones. It was rush hour at the summit, I hadn't seen a sole all morning but there were four of us taking shelter from the wind (I think the other three all came from Glen Esk).

After 10 minutes I was off retracing my steps to within about a mile of Clachnaben where I took the track down to Glen Dye. I could see a small cairn on a little hill just off the track and headed over to a really good view point (Cairn of Finglenny). The track then heads uphill and in the opposite direction from my intended route down Glen Dye but then quickly takes a turn left to follow the Brocky Burn down to the crossroads of tracks at Charr Bothy. Looking down on Charr Bothy At Charr Bothy I stopped for 5 minutes for a sandwich and a drink and for the first time the sun broke through and looked like it might hang around for the rest of the walk.

The track back along Glen Dye is fairly flat and easy going before it gently climbs around the side of Netty Hill and heads towards home. As I get closer to the bridge all I can hear is sheep and as a field comes in to view I realise it's shearing time and there are hundreds of sheep in quite a small field. I now realise thqat the half dozen sheep I saw sheltering behind the tor on Clachnaben were escapees that might just see the winter in with a thicker coat than their pals.

After the field I crossed the bridge which was my turning point for Clachnaben at the beginning so I'm back on a familiar track to the finish. 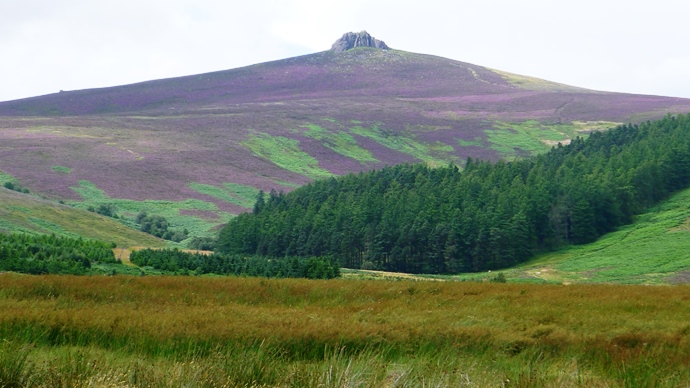 Once back in the woods and it's ten minutes back to the car park (which is now full).

Despite the section between the two hills this was a really good day. I'd definitely come back to Clachnaben again and I'd like to do Mount Battock from Glen Esk as I have a bit of a downer on it at the moment which is probably unfair.

I had thought today would be around the 15 mile mark but it was actually 18.7 miles so quite a long day.