Beinn Challum.gpx Open full screen  NB: Walkhighlands is not responsible for the accuracy of gpx files in users posts
This year I seem to have coped much better with my 50 week exile from the hills. Mind you, I still had all the routes planned before Christmas

, but time just seemed to have gone faster. Which is excellent from a desperate bagger’s point of view!
With equally big ambitions as last year, I had carefully thought out a schedule to ease myself in so I would survive my holiday. Ben Challum was to be first: nothing steep and nothing difficult.
Challum had escaped me last year, when dodgy weather scuppered my plans to visit him from Glen Lochay. But luckily the hill has got a patient disposition.

Today my route went from Kirkton in Strath Fillan. All easy enough: over the bridge, towards the farm, past the ruin of St. Fillan’s Priory and the graveyard with the big trees, over the level crossing. A grassy path strikes off almost immediately after the level crossing, heading uphill but keeping away from the forestry fence. From other reports I had noticed that the route along the fence is boggy. It also looked rather knoley. So that took care of that, the grassy path it was. Route finding was not difficult despite the faint nature of the path. It always went in a logical direction avoiding any steep inclines and most importantly it was dry. The path goes over sheep fences which are easy to cross and through an area of peat bog, but there are stepping stones. I managed to follow it all the way to where it joins the ‘main’ fence at a broken stile. At that point the route is high enough for the bog to have disappeared anyway. Glen Falloch hills before the cloud came down

The weather was very similar to that of my aborted attempt last year: low cloud and a drizzle, but at least it was 11am and not 5pm, so this time I would meet up with Challum for lunch, finally.

The night before my GPS had unfortunately died: it no longer received satellite signals. (First thought was: what a waste of time having painstakingly entered hundreds of waypoints manually…

). With that in mind, map and compass came out and were used frequently. Just before the south top you need to veer off to the left towards a cleft, cross it and then get onto a short narrow ridge. It was too foggy to notice the presence (or absence) of a steep drop on the left, but it was definitely fun walking on the mini ridge.
Challum was a good host, he even offered me a comfy rock to sit on and have my lunch. I enjoyed the eerie silence in the mist. 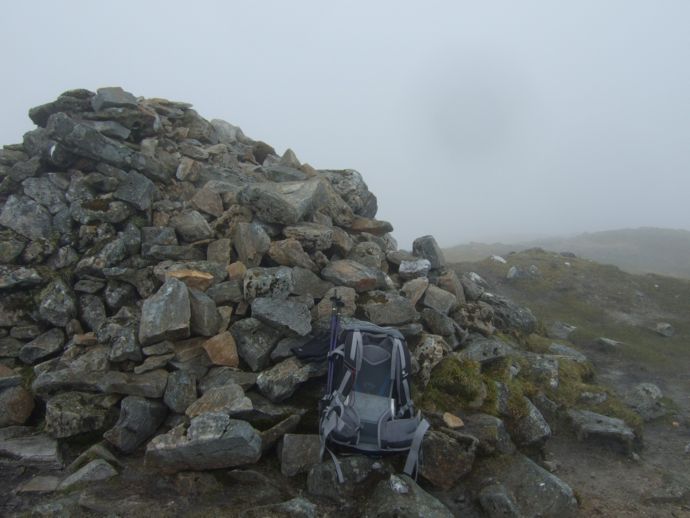 The way back was the same as the way up. Once past the south top, the slopes to the east, west and south all looked the same in the mist. A compass bearing helped and it wasn’t long before I could make out the solitary fence post that marks the way down. Below the cloud I met one other walker and we had a short chat. He had done Ben Lui the previous day and apparently it had been very busy. 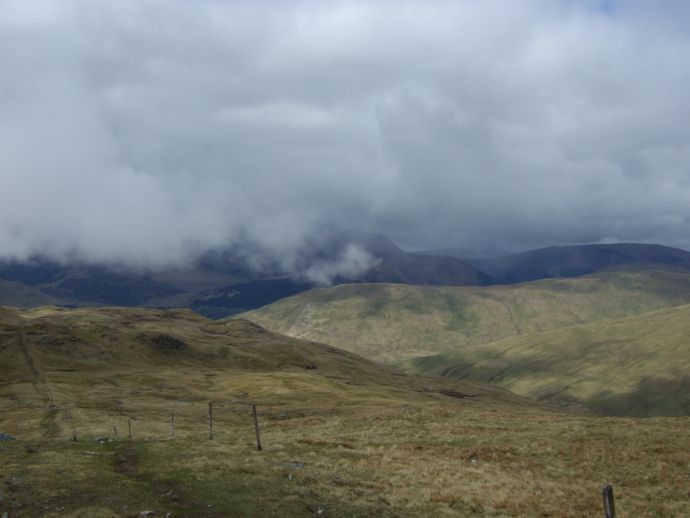 I left the main fence again at the broken stile and followed the grassy path back to the level crossing. It had been a good day despite the lack of views on the summit. Just great to be back in the hills again! You got some good pictures lower down, SH. We've all been to Munro summits with no view. It is time consuming to enter GPS waypoints manually; I sympathise about it going to waste. But it was good to see the old map and compass doing their job.

Thanks Simon! During my holiday I had a few days with very little visibility. Normally I would have got the GPS out to confirm position/ bearings. But with a faulty GPS you've got to rely on map and compass and take note on the way. So it was a really good lesson in navigating. Still haven't replaced the GPS!