On a foggy Sunday afternoon in Aberdeen, Glen Esk was bathed in wall-to-wall sunshine. A perfect afternoon for a short trip out then. We followed the walkhighlands route for most of the way, but altered the finish to avoid the road walk and instead return along the south bank of the River North Esk.


our_route.gpx Open full screen  NB: Walkhighlands is not responsible for the accuracy of gpx files in users posts
The walk began at a very noisy carpark in Tarfside - some sort of shooting event was taking place just outside the village, luckily not in the direction we were headed. We crossed the Water of Tarf, pretty empty today, quickly left the houses behind and were soon in the hills. An excellent track led gently up close to the Burn of Rowan. 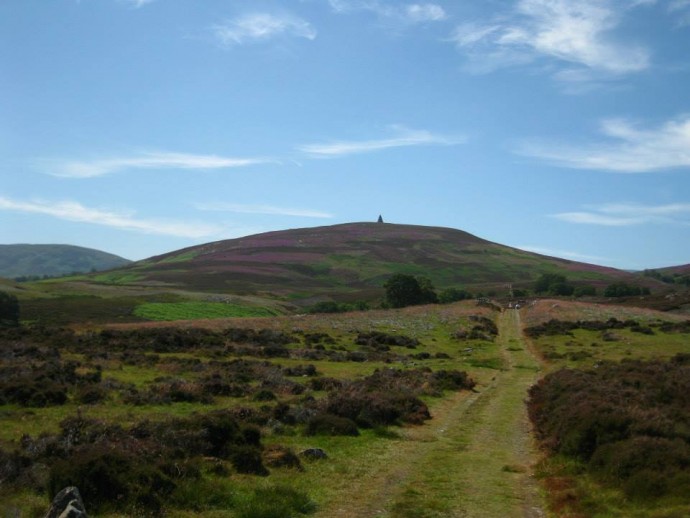 The weather's been just superb in Scotland this summer, and today was no exception. Lots of other groups seemed to be out enjoying the walk too - it was obviously a good day to be out. Soon the route forks right onto a steeper, fainter track. It's only 70m more of ascent though so the massive monument soon came into view. There's a bench on one side which is perfectly positioned to be directly in the afternoon shade - perfect for a warm summer's day. Pretty hard to be lost on this summit

We explored the inside of the beehive chamber, which this afternoon came complete with a whole dead rabbit, which I managed to step on before illuminating it with my phone to see what the soft feeling was - yuk!

The views were a bit hazy from the top, but there was plenty to keep the shutter busy in the immediate background, without any need for the longer-distance shots. A quick check of the compass to confirm the correct descent path, and off down the gentle shoulder of the hill, the monument still clearly marking the summit. 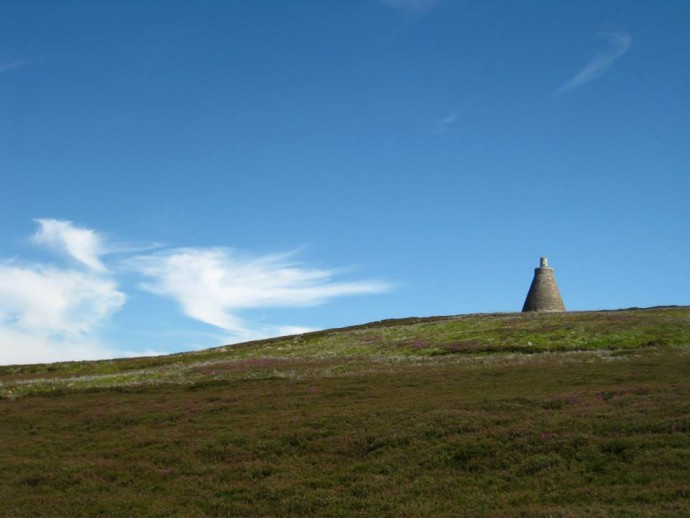 Down at the bottom we headed left on a track, which passed a few useful trees as points of shade, as well as hundreds and hundreds of rabbits, and the usual lapwing suspects. The heather was in full bloom, and it was nice to see grouse butts for once unaccompanied by huge great hill track scars. The track / path becomes fainter in a few places and branches, but it doesn't really matter which fork you take as long as you keep heading in the right general direction - down and round. Finally the track entered the woods just above the valley road. 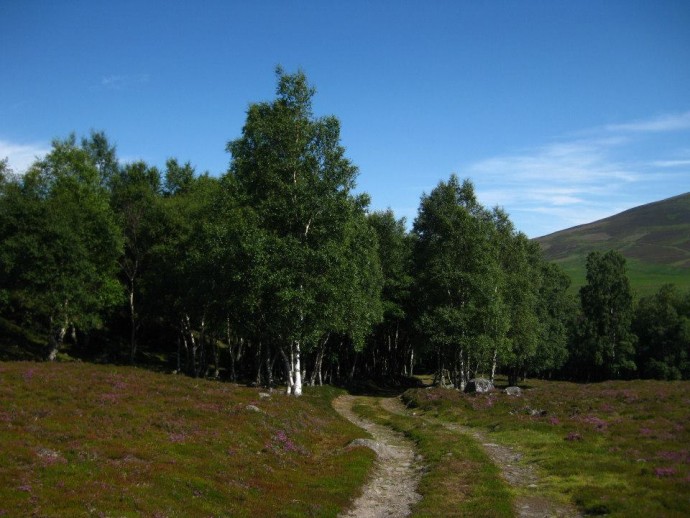 Here, the walkhighlands route suggests following the road about 3km back to Tarfside. It's a minor road and pretty quiet, but we had time for a slightly longer route which avoided most of the tarmac. East on the road for 300m or so, then cross country for a very short distance through light woodland to join an even smaller road heading towards its bridge over the North Esk. Right (SW) along this to the bridge, where a family were enjoying a sumptuous picnic by the side of the river. We also met this wee fella grazing in the forest beside the road, who was quite willing to come and take our offerings of fresh grass. 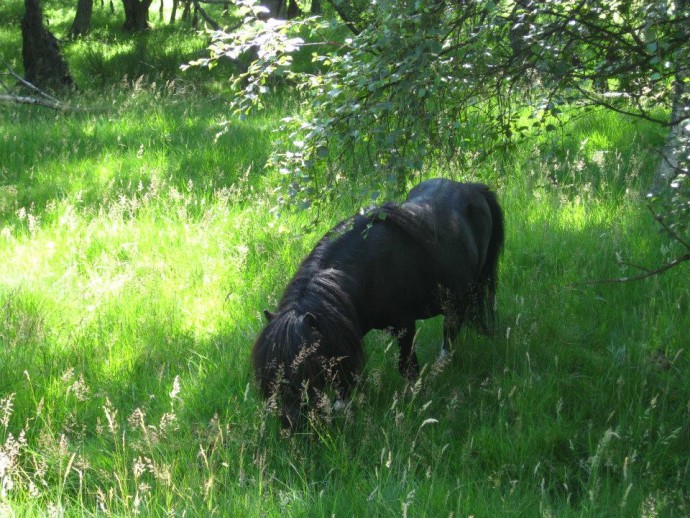 Across the bridge and around to Dalbrack. You'd have to be particularly unlucky to meet a car on this stretch, as the road's a dead end and Dalbrack's just a solitary farm. There were some lovely views through the farmyard across the valley back to the Hill of Rowan. 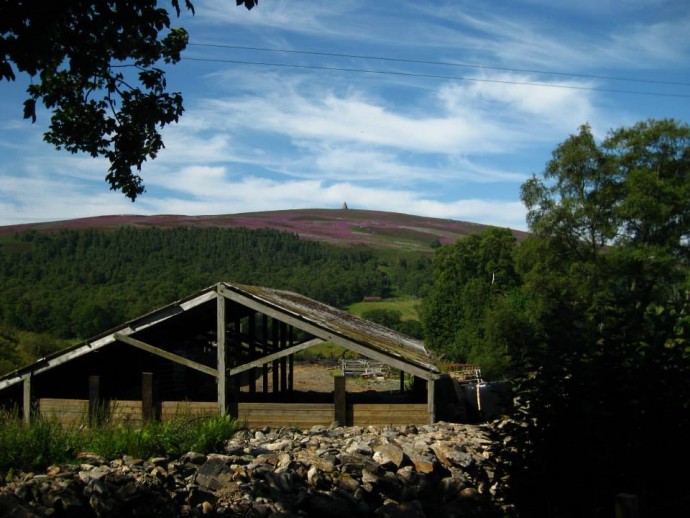 From here, it should have been a simple matter of following a pleasant track all the way past several ruined farmhouses to just after Buskhead - however, at Whigginton I had the inspired idea of following the path marked on the OS map along the river bank from here onwards - obviously this would be perfectly clear and easy going, on this little-used and derelict side of the glen.

Half an hour later we had very itchy legs due to wearing shorts while trampling through long grass, and could definitely confirm that the riverside path doesn't really exist - stick to the track! Still, the going wasn't terrible, and at least the ground was dry. Soon we made it to our crossing point north of Buskhead. It looked a bit dodgy from upstream. 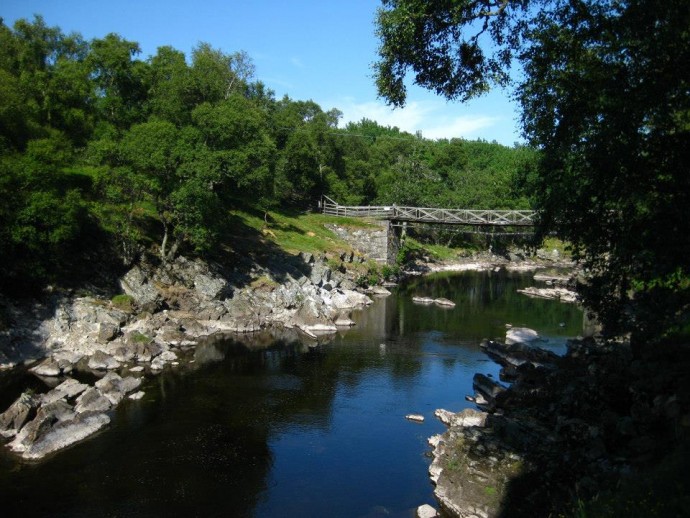 Wishing we hadn't seen it from below, we headed round to the start of the bridge which didn't exactly inspire confidence either. "Do not cross" and "Do so at your own risk" are a bit of a contradiction, but we figured that this amounted to begrudging permission to cross, accompanied by slight danger of death. Being the lighter one, I headed across first - as it turned out, the bridge seemed OK-ish, with the handrails being the worst part (completely rotted through in places). Relieved to make it across, it was a quick walk back to now-quieter Tarfside, where most of the other day-trippers had left the car park although the shooting was still going on.

Overall this was a superb walk, with the abundant wildlife adding to the interest and of course the weather not letting us down either. However I couldn't possibly recommend the return route because of the dodgy bridge... but that's up to you. Do not cross! But do cross, at your own risk

And from the car park, we could see the fog creeping over Craigangower at the foot of the glen. Ten minute's drive and we were back in the midst of a cold, damp, murky day, but basking in the satisfaction of a lovely sunny afternoon out.