I chose to head into this remote wilderness via loch a Bhroain. I had no real game plan other than to get up on the ridge and see what developed. I set off from the layby on A832 at 730 to cycle up to the Lochivraon Bothy. The cycle along the shore side was hard work and with the pea shale it was more like the A9 run out beds in some areas. Depositing the bike at the bothy the path continues up the glen and turns toward Loch an Nid. 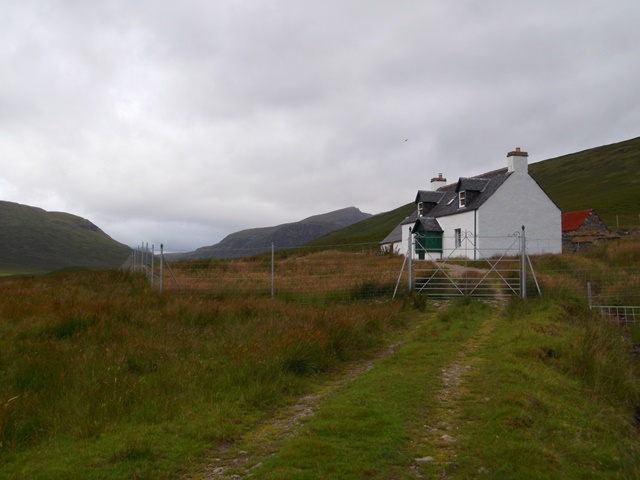 At the Creag Ruigh a Bhraighad I aimed to ford the river and aimed for the right hand side of the slabs. I followed the river upwards keeping to the North side and ascending the stony east flank of Sgurr Ban. The going was good although pathless. The views back down were nice but the low level cloud made for restricted visibility at times. The summit of Sgurr Ban was large, round and covered with stones. The proud cairn was sourced at 1030. Some glances of the neighbouring hills were also enjoyed. I continued south on the main motorway down the broad ridge toward the bealach at head of coire nan clach. As I left the summit top I met another lone worker coming out of the clouds. I wondered if he was nearing completion of the six summits.

The cloud lifted at the bealach and enabled a glimpse of the route ahead. The climb up the north ridge of MCMF was steep with a well eroded path. At the summit the stone cairn was perched on top of the steep west corrie. Time was good at 1110 so I descended the south ridge over the shattered quartzite boulders to the col leading up Meall Garbh. I used the bypass route as the cloud was low over MG and did not look as though it would lift and offer views. The path led to the Bealach Odhar which I contemplated using as a possible exit route back to bothy. I continued up the tapering shoulder to reach the summit cairn at 1210. I soaked up the cloud hazed views and the summit layout as I weighed up what to do next. Get off or get on. Get on.
I continued along the Tarsuinn ridge over the usual landmarks. Not sure if I would fancy camping on the tennis court as it seemed pretty solid underfoot and exposed. After the ridge pinnacles I noticed an eroded path descending NW. I checked and confirmed this to be the route toward the bogfest pass leading across to A’Mhaighdean. I had some lunch and got waterproofed before setting sail over the open ground. I took my boots off (which are the meindhl goretex ones I moaned about before for the premature damage) and placed my wet feet inside two Morrison’s carrier bags to damp proof the inside of the boots. It worked and provided some immediate insulation that lasted the remainder of the day.
There were no distinct paths across the wet ground so it was a get on a direct compass bearing and line of sight. I met four other walkers as I started up the eastern shoulder of AM. We wished for better weather and bid farewell.

From shoulder of A Mhaighdean toward Beinn Tarsuinn with Lochan Fada

The climb up to AM was steady and the views over to Beinn Eighe and Slioch were impressive with loch Fada in the foreground.

View over to Slioch and Beinn Eighe and company

From AM East ridge back across to three munros just climbed SB,McmF, BT

As I approached the summit the clouds lifted and it was possible to see more of this remote Letterewe wilderness.

I reached the summit cairn at 1425. The views from this location were amid the best that I have ever had the privilege to experience. This summit alone was worth the entire effort of the day. The views down the causeway with the sharp cliffs of Beinn Lair, Dubh Loch, Fionn Loch over to Poolewe and Aultbea, back across the traverse route, over to RSM with An Teallach and company dominating the landscape. I took some time to soak up this unforgettable scenery.

From summit of AM North AM summit looking West down to Loch Dubh and the causeway North cliffs of AM I reluctantly headed of NE down to the col beneath RSM at around 750m. The rock formations were unique, I had previously read about a cave that could be used as a bivvy shelter but could not source it. A short sharp climb up the well-worn scree and boulders took me up to the summit trig point and cairn at 1530. The views were equally stunning. These two remote munros are well worth visiting and it is easy to appreciate why they are highly prized by climbers. Alas, one of the views was across Glean na Muice to Loch a Bhrisidh and the outfall flowing downhill and ominously the next goal. It seemed a long way to go to get back on track to get home. No point in moaning, my choice, time to get on. I tip toed down the steep red stone covered slope toward the lochan a Bhraghad. I then headed east contouring around the 705 top before descending steep wet grassy slopes to reach the fast flowing Abhainn Gleann na Muice. I forded at the outflow from the west at a small tree with no braches or foliage.
I started the leg burning climb up toward Am Briseadh at 650m. This was physically demanding to say the least and the lack of wind and humid atmosphere provided fine feeding conditions for the wee native biting female minge. I was sweating heavily and must have lost a stone in body fluid but put it back on with the weight of the midge cloak.
At last I reached loch Bhrisidh to find a welcome small breeze. I made my way along the north shore and climbed up to 650m. Another dilemma for the wanabee purist ensued. Should I head back down to the bothy and home or summon the energy to carry on in the opposite direction to summit Beinn a Chlaidheimh at 916m, it was a munro and is still part of the Fisherfield six. 256m of ascent and 2km distance one way.

I ate a slice of caramel shortcake with vermicelli on top (midges) and decided to get on with it. So the large summit of BaC was reached at 1848 and the set was complete.

The white stone cairn was definitely more than a metre in height so would that not count toward munro status? The summit offered great views across to the impressive Beinn Dearg Mor at 910m. Near summit of BC across to Beinn Dearg Mor

I descended to the bealach to collect the rucksack before heading out on the long return leg. I took a direct bearing for loch an Nid. The going was good and the slopes were not too punishing. I crossed the Abhainn Loch an Nid just beneath the waterfall at the head of the loch. I joined the stalkers path and followed it back to the bothy. The return cycle trip was made in the twilight. The ride along the loch side was eerie with the low cloud inversion, diminishing light and the sounds of the water. I spent more time off the bike this time and eventually got back to the car at 10pm safe and sound.
This was an epic day in a truly remote environment which will rank as one of the best yet. This entire figure of eight route would not be for the feint hearted or unfit but it does provide alternative possibilities for anyone contemplating a trip to this area.

Excellent report & photo's, enjoyed reading it, does sound like a bit of a marathon

Enjoyed reading that one, really whetted the appetite, though I suspect I would have to do it over 2 days.
What were the river crossings like?

well done getting those 6 in a day

That is impressive, well done!

An epic journey, Kenny, and I'm so glad you got the views from AM and RSM. They must be among the best panoramas in Britain.

Fife Flyer wrote:Excellent report & photo's, enjoyed reading it, does sound like a bit of a marathon

weaselmaster wrote:Enjoyed reading that one, really whetted the appetite, though I suspect I would have to do it over 2 days.
What were the river crossings like?

Thanks WM, the three main river crossings were fine. No need to get gear off and no need for lifejackets

Thanks SA, we are lucky that we are so close here on the black isle so the reduced travel time helps.

LOL, Cheers andyroog, you can not beat improvisation.

Thanks Silverhill, me too as the views from the west side were astounding.

simon-b wrote:An epic journey, Kenny, and I'm so glad you got the views from AM and RSM. They must be among the best panoramas in Britain.

Cheers Simon, you are spot on and

are well worth the visit.