Baosbheinn and Beinn an Eoin a fine day out.

Baosbheinn and Beinn an Eoin a fine day out. At last the Sgorr Dubh of Baosbheinn.

A day out from the past on these fine hills. In the days before we had the digital image making machine so these poor-ish views were scanned from the diapositives however they are the only record that we have of this day.
The walk was started at the wee hut beside Am Feur Loch. We cut onto the start of the long ridge leading to Eoin prior to reaching Loch na h-Oidhche. From the summit area of Beinn an Eoin.

Eoin and is Baosbheinn, and as we were later to find out when on Beinn a' Chearcaill, are fine viewing platforms for many of the bigger Torridon hills. A fairly direct line was taken down to reach Poca Buidhe bothy which I've heard has some sort of ghost reputation....we were just passing through. 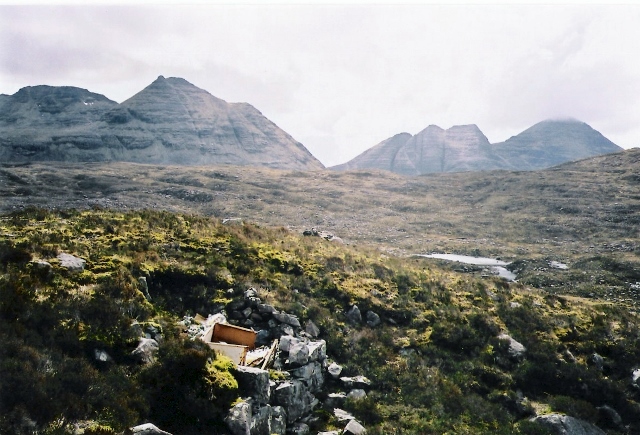 The bothy rubbish pit with Beinn Dearg and Alligin 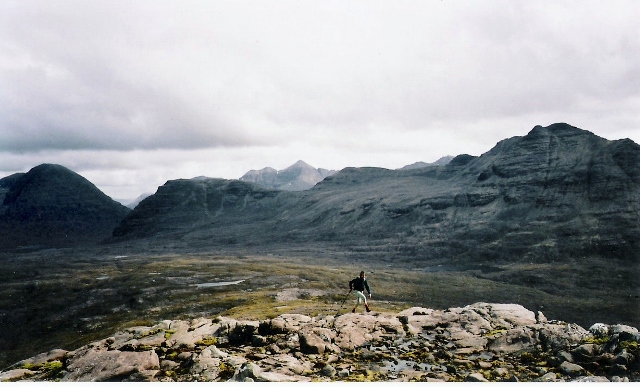 Out towards Cean Beag a subsidiary top of Baosbheinn. On the way to the main top with Alligin behind. Beinn Eighe in the distance with a bit of Cean Beag and Beinn an Eoin.

At last the Sgorr Dubh of Baosbheinn.

From here down to a big saddle, descend NE, and then out across the moor to rejoin the path leading back to the A832 road.

Clearing out the archives??

Great stuff. It is actually nice to see some olde worlde scanned images or maybe I just think that because I swapped to a digital camera quite late on in history (2007). Scanning the new sepia...

I was invited to stay in Poca Buidhe as an unofficial guest in 1993 and went to Ben Dearg from there and also did part of Baoshbhein. No ghosts to report. Had a demanding winter day on Ben an Eoin in 1999 or 2000 complete with blizzards. Got back to the car and promptly fell over from exhaustion. How feeble! And I was a mere thirty something then.

kind-of regaining some of the images in the archives.

About a year ago the PC was blown apart by a lightning strike which left the 'tower thing' totally busted.

I recently located a CD with some of the Corbetts therein.....don't worry not too much else that would make up even a bit of a day's journey.

To the gentleman with great knowledge of the Lofoten (sp?) islands who seems to have made several trips into the 'sanctuary'.

I must say that I have only been once in here although recently we came close to it on the South side of Eoin. For me, the digital image making came during part of 2006 when I borrowed a camera for a bit, and then into 2007 I got a small one and have had this since then.