Time to submit another (somewhat tardy) TR for a walk that already has its fair share of accounts, so I won’t prattle as much as I often do.

Another weekend of fair weather and, perhaps even more amazingly, another weekend where Becca not only did not have to be coerced or bribed into joining me for a hillwalk, but actually suggested it. After briefly questioning whether I’d stumbled into some alternate universe, I quickly accepted and set about identifying a target. The weather looked finest around central Perthshire which suited me down to the ground – I didn’t want to have to drive too far and still had many hills to explore in the area.

I’ve been saving the popular Lawers range for the other side of summer, when the weather is a little cooler and crowds less...crowdy. Having been suitably enchanted with Glen Lyon on the drive to Stuchd An Lochain a few weeks back, I was keen to return and share some its splendour with Becca, though not quite keen enough to drive its length to claim Meall Buidhe – that left us with the intriguing horseshoe near Invervar. A quick check of the route revealed little in the way of difficulty besides the obvious physical impact of climbing 4 munros in the kind of heat we’d recently had, but that wasn’t enough to dampen our enthusiasm and a decision was swiftly made.

We arrived at Invervar at around 08:30 and nabbed the second to last space in the tiny car park. After a slight false start (I managed to walk for 5 minutes before running back to the car to check I’d turned my lights off), the three of us (Maggie the mad Jack Russell was in tow, looking to add to her munro tally) set off briskly. The first part of the route is closed owing to the crumbling building which the path skirts, however a diversion some 50m up the road was helpfully signposted and hard to miss, if a little overgrown. We rejoined the main path at the high stile over the deer fence before venturing into the atmospheric forest. Once in the trees, the path climbs steadily alongside the Invervar burn and a turn off from the main path to an attractively rocky section of waterfall with a deep clear pool was noted for feet cooling opportunities on the return leg.

We emerged from the trees and followed the track uphill as it clung to the edge of the forestry, somewhat nonplussed by the low, claggy fog that made this early part of the walk wonderfully atmospheric, but threatened to rob us of any views once we reached the ridge. A part of me hoped desperately that the cloud was lower than it looked and that I’d be treated to my first ever inversion... After crossing the hilariously shoogly bridge, we plodded up the now smaller (better) track which headed out onto the open moorland flanks of Carn Gorm, the fog now wrapped around us like a misty blanket. This did give its own curious beauty to what might have otherwise been a bit of a dreary slog up the non-descript slopes – the lack of visibility and the slick covering of morning dew left by the fog created a pleasantly otherworldly feel as we plodded inexorably upwards, with Maggie snarfling her way through the heather beside us.

At round 950m, the revelation happened – pastel blues began to seep through encompassing clag and the intense warmth of the sun began to be felt once more, while the giant shapes of the mighty range to the south of us began to materialise. The sudden realisation that we were both very close the summit but, more importantly, minutes away from seeing our first inversion, spurred us on with renewed vigour until we broke free from the clouds altogether and soaked in the wonderful panoramas under blue skies which began to sweep away in all directions – what a sight! Though most impressive was the towering bulk of the Lawers range, the views across to the Crianlarich hills and beyond to Glencoe were equally impressive, though still I found myself gazing back down to the glen encircled by todays targets and the rolling sea of cloud that appeared trapped within. For me, perhaps under the persuasive influence of witnessing my first inversion, the knobbly summit of Carn Gorm was the most enjoyable of all the days munros. Though the other three munros were enjoyable in their own way, Carn Gorm seemed to command better views across to the west and up Glen Lyon, while the aspect achieved from the others seemed less inspiring – this was my first walk that would encounter shapeless, bulky munros that don’t feel at all impressive and I can see fully why some walkers would leave the likes of Meall Garbh and Creag Mhor for when winter’s natural endowments provide the excitement that these munros lack. The exception is of course Carn Mairg with its curious cluster of crags and the fine views it commands over to a certain fairy hill of the Caledonians. A note to other walkers who are yet to do this route – I think we may have mistepped by not retracing east far enough before descending Carn Mairg – our way down (though clearly following a path) was extremely steep and a little loose! Back to Carn Gorm 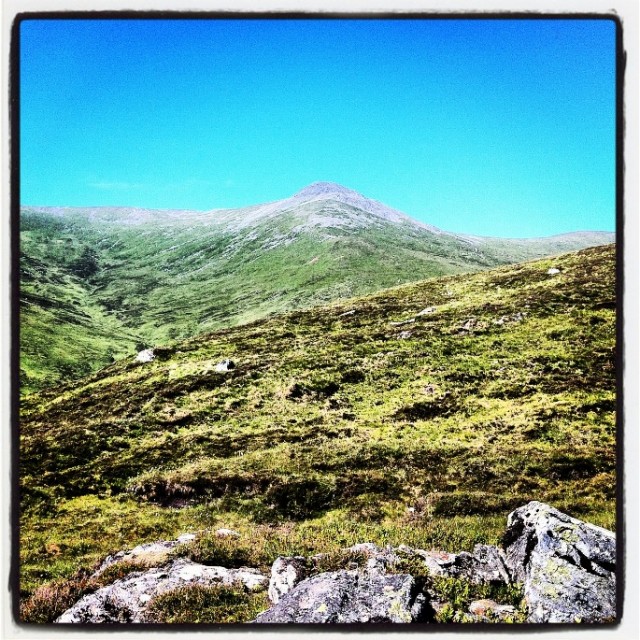 Back up to Cairn Mairg Apart from the wonderful inversions atop Carn Gorm, I did also particularly enjoy the descent from Creag Mhor down its long eastern ridge, which we did in warm sunshine - it rewarded with fine views back up to Carn Mairg, across to a better aspect of Carn Gorm, and into Glen Lyon. This walk certainly did have its highlights, but perhaps it was unfortunate that most of them occurred within the first quarter of the day! But another 4 munros apiece for me, Becca and Maggie who left a little tired, but very happy – the only difficulty as ever is deciding where to head next.

Excellently well written. Was here in 1990 or so but in cloud so nice to see something of the tops. Great conditions for your walk -well the inversion and other fog effects at least.

After briefly questioning whether I’d stumbled into some alternate universe,

Great start Stevie and it just got better after this, really enjoyable report. The inversion is another 'first' ticked off and an excellent one it was too. Love the epic Maggie pics

Excellent report Stevie, of these much frequented hills! Like you I found myself on slopes that became increasingly steeper and rockier off Carn Mairg. Not sure why I got myself there as visibility was excellent

Nice to see the heather is out, love those colours.