Listening to the Sound of Silence on Auchnafree Hill

Listening to the Sound of Silence on Auchnafree Hill

I had a couple of options lined up for today, one of which was Auchnafree Hill. This Corbett had been on my radar for some time and although it probably wasn't my first choice for today, we were dog-sitting for a friend of my wife's who was moving house and so Rosie the Boxer was coming along to accompany my usual four-legged walking comapnion Lucy. Rosie can be a bit temperemental (or should that just be mental?

) when out and about and isn't too good in the company of complete strangers ..... or sheep! A couple of the other hills I had considered looked like they might be prime sheep country and so I decided to head for Auchnafree Hill from the Loch Turret Dam. The two times I'd been up here before I seem to recall the odd sheep kicking about but not too many, and on a Friday in February I didn't think there would be too many other humans around.

We were away from the house by 9.10am with the temperature in the car displaying 0.0 degrees. By 10 we were pulling into the empty parking area just below the dam wall with the reading now at 3.5 degrees. There wasn't another soul to be seen so both the dogs got the freedom of the place and we headed up towards the track on the east side of the loch. 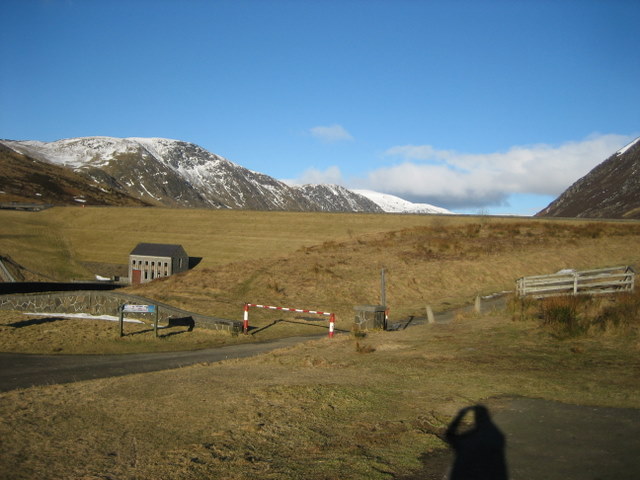 Carn Chois and Creag nan Uan over the dam wall, Ben Chonzie in the distance 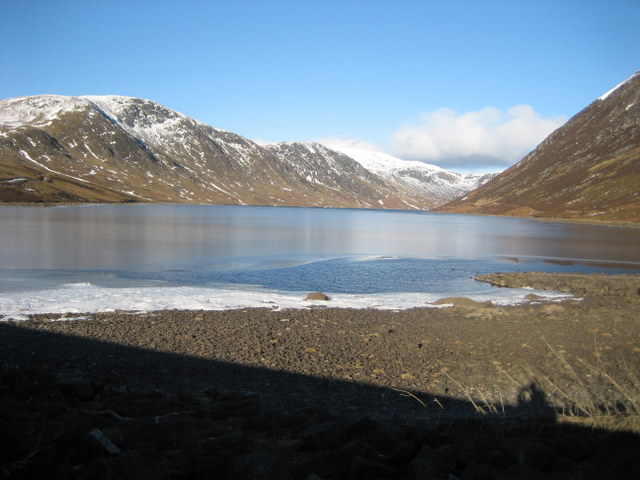 Looking northwest down the loch from the dam wall

I had forgotten from previous visits up here that the gate in the fence to the right of the dam is padlocked and the only way over is using a 3 step metal ladder on either side. Lucy scooted over without as much as a second thought but Rosie just stood and stared at it, whimpers quickly turning to yelps when we were on the other side and she was left stranded. Despite my efforts at encouragement, there was nothing else for it but to get the pack off, climb back over, pick her up and heave her over. Just at this point, another walker was approaching from the carpark and so to compound Rosie's misfortune, she now found herself shackled. The other guy and I exchanged a few words and then I let him head off down the loch-side track while I waited behind for a few minutes to give him a good head start out of Rosie's way. I didn't see too much of him again, other that the odd glimpse of him away in the distance, as I was being slowed down considerably due to constantly having to stop to put one or both dogs on the lead as we approached a group of sheep. Despite this, I was thoroughly enjoying the walk. It was nice to be out alone with two dogs, in complete solitude, with the surprisingly strong sun beating down on us. It wasn't long until I was shedding my hat and gloves and donning my sunglasses. 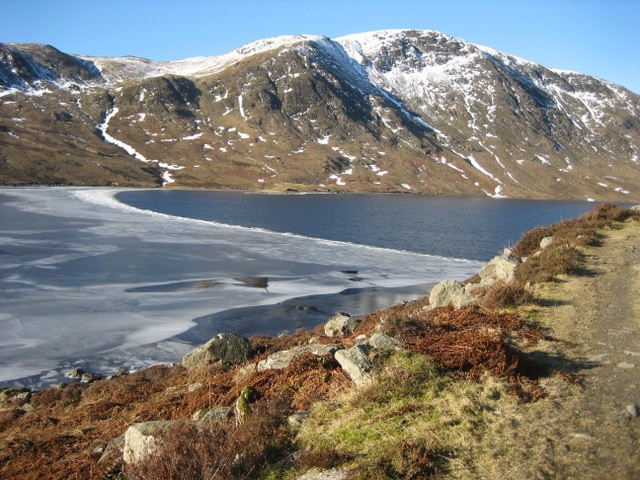 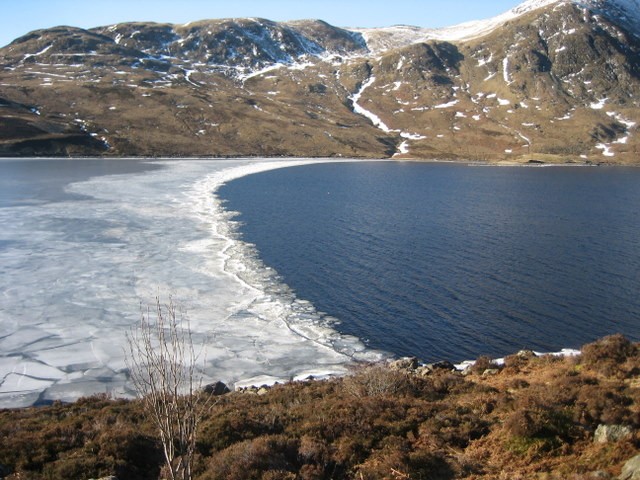 The ice comes to an abrupt end 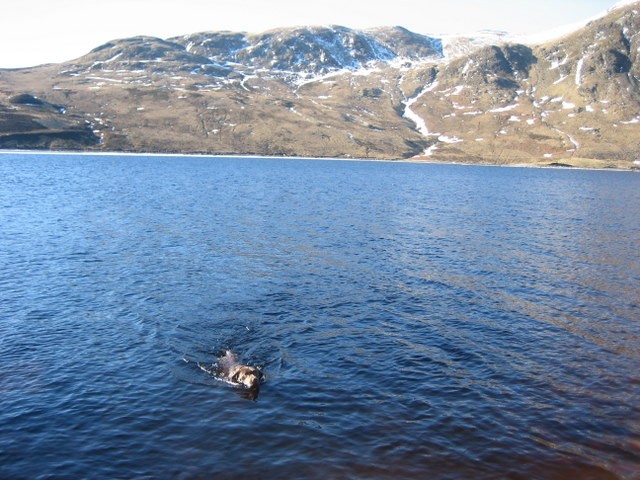 Lucy goes for a dip 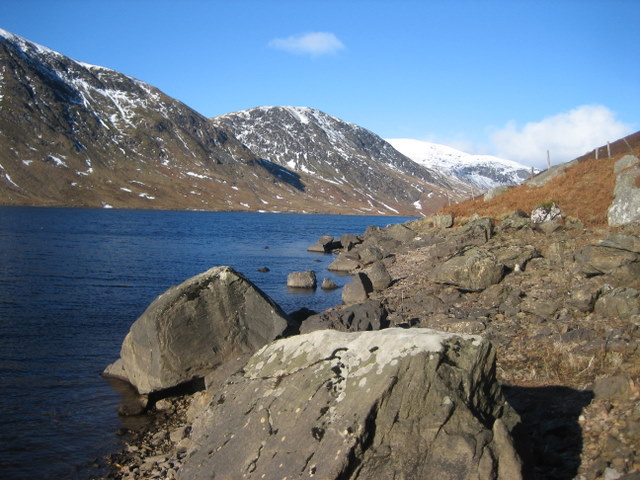 Down Loch Turret towards Ben Chonzie

The track pretty much hugs the eastern shore of Loch Turret but as I rounded the crags on the right, it began to cut inland ever so slightly and at the same time began to climb quite steeply. The prominent shape of Ton Eich comes into view on the right and at the same time, so does the head of the loch and the hills encircling it. In the distance I can clearly make out the "Gully of Doom" just to the north of the crags above the west side of Lochan Uaine, and my mind wanders back to the day nearly two years ago when myself and a group of friends climbed this gully in a raging blizzard on our way to the summt of Ben Chonzie on an Expedition Leader training session. 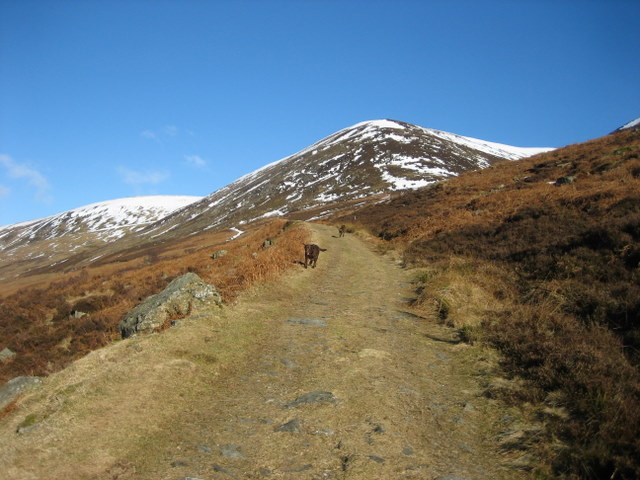 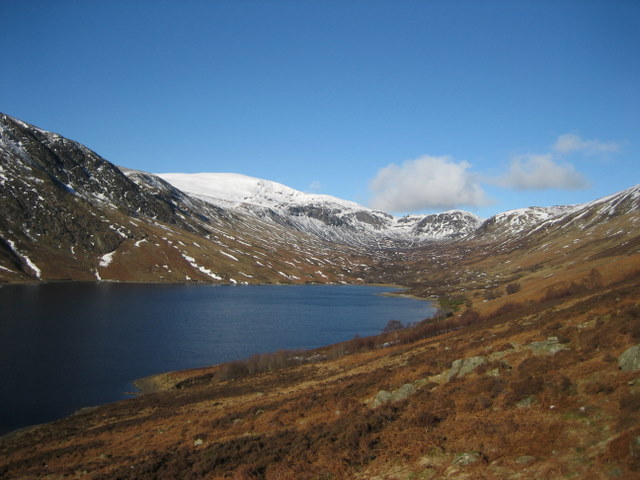 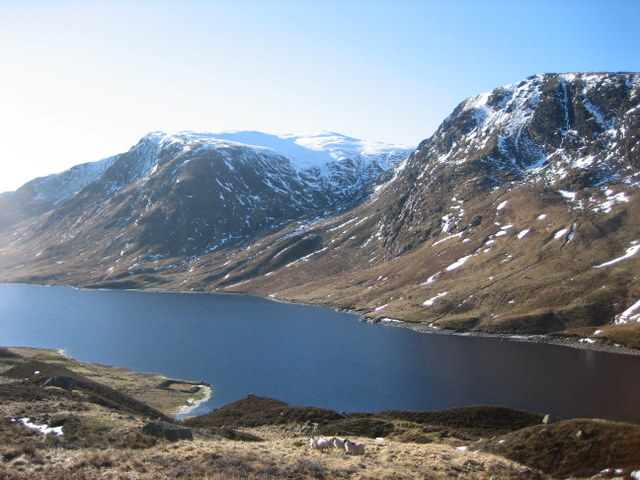 Carn Chois across the loch

The floor of Glen Turret beyond the end of the loch is adorned with little hummocks, no doubt the result of glacial action during the last ice age. At the junction in the track at 796301 I keep left, heading towards Lochan Uaine. The idea is to avoid taking a direct line for the summit via the ridiculously steep track which climbs up the southwestern flanks of Auchnafree Hill and instead to ascend through the crags on the southwestern slopes of A' Chairidh above Lochan Uaine.

As I leave the track (which continues beyond where the OS map suggests it runs out) and begin climbing A' Chairidh, I have to peel my upper layers right back and resort to rolling my sleeves up. Both dogs are doing a power of panting as they labour up the slope, although at least Lucy looks like she is in familiar territory and does not have the look of utter bewilderment on her face that Rosie does!

At the lip of the crags where the slope eases off to a gentle rising plateau towards the summit of A' Chairidh, I find a nice rocky ledge and stop for lunch. There are magnificent views back down the length of Loch Turret, across Lochan Uaine and over the crags to the summit plateau of Ben Chonzie, and to the east to the summit of Auchnafree Hill, with it's large cairn visible on the horizon against the blue sky. 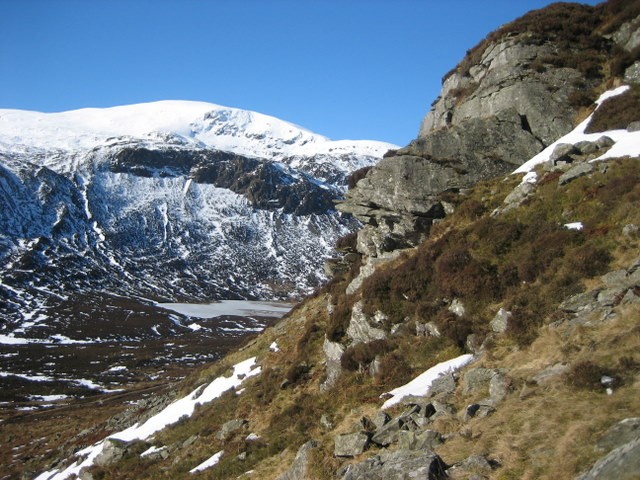 Lochan Uaine below the eastern crags of Ben Chonzie 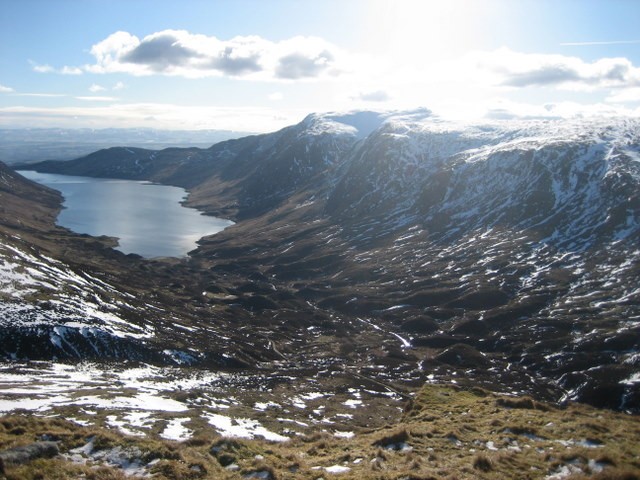 Down the length of Loch Turret, hummocks in foreground

As I set up for lunch, Lucy does her usual thing of wandering off a short distance (no doubt picking up the scent of the scabby carcass of some poor dead moutain dwelling animal) while Rosie flakes out in the sun. I sit for about 50 minutes enjoying the views and enjoying a leisurely lunch before packing up and picking out a line of attack towards the Corbett summit. It's amazing how a roll and sausage can refocus canine attention!

Before heading off I put the crampons on and am soon glad that I did as the snow up here is pretty solid and polshed in places and it makes the going altogether more comfortable. I soon pick up a line of old fence posts which are closely followed by some unusual tracks in the snow and as we gain height, the views behind us to the north west open up towards the Lawers range. Lawers range in distance, strange tracks in the snow

Eventually the two cairns on top of Auchnafree Hill come into view. I head firstly for the smaller more easterly of the two cairns, as this seems to be marginally higher than the much larger, more solid cairn a short distance west. We head over to the larger cairn and after a few photos, I set the pack down and sit down for another cup of hot juice and a some chocolate, while Lucy flattens down an area tight against the cairn and curls up and goes to sleep. Rosie on the other hand continues to sit bolt upright sniffing the air and staring at the horizon in continued bemusement. I end up sitting there for 20 minutes and then it takes a monumental effort to haul myself up and get moving again. The silence is absolute - there are very few summits where I have felt such a total sense of tranquility and peace. Neither of the dogs are making the slightest sound, and apart from the very faintest of breezes and the short lived buzzing sound of a small plane somewhere over Strathearn, nothing can be heard. I could quite easily have fallen asleep there myself. The two summit cairns, Ben Vorlich and Stuc a Chroin in distance The Lomonds away in the distance

From the summit we head SSE to pick up the track which loops and snakes around the back of Ton Eich and on towards Choinneachain Hill. Meall na Seide across the gulf At the cairn at 815286 I leave the path and continue due south towards the southern end of the crags above the loch. The crags seem to signal the end of the snow line so off come the crampons. From here it's pretty tough going down very steep slopes through some pretty fierce heather to pick up the lochside track about 1km from the dam wall. Above the crags at the end of the snow line

The guy who had set off just ahead of me this morning is crossing the dam from the Chonzie side just as I approach and we compare notes in the carpark. It sounded like he had enjoyed a cracking day up on Ben Chonzie where he had not seen another soul all day either.

I thoroughly enjoyed this walk today. Everything came together to make it one of the best hill days I have enjoyed for a long time - the weather, the underfoot conditions, the tranquility and the canine company.

Re: Listening to the Sound of Silence on Auchnafree Hill

I am glad Lucy forgave you after the last trip out.
Looks like a nice wee hill, must get that done soon.

Cracking views and it is not often you do get that silence on a hill. Isn't it bliss?

Re: Listening to the Sound of Silence on Auchnafree Hill

Thanks for the reminder of Auchnafree Hill.....when I first went to this area in the late '50's I don't think that there was a dam and reservoir around then!...from what I can recall some buildings must be under the water now! Looked a fine day to be out down there...after the break that I had on Friday I had a less than satisfactory day in thickish clag, on the plateau, on Saturday....didn't even go out very far on the Sunday.