My friend Arash is from Iran and hadn't climbed any Scottish hills. He drives articulated lorries so knows the lie of the land from road level but was keen to get off the beaten track. After a planned climb in Kintail was diverted by low cloud in the west to Ben Rinnes in the east he pronounced he wanted to climb some 'big boys' so we decided on Conival and Ben More Assynt.

I went for Rob and Mary first at 7.15 and picked up Arash 10 minutes later at the layby where he stashed his bike just before the Kessock Bridge. We had a pleasant drive up via Ullapool and parked in the car park by the Inchnadamph Hotel, crossed the river and turned right up the private road which passes the hostel. We crossed the Allt Poll an Droighinn on a concrete bridge and were soon at the pretty white holiday cottage of Glenbain which looked a fine place to stay. After passing a plantation on the left the path forks, with the right fork leading to the Traligill caves and the left one heading for the hills. The path keeps to the north side of Gleann Dubh which becomes narrower and steeper-sided as you go.

Arash works nights and had been driving all night with just an hour and a half of sleep, which is probably not the best preparation for climbing your first Munro. But when we stopped for a breather he tucked into his breakfast in good spirits! Conival with a little wispy cloud on top Looking back the way we came Out of the breeze it was so warm there was a strong temptation to take a dip in the pools below the waterfalls but the clegs were out in force and looking for business so we weren't inclined to expose too much flesh - although they have been known to suck blood through fabric which is not a cheering thought! The path climbs steeply keeping to the left side of the Allt a' Choinne Mhill, reaching a hanging valley with a rocky band at its head. As we approached the rocky band we expected a short scramble but the path wended its way up without the need for deploying hands. So for fun I went off the path to get a bit of hands on which is oddly satisfying in a looking-for-a-bit-of-variety kind of way. Once up this step you're on the bealach between Conival and Beinn an Fhurain and get your first long views of the day looking down the far side into Coire a'Mhadaidh with its lochan and the quartzite buttresses of Na Tuadhan. But the haze looking north meant the photos at this point are not as clear as the ones I got on the way back. From the bealach the path turns south up the quartzite scree slopes to where the ridge becomes more defined and grassy as it nears the summit. The east ridge which connects Conival to Ben More Assynt 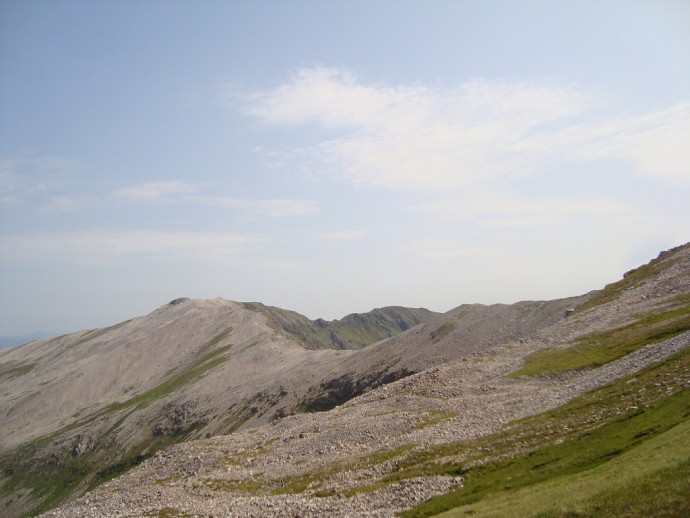 His first Munro and loving it! 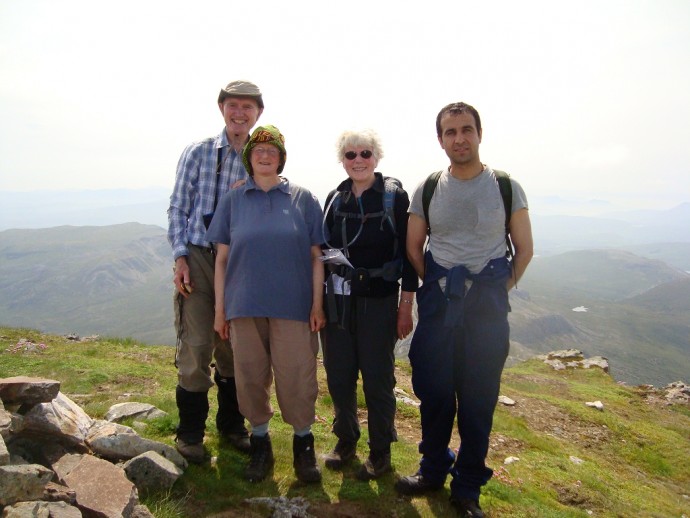 Looking south and the River Oykel 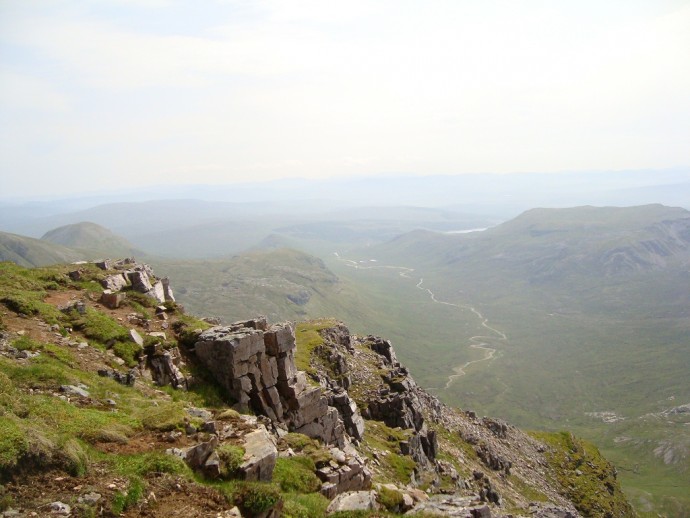 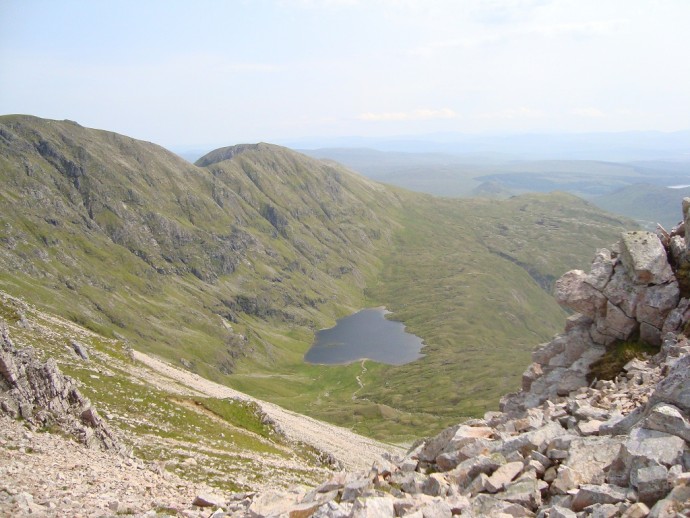 Ridge of boulders and scree leading to Ben More Assynt Speedy Arash is the speck on the sky line 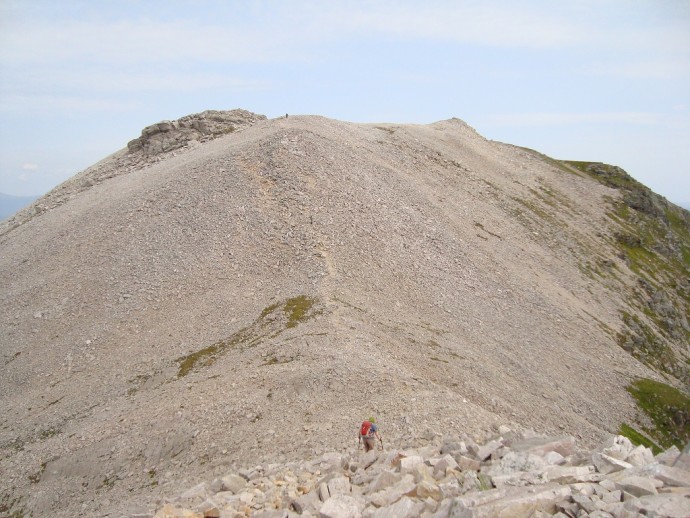 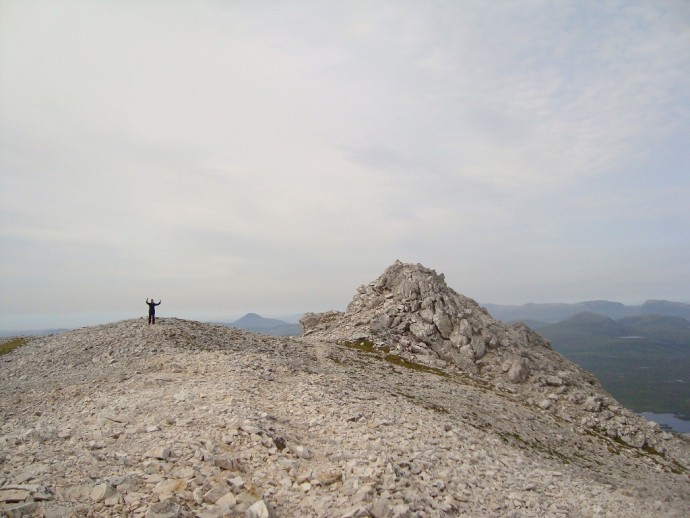 View from top into Coire a'Mhadaidh 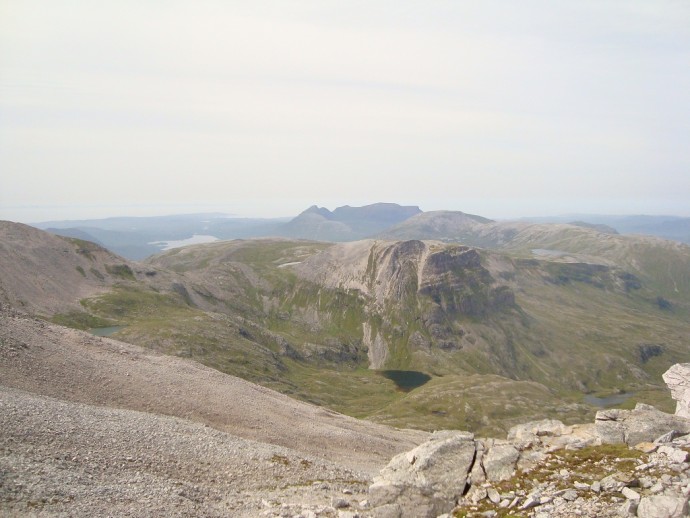 There are two rocky points on BMA's summit and we visited them both just to be sure. We wondered if there was a way down that bypasses Conival but reckoned the quartzite scree would make for an awkward descent so returned by reclimbing Conival - meaning Arash has done his first Munro twice on the same day!

Zoomed to hills of Inverpolly 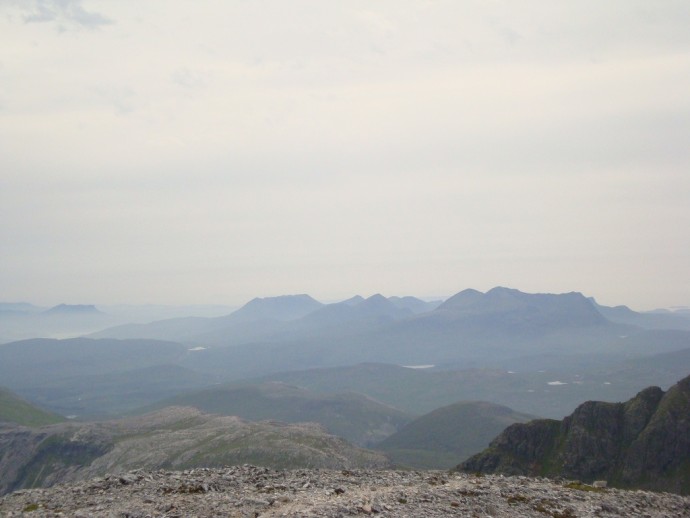 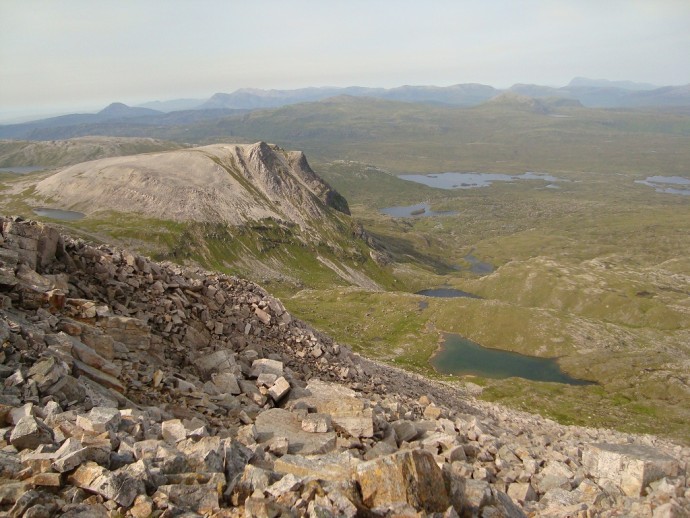 View west to Loch Assynt, Quinag and the Isle of Lewis 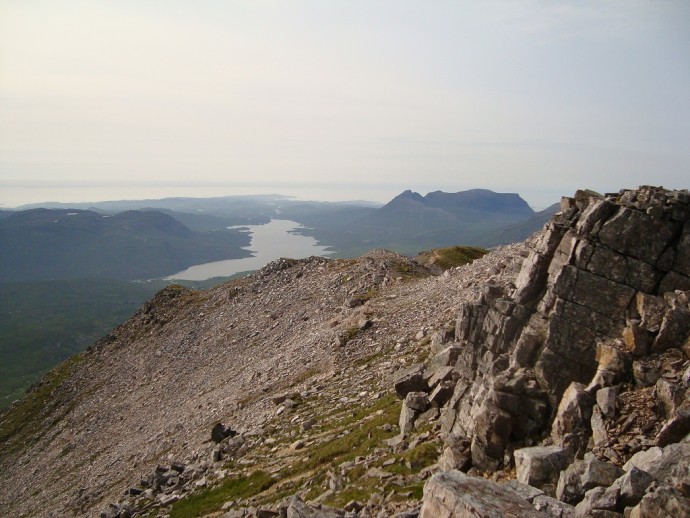 Going down the rocky band I stood to one side to let a young man overtake but he was in no desperate hurry so we got talking and discovered he used to work with someone I know. He walked at my geriatric pace for a while until he realised at that rate he was in danger of missing dinner in his B & B so sped off. I've been a few weeks in posting this Dr H but it was lovely to meet you and I hope the good folks of Saltcoats stay in good health!

Looking back at Conival in the late afternoon sun Arash was a natural on the hill and enjoyed his first Munros but on the walk out his sleepless night began to tell and as we neared the car he said he would never do this again! But it was nothing a long cold drink wouldn't sort and by the time we were licking ice cream in Ullapool he had his old spark back again.

Nice report there Dogplodder - thanks for the fotos.... I`m off up north to do the " top four " next week - hopefully not in the rain .

Nice report, Dogplodder, sounds like you've a bit of the old spark back there yourself.

Interesting account of these two as heading up there next week also...following a similar, if not the same, route. Early indications suggest the weather may be somewhat different.

Like Arash's boiler suit...could be the start of a new trend.

I remember doing this duo on a hot sunny day, the arete between them is so rocky, my feet were hurting for a few days afterwards

Did you get a peek into Trailgill Caves? Quite a spooky place, with underground river running inside the main cave

They are a couple of fine hills ! Did the 'loop' twice- in different directions, but that is the type of awkward sod I am

Glad you enjoyed it, I just love Assynt-and its surrounding hills

Well done to Arash on his first Munros, no wonder he was tired doing that after driving all night, hope you didn't put him off

Where's the dogs then

Always good to get new folk on the hills

Love that part of the Highlands, the roads are fantastic too

Some nice shots of and from these two

My day on these two was in clag and bitterly cold winds. Seeing your photos tells me why I really should return

steven65 wrote:Nice report there Dogplodder - thanks for the fotos.... I`m off up north to do the " top four " next week - hopefully not in the rain .

Very special area - hope you get decent visibility for them.

Think it lived up to his name and he was feeling the heat a bit... but I like that he didn't make a fuss and just got on with it.

BlackPanther wrote:Did you get a peek into Trailgill Caves? Quite a spooky place, with underground river running inside the main cave

No, have to go back for that experience. It might have been a good idea to cool us down and get away from the clegs.

soulminer wrote:They are a couple of fine hills ! Did the 'loop' twice- in different directions, but that is the type of awkward sod I am

Glad you enjoyed it, I just love Assynt-and its surrounding hills

Do you mean a loop rather than out and back the same way? What was your loop?

Up Gleann Dubh, through the pass between Conival and Breabeg, up to the 960 point, on to the summit, and off via Conival. Reversed this the next time

First time I did it, I was scrambling across the ridge above Dubh Loch Mor and heard a dull rumbling. A second or two later a Jet flew past, close enough to see the pilot