I was on holiday for two weeks so took another opportunity for a midweek walk in the cairngorms, accessing from the North side with the munro shopping bag looking for donations.
This time I planned Bynack More, Beinn a Chaorainn and Beinn Bhreac with a long return walk. (gaelic meanings in title) I left from Glenmore Lodge at 0715 and cycled the tourist path to the old Bynack stables passing the usual landmarks, most notably the green loch, that had not warmed up yet. 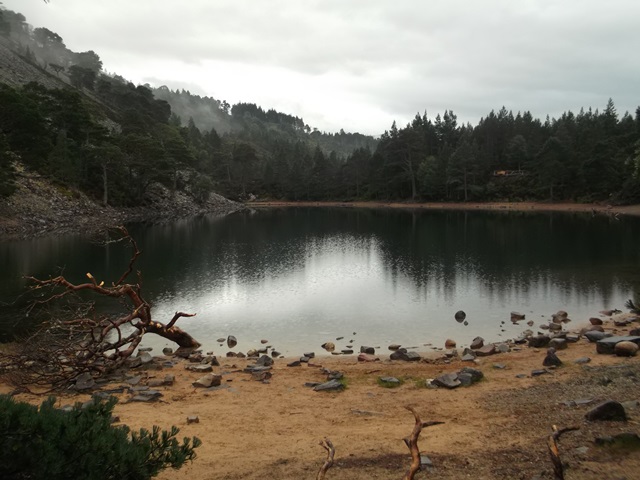 Lochan Uaine (was green coloured at north side)

I placed the bike under the bridge then followed the sound path up to the summit cairn for 0920. The clouds were low and provided cotton wool blankets for the surrounding hills. 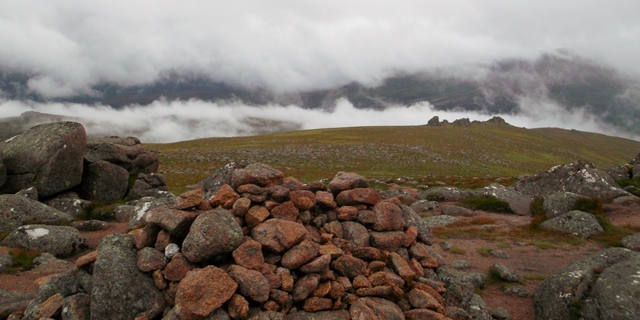 clouds hanging on ridge to Beinn a' Chaorainn

I continued SW down through the little and large barns to reach the Leachd a’ Bhaine. I then followed the path to the refurbished Avon refuge hut. Not sure but may have surprised a young couple. Sorry about that if you are reading. We had a polite conversation before I crossed the river Avon via the stepping stones to ascend the north ridge to the stone covered top and large domed cairn of Beinn a’ Chaorainn at 1130. The summit provided a good platform to view Beinn Mheadoin and Derry Cairngorm and over to Ben MacDui. Over to Ben MacDui and company

I headed SW to cross the plateau Moine Bhealaidh at 850m toward the distant Beinn Bhreac. The going was boggy in some sections but not too demanding due to the recent dry spell and good visibility. I sourced a path near the summit which led to the stone covered top and cairn at 1250. Across plateau to Beinn Bhreac

SW toward Beinn a Ghlo I refuelled at the lower windbreak then set off for the return leg. I went via the west top 4m lower then down onto Craig Derry before descending heather clad slopes into Glen Derry. A wee climb was needed to reach the bealach at 741m then along the Lairig an Laoigh which provided a good path back to the Avon refuge passing two lochans. Along the lairig an laoigh

The rain was heavy so I went in to seek refuge from the deluge and change socks as the junk Meindl boots had sieved again. Not a pleasant sight for the lady who was already drip drying in the bothy. I put on the trusted Morrison’s carrier bags over the dry socks and was ready for the final leg back to Glenmore lodge. I walked along with the South African trainee train driver to complete the return to the bridge. It was quite wet and windy on this exposed section and not pleasant walking for the lady who had just completed her first solo munro (Bynack More and then down via the declassified A Choinneach). At the bridge we said farewell and I got back in the saddle for a rapid return to the car at 1630.
I cleaned up and dried off then went to the Aviemore chipper for a low fat black pudding supper.
This walk provides an interesting route variation for Beinn a Chaorainn and Beinn Bhreac for those travelling from the North and also helps save on fuel costs in these demanding times.

Done the other two but not a' Chaorainn and have been toying with this approach. How long do you think it would take to walk (no bike) from where you started via the Lairig an Laoigh to B a C and back? As you say it saves so much fuel if you live north of Cairngorms.

dogplodder wrote:Done the other two but not a' Chaorainn and have been toying with this approach. How long do you think it would take to walk (no bike) from where you started via the Lairig an Laoigh to B a C and back? As you say it saves so much fuel if you live north of Cairngorms.

Hi Dogplodder,
No worries that was the main reason I chose to try this route. I would reckon that leaving from Glenmore lodge and walking to the Avon refuge hut then up the north ridge to BaC would take about 4/5 hours and returning via the LaL would be about 4.5. Suggest 9 hours would be enough to enjoy the scenery and may still be better than heading south. After crossing the "stepping stones" I just headed directly up the heather to reach the stone covered ridge which led to the summit. There were no steep or exposed sections if you were taking the dogs. Hope this helps.
Kenny

Thanks Kenny. As you say it sounds a good one for the dogs.