We managed to get a wee voucher deal for a hotel in Balquhidder so thought this would be a good opperchancity to get some hills in in the area, that would otherwise involve long drives.

With a few options investigated and WH reports printed out last week, we opted to do Meall nan Tarmachan on Sunday, with either Meall Corronaich/Meall a' Choire Leith or Stucd an Lochain on the Monday.

Leaving Glasgow around 7:30am, we made very good time and reached Killin around 9am.

Margaret has climbed Tarmachan on a couple of occasions by varying routes but we opted for the WH route. There have been a few changes up this way since our visit to Lawers a couple of years ago. The old visitor centre had gone then, but the car park was in the same location on the right, below the protected area, fenced off from the deer with a voluntary £2 suggested donation. As we turned up the Bridge of Balgie road, away from Loch Tay, much of the forestry had been felled leaving a much more open landscape. Winding up the single track road, there are new signs for the Ben Lawers Park and a new car park, this time on the left hand side with a 'compulsory' £2 charge. We knew of another parking option further up the road, just a couple of hundred mtrs, so we headed up there. The road has a v shaped fork and is very rough, over a bridge and up to a small parking area, easily room for 4-5 cars and one already there. (Honest,,it wasn't to avoid the £2 charge! Heading through the gate and off along the track, the weather was looking promising. Pretty quickly, you meet the path coming up from the big new car park, and directly opposite, marked by a pole, was our chosen path up the hill. We had fleeces on but pretty soon, stopped to take these off as the heat built up. We had some showery rain and opted for waterproof jackets a little further up which also helped in the strengthening wind.

The path is very easy to follow and winds its way up over heathery ground. The shielings marked on the map are hard to spot with the heavy summer growth, just a few piles of stone walls peeking up out of the grass. The ridge is gained fairly quickly then its on up to the lower summit at 923mtrs. 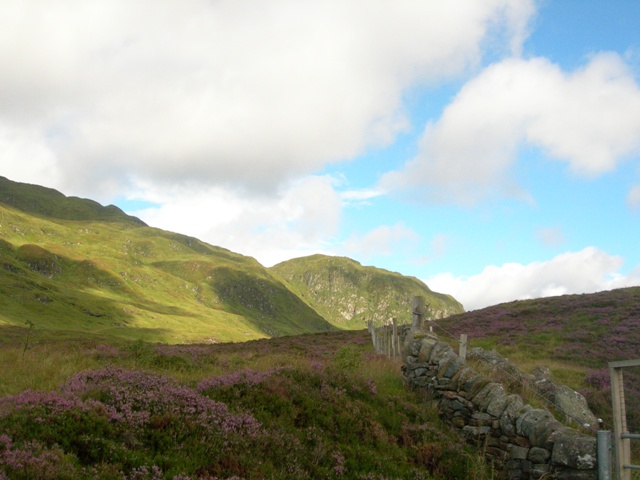 The crags below Meall nan Tarmachan Down the road to Loch Tay

Dropping down off the lower hill , the ascent up to Meall nan Tarmachan starts in earnest. That dame's got stile! Aiming for the top

This is a very steep section, but as with most hills on National Trust ground, a lot of work has gone in to making a stone walkway/path, the biggest benefit is less erosion of the surrounding ground. The stones aren't quite steps and can be hard to negotiate as they are on the slope but no real problems. Just keep following them ..UP!

Reaching the top of M n T around 2 hrs after we set out. Fab! we had a couple of attempts at the summit pic, 10 second timer,,,this one at least has us ready and smiling lol We were taking in the whole ridge so we didn't hang around too long and soon headed off South, then South West towards Meall Garbh. A solo walker had passed us on our way up earlier, he was now at the top of Meall Garbh and could be seen standing proud against the skyline on the pointy top. top of the world Over to Meall Garbh and B n E 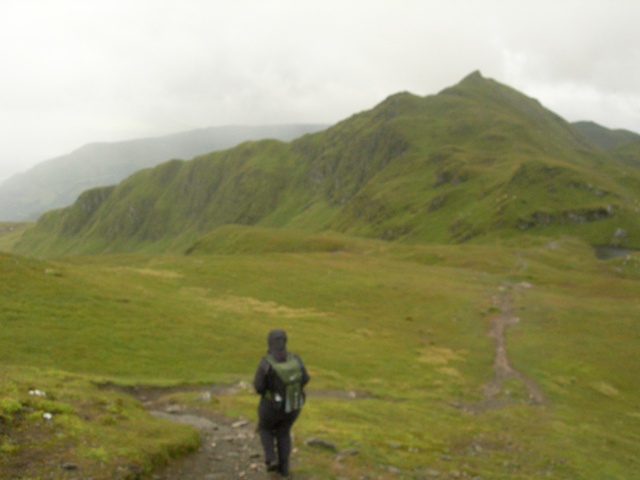 Coming over and off Meall Garbh had some tricky scrambling down over wet, slippy rocks. The picture here doesn't do it justice.. looks like nothing but that bit in the middle was VERY tricky....... We carried on over to Beinn nan Eachan and met up with a chap coming the other way, he had travelled from Arbroath,,not his first time on the hill and was walking with the wind at his back, good decision, was pretty blowy up there today. Puzzling over the map,,good job it was a clear day.

Having discussed our options for descent etc, he suggested that as we were taking in the last top of Creag na Caillich,,we should "just carry on down the ridge and drop off the end" Over to our lunch stop,,,what a spot.

With a promise to at least 'consider' that option, off we went. Reaching Creag na Caillich, we decided to carry on over the ridge to the end before stopping for lunch. This also gave us a chance to check the 'dropping off the end' option. After deciding it was too steep, we doubled back a short way and settled down for some munchies.

What a wonderful spot to simply just 'be' Miles and miles of total loveliness around, nothing but hills and mountains all around. Sitting just above Killin village, we could pick out the Main Street, Caravan Park, the longhouse etc, all nestling on a sunny Sunday afternoon.

Heading back along the ridge, we seemed to hit more up hill bits than we'd had down hill on the way over lol tired legs possibly. Making it back to the Beallach before B n E, there is a marker cairn, indicating the path down. The path is very bitty here and is easily lost but doesn't take much to pick it up again. The quarry marked on the map is totally invisible from here, but we had seen it from the crags above so had a good idea where to head for. We did, as ever, veer slightly off the path and came further down under the crags than we needed to. We could see the small brick building at the quarry and knowing the track we wanted was just below, simply made our way over.

It took about an hour to get from the far end of the crags, back to the Beallach and down to the track and another hour anticipated to get back to the car. The weather had closed in a bit and we got quite a bit of rain on the way down. Off the hills and being chased down by the deteriorating weather,

No matter, homeward bound. As is ever the case, a long walk out usually fluctuates between slowing down and speeding up, but, women on a mission, it took less than we thought to get back, after all, we had a hotel, a hot shower, cake, pringles and RED WINE at the end of this walk.

Couple of cuppas at the Falls of Dochart and THE best fish supper ever from The Smiddy in Killin, off to our hotel at Balquhidder for the above said luxuries. lovely...and now to plan tomorrows walk......watch this space.

Thanks andyroog, certainly was a good day,,(scoffing that lot later was worth the wait lol )

Nice walk this and plenty to do in the area. Bridge of Balgy tea room is nice in the summer.