We had made a decision last night, based on some heavy rain and the "boggy" alert on the Corranaigh/Choire Leith walk, that we would instead, take on Stuchd an Lochain.

I had first encountered Lochain when I climbed Meall Buidhe a couple of years ago and remember being a little miffed that my climbing pal that day (not M!) only wanted to do Buidhe as they had an appointment later in the day. (a big part of time in the hills for me, is forgetting everything else, not rushing back for an appointment with your art dealer lol )

I'd loved the look of the long ridge and Lochan nan Cat nestled below, its been in the back of my mind and was looking forward to getting up there.

Margaret and I had scoffed a bottle of red wine each last night but were up early (ish) breakfasted packed and off once more to the hills. We travelled North again from Balquhidder, to Killin, beyond and off on to the road to Bridge of Balgie. Single track, winding and dipping, we took in the northern views of Meall nan Tarmachan, this is a far better viewpoint to see yesterdays entire walk. We reach a block on the road, made up of HUGE highland cows with calves in tow. You don't have any option but to inch forward, giving the odd wee rev of the engine and hope they don't take the hump or turn round too quickly, those horns are LETHAL. 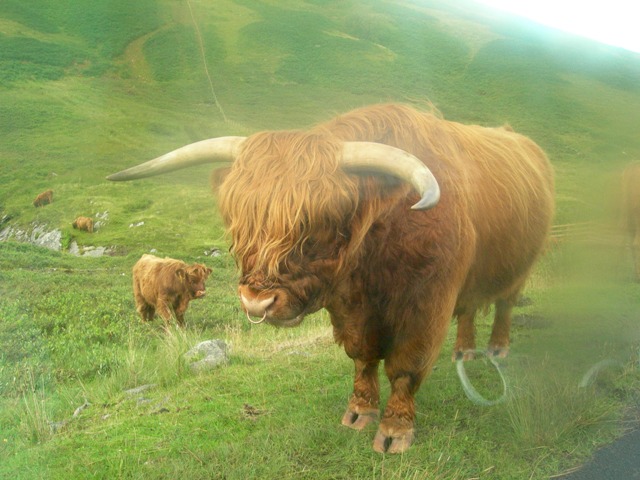 Turning left here and heading down the continuing single track road, the WH guide advises to follow the road to the Giorra Dam. This is signposted as 'Lochs Estate' and doesn't mention the Giorra Dam. We went past and it wasn't until I got closer to the River Lyon that I checked the map and realised we had come round too far. (Margaret had also been suffering with the windy roads and was feeling a little wan, so the stop time, wander by the river, gave her a chance to get some air and look out a sick bag lol ) A beautiful view over the River Lyon

Basically,,if you pass the second entrance to Home Farm and the Castle,,,turn back and take a first left. Lochs Estate.

Not too far up this road, passed some big white houses, the dam comes into view. Down past the trees and to the end of the road, parking for several cars and a noticeboard covering issues such as stalking, (deer/grouse etc,,not the dodgy illegal kind) Advice on sticking to the established routes to stop you getting your head blown off,,,that kind of thing.

There were some funny standard things beside the road along here and up to the dam...anyone know what these are? Im thinking, feed for deer, night lights, landing strip for aliens,,,,discuss and feel free to let me know. Giorra Dam and todays climb beyond

Crossing down to the bridge over the dam outlet, you have to scale a padlocked gate, no biggy if you're about to climb a Munro but not particularly neighbourly on what is a public route. The path winds left then right and up to the dam proper. Weather was fab now and the fleeces we put on at the start (chilly wind) were scrapped and we set off in the sun. Lovely. off up the path above the dam We climbed across the side of the lower slopes, gradually gaining height until we were above the boathouse, then the path, which was pretty much a stream bed, turned straight up. There were sections alongside the rocky path of reasonably good foot holds in the grass, some of these stretches however were very boggy and wet so we picked our way up the best we could. Its fairly steep here so we just dug in and got on with it. The gradient lessens a bit as the old fence line comes in to view, first up on the shoulder to our right, then straight ahead as we reached the ridge of Creag an Fheadain. Reaching the fence,,views off to the South

Following the fence posts over an easier section before a last steep climb took us up to C an F's flat plateau. The fence line takes a right then a left and the view of the ridge walk to come is laid out in front of you.

Dropping down into beallach above Coire an Duich, we could see 2 walkers coming in from the other side and 2 more a distance behind us. We had put our fleeces on as we reached an Fheadain and by now, the wind was cutting us in half, but as we were going into a climb, we resisted an extra layer until nearer the top of the ridge to Sron Chona Choirein and by the time we turned right to head over to Stuc an Lochain, we were hooded up, gloves on etc, biting wind. 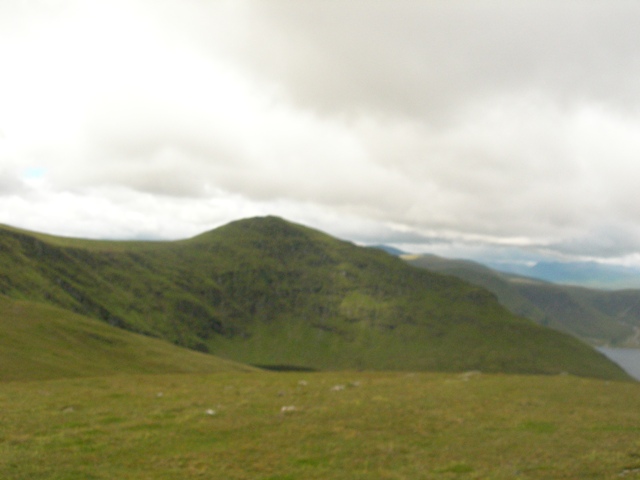 First views over to todays goal

The walk over to the main goal of the day was smashing, views back down to the loch, Lochan nan Cat below, and the whole vista of hills rolling out in every direction. We could see weather fronts passing to the North and South, rain falling in small patches, and thankfully, so far, avoiding us. We still had our eye on the 2 walkers behind us and decided, we would reach the top before them (now, how many people aim to simply not be overtaken? lol ) back over the lochan to the ridge ascent

The last stretch up to the summit is a steep but short section and the cairn is quickly reached, perching on the edge of the crags leading down to the Lochan. Munro 35 for me! Munro the plushie, on a Munro

We could see Rannoch Moore below to the West, with Stob Dearg at the head of Glencoe disappearing quickly under mist and cloud. We could see Meall Garbh and An Stuc, Lawers and Ghlas, Schiehallion, Meall nan Tarmachan, and sooooooo many more that I just wouldn't know where to begin in guessing their names lol We had a wander across the top before settling down under the cairn for a spot of lunch, looking down over Loch an Diamh and Meall Buidhe to the North. It was smashing being able to sit and take in the surroundings. We have had a terrific summer and seem to have been able to relax a bit more on the tops rather than being blown off.

The ridge had been a longer walk than I had envisaged but thoroughly enjoyed it. The walk back was windy and with a threat of one of the rain fronts coming straight at us, we got the waterproof trousers on too now. Thankfully the rain never came to much but the wind protection was much appreciated. Margaret was on a mission here,,not sure if she had a sneaky bottle of red waiting for her today. I was miles behind on a flat ridge,,what was she on?

Coming off the top of an Fheadein and turning left down the steepest part of the descent our progress slowed. Between rocks, water, mud and bog, we picked our way down, more carefully than we had picked our way up! This was tough on my knees with lots of those age related involuntary noises, "ooooh", " ayaaaa", "eek" etc. Thankfully,, the boathouse came in to view and the path could be seen a little further down, veering off to the right and the more level section back to the dam road.

The last couple of hundred yards,,I was aware that I was getting faster and faster lol just wanted the tough downhill bit to be over. Fab,,down to the path, rain on, climbed the gate and back at the car sometime just after 3pm. 2 days climbing in a row certainly plays havoc with the joints,,Margaret won't mind me saying ,,we ain't no spring chicks anymore lol

We were heading home after this, but fancied coffee and a bun somewhere, smashing wee café in Lochearnhead it was, sitting outside, feeding the ducks, watching waterskiers. Magic. Waterskiing on Loch Earn (not us, I might add)

Off down the road and home around 7.

nice one gillc and mags, your fair getting through the munros, i enjoyed reading that

Thanks mgmt. Always a fun day out lol My Munro bagging isn't serious enough to ever complete them (or is it? hmmm) but I enjoy checking them off,, AE ridge in a fortnight will add to the tally. Cheers,

We only visited Meall Buidhe when over that was but as your photos show the views are just as nice, it is a beautiful area and amazing how far you can see in each direction.

Ha! I was on Weight Watchers tuna (there are other brands available

) so that must have given me a wee energy boost or ..... was it just the fact I wanted the friggin uphill to end?! However, in hindsight the downhill was the hardest part on the day on the wee pins. Grand day oot mdear and fab scenery.

Users browsing this forum: Eszter, Kellybrodie, MrCH4RL3Y, Ollie and me and 92 guests