On a sunny day last week the boyfriend and I decided it was time to up our Munro tally and set off to Glenshee. The original plan was to do the Glenshee 9 over two days with an overnight bivvy in between - didn't quite go as planned but we managed to knock a few off the list.

After our run of recent good weather we were a bit apprenhensive when Glenshee was forecasted "intermittent showers and some sun". This was after a glorious weekend in Aberdeen which was forecasted rain but had turned out beautifully...hmmm. But not ones to be put off by the lovely Scottish weather, we decided to do it anyway. A wee bit cloudy on the way through Deeside, but we were met by sunshine in Braemar which lasted down to Glenshee. Off to a good start. Parking in the layby south of the Glenshee Ski Centre the plan was to start with the Glas Maol circuit. About 15 minutes in to the walk, now following a fairly steep wee path we realised we were on the wrong side of the valley for Creag Leacach, and to get there it would involve either carrying on up Glas Maol and doubling back or a scramble up the steep side face....so we thought, nah, we can come back to it tomorrow before we leave. And on we trotted. The path evens out along by a stalker's hut and continues upwards by the old ski lifts on Meall Odhar. By now even though the sun was hiding behind clouds, it was roasting - the only downside to bivvying overnight is going with a heavier bag Past the old and now very broken ski lifts the path goes up and up and up - Glas Maol is pretty steep going but a good 15 minute push gets you to a satifying top. And with good views and a bit of sunshine, we stopped for a quick lunch - oatcakes, chorizo and parmesan. Nom. From here we saw the ridge leading back to Creag Leacach, now very glad we hadn't doubled back to it. Also easily visible are the Cairnwell 3 - Aosda, Geogh and Cairnwell, the plan for day 2 (along with Creag Leacach as well due to me missing the path). 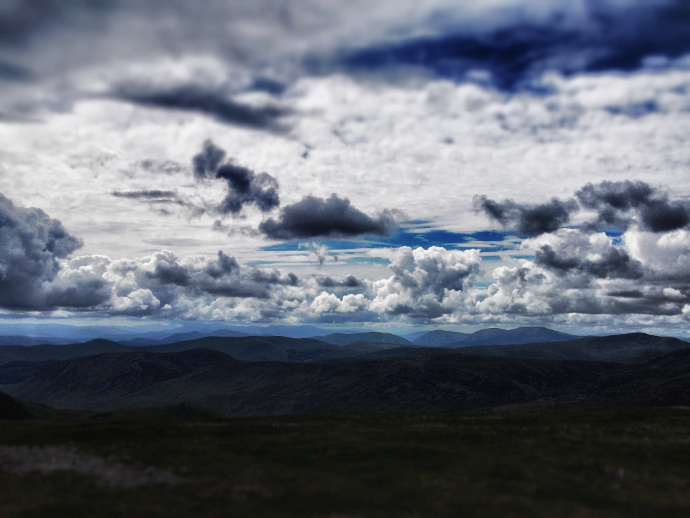 Down the other side of Glas Maol, we picked up the path leading over towards Cairn of Claise. Now out of water I filled up from a wee stream on the bealach between the two summits - nothing like fresh cold water when you're thirsty! Its a very straightforward path towards Cairn of Claise, a rocky peak with shelters. The clouds were beginning to gather properly by now and I thought we might be in for a shower, but so far so dry Back to Glas Maol Panorama from Cairn of Claise Scott in a shelter

We now decided to do a bit of off-roading. Diverging from the Glas Maol circuit, we thought we may as well take in Tolmount and Tom Buidhe while we were up there so hop-skipped down the valley a little and over towards Tom Buidhe. Not too steep, it's worth the diversion if for nothing than the views down Glen Callater, Glen Doll and across to Lochnagar. Across to Tolmount, and rather than go all the way back down to follow the path up, we crossed the stream separating the two and popped up the side, soon meeting with the path. The wind was getting up by this point and it was pretty chilly so a quick pic at the top and it was down again! Again without a path we crossed above Glen Callater and hopping wee streams, hillocks and rocks made our way right and upwards towards Carn an Tuirc...not an easy walk with overnight bags, it took us longer than we'd thought. Finally coming across a path near the top we were delighted - then devastated. We'd come across a very distinctive wall...
NO. NO, IT CAN'T BE. NOOOOOOOOOOOOOO.
We'd climbed back to the top of Cairn of Claise!

Gutted. I honestly could've cried, I was tired and hungry and wanted my dinner inside my cosy down bag. NAE SUCH LUCK. So the bags went back on and away we went towards Carn an Tuirc. To be fair, by this time the sun was starting to go down and it was beautiful. On the plateau between Claise and Tuirc we spotted around 60 deer all grazing away who quickly scarpered when they saw us coming. Almost at Carn an Tuirc after the detour...

From here we quickly picked up the landrover track and were soon at the top of Carn an Tuirc which happily isn't too steep. Sadly very rocky on the top so no good bivvy locations, we decided to head down towards the hut marked on the map, to hopefully get a better spot there. And now I take back the bit about Tuirc not being steep - bloody hell it's steep on the other side!! We managed to get down though and came across the hut, now not so much of a hut, more of rubble, wood and deer droppings. But perfect for a bit of dinner and to watch the sun go down. Carn an Tuirc AT LAST Me on Carn an Tuirc

After a hearty dinner of rice and tuna, we were within two minds whether to bivvy there or to head back to the car which would be a) more comfortable b) warmer and c) closer to our starting point the next day. I was sold! The ground at the hut wasn't ideal so we packed up again and set off. By now the sun had properly gone down and it was pretty dark. Now for the path marked on the map - oh wait, it doesn't exist! We came to the conclusion that it isn't well maintained out of stalking season, and as it was dark our chances were slim to begin with! So we cracked on, just hopping over hillocks and across streams in the direction of Glenshee ski centre who kindly still had lights on. This was difficult going as its really steep in places and with one good torch between us it was slow going. We soon hit the wee river at the bottom of the valley and followed it west towards the road and the bridge marked. Which took foreeeeeever. Finally we hit the bridge and then the road after 2 hours stumbling about in the dark. Only 3 miles to go til the car! However at some point Scott had managed to pull a ligament behind his right knee which was beginning to give him a lot of pain, to the point that he had nicked my pole and was hobbling up the hill to Glenshee so we were slow going.
Every cloud however...en route back to the car we were lucky enough to see the Perseid meteor shower. All the clouds that had been gathering during the day had amounted to nothing and had cleared off eastwards, leaving a stunning clear inky black sky, the clearest I've ever seen. So clear I could see the milky way clouds! Over the space of an hour, the meteor shower really took off, it was like a firework display just for us, coming at around 20 per minute at its fastest. Amazing.
So we finally arrived back at the car and took the decision to go home to Aberdeen that night, as Scott wasn't going to be fit for any hills the next day (he took another 2 days to fully recover). And apart from a suicidal hare which broke a headlight we had a fine drive back, getting to bed around 5 as the sun came up.
So disappointing we didn't manage all 9, but we're going back for the Cairnwell 3 on the way home from Cairngorm next weekend. And you'l be glad to know we're now going on a navigation course, think we need it!

Re: Meteors over Glenshee