You Kintail it's a Forcan Good Mountain!

You Kintail it's a Forcan Good Mountain!


So the eagerly anticipated WH Skye Meet was upon us. I'd arranged to do the Forcan Ridge with PeteR, Bald Falcon (Stevie) and Sunny Speyside (Evie) in the preceding days, and luckily, the expected dismal forecast looked like it might be relatively kind to us on Friday, before delivering all manner of torrential rain and howling gale force winds over Skye on the Saturday. Accurate weather forecasts are annoying.

So anyway, not wanting to face a camper-van laden A9 in the day light hours, I set off from Forfar about 11:30pm, and got to the layby before the Malagan Bridge in Glen Shiel at around 2:30am. I was still surprisingly awake, so spent a wee while faffing about with the camera in darkness. 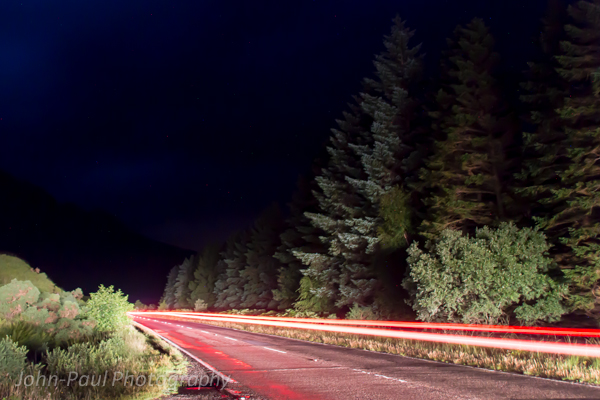 Light trails from a van which went past me at about 90mph!

Eventually I crashed out and after a fairly uncomfortable 3-4 hours of kip i awoke to find the dreaded midges waiting on their breakfast. 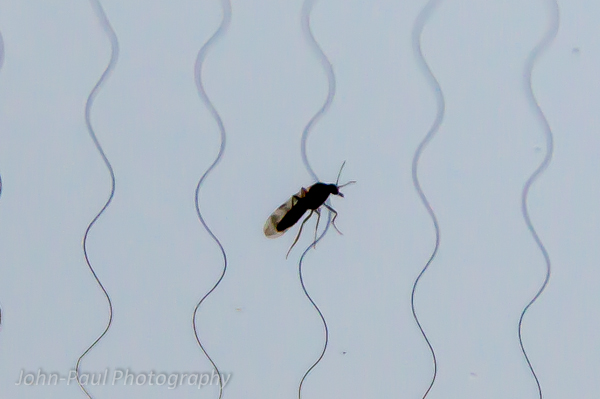 The others arrived after a short while, and once ready, and more importantly after a cuppie and some chocolate, we were off. The initial ascent is very pleasant, not too long but not too steep, and with ever-increasing good views of Glen Shiel and the sisters. I was fairly firing through the memory card's capacity. After a short while, we reached Bealach Na Craoibhe and started to head for the base of the Forcan Ridge itself. Evie took the lower path following the dyke (who the hell decided to start building walls up mountains?

) and Pete, Stevie and myself started the scramble. The start of the scrambling...

The initial pull up onto the ridge is quite easy. Indeed, following the route is pretty straightforward as it's mostly just a case of following the crampon marks. There are very short sections of path only, leaving the vast majority of the ridge as a scramble, making it an altogether better experience. 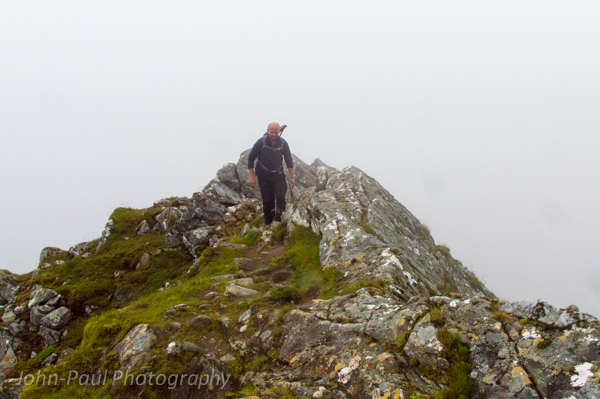 Before long, we reached Sgurr Na Forcan with the 10m down-scramble. Stevie took it on and got down safely, and though tempted to try it, I took the bypass path with Pete to the left. There wasn't much left to gain the summit cairn now, apart from a knife-edged ridge section. Very enjoyable though Last pull to the Saddle Summit

After the summit, we daundered to the trig point to catch up with Evie and had some lunch. Luckily, the clag relented and the views fairly opened out for a while. 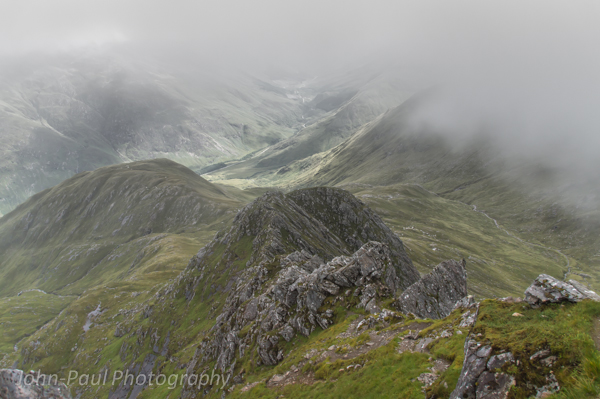 A wee lochan and Kintail :-) After a short while, we set off the descent path to the Bhealach Coire Mhalagain. Typically, after managing a fun and exposed scramble for an hour or so, within about five minutes on a proper path, I slipped and bashed my kneecap off a rock. This was to annoy me for the rest of the route and made descending less than fun. We got a fine look at the ridge from this angle as well. Zoomed out shot of the ridge 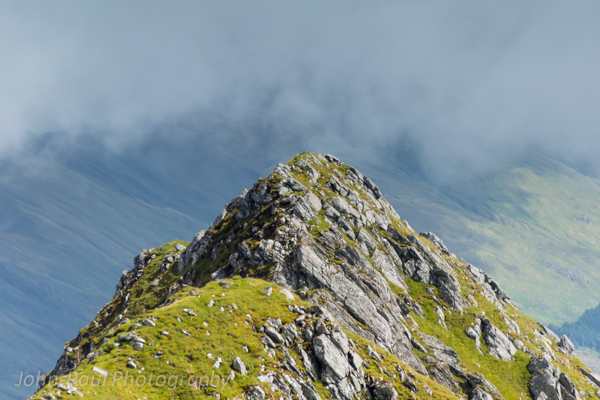 The first peak of the ridge

So off we headed to Sgurr Na Sgine or "The Peak of the Knife". Surely it should have been renamed "Peak of the Spirit crushing Climb over boulders followed by numerous false summits".

Actually i'm being harsh, it's a nice mountain in it's own right, and probably suffers negatively as it's paired with The Saddle. It was indeed a "stiff climb" as described by the site, but good views were still coming and going. We finally made the summit cairn after three or four falsies (due to the clag). A quick bite to eat (no photos as no views!) and we made the descent back down and after a brief chat over descent options, took the sensible route down over Faochag. The descent was horrible, but Faochag is a fantastic wee peak. One last look at the ridge

I'm really not a fan of descents at all, and this one was really unpleasant. Again though, the mishap happened back on level ground when attempted to get over a spot of marshy ground before Allt Mhalagain. A solid looking clump of grass wasn't that solid really, and i plunged into stinking knee deep mud. On the plus side, this simplified the river crossing to a refreshing walk through it

A cracking day out was ended with a small can of beer (courtesy of Stevie), a midge attack and a slow as hell drive to Sligachan for a very interesting weekend

Thanks to Pete, Stevie and Evie for an excellent day out.

Nice one John! and really good photographs to boot! Well worth getting up that unearthly hour for

The Rodmiester wrote:Nice one John! and really good photographs to boot! Well worth getting up that unearthly hour for

Glad i did, the road back this afternoon was absolutely horrendous in both directions. Daft midnight drives are the way forward.

Did you move the trig to the true summit?
Quite annoying! Haha

Nice atmospheric photos of a favourite peak of mine

Nice one JP. Good to see someone got some serious hill time in this weekend!

Cracking report and photos there John

Truly an amazing ridge this one.

But apart from the final part, this route is fantastic... Forcan Ridge looks even more daunting in cloud...
I wonder if the raven you photographed was the same one we spotted on the very summit of the Saddle (June this year): 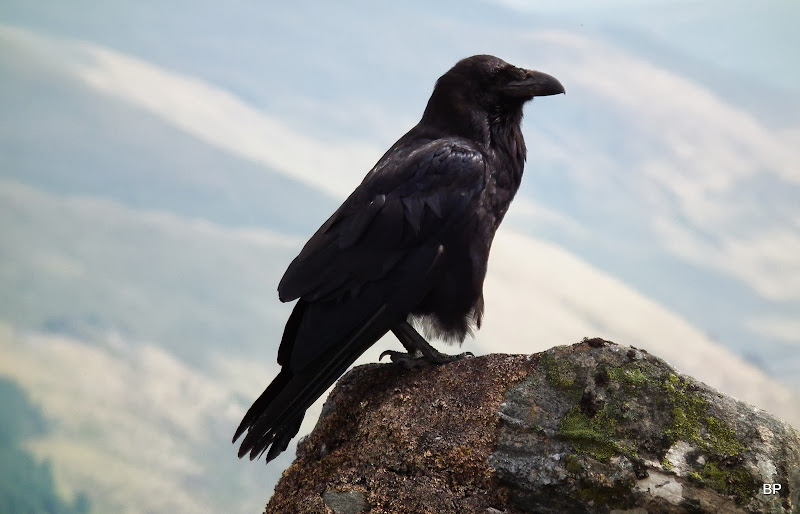 Cracking first photo and some nice atmosphere in the others too

It sure was a great day on these two

A day to live long in the memory.

Great to meet you, Evie and Stevie on the day too

, but once I've done that I might just add a report of my own too at some point.

Thoroughly enjoyed that report JP. Great walk, especially as the weather 'turned slightly' after this.

Because of weather we followed the wall to the bealach, so may return to the ridge tempted by your excellent pics.

Thanks for the nice comments guys.

BP - It's probably the same one. I think Ravens are creatures of habit and that one will be fully aware of the potential of scraps on the summit

SJ - I'd definitely recommend it. I'd like to go back and do this one on a good day again.

Pete - You got that knife-edge crest one?

jupe1407 wrote:Pete - You got that knife-edge crest one?

Cheers from
'The Forcan Chicken'

Well done to you all in bagging a couple of Munro's prior to meet. As we know it was a wise choice. Some good photos there John. Nice to meet you again at meet.

trekker53 wrote:Well done to you all in bagging a couple of Munro's prior to meet. As we know it was a wise choice. Some good photos there John. Nice to meet you again at meet.

Hope you've got some decent weather after staying on!