Track_2013-08-19 192051.gpx Open full screen  NB: Walkhighlands is not responsible for the accuracy of gpx files in users posts
This is a pleasant if undramatic walk for anyone with half a day to spare in the Dalmally area providing some splendid views of the Cruachan range, Glen Strae and Loch Awe. I report it here as an aid to those of you who may fancy a gentle afternoon out. Be warned, however, of the 14 plus km 9 are pathless across a mixture of grass, tussocks and heather.

After a morning dealing with drainage (the perils of living in a house on a West Scottish hillside) I set off at 3pm up Glen Strae with The Whippet. The misty rain shrouding the Dalmally Horseshoe in picturesque fashion soon catches up with us and proves to be rather less picturesque at close range. But the wind pushes it onward and by the time we reach the bridge across Allt Dhoirrean we are once more dry. The swimming hole beneath the bridge looks more like a whirlpool bath with the stream in spate. Continuing along the track we take the right fork where it splits and head into the forest (the left fork climbs up along the edge of the forest and continues up the glen to the deserted settlements). The roar of the Strae waterfalls grows louder; there's a right fork here which will take you down to the falls and rapids - worth a look if you are a waterfall enthusiast and you have time. We hasten on, however, and soon find ourselves admiring Beinn Mhic Mhonaidh doing its best to loom, as it so often does, over the upper part of the glen. It's a fine looking lump from this vantage point. A little further and the track goes through a gate, uphill a bit, and then reaches a fork. Here the main track continues more or less along the contour and finally reaches another gate which gives access to the open hills. However, the right fork heads steeply up the hillside, also finally reaching a gate and open country, and this is the better route. Much more height is gained and much more quickly on a rough, stony track which now skirts the edge of the forest proper, although the OS map has it going through the woodland. The gate at the top, secured both by a latch and a piece of twisted wire (have the deer learned to lift the latch?), marks the end of path walking. Or almost. We follow a kind of path for a short distance NE but then strike out in a broadly easterly direction heading for Lochan Uaine which sits just beneath the summit of Beinn Donachain. It's all up and down and round and about stuff, weaving between small waterways, boggy ground, and inconveniently placed knolls. The Whippet and I constantly disagree about the best route but finally come over yet another crest to find the lochan. Good views of Beinn Mhic Mhonaidh and upper Glen Strae all the way up, and Lochan Uaine itself is rather lovely in a hill lochan kind of way. Lochan Uaine from its east bank

Since the sun has now emerged, and there is shelter from the wind, we linger a while by the lochan contemplating whether to go on up to the summit of Beinn Donachain. It's not far above the lochan but looks too dull a trudge to bother with so we set out on what is, after all, the main point of the walk - to work our way SW along the ridge above Glen Strae. I use the word ridge loosely here. It is true that there are drops away to Glen Orchy in the east and Glen Strae in the west, but the country in between is more of a plateau enclosing a series of minor summits. Ridge-like it is not. Our first stop along the way is the cairn marked on the OS map at 190312; at 644 m only 6m lower than the rejected summit of Donachain. Here there be views. Beinn Lurachan and behind it the NE ridge of Beinn Eunaich

The sight of Beinn Eunaich's NE ridge reminds me, if not The Whippet who is no great map reader, of our previously reported retreat from the heat at the ridge's high point. Ah well, another day. Meanwhile, we have rough country to traverse as we work our way toward the distant Loch Awe. Away to our left a fence is curving round, always a bad sight for The Whippet, but as it turns out this is an ex-fence, a late fence, a wire-free fence, one which will present us with no difficulties. So we follow it for a while dropping down and through an impressive array of peat hags. We are in deer country now, and The Whippet has got the scent and sight of them. 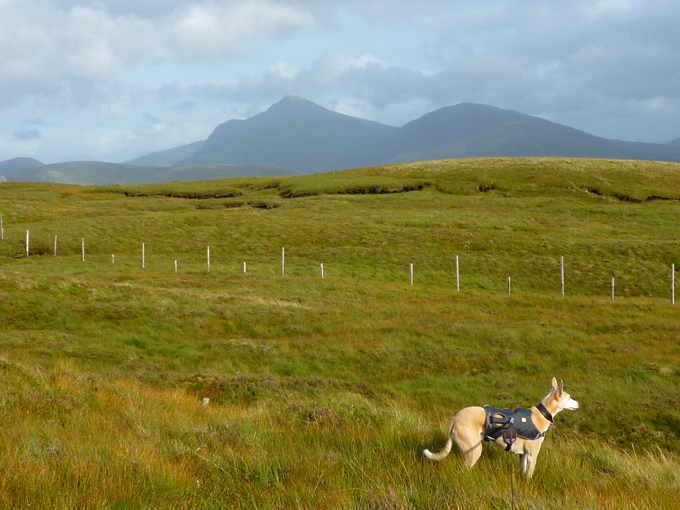 Leaving the ex-fence we head across in the direction of Glen Strae above which we can work our way along a series of small hills as we drop toward Loch Awe. Occasionally there are wheel tracks to be followed up and over the lumpy hills. There's one fence to be negotiated, but it has a gate at 167294. Mind you, the gate is tied shut, but it's low enough to lift The Whippet over without too much exertion on my part and panic on his. Finally we find ourselves on the crags above Dalmally and Stronmilchan, a landscape dominated by Strath Orchy and Loch Awe in one direction and the Dalmally Horseshoe in the other. 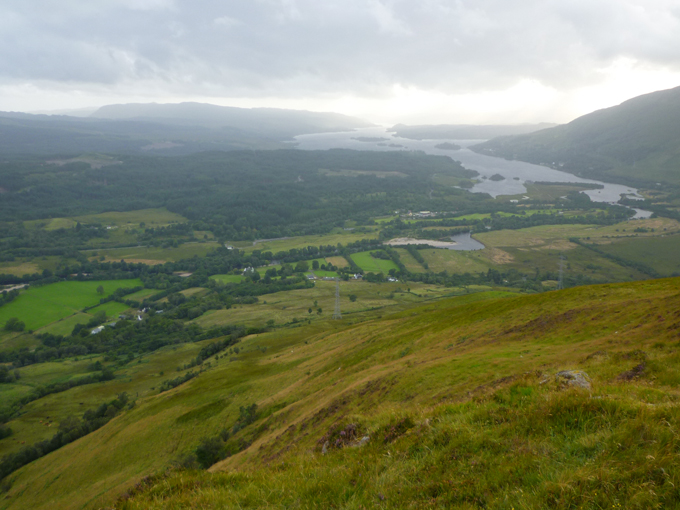 Atmospherics on the Horseshoe

It's all downhill now, and in several senses. I've tried various routes down this hillside and they are all equally uncomfortable. Take your pick. At the moment I favour sticking close to the crag on the initial steep section then working over to the right. The target to aim for is an ugly tin box of a building (essential to Dalmally's water supply) from whence a track leads down to the B8077. Keeping the building to our left we follow its fence around to the track. Then right at the road (The Whippet wants to turn left knowing full well that home is that way - he forgets about the car parked at the start of the Glen Strae track), cross Strae Bridge, and our afternoon diversion is complete. We've climbed 2531 ft, so perhaps it wasn't quite as gentle after all...