I'll start with the Hubster's good idea. "Let's park at the Ski Centre" he said "and that will save us a load of road walking at the end"

And that's what we did as we trotted off downhill towards the WH layby starting point. It was another warm day with not even a hint of rain and we were all feeling pretty chipper as we began the walk alongside the burn. Given the dry warm weather recently, the bog factor was pretty much zero and remained so for the duration of the walk. Armed with OS map, compass and trusty GPS we followed the WH route exactly. Sam however had different ideas and struck out to the left of us on a different path. We lost sight of Sam for a while (but he DOES have his Duke of Edinburgh Bronze Award, so we weren't that bothered).

Annoyingly, Sam made it to the steeper stoney section of the walk before us and he was delightfully ungracious in victory. No matter.

At this point we all struck off in the same direction climbing through the very steep stony section which was home to dozens and dozens of mountain hares. They seemed pretty nonplussed with our company and watched us climbing for a while before bounding away effortlessly which made us all feel rather pathetic.

Onwards and upwards and before too long (and after several false summits) the summit cairn of Carn an Tuirc was reached. We awarded ourselves a nice lunch and enjoyed the views, making out distinctive Ben Avon, the lumpen Ben MacDui and Bheinn Mheadhoin with its barns and Bynack More to the North and North East.

To the south we could clearly see the Paps of Fife, making us realise just how far south in the Cairngorms we were.

Before we set off Alice and Sam discovered a laminated poem complete with picture in memory of a young chap who had died aged 32. After reading the tribute Alice replaced the poem securely on the summit cairn and we moved on to the second Munro of the day.

WH describes the bealach as "truly featureless" and they were spot on with their description. Still, after the stony scrambling up the side of Carn an Tuirc, it was a welcome respite and we reached the second Munro, Cairn of Claise in no time and with seemingly minimal effort. I'm definitely more excited about this one than Sam. Cairn of Claise.

Stopped for a few photos and then onwards to Munro no. 3 the big Glas Maol. Towards the summit of Glas Maol we spotted hordes of people with fancy photographic gear....and their camera lenses were all pointing in the same direction. I was too bashful to ask them what they were all photographing and speculation within Team Railton ranged from "a mountain" to "an eagle" to "each other"

As I felt that my guess of an eagle was more sensible than the boys' guesses and checked t'internet once back home and it DID say that eagles were present in the Cairngorms. Feeling really stupid now that I didn't ask the photographers what had captured their attention. When I get back home, I'm having CAKE and it's gonna be THIS big. Glas Maol.

The approach to Creag Leacach put us in mind of Schiehallion and Bheinn Liath Mhor with its stoney ridge. On the way to the final Munro of the day, Creag Leacach

There was a great deal of up and downing here over the stones but we finally reached the rather precarious summit cairn and there for the first time during our walk did we meet other people.

Hopeless with accents that I am, I thought they were three Scots but Hubs assured me that they were American. Anyway they seemed quite content on their stoney perch and didn't mind as we posed for photos for our final Munro of the day. 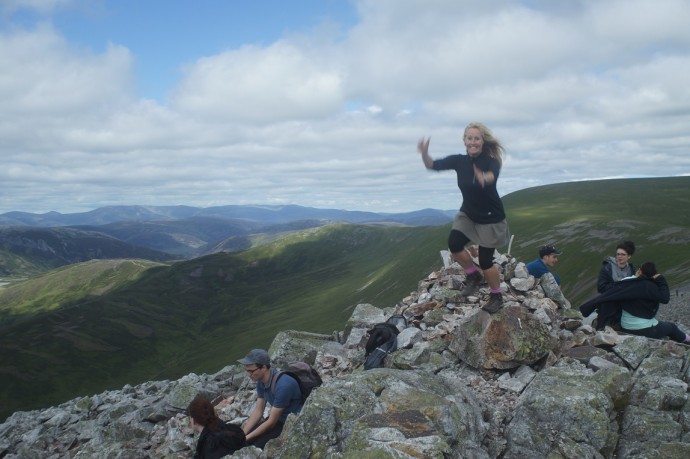 Reserved Englishwoman and all that, Creag Leacach summit.

The descent from here was INCREDIBLY steep with the grassy slopes lower down being trickier than the stones given the sharp gradient. At one point Alice opted to slide down because she found it easier (she broke her foot nearly two years ago and it was giving her some gyp).

The worst part of all this was the view of the seemingly endless A93 that stretched on for ever (ie: the last part of the walk). Cor Blimey Trousers!!! We have to walk THAT to finish???

Really, really glad that Hubs had had his brilliant idea to park at the ski centre as the WH layby would have been an epic roadside slog.

As we descended into the depths of Coire a 'Bhathiach we came across two muntjac deer and we followed them almost to the layby where the path met the A93. Got a couple of photos of them too. Showing us how it's done. Two very agile deer.

The uphill trek to the ski centre was a bit of a pain but we'd promised ourselves Aberlour fish and chips once we'd got home and that certainly put a spring in our step. Just before the Glenshee Ski Centre we crossed the border between Perth and Kinross and Aberdeenshire. Hi railton, a fine report on on maybe not the most outstanding hills, but it looked like you enjoyed yourself. A good day out all the same with a lot of fine walking once your at the summit. I agree going down from Creag Leacach is not particulary nice, a bit of a knee jerker for such a long way and seems to take ages

. I like your summit poses, please keep that up. Hope you enjoyed your cake!

Well done on the Beinn Mheadhoin ascent - That`s probably one of the two most remote Cairngorms summits, plus it has a lovely wee scramble to finish off the day. A longish day no matter what way you approach it. I did it from Linn of Dee one March Saturday with mountain bikes and we cycled up to Glen Derry and walked in from there. A long day , sure , but very rewarding. You probably gather that the Cairngorms are amongst my favourite hills!


My sympathies re your broken camera lens - I once had a camera roll off down a mountainside in its protective bag which effectively turned it into a football. It bounced on and on and on........never found it. Its probably still lying at the bottom of Aonach Mheadhoin at Glen Sheil.

You should try some of the Cairngorms from Linn of Dee and Invercauld. They have great tracks for cycling into the hills and it gives you a completely different perspective on this wonderful range . I think the hill scenery is much more dramatic from this side.

The Rodmiester wrote: I like your summit poses, please keep that up. Hope you enjoyed your cake!

Haha!! Thanks Rodmiester. I'm just trying to convey my delight on reaching the summit.......and oh yes I certainly did enjoy the cake thank you.

Well done on the Beinn Mheadhoin ascent - A long day , sure , but very rewarding. You probably gather that the Cairngorms are amongst my favourite hills!


My sympathies re your broken camera lens - I once had a camera roll off down a mountainside in its protective bag which effectively turned it into a football. It bounced on and on and on........never found it. Its probably still lying at the bottom of Aonach Mheadhoin at Glen Sheil.

You should try some of the Cairngorms from Linn of Dee and Invercauld.
Happy Climbing!!
Iain

Hey Iain,
Thank you for this and yes, can totally see why the Cairngorms are at the top of your list. Just LOVE this area. Truly spectacular!

As for your camera

Ulp!! Not good. I think that I'd be in therapy if that happened to me. I was grim enough over a busted lens. Really hope that your camera was covered on the home insurance!

Lastly we DID manage to walk Carn a'Mhaim from the Linn of Dee (it's just taken me a while to get round to completing my walk reports) and have to say that you are spot on! Having never walked around here before, I can honestly say that the views from Glen Lui and Carn a'Mhaim are my fave in the Cairngorms to date. Utterly outstanding! So thank you for the recommendation and we hope to be back up there soon