A little bit of Cornwall in Scotland: Tarbat Ness

A little bit of Cornwall in Scotland: Tarbat Ness

our_route.gpx Open full screen  NB: Walkhighlands is not responsible for the accuracy of gpx files in users posts
Day 2 of our Inverness trip and we headed up to Tarbat Ness, a long finger of land stretching out into the Moray Firth. Instead of taking the A9 the whole way up, we took the old road north - across on the Cromarty Ferry. This made Tarbat Ness seem even more like an island than it does already!

We were the first car onto the four-vehicle ferry. As we drove down the boarding ramp onto the boat, turbulence or whatever reason caused the ferry to move away from us, as if beginning to move off. We were already committed to boarding at this point, so with a little concern my other half put his foot down and we made it on without incident. The second car boarded without any problems at all, but when the third car came down to board, again the ferry seemed to move away from the ramp. This time, the ferryman yelled "stop! stop!" in an urgent tone, but the foreign family in the car either couldn't hear or couldn't understand the warning. Eventually they slammed on the brakes at the very last minute, leaving them teetering on the edge with the front of the car submerged in the water and the ferry fully afloat in the sea. They reversed slowly back to dry land, with the front bumper hanging off and scraping on the ground. Thankfully everybody was safe, the bumper clicked back into place and the ferry came back in to pick up the other two cars. Even so, the whole event seemed a little dodgy - I hope it's not like that every time!

Anyway, a few from the ferry: 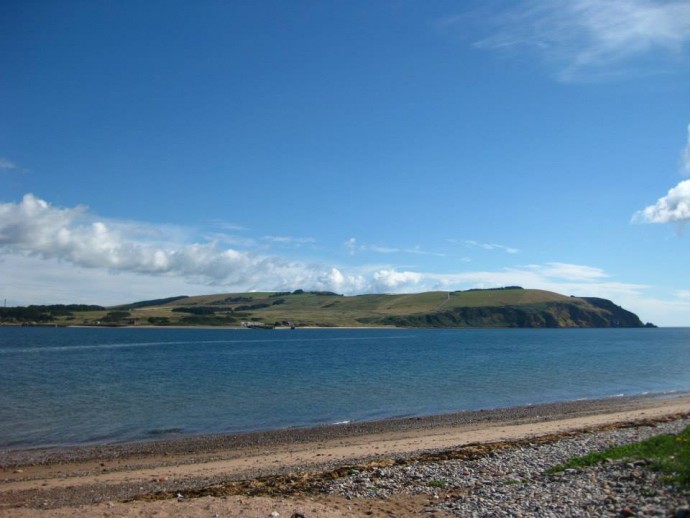 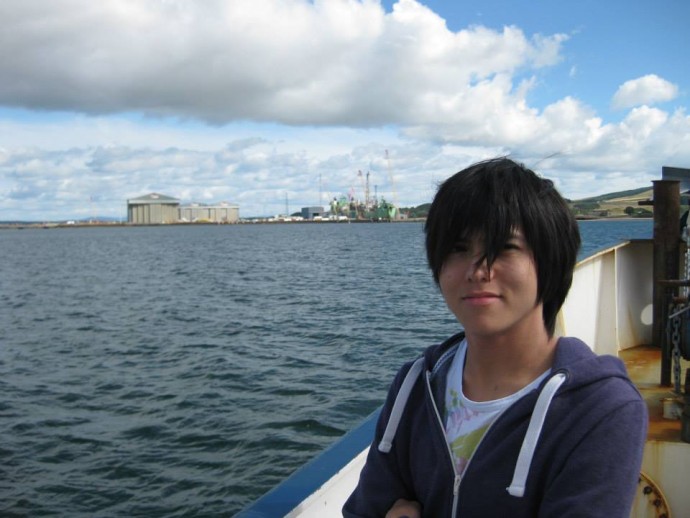 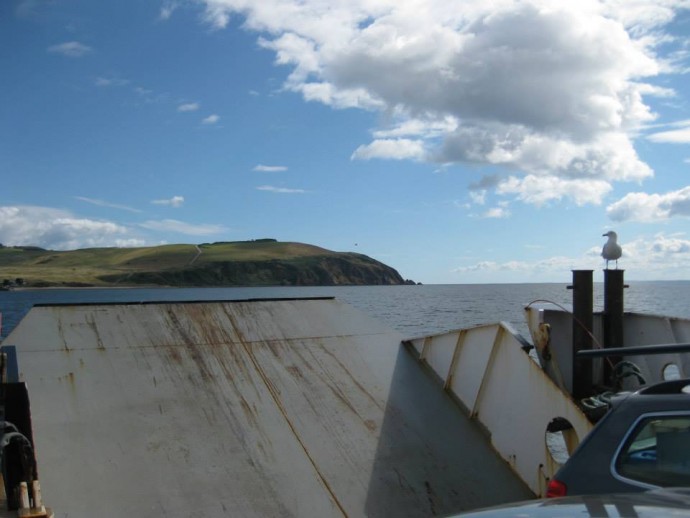 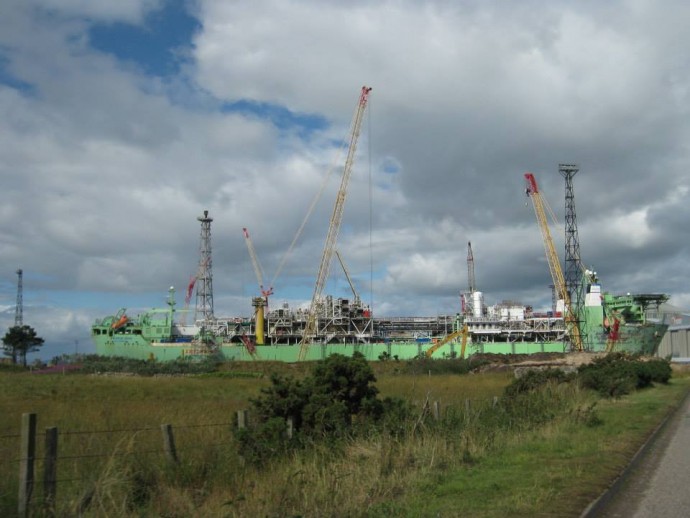 After a short drive, Portmahomack appeared ahead, and we were welcomed by a small crab. 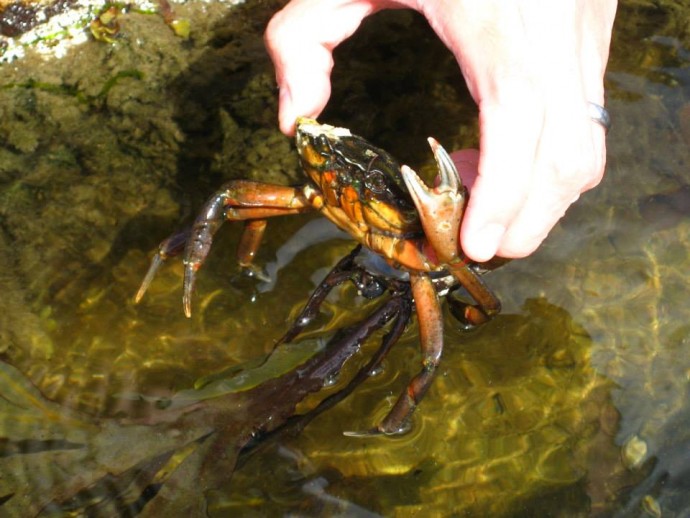 From the western end of the village, there were great views over the whole bay, and Portmahomack really did remind me of Cornwall without the crowds. 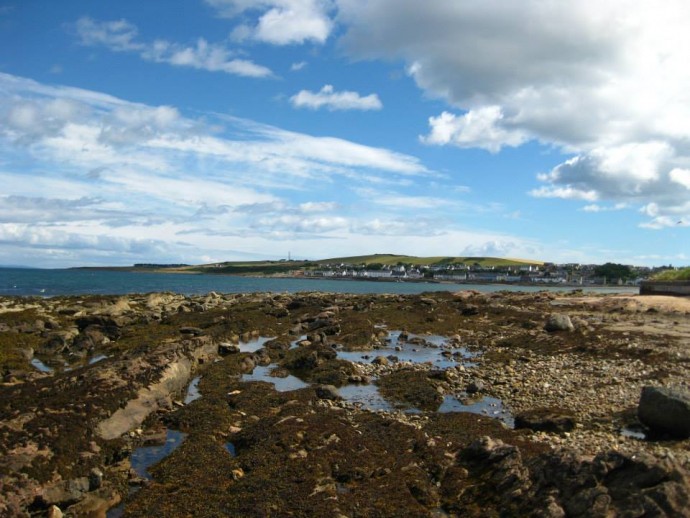 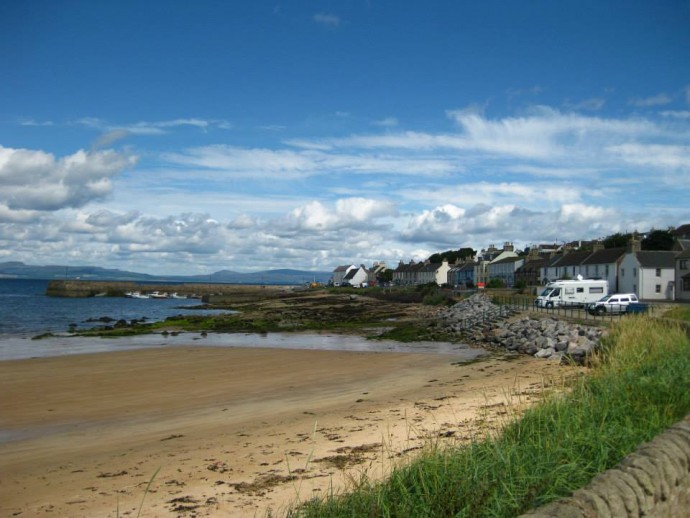 Prising ourselves away from the lovely village, we finally actually started walking! The walk up to Tarbat Ness began on a clear path which gradually got rougher, but there were great views all the way. 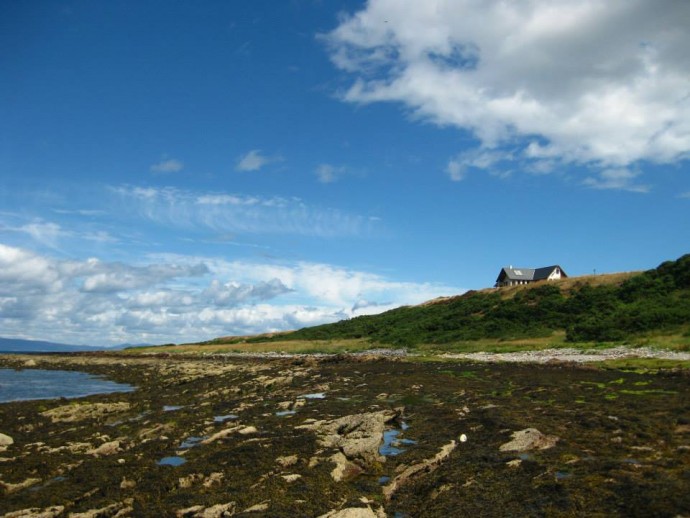 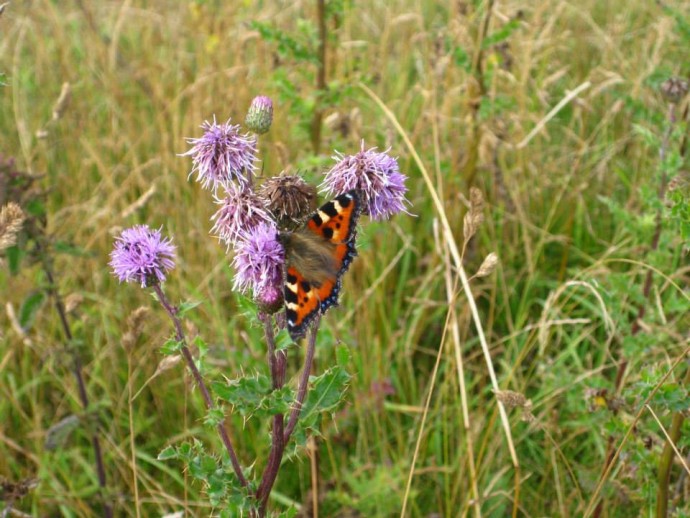 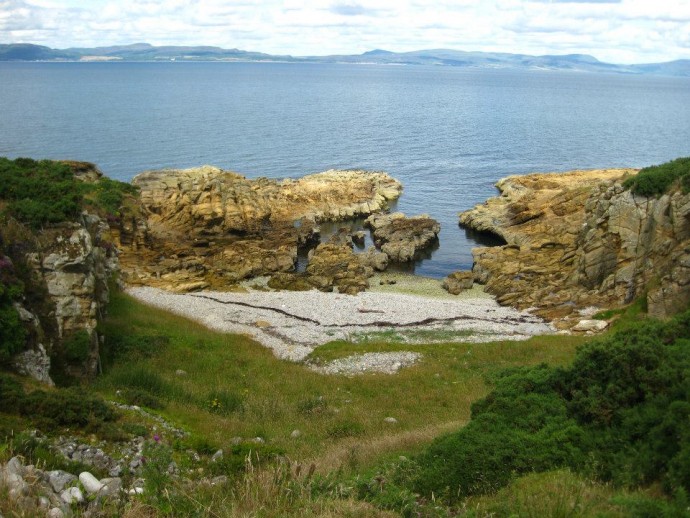 The lighthouse eventually appeared ahead - one of the tallest in Britain - beyond a huge flock of sheep. 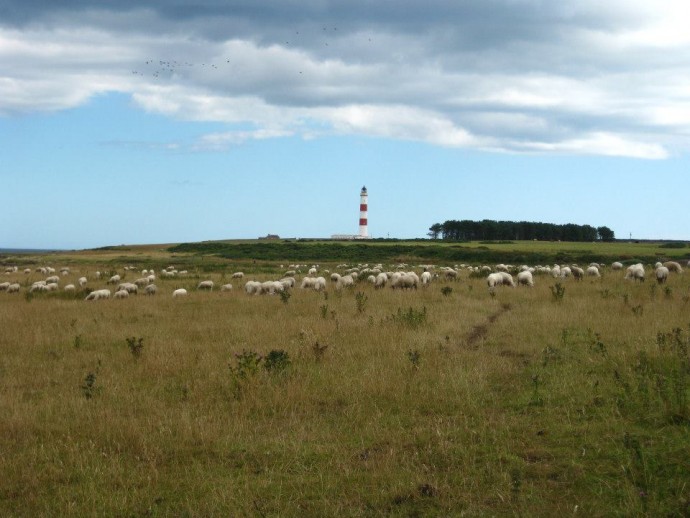 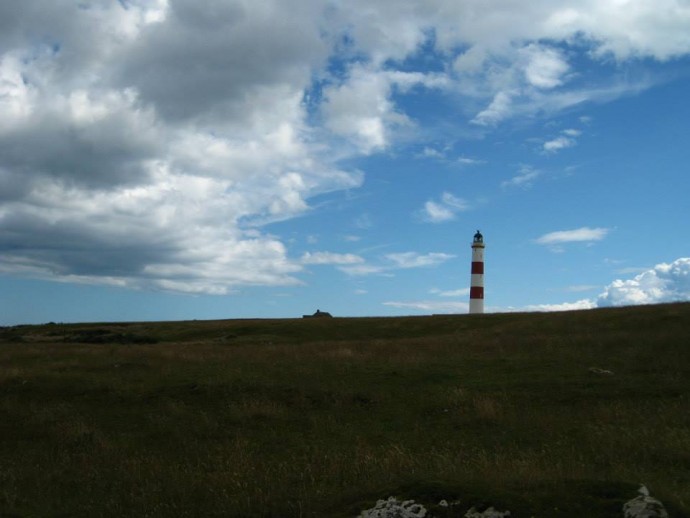 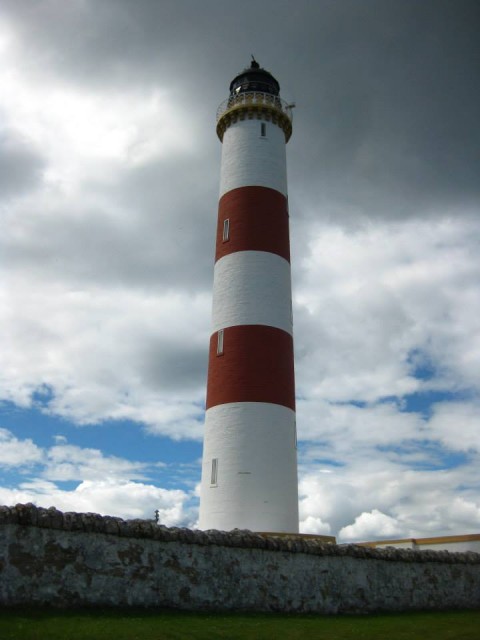 Around here we were struck by a sudden rain shower. It looked to be a pretty intense one too, but we were fortunate just to be side-swiped by it as the heaviest rain passed by over the sea to the north. Immediately after this I was struck by a minor but totally unexpected asthma attack - I've not had one for several years and never on a hill walk so wasn't prepared with any inhalers or anything. Recovering from this required a fairly lengthy delay followed by a slower pace, along with a mental note to re-order some inhalers on arrival back home.

The return up the south-east coast was more of the same, with some more decent views and again a path which provided rougher going than expected. Ballone Castle was passed with relief after a very long straight section. 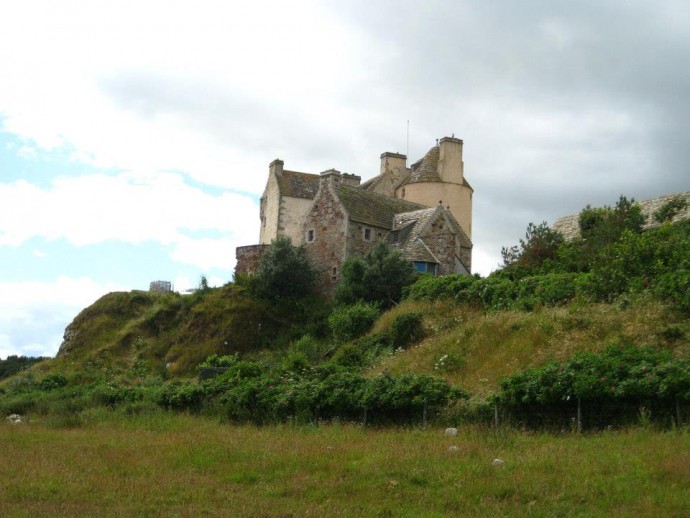 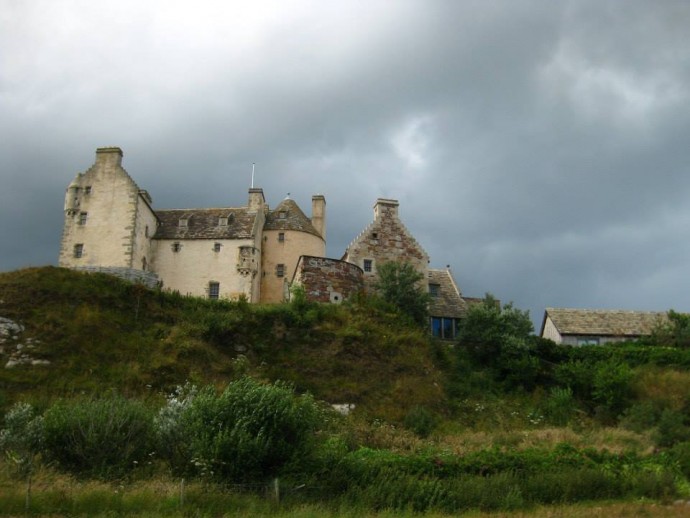 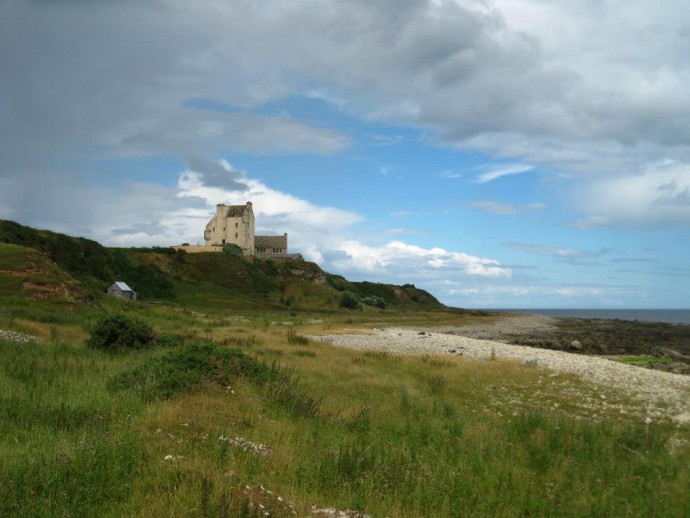 A further short walk over slippery, smelly seaweed (with the inland path overgrown) led us to the quiet hamlet at Rockfield, before a shortish road walk led back over the peninsula interior to the start.

In summary, this was a decent walk with good views throughout which really allows you get a feel for Tarbat Ness. On a calm day (not really today) it would also be a superb walk for dolphin-spotting. However, it's surprisingly rough, and tiring especially if you don't allow a full day! Portmahomack, in itself, is absolutely gorgeous. Worth the walk just for this part, so recommended... if you can survive the ferry trip (or the A9...)...

Re: A little bit of Cornwall in Scotland: Tarbat Ness

We walked this circuit last year and truly enjoyed it, especially the cliff-side

There is something Cornwall-like in this stretch of coast (my husband is a born & bred Cornishman and he always compares Scottish cliffs to his homeland). Shame that the lighthouse is not open to the public - it would be a great viewpoint.
Ballone Castle is an impressive building, they have an open day once a year and last year we had a peek inside. Unbelievable, how much hard work was put in restoring this ruin, with so much attention to detail. One successful story of saving an old castle, which otherwise would be lost in a few decades...

Re: A little bit of Cornwall in Scotland: Tarbat Ness

Thanks BP. I think I read your report about Ballone Castle a while back? But didn't make the link til you posted here. I personally preferred the other (first) half of the walk, but it was good all the way round!