Another day of sunshine and showers was predicted for to-day, I was quite happy with that because our Brothers walk the day before was similar but turned out to be much better, well then, with fingers crossed we hoped for the best.
We were originally going to do Ciste Dhubh only but looking at the map and reading reports I thought that including a Corbett would make for a good shortish walk, loosen the stiff legs from the day before, and still achieve a couple of "done that's"!.
We parked the car at the Cluanie and walked the mile or so on the road to the metal gates just past the layby on the A87, these gates mark the start of the walk up hill, they were easy to spot thanks to The Rodmeister who kindly told me about them in a WH PM in advance of our holiday, having prior knowledge of this kind of thing is a great help, thanks Rodmeister.
The walk up Am Bathach was a gentle steady climb giving good views all around. We stopped half way up to watch two police cars giving it some beans heading east on the A87 with their sirens on wondering how far they must be going to respond to an emergency.
When we arrived at the first top on Am Bathach we took time to look at the unfolding views, the Brothers were beginning to show themselves and were looking pretty impressive, nice to think we were on that ridge just 24 hrs earlier. As we walked on Am Bathach's broard ridge the sun showed it's self there was no cloud on any of the mountains around us, there was the slightest hint of a breeze, just comfortable, great.
We could see two people on the summit of Aonach Meadhoin, against the sky they had really sharp outlines. On the summit the view of Ciste Dhubh was breathtaking, 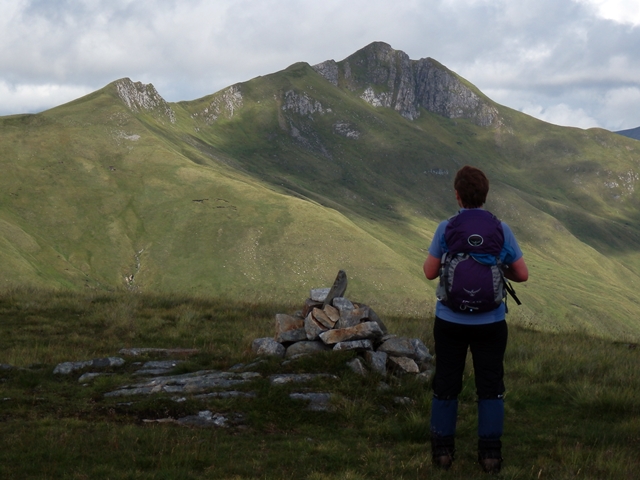 it looks a big lump from here and a bit daunting, but the general feeling was we've got all day so lets take our time. 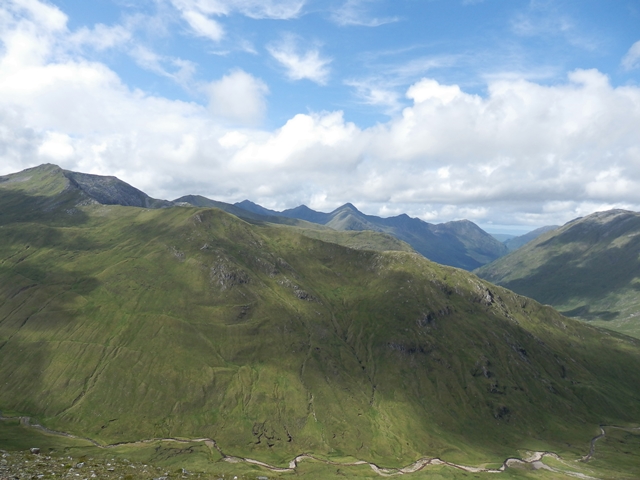 The way ahead from the summit is obvious even though the path is a bit intermittent and the slopes are quite steep, as we descended Ciste Dhubh was getting bigger.
At Belach a Choinich the path was hard to follow in parts and boggy. We could see the black line of the path up the slopes of an cnapach and simply made a beline for it, I can imagine this place could be awkward to navigate when the clouds are down, it's a bit featureless with the dips and lumps confusing the surroundings.
The going was soggy but soon became dryer higher up. Gradually the crags of Ciste Dhubh started to appear, this mountain looks good and is worth the visit. As we gained height the path became clearer and started to be more ridge like. The little dip in the ridge just before the summit was nice and sheltered, pleasant in the warm sunshine. When we arrived at the top all the surrounding mountains were completely void of cloud,
the Sisters looked inviting, that's another trip for the future, all the other neighbouring Munro's were giving me idea's for 2014, the view was just stunning, considering the forecast, we were lucky again, Scotland at it's best. 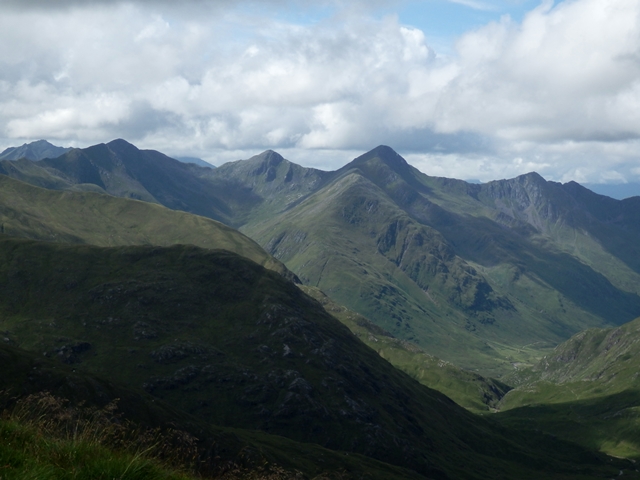 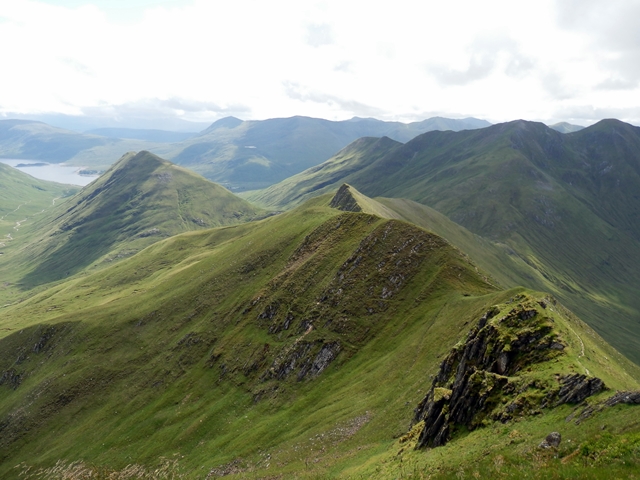 We decided to have our lunch here and then retrace our steps to the bealach. On the way down we met the two guy's who were on Aonach Meadhoin, they were fully loaded and on their way to the youth hostel at Alltbeithe so had a fair way to go.
From the bealach we followed the Allt a' Chaorainn Bhig all the way to the Cluanie, wet most of the way but the path was very clear all the way down. On the way down we had a heavy shower, this didn't spoil it because when the rain stopped and the sun shone it highlighted the crags on the South Glen Shiel ridge and made for a nice photo. 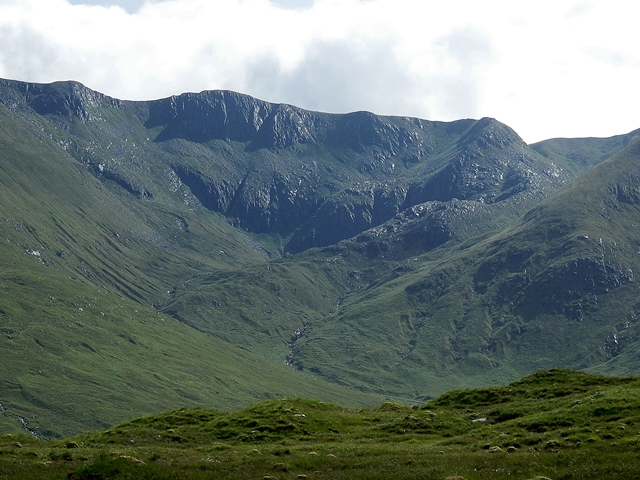 This was another good day, if you take the forecasts too seriously you'd never get out, our week was already going to plan, S.G.S Ridge tomorrow? Oh yes!
.