Summers far from over on Ben Challum

Summers far from over on Ben Challum


Flippin' 'eck Tucker! Only those of a certain age will get that

Seriously wasn't expecting todays temperatures but what a day.

My first meet-up with a fellow WH member. Tomsie had spent the past few days in the area and this was his last before heading North again, so I decided to join him for my 36th Munro.

Arriving (after passing and turning back !) at the layby around 8:35am, introductions and a wee chat, then booted up and headed over the road to the Kirkton path around 9am (neither of us actually checked) Crossing the River Fillan, you head up left to the 2 old cemeterys, passing the older, lower one then up the track towards the next one with 2 large conifers within its confines.

John had spoken to a Belgian chap in the layby and we could see him up ahead. The track climbs pretty constantly to the railway line, 2 gates to go through and over the line, well used line with clear views left and right so remember to check before stepping out. There is a footbridge to the East, in a clump of trees which I see the WH route guide says you are not permitted to use, anyone know why? (We saw 2 people using this to get over the line on our descent.

After the railway line, the path up is fairly vague and after a while, we changed direction, heading east to the deer fence, in line with Johns GPS (programmed with the WH route) We had both read about heavy bog and yes there were patches of boggy peat with a few opportunities to hang off fences etc to get over,,,(please don't let me fall in and lose my dignity, in front of a stranger lol) thankfully,, the wire held and we both got across. Realistically there was a lot less bog and water than we expected. We realised there was a couple up on the rocky tops to our left, was dry up there,,I wanted to be up there

The couples path and ours met further up the fence line, a quick chat with them about the differing routes, one of them had come our way before but descended over the rocks,,,much drier and now our chosen path down.

A bit higher up the path becomes rocky and broken up, we met the Belgian guy on his way down, again, stopped for a chat,,this guy is in love with Scotland and leaves his poor suffering wife at home while he comes and climbs Munros, (27 since May this year!!!!

) I do love when visitors see Scotland in such fine conditions, been a smashing summer.

2 other single walkers (or should I say lone?) passed on their way down before we reached the first rocky top of Ben Challum. Heading for the first top of Challum

This was a small cairn, with another cairn just slightly further on and a bit higher, for a minute,,I thought this was the second/Munro top of Stob Glas but a skirt round to the left and the real top comes into view. Views over to Ben Lui

A smashing path takes you past a rocky gully to the right, looking like man made workings but was just the shattered rocks broken away over thousands of years and harsh Scottish winters. There is a little under 30mtrs in height between the two tops but just when you think the climbings nearly over, the path drops down before climbing up to the true top at 1025mtrs. Over to the top at Stob Glas

The couple from earlier were settled at the top but we disturbed them to take some pics on both our cameras and then we settled on a rocky overhang, looking North over the Wall of Rannoch and to Nevis/CMD off in the distance. 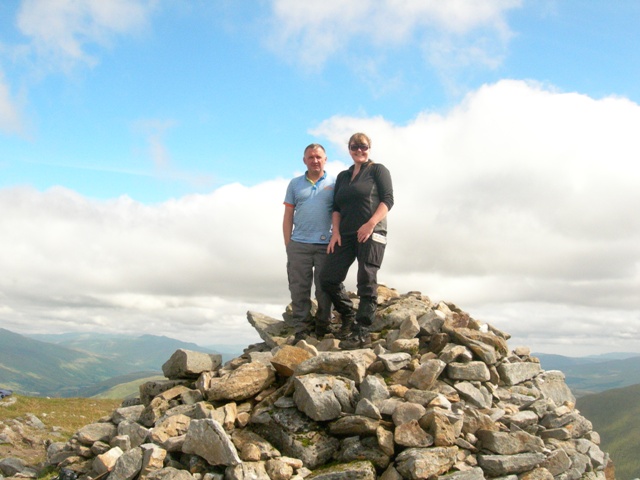 View back down over the ridge

All day, we had fabulous views in all directions, with only the views East towards Glen Lyon/Perthshire etc a bit misty. The sun shone all day, clouds drifted by as we had barely a breeze blowing, and yes, late August after a great summer, I'm STILL slapping on the factor 50, missing bits and getting my neck burned lol
Arms, face all fine, but there's always one wee bit. Even the midgies were out in force, at the top of a Munro, unusual but again the lack of breeze didn't help with that. No bites though. Looking North from the top, over Beinn a' Chaisteil to Dorain and Dothaidh (nevis off in the distance) After a spell of hill spotting, we packed and headed off the hill,,,another 2 blokes having just arrived the cairn. We crossed the fence at the spot we met the couple earlier and headed for higher, drier ground than our ascent. The descent was a bit hit and miss after that, we just kept heading over and down, the path all but disappearing in places but hey, a clear day, daylight, we were heading in a general 'down' direction, so just kept on. LOTS of sheep on the hills and they weren't too fazed by us at all.

We came off the hill a bit further West than our ascent but could see the level crossing on the railway and headed off back down to the St Fillans priory. Several heavily laden walkers, prob on the WHW passing, it was now nearly 4pm so hopefully they would soon have a sit down in Tyndrum.

Back to the layby, where John made me an offer I simply could NOT refuse. (cold beer in the camper van, for you with minds in the gutter!!!)

Smashing end to a smashing day on a, yep,,guessed it, smashing hill.

Thanks for your company John,,Im sure you were looking forward to a quiet day on the hill, so, apologies lol

Was up Challum on a braw day last sept. Only made it to the first top tho. The guy i was with didnae want to go any further

aw well its no going anywhere so next time

Aye Kev, nice wee hill,, been on my radar for a few months, couldn't believe the day we got, fabulous. And get your pal told,,the last bit was easy peasy!

Great to be out on a day like that!
We climbed Ben Challum on the only hot day of summer last year - yes there was one, May I think. We ended up in the River Fillan at the end for a quick swim

Yes,,,that memorable hot day in May 2012,,25th I think it might have been,, (seriously , I do actually remember to 2 days I got sun burned last year, 1 in March,,and that one in May lol BIG difference this year,,burned every month for 4 months running,,think Id know better by now

GillC wrote:Back to the layby, where John made me an offer I simply could NOT refuse. (cold beer in the camper van, for you with minds in the gutter!!!)

Thanks again for the company on last day of the hols

See I was smiling Good report and some good pics, wish my coin toss had gone the other way now seeing the views you got

well done Gill , in getting a beer out of John ,dont know how you managed it ,but i never get offered one

Backpacker wrote:Good report and some good pics, wish my coin toss had gone the other way now seeing the views you got

ceaser wrote:well done Gill , in getting a beer out of John ,dont know how you managed it ,but i never get offered one

Your gone never get the time to offer one

Backpacker wrote:Good report and some good pics, wish my coin toss had gone the other way now seeing the views you got

ceaser wrote:well done Gill , in getting a beer out of John ,dont know how you managed it ,but i never get offered one

Your gone never get the time to offer one

Looking at it, it's on my radar now to complete this year before Kinlochleven

A grand day you had , nice hill Chaluim