This was a great walk for a Sunday afternoon - started out foggy but this cleared as the photos show. I just did the climb to Priestlaw rather than the whole route as described here. The start is from the B6355 at the start of the Whiteadder reservoir. The first part of the walk is on a tarmac road leading to Priestlaw House and farm - it takes you over the Whiteadder via a bridge - you keep left past the Herring Road path on the right. Just past Priestlaw House there is a large area of hard standing - I guess for cars coming for the shooting as the hill is covered with grouse butts. I expect you could park here if you wanted to save a mile along the tarmac road - but its quite a picturesque walk along the side of the reservoir. 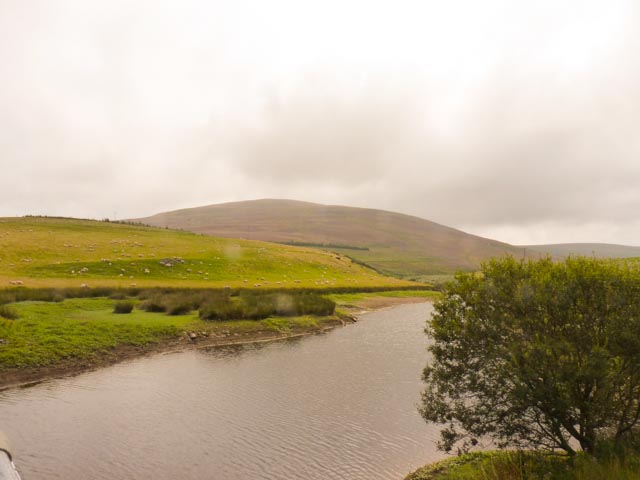 Soon the road starts uphill - its a hill track of the worst sort - ideal for Land Rovers etc. but not for walking as its quite rough. It reminded me of the boot track in Tiso's where I had bought my new Scarpa boots that were getting used in earnest for first time. The track continues uphill with Priestlaw Hill on the right. After about a mile uphill an indistinct track runs off to the right towards the summit. Luckily it was well marked by 4x4 tracks as it had been obviously used for shooting recently. Once you reach the top of the ridge a track runs straight off to the summit cairn and is easy to follow. I spent a good 30 minutes here - the only sound was the humming of bees on the flowering heather. From the summit I retraced my route downhill - I met two women who were walking from Garvald to Longformacus, otherwise - other than being overtaken by a fell runner (don't you hate them!) - I met no-one for three hours. Very peaceful!

Finally back to the car and a fabulous drive on the Johnscleugh Road through the Lammermuirs to Garvald.