South Loch Ness to Meall an Tarsaid by bike

South Loch Ness to Meall an Tarsaid by bike

Sub 2000' hills included on this walk: Meall an Tarsaid

Beyond cycling to work, the bike has been neglected a bit this year. I still have a handful of Marilyns that can be reached by bike from Inverness, so I decided to do some more. As I was recovering from a cold, I decided to leave out the Buarach and a complete circuit of Loch Ness. Anyway, the A82 is never much fun to cycle on at the best of times, never mind on a bank holiday weekend.

Whitebridge.gpx Open full screen  NB: Walkhighlands is not responsible for the accuracy of gpx files in users posts
I left Inverness at 9:30am - it was warm and calm, but there was a lot of low cloud around. This showed some signs of lifting as I climbed up the Essich road. Dores and the Loch Ness-side road might have been a slightly shorter route, but the Loch Ashie/Loch Duntelchaig route is more scenic. 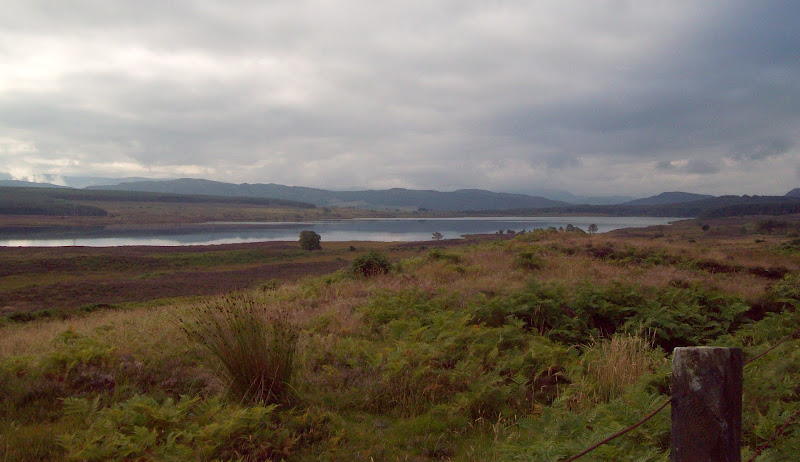 Easy riding after the initial climb, and one of my favourite areas for a post-work cycle. I've done most of the Marilyns in this area after work on the bike, but Meall an Tarsaid is just that little bit too far for an evening! 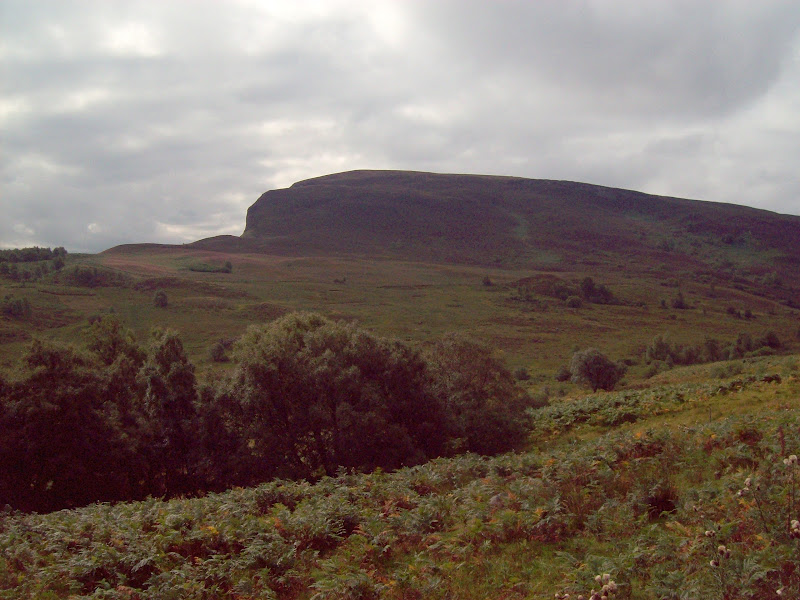 There is an option to stay high all the way to Whitebridge, but one of the best roads in the area drops down to Inverfarigaig. In its middle reaches, it is barely a road as there is very little tarmac left on it.

Down the Farigaig to Dun Garbh and Loch Ness: 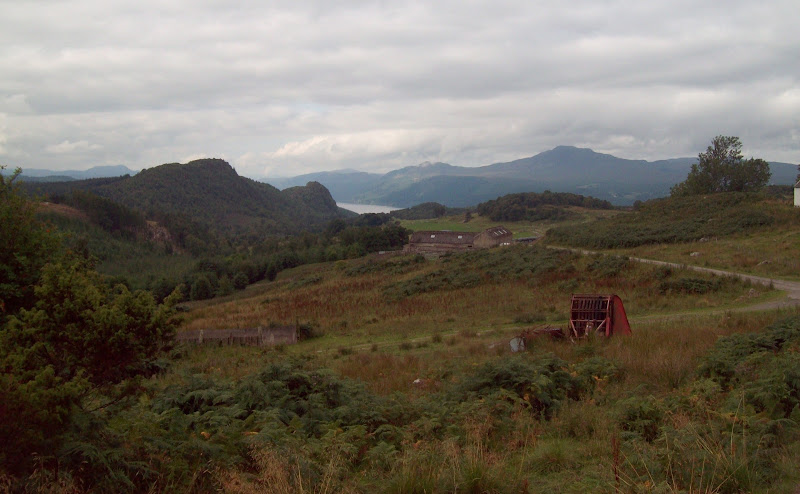 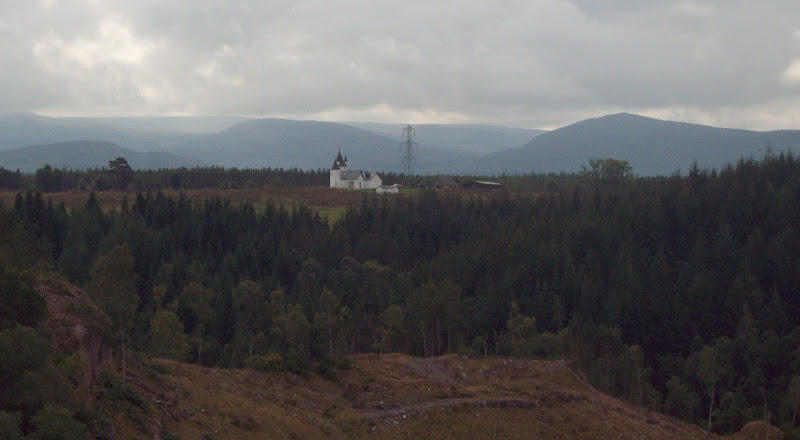 The surface improves again as you enter the picturesque lower gorge of the Farigaig, and drops via a series of hairpin zigzags into Inverfarigaig. I passed 3 road bikers here. I can imagine there was some swearing and gnashing of teeth as they hit the badly surfaced section higher up on their lovely shiny bikes 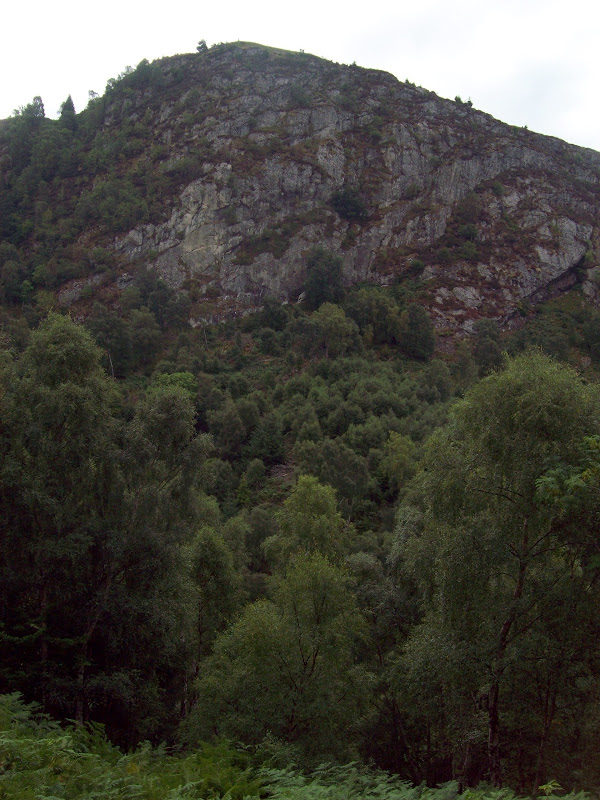 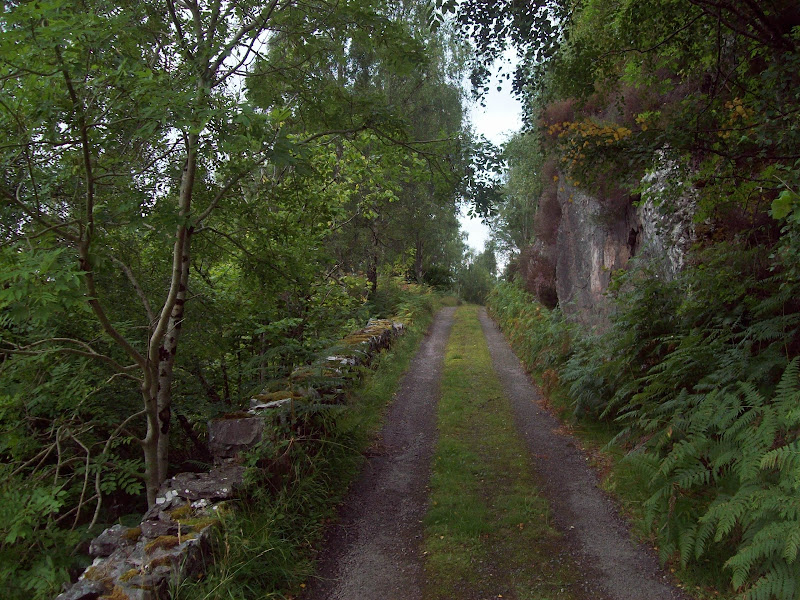 I stopped briefly for some views. If you pick the right spot, it is a 30 second stroll through the woodland to the crest of the ridge, from where there are great views down Loch Ness. 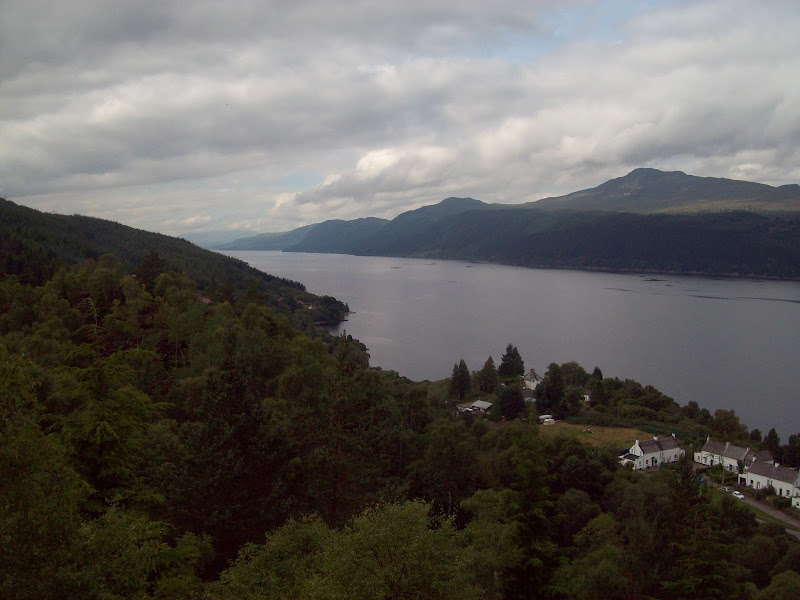 Then it was down into Inverfarigaig, and a gentle climb up to Foyers. Once in Foyers, the road steepend dramatically, then dropped me back down into the valley of the River Foyers. The Falls of Foyers are well worth a look, but I didn't stop there this time. If I'd stopped at every interesting place en route, it would have been an overnight trip! A bit more pleasant winding through the woods brought me to the final long straight into Whitebridge. A short distance past Whitebridge, I turned off onto the Fechlin.

I locked my bike against a fence at what appeared to be the closest point to the summit. A wriggle through a couple of fences and a stroll through the woods took me to the heathery hillside beyond. Not sure if it was down to feeling slightly weaker than normal, but the hillside was very steep. I got up most of it by hauling myself up on armfuls of heather. Took me about half an hour to the summit. 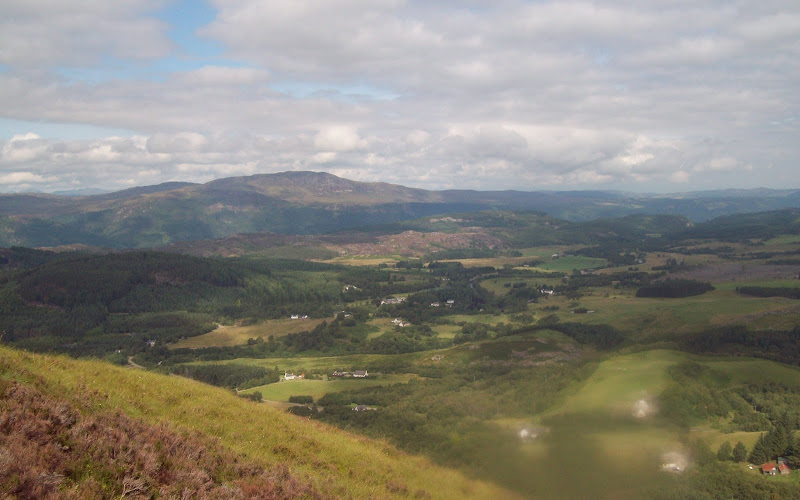 In terms of prominence, this may be the only Marilyn in the immediate vicinity, but some of the surrounding summits were clearly worth a visit as well. In particular Beinn Sgurrach across the glen. 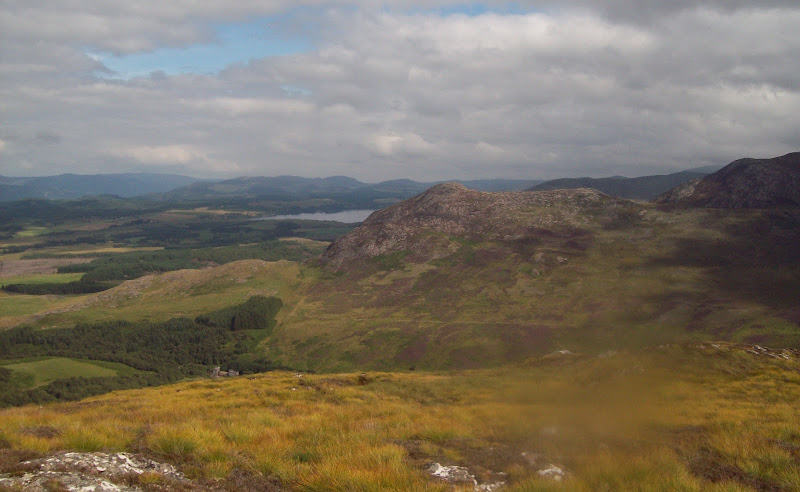 I had a seat next to the cairn, where the slightest breeze popped up, finally dispersing the helmet of flies that I'd worn on the way up. I had a good 15 minutes resting and looking at the view.

Beinn a Bhacaidh and the Affric hills: 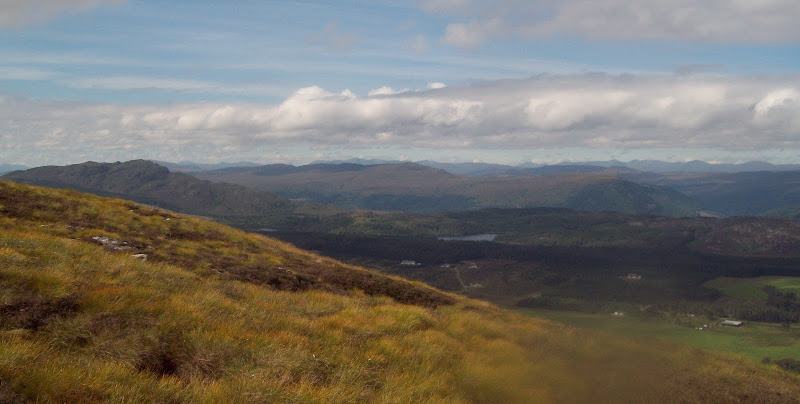 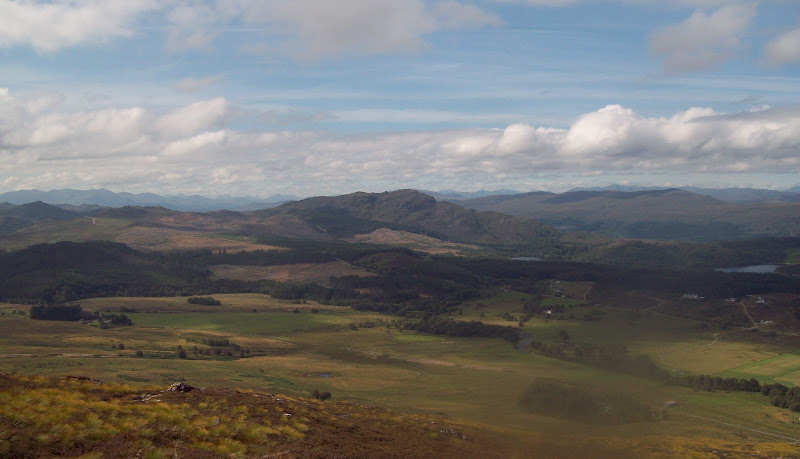 On the summit looking north: 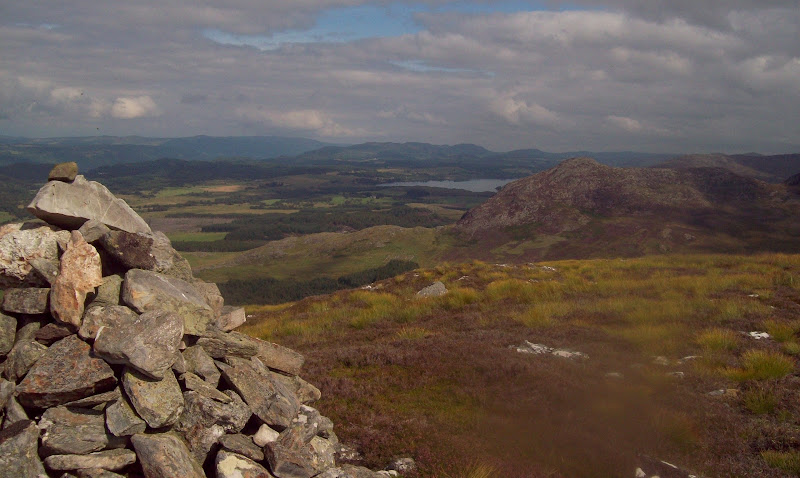 One of my favourite things about the strip of land on the south of Loch Ness is the fact that it is well inhabited. It gives the landscape a different feel to much of highland Scotland, and maybe some idea of how things might have been in some emptier parts of the country at one time. 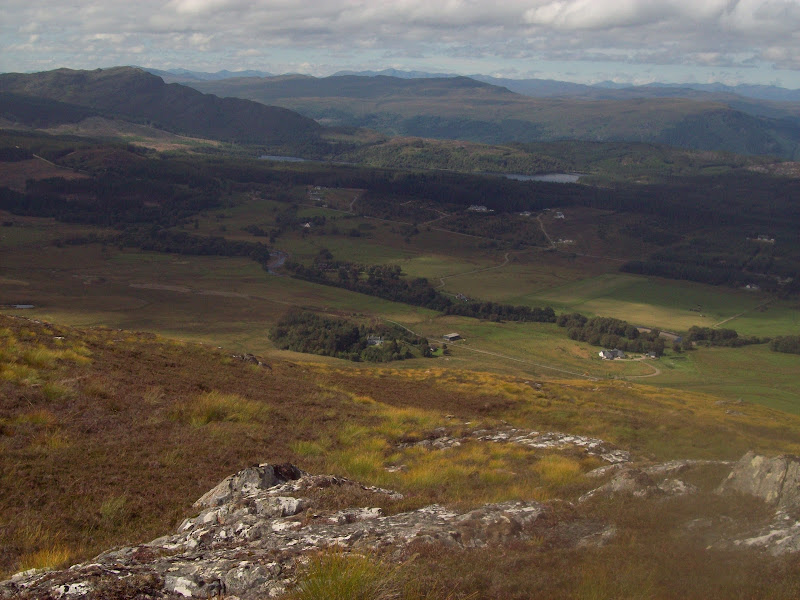 Even this close to Inverness, it was possible to see over to those emptier parts. I could make out Gulvain, Sgurr Thuilm and the edge of Knoydart from here even through the haze. 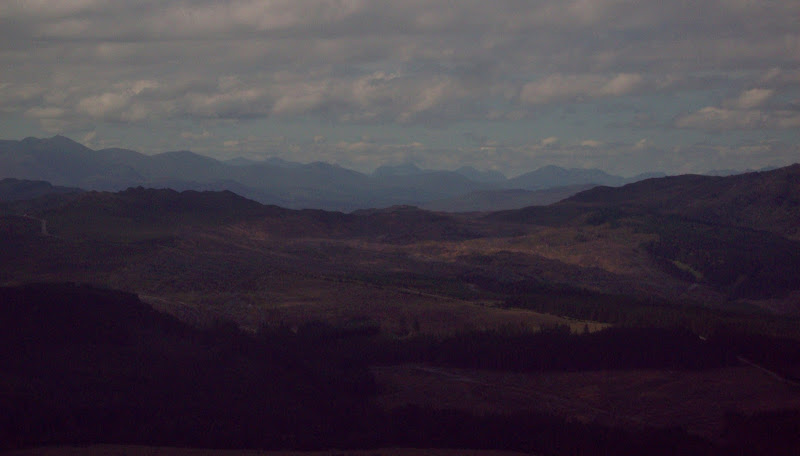 There was still a lot of cloud sitting on the Monadhliath. I had been looking at a longer route on this hill, exploring some of the unlisted bits of high plateau and dropping down to Loch Killin. One for the future. 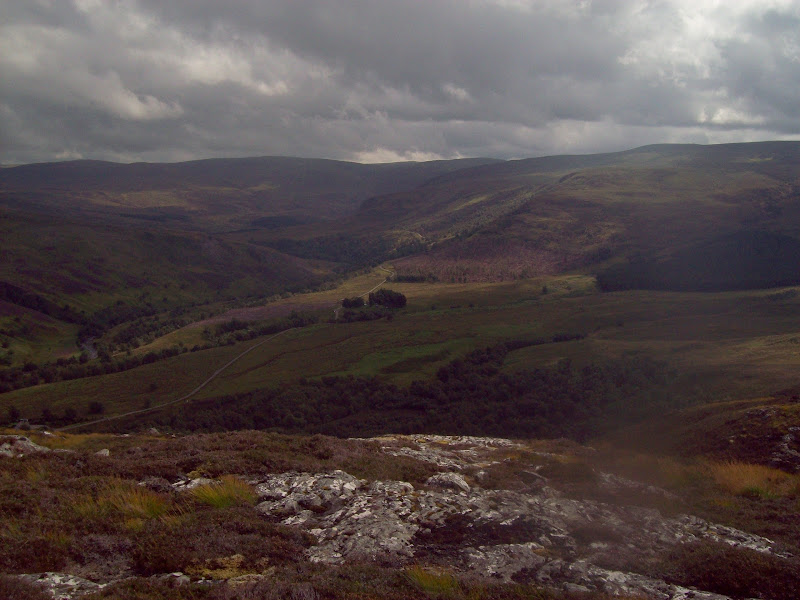 Beinn Mheadhoin and Carn Dubh - a good continuation from this summit maybe: 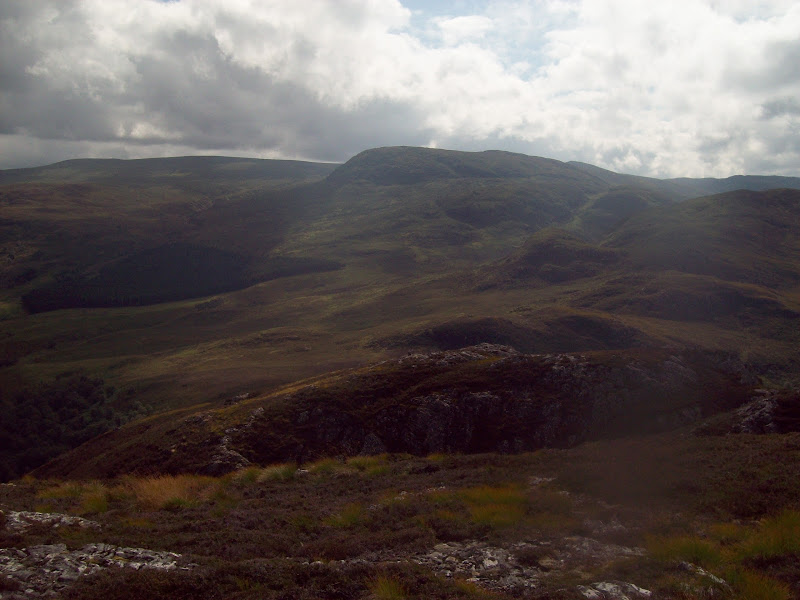 Then I took a quick stroll over to the southern cairn. It looked slightly lower, but it was hard to tell.

From one summit of Meall nan Tarsaid to another: 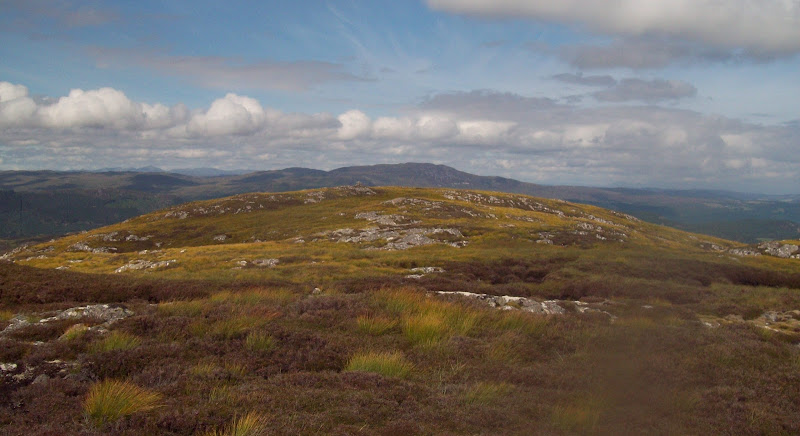 I found a slightly different route down, but it was just as steep and heathery. 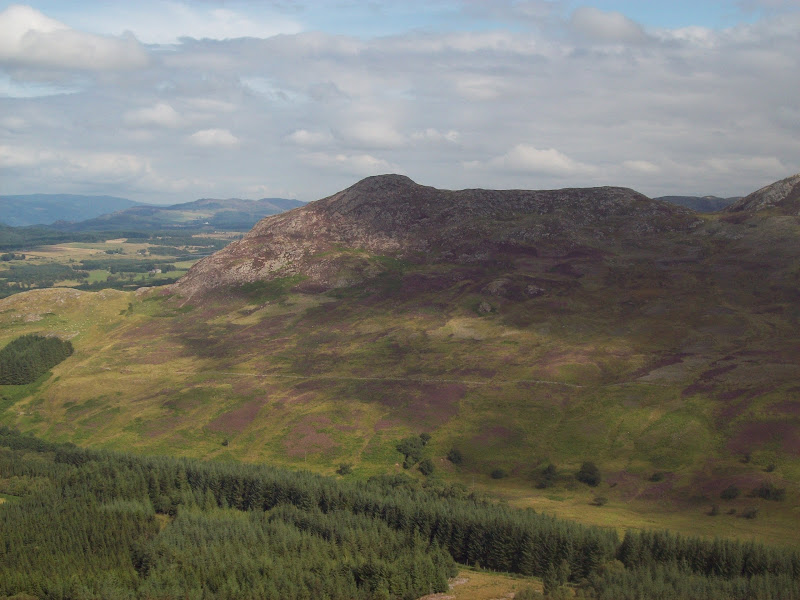 Then it was back on the bike for the long cycle home. Beinn Sgurrach looked particularly good from lower down, as did various other Monadliath outliers on the far side of Loch Mhor. 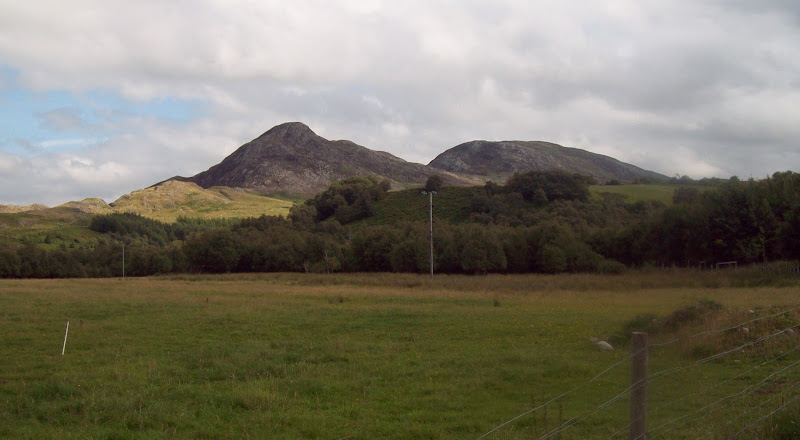 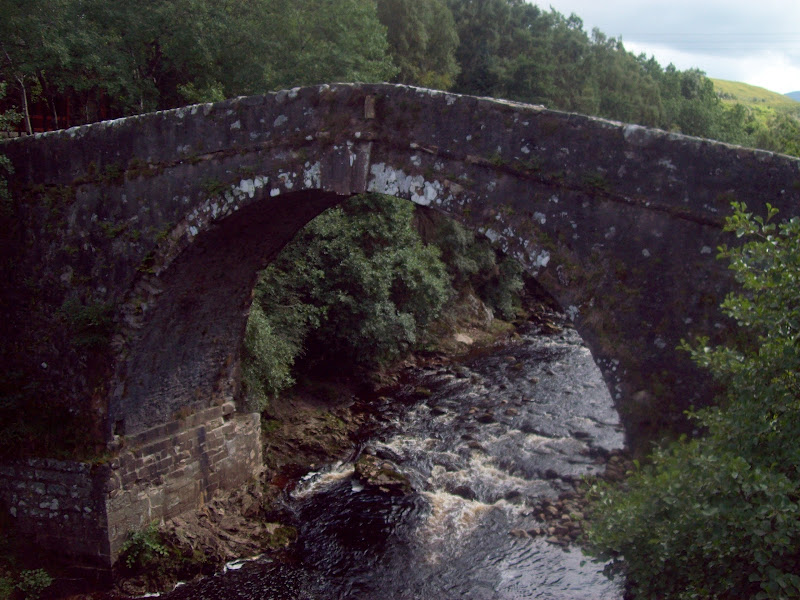 I took the Errogie/Strathnairn route home to vary things a bit. It was gently undulating, but didn't have any big climbs in it. 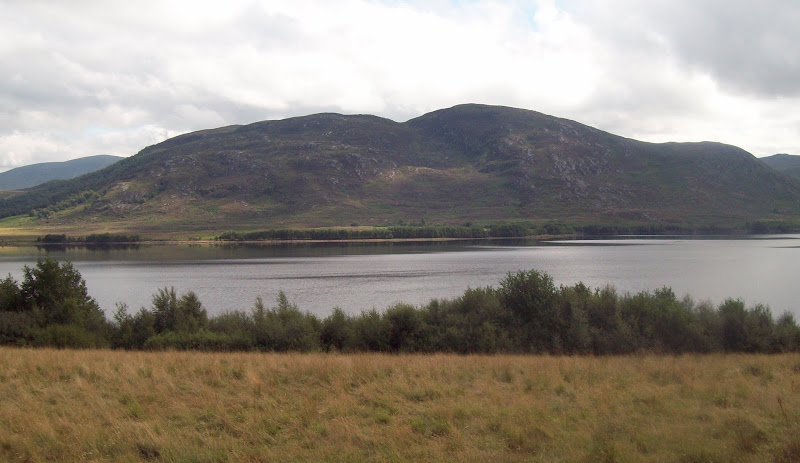 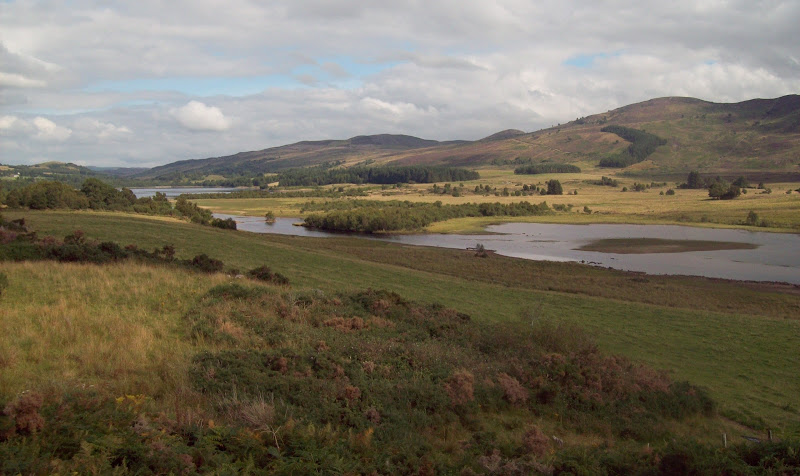 Cattle in the loch: 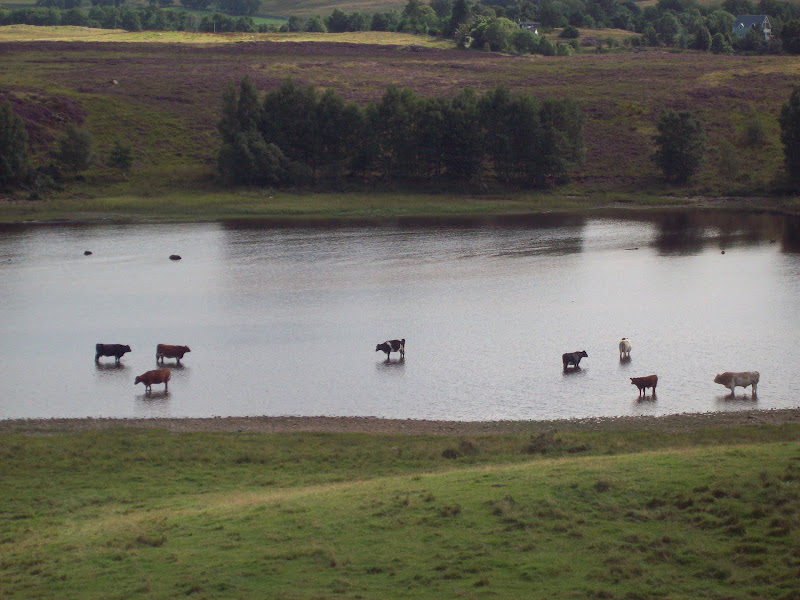 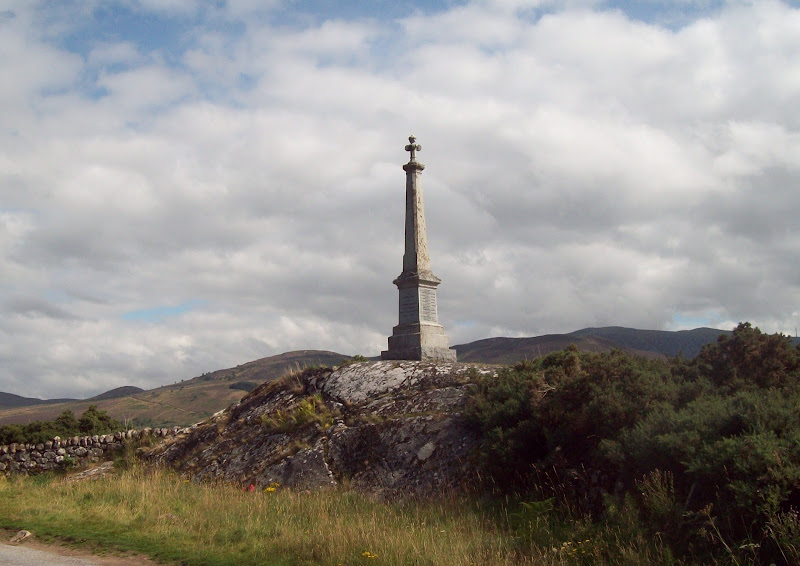 Still quite a few red phoneboxes left in the area. There was also an irresistable smell of wild raspberries for most of the route home. 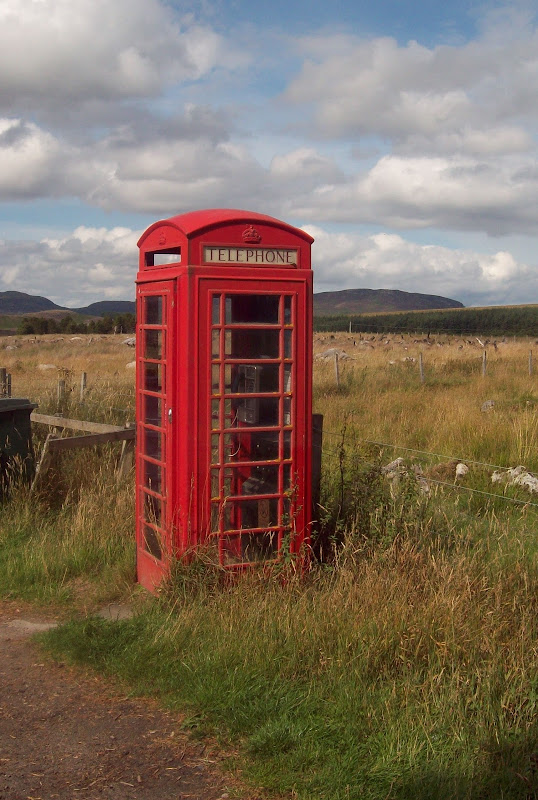 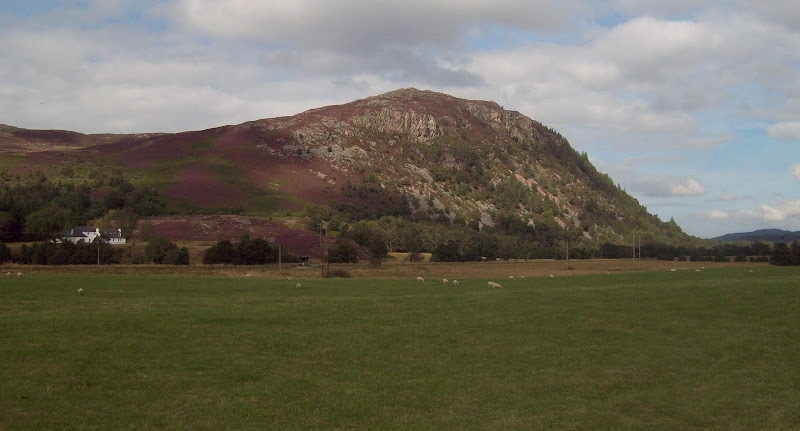 Eventually, at Nairnside, I gave in to the wild raspberry smell and stopped to collect some. Unfortunately they were mostly a little over-ripe and starting to go off. Rolled down the hill into Culloden shortly before 4pm for an afternoon of doing very little in the sun

.......and good to read about a bit of country I pass through frequently but never stop in , must sort that out one day.

You are right re populated, how it should have been and you know the Gaelic was still strong on the Bruach Nis not 50 years past a fascinating history Strath Errick !

Great stuff Malky, good to see some biking going on

I've stayed in those lovely white cottages in your 7th pic when me and MrsW visited the area for the Loch Ness Marathon in October 09....the Falls of Foyers was a bit wild that weekend!!! 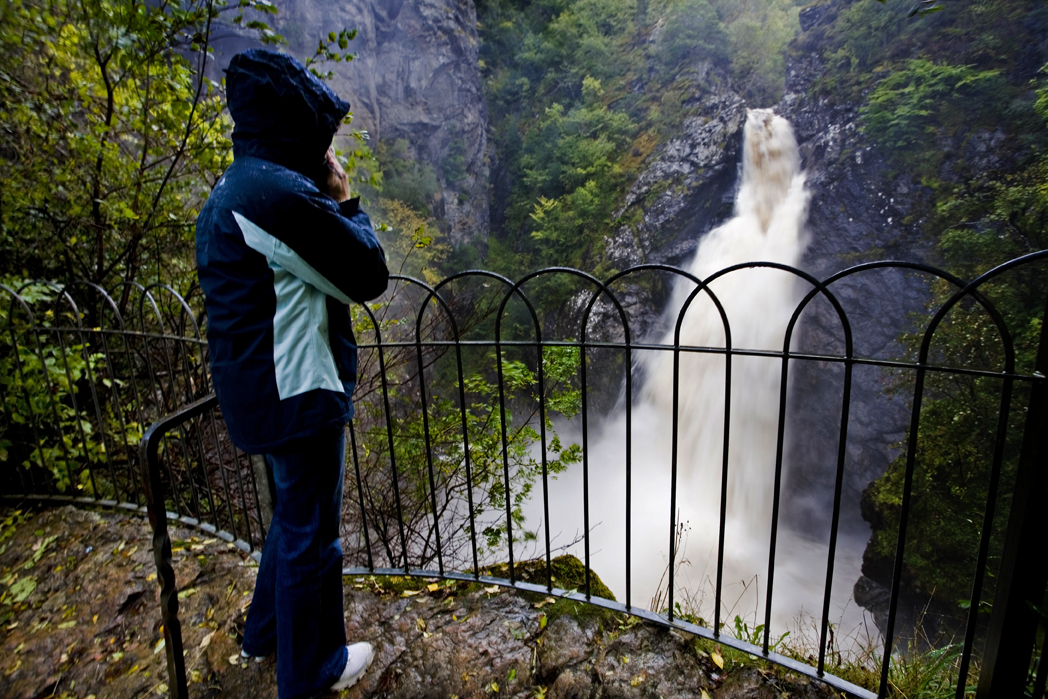 jings, malky - I do like a bike 'n hike but don't think I'd ever contemplate cycling so far - good result though in an area to which I think I've yet to venture - cheers