A hot summer’s walk along the trade routes around the high mountains at the head of Langdale.

bowfell.gpx Open full screen  NB: Walkhighlands is not responsible for the accuracy of gpx files in users posts
I’m not sure what time the crowds must set off, but I certainly wasn’t expecting to see no-one around the Old Dungeon Ghyll at 9.30 on a blazing bank holiday… and still not a soul all the way up the Band to the summit of Bowfell. This is steep, incredibly hot going in its early stages before it levels off on the approach to Three Tarns (all three intact at the moment) – great views all round, but very hard work. The Band, Bowfell to the right Great Langdale from the Band The final stages, on a decent route over rocky ground past the dramatic northern crags and then clambering up boulders to the summit, seem easier in the cooler air, but it’s still a peak that you reach with a feeling of some achievement. A clear way, cairned and obviously well-trodden, heads over Esk Pike and its striking western terraces and looping down to Angle Tarn, nestled in a hollow below Bowfell’s northern crags. Terrific views over to the Scafells and way into the distance to the north, and a real feeling throughout of being among the highest of mountains. Rossett Pike in front of High Raise & the Langdale Pikes 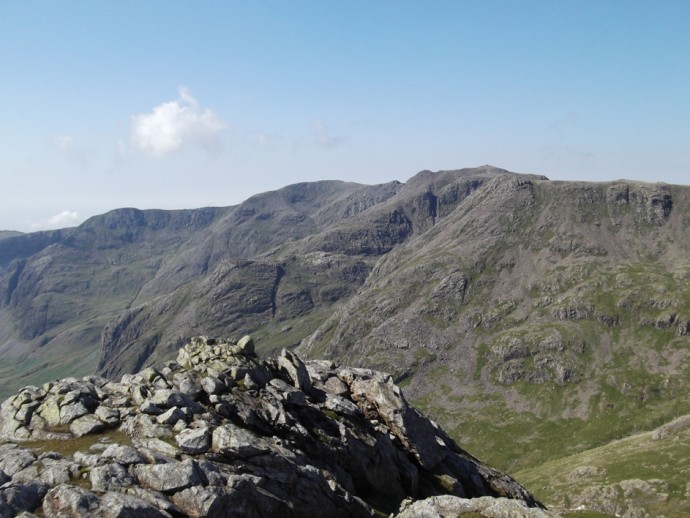 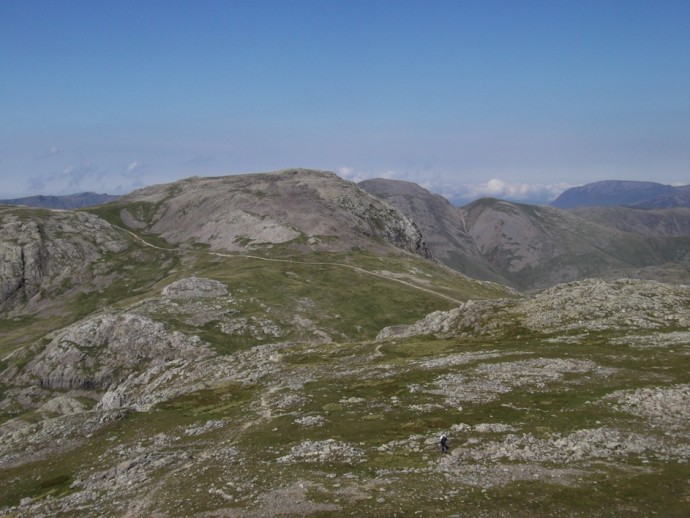 After a quick jaunt up to the quiet little spear of Rossett Pike, I had planned a circuitous route home via Stake Pass to avoid what I’d imagined to be a horrible descent of Rossett Gill. But the sight of dozens of people of all shapes, sizes and ages coming up that way with limbs and spirits apparently fully intact, and a distant view of the path changed my mind. And – whatever this route was once like – the path-repairers have done a great job on it now, the zigzags ‘paved’ throughout with indigenous-looking rocks into an easy gradient. None of the guides would have you believe that this was a better path than that up the Band – to Wainwright they were poles apart – but it definitely seems it now, and that and the flat miles through Mickleden make a pretty easy end to a day. This is a beauty P, and bloody hard work in the heat too

Fantastic photos throughout the hike with some real beauties but the one that sticks in my mind is the great slab, it looks so much like the 'great slab' I stood on last year that turned out not to be so great after all and toppled me down the mountain

I just read Foggies India TR before this, which makes yours look so lush and green its unbelievable

Love the Lakes, that looks some walk but beautiful scenery lovely blue skies

One of the best Lakes walks and fine weather too. Talking of a "lack of People" I did Scafell on Tuesday (Boot to Burnmoor Tarn and up West flank). From the summit I could see a continuous stream of people on Englands highest. I was on the summit of Scafell for an hour and a half and only 1 person came and went, I had it all to myself, just the way I like it. Same thing the next day on my Harter - Hardknott round. the only person I met was a guy on the summit of Harter Fell.

Cracking report Poppy and I've managed to talk to missus into doing this at some point in the next couple of weeks, weather permitting.

Having done the first part of The Band during a breathless, baking hot summers day and having to turn back (one of the twenty-somethings with me couldn't keep going) I can offer testament to how brutal that first ascent is, but I can't wait.

Fine fells and a great route, poppie. Walking in Lakeland has been hot work lately, but you can't complain with views like those.

Yet to do these three Poppy, certainly looking forward to it, looks a great outing.