From mouth of Welshman - Mamores more epic than Welsh peaks!

From mouth of Welshman - Mamores more epic than Welsh peaks!

Collected Rob and Mary at 6.05, Penny at 6.20 and we were on our way down a murky, misty Great Glen. Things perked up around Invergarry and the Nevis range looked stunning against a blue sky with a little fluffy cloud on top. Parked at the Grey Mare's car park and walked back along the road to the WHW which we followed through the woods, turning right along the road to Mamore Lodge. There were no gates to stop us parking there but it suited us not to return to the lodge so we were happy with what we'd done.

Bridge over the Allt Coire na Ba with open hill beyond 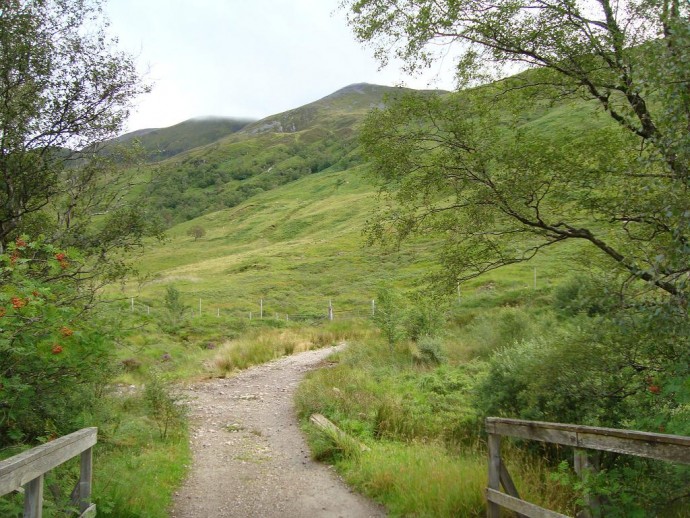 At the bridge we had a choice to make - follow the stalker's path leading up Coire na Ba on to the ridge NW of Na Gruagaichean, requiring a double back to reach it, or straight up the pathless hillside to get on to its south ridge. We went for the straight up option but because of a predicted deer fence veered north round the sheep pens before striking up and round said fence, which when we saw it was only waist high and no barrier to any self respecting deer, nor even non agile women of advancing years! So that was a somewhat wasted detour before we put out heads down to get up onto the ridge.

This was the least enjoyable part of the day - peching our way up steep grass and heather while enduring the worst midge attack of the year so far. I smeared all exposed skin with Skin so Soft but it didn't deter them - at one point I was inhaling them and had them in my eyes - although they did come to a sticky end on landing and my face and neck were soon black with midge corspes. Nice. 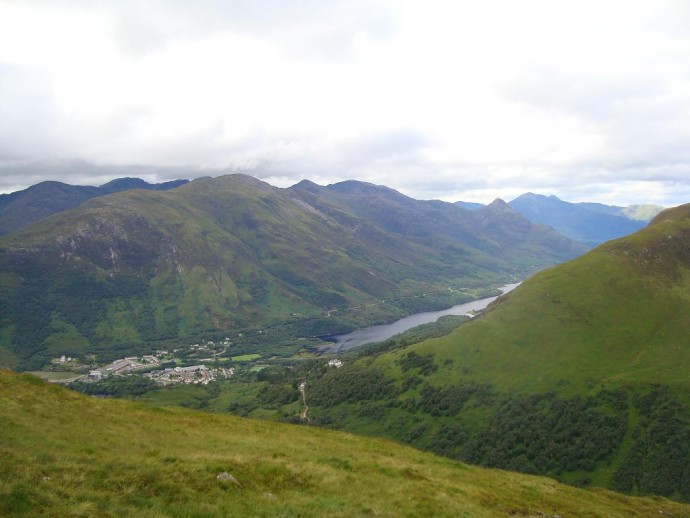 Part of the horse-shoe ridge we planned to walk 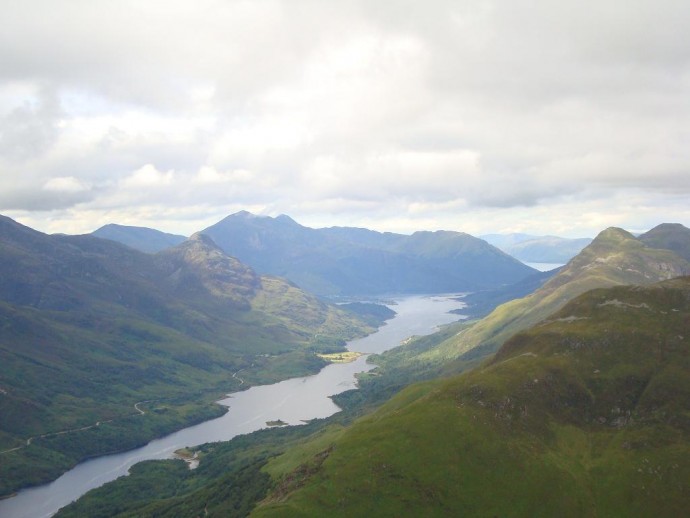 And views east of Loch Eildh Mor and Blackwater Reservoir 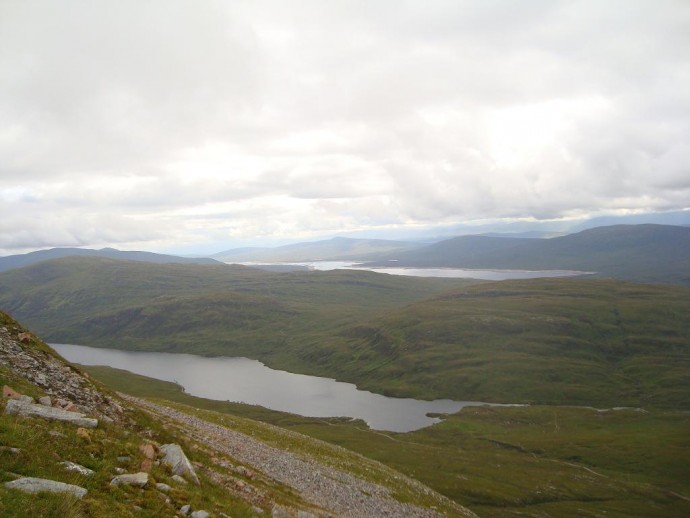 As we reached the south end of the ridge the terrain changed from grassy to rocky and cloud rolled in covering the top, but happily didn't hang around for too long. 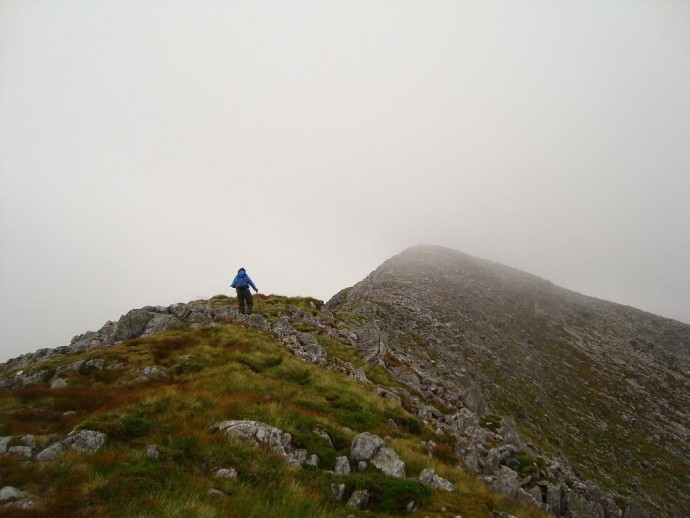 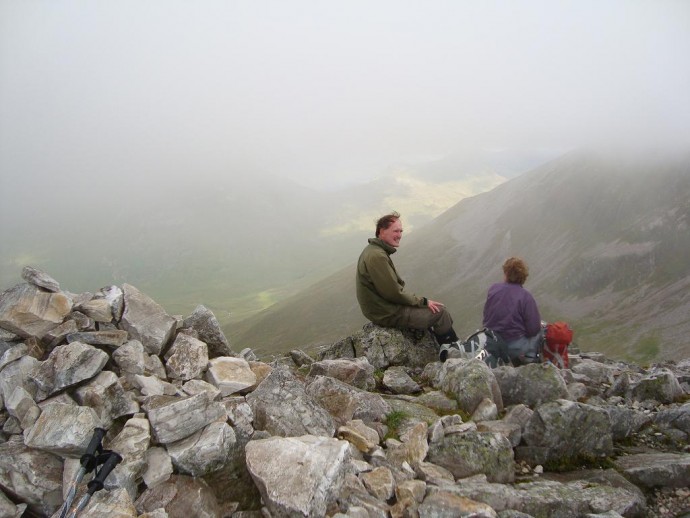 Three wifies atop "The Maidens" 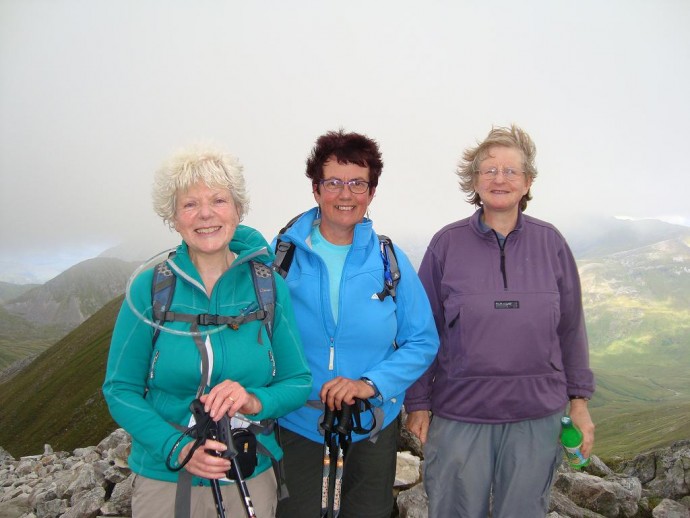 The next part of the route until we came off Am Bodach was most enjoyable. After a short steep descent into a narrow col there was a steep climb on to Na Gragaichean's NW top (1041m) then another steep descent. A stiff westerly breeze (which thankfully dealt with the midge problem) had us dropping down the east side a little for lunch and that's where we met a friendly Yorkshire lass heading for Binnein Mor. After a chat about the hills and what we were each doing she double-checked our maps for best route to her target and on she went. Then it was easy walking along the ridge to our second Munro, Stob Coire a' Chairn.

Am Bodach with Stob Ban behind on the right 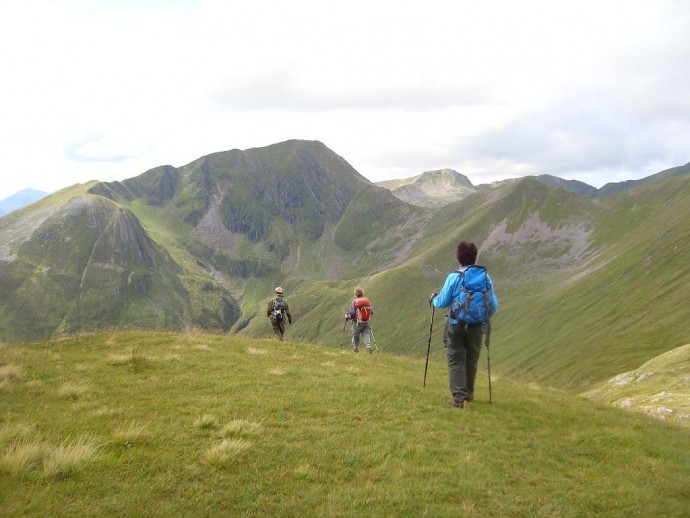 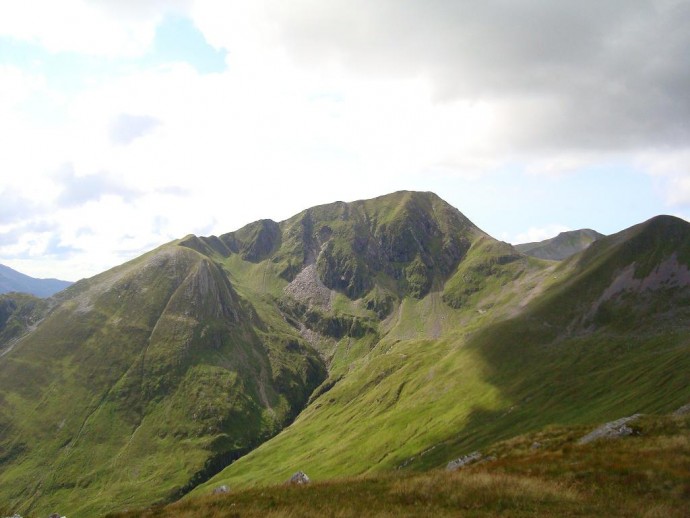 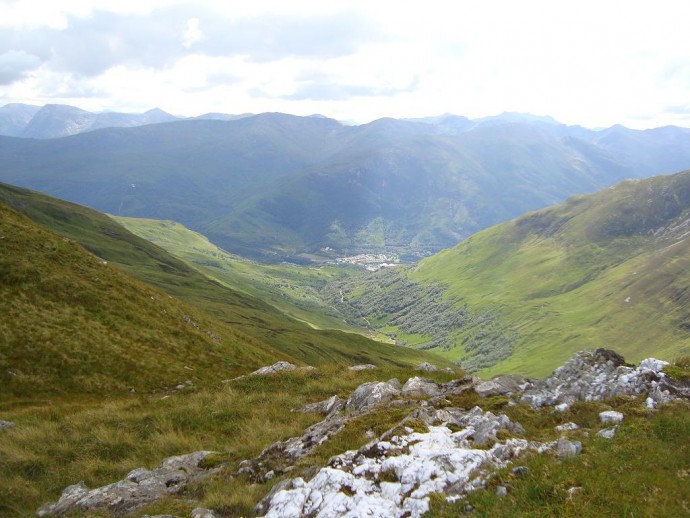 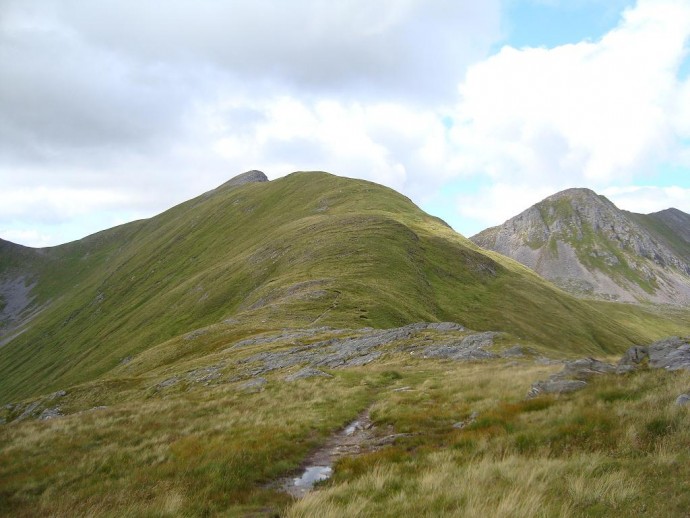 View back to twin tops of Na Gruagaichean 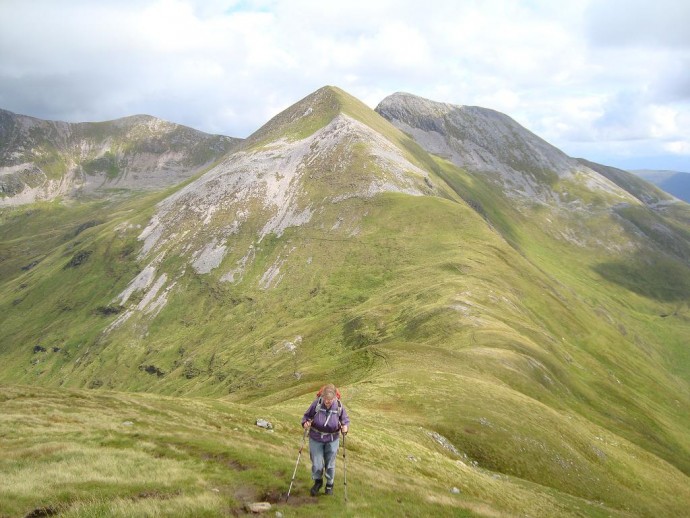 Stob Coire a' Chairn - "Peak of the Corrie of the Cairn" 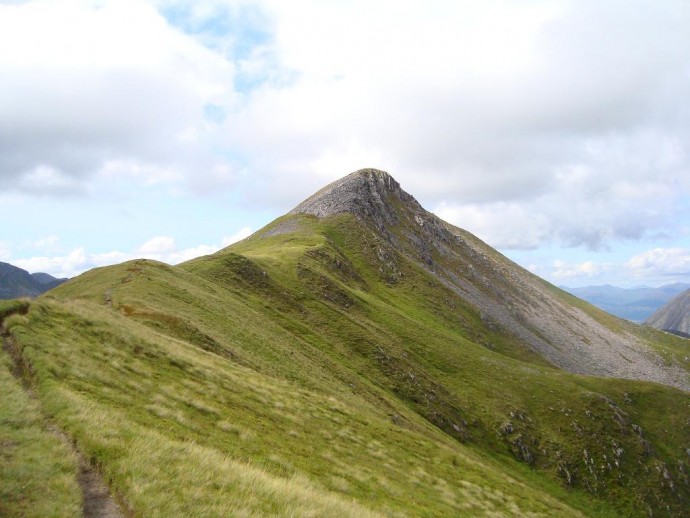 Ben Nevis framed by Stob Coire a' Chairn and An Garbhanach 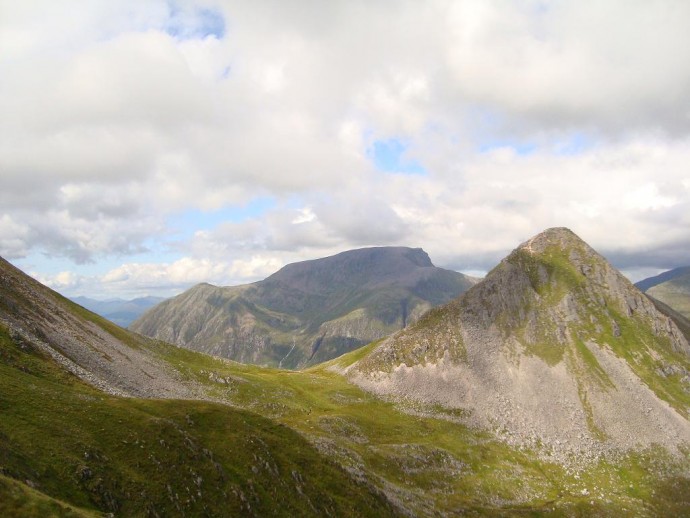 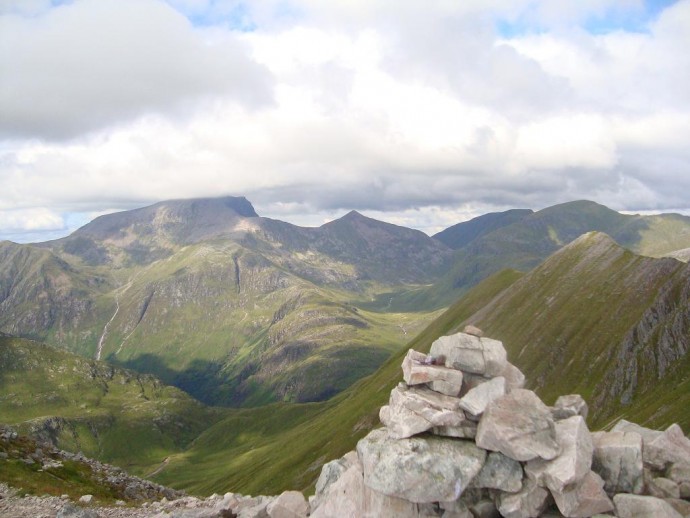 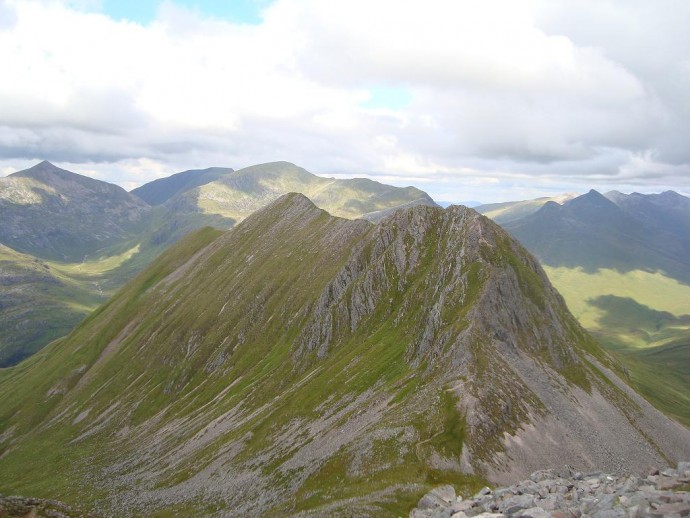 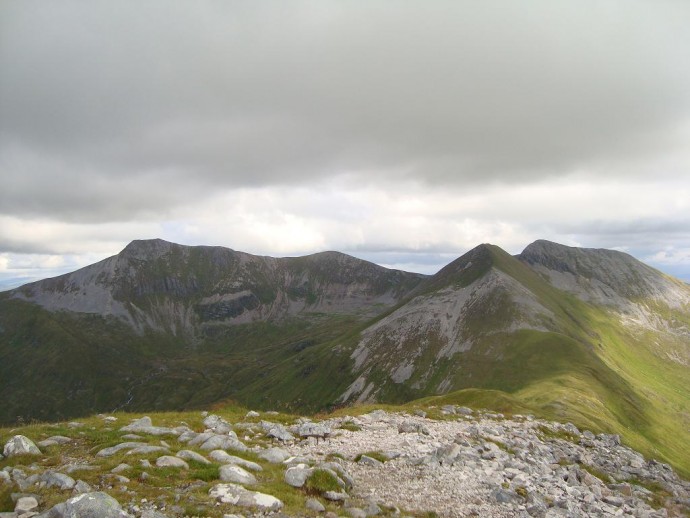 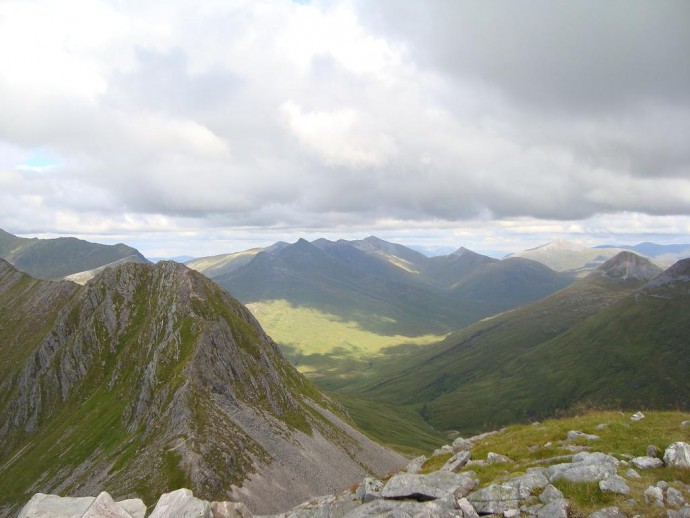 From SCC we followed what was now part of the Ring of Steall route over a bump towards the steep ascent of the NE side of Am Bodach. About half way up I stopped to put on another layer as it was decidedly cooler in the shade and dark clouds were gathering overhead. At that point two guys caught up and we got chatting. They'd driven up from Wales and had recently done the Welsh peaks challenge (which Penny had just done too) so I asked them how the Mamores compared to the Welsh 3000 footers. Without any hesitation the younger guy said "This is more epic" which as a Scot I took as a compliment and made me realise again how privileged we are to live in such a beautiful part of the UK.

The last part of the path up Am Bodach is steep and in places eroded enough to require some care and then we were at the top - two Welshmen, a Canadian, a South African, a Scot and an Englishwoman - the usual sort of mix! 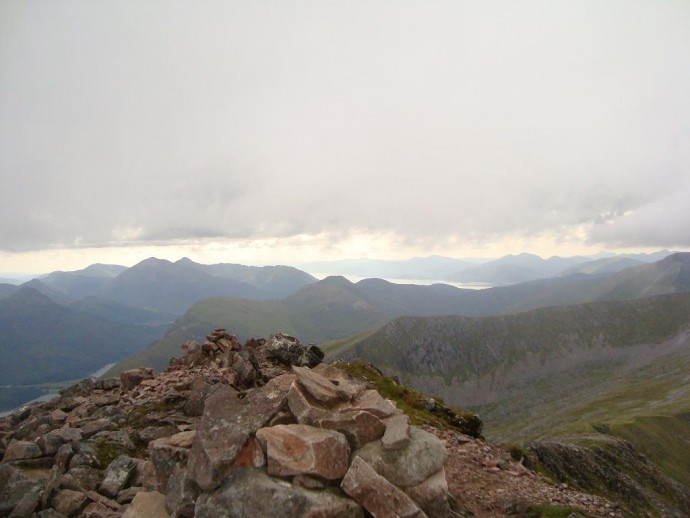 We walked over to the second summit for second lunch and had a discussion about how to finish the loop. We had two options. I had an outline of Donald Bennet's route which was down the SE ridge towards Sgorr an Fhuarain and then traversing easy grassy slopes down to the landrover track to Mamore Lodge and on to the WHW. Rob had a route which would take us off to the west and connect with a stalker's path running south to join the WHW. Out of deference to her knees Penny asked if we could take the less steep option so because the SE ridge looked less steep and was more direct we took that option - but in the end we did a combination of both those routes!

The SE ridge gave easy walking as far as the col before the minor top. Bennet advised starting the descent off the ridge before the col to follow a SW line below Sgorr an Fhuarain's west side to avoid its steep south face. But we were distracted by a couple ahead of us who turned right from the col, heading straight down to the west. This made us dither and we continued along the ridge to just below the top.

View west from Sgorr an Fhuarain under dark brooding skies So we headed down what looked like the beginnings of a path (the way of a thousand hooves?) which very quickly fizzled out.

Start of the descent off ridge 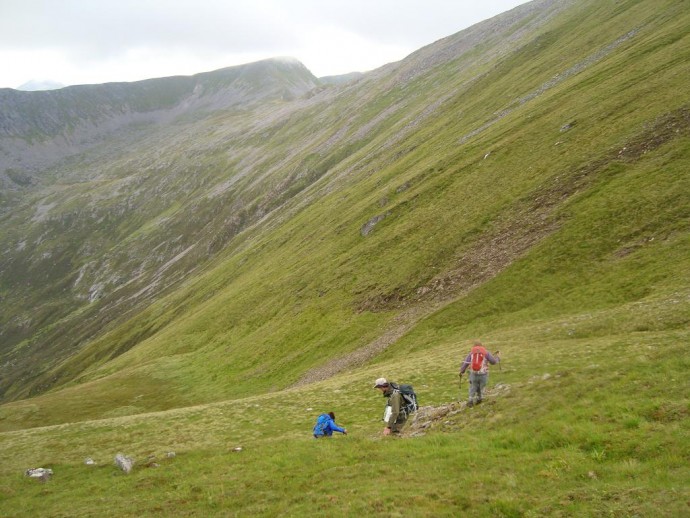 We walked down the grassy slopes in a generally westerly direction but Mary was concerned that on convex slopes we couldn't see what lay below so she found a grassy gully going down in the direction of the stalker's path we could see winding its way down below us. This became steeper and wetter as we descended (and I for one acquired a wet behind through a combination of slipping and bum-shuffling) but it did take us to the path which led us to the WHW and back through the woods to Kinlochleven.

It was a great day and the medal for endurance has to go to Rob for navigating us safely up and down and coping so patiently with three women who were slower walkers than him - but who were not always so slow to voice their opinion about the merits of the route we were taking!

Thanks for a detailed account and plenty of excellent photos to remind us of a great day on the hills. I had forgotten how dark the clouds became towards the end of the day. It stayed dry and brightened again I think. Route finding always involves some risk unless you are repeating a route which you remember well. I like to follow the map whether others are in charge or not. Next time the midges attack, try "Smidge". From what I remember of Snowdonia, there are plenty of challenges there as well as good views on good days. Here in the Highlands there is so much more to explore.

rockhopper wrote:Turned out to be not a bad day weatherwise - some good views in there

With those dark skies we did well not to be rained on and can't complain about the views either. Good excuse for you to go back if you got clag the last time

rockwalker wrote:Thanks for a detailed account and plenty of excellent photos to remind us of a great day on the hills. I had forgotten how dark the clouds became towards the end of the day. It stayed dry and brightened again I think. Route finding always involves some risk unless you are repeating a route which you remember well. I like to follow the map whether others are in charge or not. Next time the midges attack, try "Smidge". From what I remember of Snowdonia, there are plenty of challenges there as well as good views on good days. Here in the Highlands there is so much more to explore.

Thanks RW, will have to try Smidge - but hopefully the drop in temperature will do something to deplete the hungry hordes!

Midges are a scunner just now right enough and the Mam Mor is a grand wee range and I have had mixed views on her never saw anything Na Gruaigean so good to see what I mist ...ed

Another fine day on the hills for you

I second the Smidge recommendation.

On Skye just now and weather has dampened their ardour - every cloud, silver lining and all that!

Johnny Corbett wrote:Another fine day on the hills for you

Have to get some!