I have been looking forward to exploring the Tarmagan ridge for a while after viewing other people’s reports & photos on the forum as it looks great however after most of my Munro summits have been shrouded in mist/fog I wasn’t expecting much. I thought I would bag it for fitness reasons rather the than the views but luckily it turned out to be a glorious day.

After staying in the Killin Hotel down the road which was a great little place for the money, I set off at 9am and was surprised to see so many tracks in the snow starting up the hill. After noticing that the whole of the ridge was covered in what looked like deep snow I didn’t expect to get far without Ice axe and crampons. I still need to invest in some so was a bit disappointed starting off as I knew the chances of making the summit were slim.

I decided to just enjoy the fine weather and stunning views and head up as far as I could then turn round once things got hairy underfoot. However I was pleased to find plenty of well trodden foot holds that I could follow which meant I could handle being crampon-less. Well, at least to the summit of Meall Nan Tarmagan anyway!

So, up I continued without problems to the top. After finishing my acent I couldn’t believe the views. As mentioned I have only had the pleasure of a couple of peaks without cloud since starting to hike 5 months ago so this was a joy to witness. Needless to say I parked myself near the cairn for some lunch and coffee and stayed quite a while to savour the area as much as possible. I then safely decended after deciding that traversing the ridge would be too risky before my 6hr “traffic hell” torment of a drive back home.

My camera has never worked properly since I subjected it to -10c temps on Beinn Chabhair a few weeks back so I had to resort to the crappy phone camera which didn’t do the views justice so apologies for the poor quality pics. 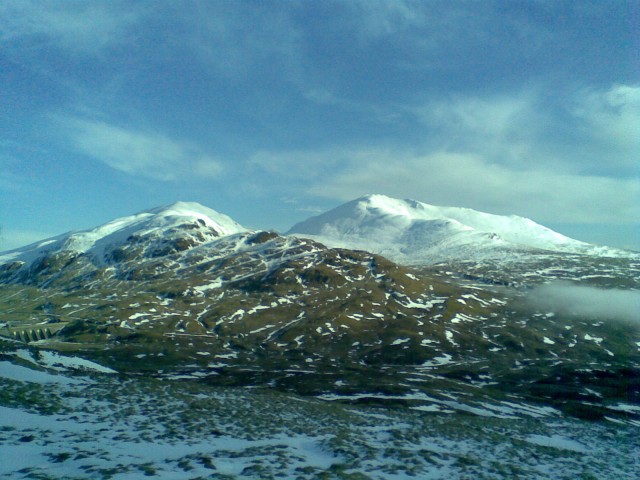 Hi there, I climbed Meall Corraniach and Meall a Choire Leith on the other side of Lochan na Lairige.

A bit colder and windy compared to Drumochter on Saturday.

It is the first time I have been up in that range and seen Meall nan Tarmachan. So took loads of pics! Meall a' Choire Leith from ridge Thanks for the pics kjudge6. really good shots. Great one of the hills in the distance over the dam!