It is nearly twenty years since i last visited the summit of Ingleborough it was on my Duke Of Edinburgh silver award 1991,it was also the second mountain that i had ever climbed,Pen y Ghent being the first the day previously.We were actually meant to climb Whernside as well that same day but being young and devious and somewhat lacking the necessary motivation by the time we had reached the bottom of it we decided upon an easier detour at valley level.
Unbeknown to us however our assessors were waiting at the summit trig on Whernside to make sure our map reading had gone to plan,which in truth it had to be said had gone exactly to plan, we were right where we wanted to be,making our way to the final checkpoint less 4 - 500 m of ascent.
Unfortunately however our very harsh assessors did not accept that we had passed over the top somewhere slightly lower down the summit area and that we had missed one another in the cloud that had enveloped the mountains upper reaches that day and they subsequently failed us.

Fast foward to 2010 and again i have omitted Whernside from my intended route although this time i was disappointed at having to do so,my route which shrank from 27km down to 15km was due in part to slightly thicker snow coverage than i had expected and a time consideration.

After a less than promising start at home which was experiencing rain and extensive cloud cover i was fearing the worst for the day, but travelling up the M6 the rain began to dissapate and some sunlight began to show itself in and out of the fog patches.The weather report for Yorkshire dales basically worked out as horrible and claggy in the morning ,with lots of sunshine in the afternoon.As it turned out the reversing of that forecast would have been more accurate.

I passed through Ingleton on my way to park to buy a map for the area,before carrying onto the Clapham road to park near to Cold Cotes.Start height for the walk was about 260m with only a dusting of snow underfoot,i made good progress upto the area of Boggarts roaring holes (had to include that name somewhere in the report)before the snow started to thicken up and the sweat started to trickle.Escaping from the valley the visibility improved with great views over towards Gragareth and Scales Moor. 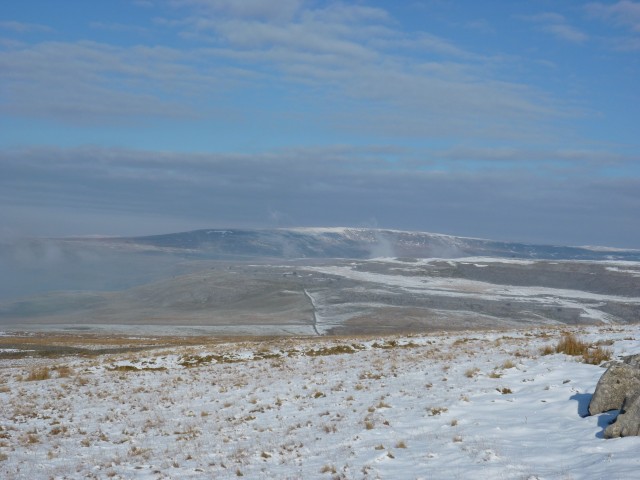 After 50 mins of graft i reached Little Ingleborough which opened up the view of the eastern dales beyond to Pen y Ghent and Fountains Fell and to the last push for the summit,after ploughing through some undisturbed snow for a few minutes i hit what felt like the path and made good time for the summit about a Kilometre away. Looking back toward Little Ingleborough The cloud was starting to overcast the day by the time i reached the top but was staying well above the summits.After a good feed and water at the shelter i was on my way to claim my outlying Hewitt, Simon Fell ,dropping off the NE shoulder there were some fabulous views of the Ribblehead viaduct and of the Limestone pavement more immeadiately below,and good views of Whernside across the valley i carried on and made my way carefully down to the saddle and stretched out towards my next objective passing a few other people heading back towards Ingleborough along the way.The top of Simon Fell gave up the best view of Pen y Ghent i stayed only long enough to get some quick photos before retracing my steps back toward Ingleborough. Reaching the saddle i turned and headed down the steep north slope towards the Limestone pavement, so steep was it in fact i seriously considered for a few minutes about breaking out the survival bag to sled down ,how grateful i was moments later as i felt all the large boulders beneath my feet that good sense had returned quickly,after a frantic five minutes of falling and sliding i reached the bottom of the slope with all limbs in tact and headed away for a short while on a good path before following a wall on my left hand side until i reached the limestone pavement and ventured onto it ,it was a little slippy with the snow coverage but seemed like playing a giant game of hopscotch crossing the gaps in it, sometimes quite large gaps. In the breaks between the stones i followed animal tracks in my direction of travel in the snow it seems they like to take the easiest line on the hill too,as i contoured with them round the side of Ingleborough. Ingleborough and the Limestone Pavement I eventually sidled upto the lonely tree after a good 40 mins of walking, sprouting up from the cracks in the limestone it looks like something out of a horror movie.Shortly after the tree the pavement ended and i descended a short but steep slope down to the main path near to Crina Bottom then turning and heading across fields towards Slatenber and the car taking in the last glimpses of Ingleborough along the way. Ingleborough.gpx Open full screen  NB: Walkhighlands is not responsible for the accuracy of gpx files in users posts

Great report. I really like the 'Ingleborough and the Limestone Pavement' photograph.

The Three Peaks is an amazing area, I love the approach to Ingleborough from Clapham passing Gaping Gill and over little Ingleborough. One of my favourite walks

Yeah its an amazing area full of very odd stuff, Gaping Gill being a good example of that.hoping to be back in the dales again next month.

Ah - my local keep-fit stomping grounds - not been up in that much snow yet though strangely... Ingleborough summit plateau was where I once froze the capillaries in my arms due to stomping up in a t-shirt in snow and an icy wind but mistakely thinking I was warm!

Limestone pavement in snow always worries me - I always wonder where the grikes are under all that smooth covering and exactly when I'm going to break my ankle!

Some nice photos there!

no frozen capillaries to speak of ,the grikes werent snowed over just a covering on the top of the stones,which were a little slippy here and there.
Your lucky to have that on your doorstep MC

Well I have our moors on my doorstep and that's like a smaller version of Dartmoor so that's great (see my recent posts for snowy pics up there) - the tors are great. But the 3 peaks area is only around 20 miles away so I go there quite a bit - usually on the train - less hassle than the road. May be going that way on Wed this week...

Lucky you,im going nowhere this week except work,although were out on strike next week so i might have a trip back up your way then.

Ive often fancied getting the train to the start of a walk but it seems like too many changes coming from liverpool to make it a viable alternative to the car for a day trip,i must try it for a overnighter though.

Wow - a strike? haven't heard of one of those for quite some time - what do you do?

Was up Penyghent today - was funny as we didn't take 'spikes' of any kind as there was no snow around here - when we got there it was pretty snowy and quite a bit of ice. Luckily we were going up the south ridge and that had mainly cleared so we just went carefully up and back that way!

I work on a military establishment,it turns out we wont be joining the aforementioned strike action after all, so no walkies for me next week.

Pen y ghent looked very snowed up last week.I opted for no spikes when i was up there the conditions were ok for it though.
Last edited by johnnyaztec on Fri Mar 05, 2010 1:00 am, edited 1 time in total.

I'm ex military... We could have done a lot more on Penyghent yesterday if we'd had spikes so I wish we'd at least taken our microspikes...

Was on Ingleborough today (Sat) couldn't see a damned thing. Just my luck to pick today after several decent days!! At least I got 11 miles worth of exercise, saw Gaping Gill again, and Checked out the easy bits of Long churn cave. I'll make it a summer trip next time!!