River Ayr Way in a day for charity

River Ayr Way in a day for charity


Hi All.
Been planning to complete this walk since April in aid of Teenage Cancer Trust and Cancer Research UK.
Plan was for Mrs P to drive me to Glenbuck at 0500 for a 0600 start

but me being me I set the alarm wrong

, so new plan Mrs P gets me to a misty and rainy Glenbuck at 0700 instead 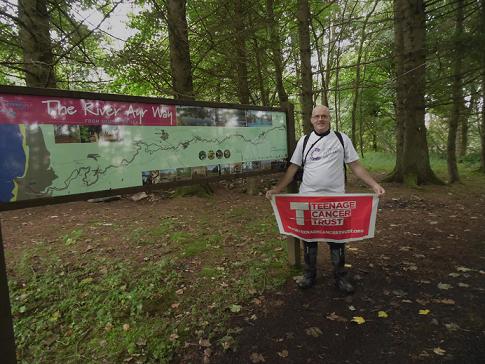 After getting myself ready and a few photos taken 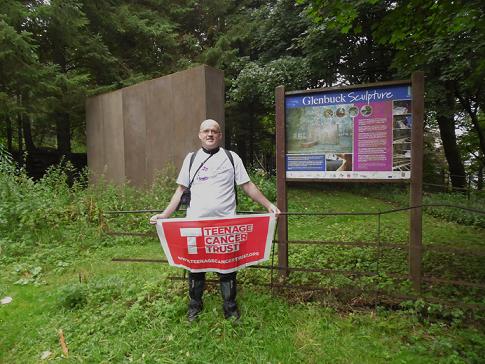 and set off down the road passing the Shankly memorial with a nod. 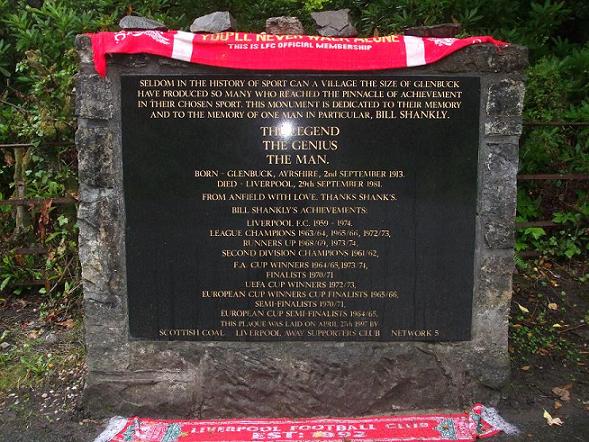 (stupid wee drizzly rain).
Not much to say about the route between Glenbuck and Muirkirk. 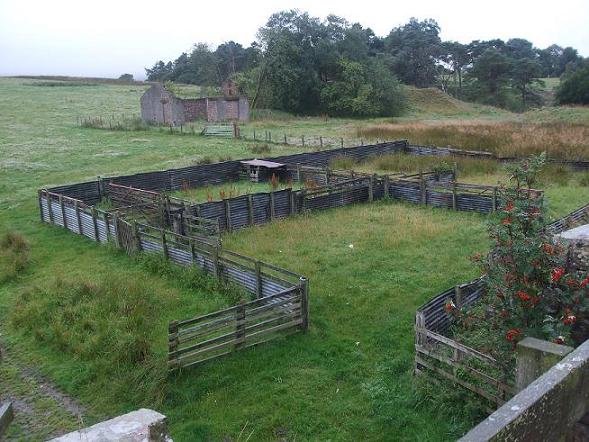 Generally a well maintained path although it got a little overgrown on the approaches to Crossflat and I did encounter quite a few sheep darting along in front of me.
After heading up the road towards Auldhouseburn Farm rejoined the old rail line via the kissing gate to the left of the large silver gate. Some construction work going on further along the path (not too much disruption on the path though).
Reached the houses behind Kames race track and took the path to the left of the houses that takes you round behind them. 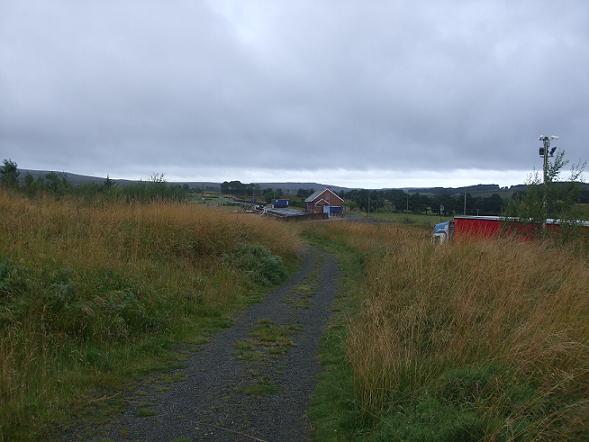 Stopped here to take waterproofs off (Mountain Warehouse packaways, only gripe with these is they not only stop the water going in but also stop water getting out).
Joined the farm track at the end of this path and headed up the hill until I reached the path, next to the site of McAdams tar plant, that takes you to Tibbys brig. 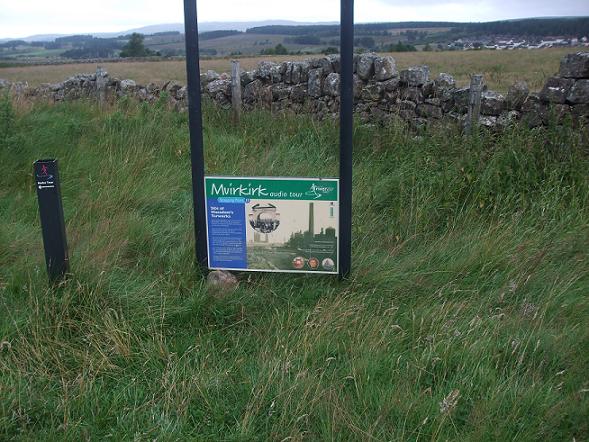 Take care as the path has deteriorated on the hill down to the bridge. 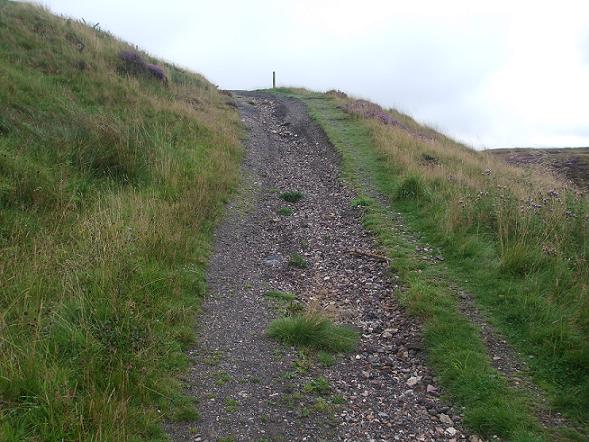 Crossed the bridge and headed round the path to rejoin the old rail line, (Again here this path has deteriorated on the approaches to the steps).
This stretch of the route is nice and flat. On reaching the signpost headed up through the gate and headed down the track to the next kissing gate (had to lift this gate to open it). Headed down the hill and went through the gate (still had the arrow from the challenge attached) to head towards the martyrs grave. Caught a glimpse of the grave through the trees on the right of the path. Took the path up and into the little wooded area above the grave and continued down to the riverbank (some parts of this path are a bit boggy). Continued along the path towards Wellwood Bridge and went through the gate and left up the hill, again encountering sheep who seemed a bit perturbed that I was there. Followed the path up and round(could just make out the path) alongside the opencast (what a waste of a hill). Now it was time to play frogger crossing the race track that is the A70. Made it intact and followed the path down to the road and over Laigh Wellwood Bridge and through the gate on the left.
Take care as after about 100yds the path has collapsed slightly into the river. 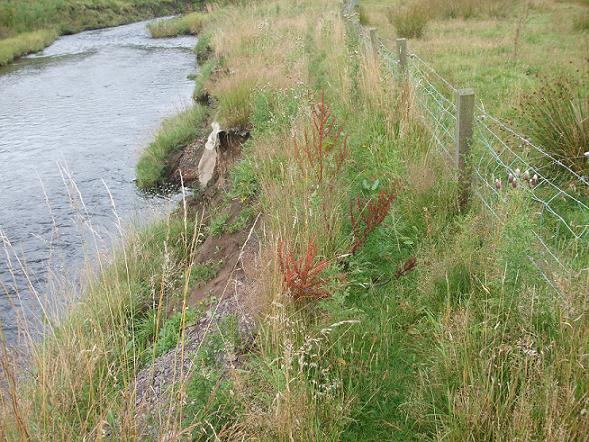 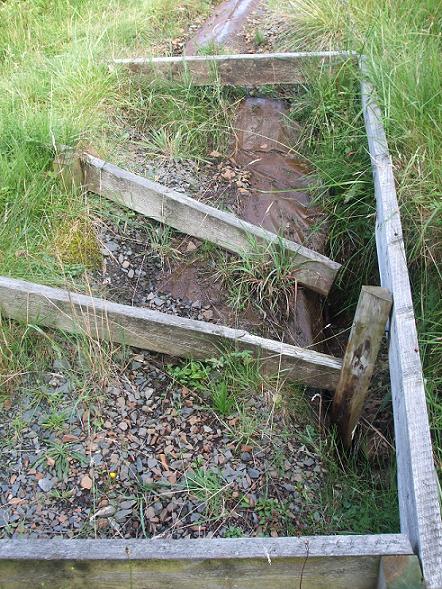 Took a minute here to look back from whenst I came. 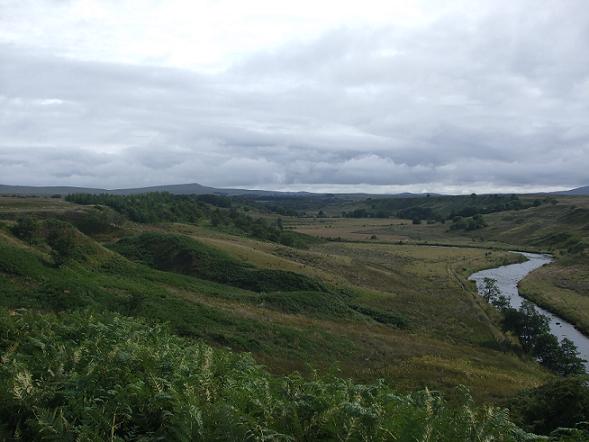 Heading down into the valley proper the wind died down and the smell of the woodland entered my senses. Tried to keep a decent pace along here but slowed slightly due to the steepness of the path. Reached the wooden walkway and with trepidation continued on (looked a bit rickity to start with). Headed through the valley and came out into Sorn. Had a few curious looks here as I had a Teenage Cancer Trust banner across my midrif

. Got through Sorn quickly as I don't like walking on tarmac too long. Exited Sorn via the old bridge opposite the church then took a right up the hill and thankfully joined the woodland path.
Arrived at the weir at Catrine quicker than I thought. 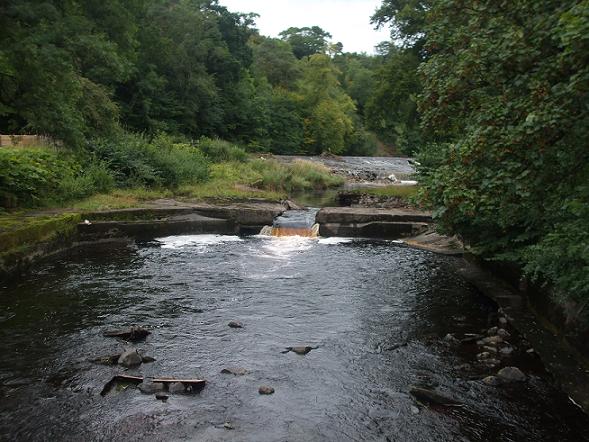 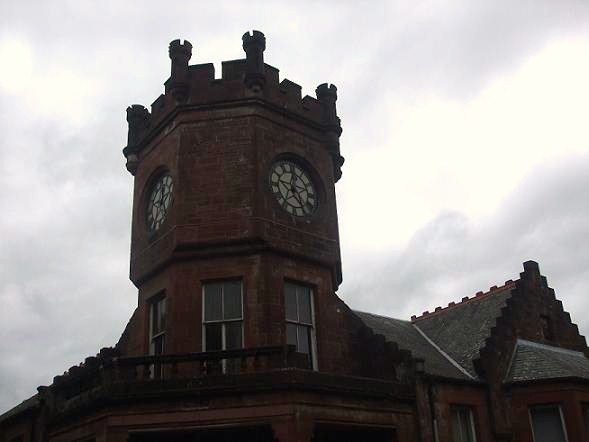 Turned right along the road and joined the path along the riverbank. Followed the path up more steps (knees starting to feel these) and reached the fork in the path at the A76 and headed down under the bridge.Crossed the old bridge and headed uphill and took the path on the right down through the field and into the woodland. Found this section going under the viaduct difficult to navigate through as it was very overgrown.
Reached Haugh farm and went through the farmyard and headed up the road.(This was confusing as there was no indication which way to go). Got to the junction about a mile up the road and headed left. Got to the road end and came across two confused female walkers trying to workout which way to turn as again no direction signs. (I kindly pointed them in the right direction).
Went left up the hill trying not to get knocked down by speeding drivers

and went right through a very stiff gate and joined the safety of the footpath. Passed the quarry originally planning to take a picture but the trees scuppered me.

Went through Kipplemoss Plantation and headed up the hill towards the B743 into Failford.This part I really don't like as you have to negotiate a few blind bends on quite a busy road. 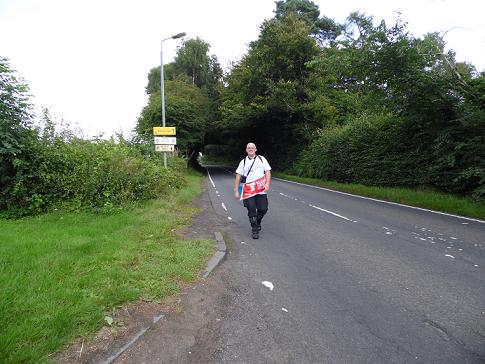 Safely reached Failford and was met with a round of applause from Mrs P and little A.P

Refilled my backpack with supplies and took off my gaiters (Mountain Warehouse and like the waterproofs stopped water going both ways)and changed my socks, quick look at the feet and sure enough a couple of big blisters forming

.
Another few photos and then off I went again 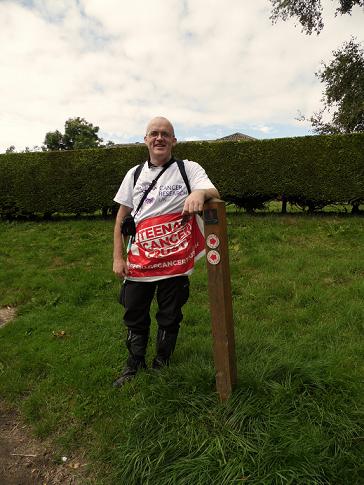 Entered Ayr Gorge via the path on the left just a short distance up the hill from Failford Inn. It always amazes me how quickly the traffic noise dissipates when you enter the gorge. My only difficulty with this part was the hills being steep and the steps being quite big on the way down my left knee was starting to get quite painful. After leaving the gorge the path got a little overgrown again. Got to the diversion at Daldorch farm and decided just to risk going through Wellflat Bank. Regretted this decision as it just caused more discomfort on my knees scrabbling over the landslide. Finally reached the road and turned right and headed carefully up the hill and joined the footpath. Contemplated going left and crossing the bridge for some refreshment

at Stair Inn but remembered what I was doing

After reaching the river again the going got tough again as the path was very overgrown on the approaches to Enterkine House. 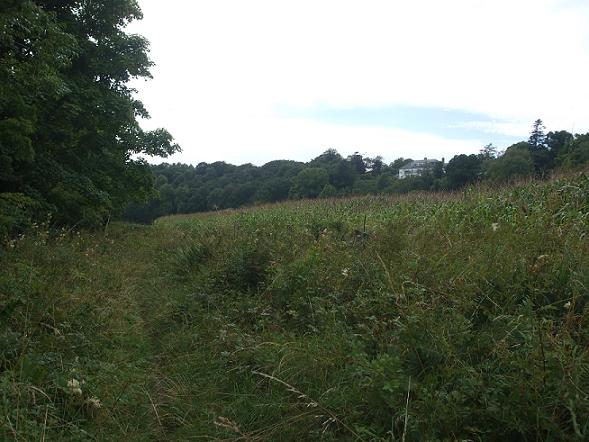 Heard a few toasts being called when passing the house,some happy couple and their guests slowly getting steamin (not jealous at all

)
Exited the woods (take care here as a tree has fallen across the path) and cought sight of the viaduct. Was getting a little annoyed as there was a jumbo flying about (obviously pilot training).Took extra care crossing the wooden walkway on the approach to Gadgirth bridge as the planks don't feel secure underfoot anymore.
Path upto Annbank a bit tricky as some parts have subsided making it that I had to scrabble to get uphill (starting to tire quite a bit now).
Headed through Annbank and went down Mill Road and again joined the river (nearly ended up in the river at the rocky part not concentrating where I was putting my feet

) Crossed the bridge and took the path to the left of the bridge. This path appeared not to being getting used much as I could hardly see the path through the undergrowth.
Battled on through and reached the gravel path. Found out why the start of the path was so overgrown, the path was partly washed away and a few trees had fallen across the path. Got to the top of the hill and found that a fence had been put up to stop anybody going down the path, maybe should've put signs up at the Annbank side of the path

This part of the route was hard as most of it was on tarmac that seemed to go on forever.
Finally reached the SSPCA building and then joined the path along the A77 and crossed the bridge. Decided to take the stairs down to go under the road and instantly regretted it as my left knee nearly gave way. Gingerly took the path behind Kyle Academy to ease the pain in my knee.
Walking along this path I almost forgot I was now in Ayr as it was so quiet and peaceful. Reached and crossed the bridge to Craigie and walk pasted the new Uni buildings, using the grass as the gravel was a bit painful to walk on. Passed the Fire station and got a boost of adrenaline as I could now see my goal. 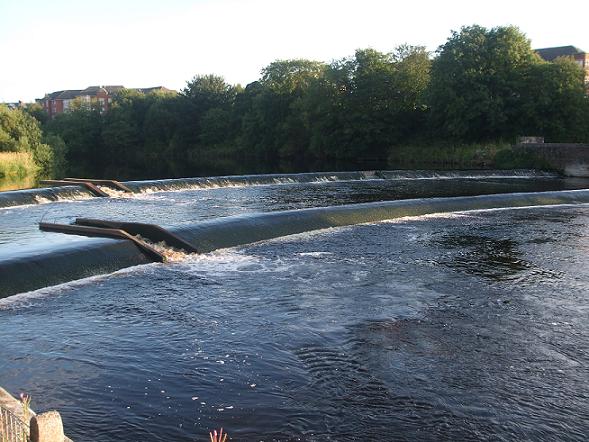 Crossed the old bridge and turned right onto High street reached the junction with Sandgate and crossed over and headed down Harbour Street. Walked round the back of The Citadel and headed for the shorefront. Here Mrs P, AP and even big DP were waiting for me to walk the final push to the end of the pier. Surprised as big sis AMP was there to join us.
Touched the edge of the pier point and took a big deep breath and turned to a round of applause

and a few whoops. 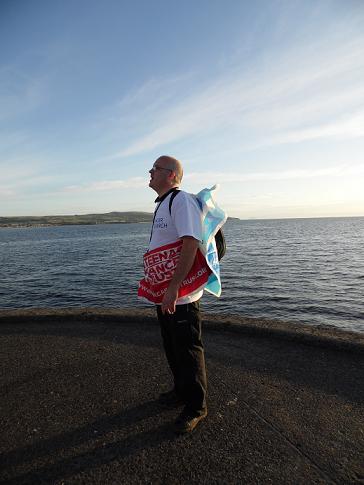 Big sis appeared with two bottles of refreshing Stella Cidre which disapeared quickly.
Now had the task of getting down the stairs (only three steps but they felt like mountains) and headed to the statue for a few photos (more ruddy steps). 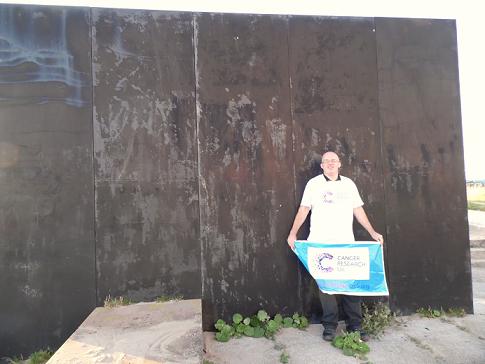 Well it was back to the car and headed to the chippy for a well deserved fish supper.
So total distance according to my Endomundo tracker was 44.03 miles with a time of 12 hours and 23 minutes

Well hope you enjoyed my report and if you want to donate to two worthwhile charities visit my other post on the general discussions board.
Thanks for reading and I may take suggestions of what challenge to take on next