Most sane and sensible people use bicycles for this long route so it was no real surprise to find Pigeon and myself setting off at 6 in the morning from Linn of Dee on foot . One small outbreak of common sense meant that we were wearing trainers for the track section with boots tucked away for the hills and bogs later on . 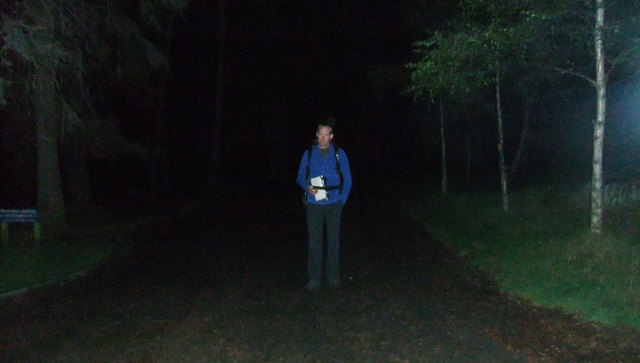 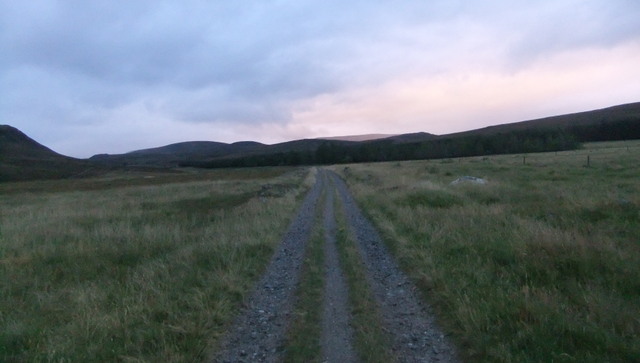 It had been fairly wild overnight but by dawn the wind had dropped a bit although there were still plenty of heavy showers as we made our way along to White Bridge and then to the ruin at the meeting point of Bynack and Geldie Burn . We had read warnings of a couple of awkward river crossings but thankfully the Allt Dhaidh Mor and the Geldie Burn were low and a bit of a hop skip and jump saw us across both of them . The trainers were definitely a good idea ,making the 12km to Geldie lodge fairly easy going and pain free . We had a bite to eat and changed into boots for the next stage which was basically upwards into the rain , cloud and wind . Onwards across the moor

A fine stalkers path led across the moor before we cut off to head for An Sgarsoch, hacking through long heather and bog before we gained some height and the going got a bit easier underfoot . Not happy , rain and wind . This was a bit of a slog but eventually we arrived at the summit , stopped for about two minutes then sped off westwards to try to get a bit of shelter . Things then got a whole lot cheerier when the cloud started to break and we could see the route ahead and even some blue sky above . Across to Carn an Fhidhleir

By the time we had crossed the bealach and started up Carn an Fhidhleir the sun was out and a pleasant stroll brought us to the summit with fine views all around . Pigeon on his final Cairngorm Hmm , that's actually quite a long way back !

The wind was still biting so a wee outcrop was found for shelter and a grand picnic of doughnuts ,vegetable samosas and pain au chocolat was consumed before we headed down to pick up the end of the stalkers path . On the path back to the lodge

Back at Geldie Lodge boots were swapped for trainers again and we set off on the long road home , stopping to give some left over goodies to a very friendly pony . About halfway back we were caught by a heavy shower so waterproofs on and heads down , thankfully by the time we reached White Bridge the sun was out again and it was a pleasant walk to Linn of Dee , meeting the first couple of folk we had seen all day . Linn of Dee getting closer Looking back , the two Munros in the distance

A great long walk this , even on a blustery day like we had . I think we were both amazed at how good our feet felt after wearing trainers for most of this , definitely the way to go if you can’t ride a bicycle! Used the bike when I done these, good idea bringing trainers if your not cycling in. Least ye got a few views for the effort.

We felt so sorry for that Horse when we passed that way a year ago...why would it be kept so far away from civilisation? it seemed delighted to see us when we approached!!! I am sure every walker that passes by feeds it with lots of treats though!

smudger71 wrote:We felt so sorry for that Horse when we passed that way a year ago...why would it be kept so far away from civilisation? it seemed delighted to see us when we approached!!! I am sure every walker that passes by feeds it with lots of treats though!

That was my thought as well when i passed it last month although on my way out there was a Landrover there with it getting tended to. Good effort guys walking that track. Just out of interest how long was the walk in to the Lodge?

RTC wrote:It used to be possible to do these hills by driving up Glen Tilt to Forest Lodge from Blair Athol. I think it cost £2 which was left in an honesty box at the castle. Must try it from Linn of Dee some day by your route.

Yes , lots of nice but long routes to these hills . I must go exploring in Glen Tilt a bit more , Marble Lodge is as far as I've been .

Tomsie wrote:Used the bike when I done these, good idea bringing trainers if your not cycling in. Least ye got a few views for the effort.

Cheers Tomsie , It would have been a long miserable day if the rain had stayed for the duration

smudger71 wrote:We felt so sorry for that Horse when we passed that way a year ago...why would it be kept so far away from civilisation? it seemed delighted to see us when we approached!!! I am sure every walker that passes by feeds it with lots of treats though!

He is in a lonely spot , maybe he's just kept there for the stalking season or something ? I'm sure he gets lots of attention and goodies from walkers , definitely the friendliest horse I've ever met

Cheers for that and very interesting timings as i was 1 hour in and 35mins out on my bike. The track appears to be reasonably level but i put my times down to the wind. Maybe yours was weary legs

Johnny ,Gav would have been quicker on the way back if he hadn't kept waiting for me

Well done the pair of you, great effort

Me. I'm going to ask Santa for one

Aye , the two of them are nearly there now

Well done the pair of you, great effort

Cheers Bod , you'll like this walk when you get around to it . Bring extra food for the wee horse

A long way for heathery lumps I thought

Ouch that's a big day out. The samosas sounded good though.

A long way for heathery lumps I thought

Yes , no place to go if you're looking for excitement , lovely and peaceful though

Morecambe Monkey wrote:Ouch that's a big day out. The samosas sounded good though.

The high point of the day so they were