I drove round from Sail Mhor hostel to the walkers car park at Inverlael to start this one. I wanted a decent walk to test my knee a bit after surgery and recently I'd been sticking to shorter days. How would this go? I'd been up the track a few times previously but it never looks any shorter when one first sees Iorguill and Beinn Dearg away up Gleann na Sguaib. I noticed that there were new signs directing the walkers to Beinn Dearg - not sure how I feel about this! The track, though, is good and it climbs very gradually so I was able to maintain a reasonable pace but after a good while the col still seemed a good distance away. 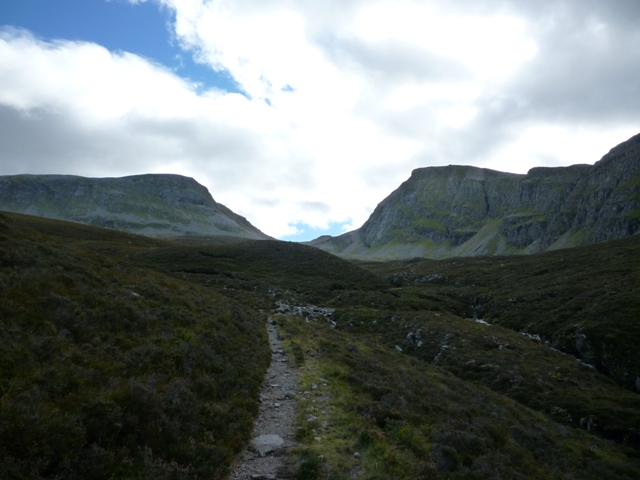 Once across the the upper reaches of the River Lael and in amongst the lochans, one cannot help but be impressed by the dramatic surroundings - sheer walls of cliffs to the right and the Munro, Meall nan Ceapraichean, to the left - but the path zig-zags easily enough on to the flatter section of the col and the fantastic wall which heads up the NE ridge of Beinn Dearg.

Today, however, I was heading over to Cona' Mheall across the head of the majestic Coire Ghranda which never fails to impress.

On the way to the hill I more or less went over pt 886 and then had to descend a fair distance before climbing the final grassy slopes and boulder field to the summit ridge. On the return, it is easier to see a boggy, narrow by-pass track which contours under pt 886 on the south side.

A faint track, intermittent in places, made a rising traverse to the SE to avoid the worst of the steepness and boulders but there was still a lot of ankle-bashing boulder hopping to do to reach the summit. The summit cairn and Beinn Dearg

I didn't linger long because there was a lengthy walk out but the views kept my interest and relieved my fatigue all the way to the forest road section and then it was just a case of auto-pilot to the car and the end of a most satisfactory day. The view of the walk out

Nice pictures of grand scenery and quite a test of your surgery! Been here from the south so interesting to see an alternative route in.