I had not been intending to walk The Speyside Way until 2014 but after completing the West Highland Way and the East Highland Way this year, and having crappy weather on both, I decided one last trek was in order.

Unfortunately none of my trekker friends were available to join me so it was off into the wild, all alone for the very first time.

I had planned to walk it over 4-5 days, just walking as many miles as possible in a day, camping at night. I managed it over 5 days and 4 nights), starting the walk in the afternoon.

The plan was to start at Aviemore and finish at Buckie, as I live in Aberdeen it would be an easy bus journey home.

So the big day arrived, I travelled to Aviemore by train via Inverness, arrived in Aviemore about lunchtime and after a quick walk around Tesco for supplies, I set off on my journey.

The first section was easy going, passing the Golf Course and railway line out of Aviemore, through the woods, joining the National Cycle Network Route 7 across open moorland to Boat of Garten. 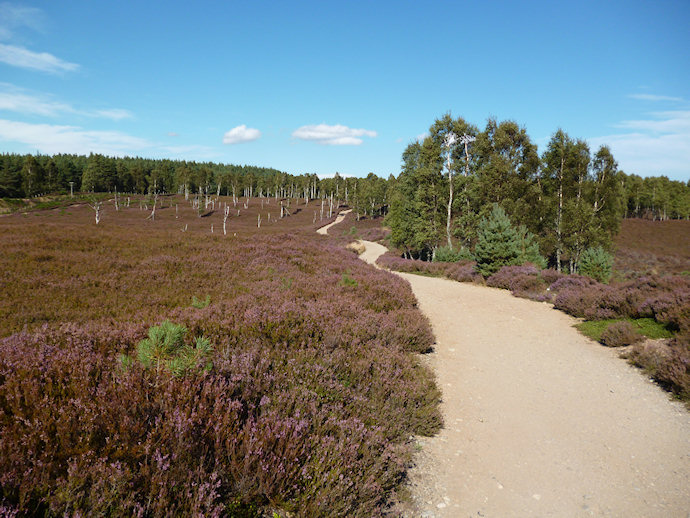 National Cycle Network Route 7 from Aviemore to Boat of Garten 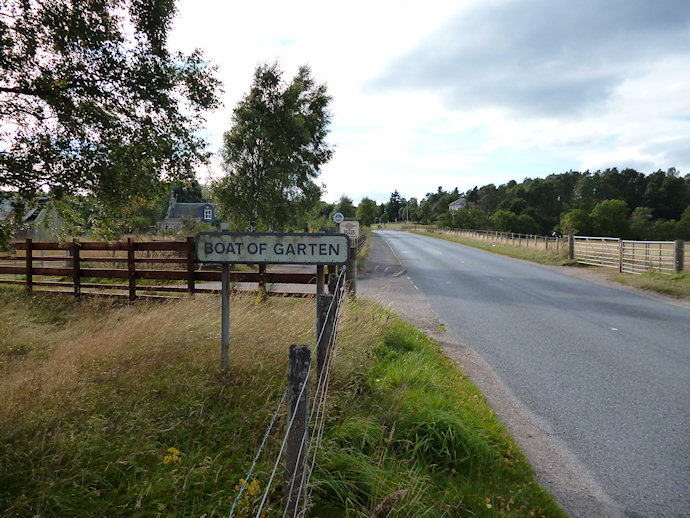 Leaving Boat of Garten and heading for the Abernethy Forest

I carried on walking into the early evening, passing through the Abernethy Forest, and arriving on the outskirts of Nethy Bridge before dark.

I found myself in a wooded area where there was a Picnic bench and small river flowing under the road bridge.
It seemed a good little place to set up camp, it was a little exposed to passers by, but as it was to get dark soon, I felt I had no option but to stop here for the night. Unfortunately, one of the locals passing through the area didn't agree, so after a quick meal it was time to move on.

I packed up my gear and plodded on through Nethy Bridge with my torch trying to spot the way markers, not knowing where I was going to end up. I soon lost the route and ended up following the B970 towards Spey Bridge passing a scary old Church Yard/Graveyard and Castle Roy. I pondered on up the road for a couple of miles in the darkness before finally climbing over a locked gate into a farmers field, where I finally got a nights rest. Luckily there were no Cows or Sheep in the field and I had a peaceful night except for the occasional passing car and at one point, a UFO hovering in the sky. (And no I'm not joking!)

I was up at first light, making sure I was packed up and away before the farmer appeared.
I carried on up the B970 road for about 2 miles before spotting a trail which joined up with the Speyside Way.

Once back on route I found myself following the old Railway line for another 2 miles, before arriving at Spey Bridge then it was a short walk through some woodland to Grantown-on-Spey. 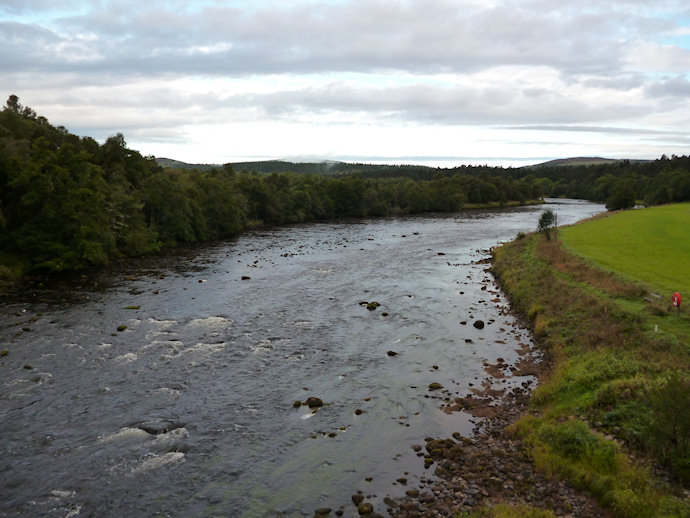 View of the River Spey from Spey Bridge

I stopped by the riverside for a rest before heading into the town for supplies, it was then back into the woods for a long 13 mile hike, upwards, towards Ballendalloch.

This had to be the worst stretch of the entire walk encountering many ascents and descents over steep hills and rough ground, it was also the first day that I met other walkers.

The route started off easy, strolling through the Anagach Woods and passing the old Cromdale station before a big ascent into Tom an Uird Wood. 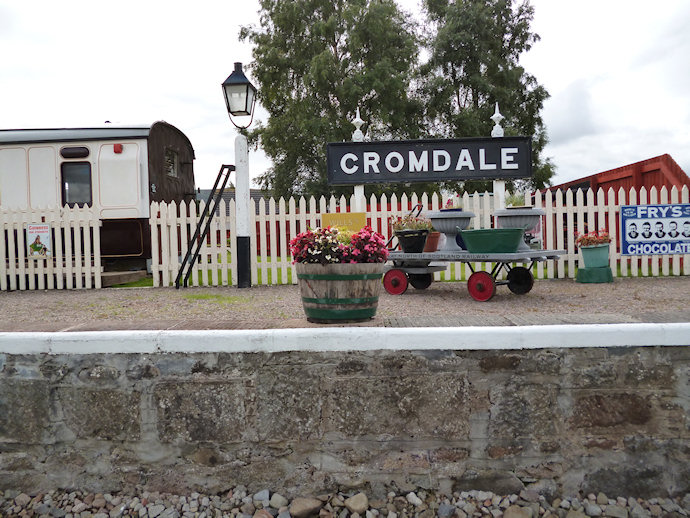 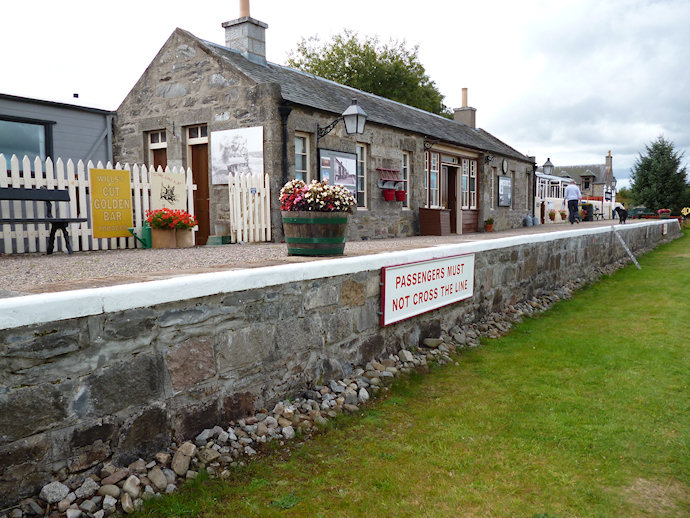 There were many more ascents across farmland before rejoining the old railway path towards Ballendalloch, finally arriving at Ballendalloch Station Wild Camping area. 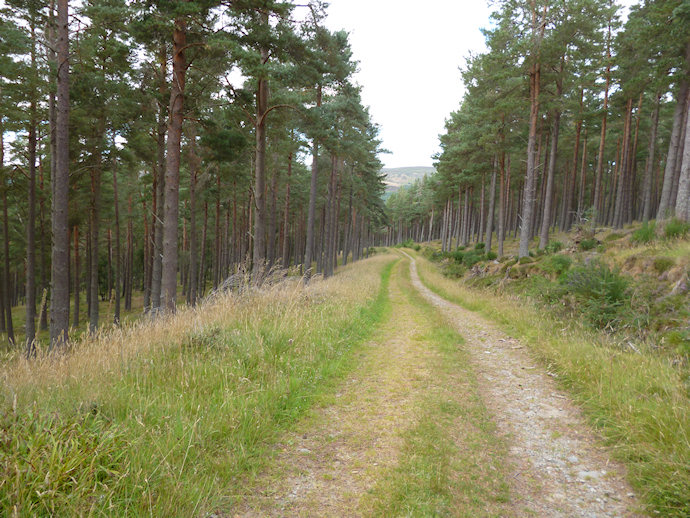 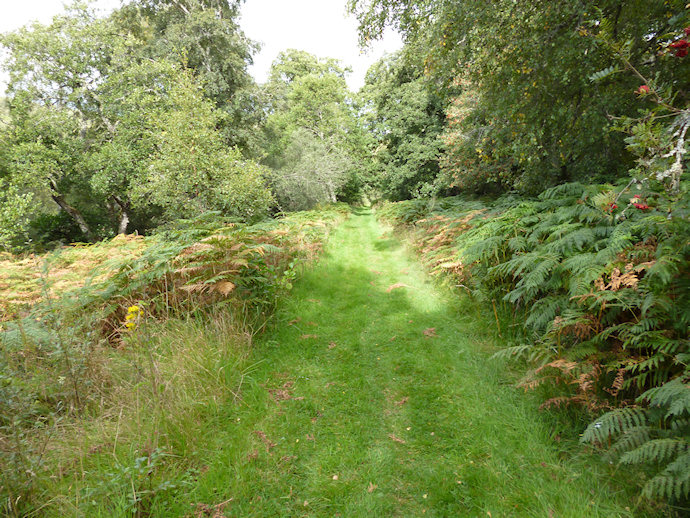 following the old railway to Ballindalloch 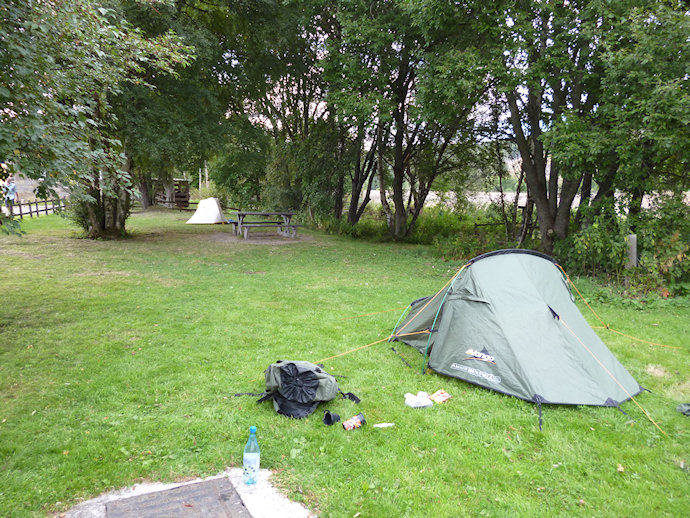 Free campsite at Ballindalloch Station - includes a toilet and a tap

I was the only camper on site, until a short while after when another guy who had been a couple of miles behind me showed up and set up his tent nearby. We didn't speak. I cooked up some Noodles and brewed some well earned Hot Chocolate before calling it a night.

This was to be my easiest day, walking only 12 miles between Ballindalloch and Craigellachie.
I decided not to do the Tomintoul spur, mainly because I can't stand hills when I have my backpack on, too much like hard work.

So I was up for 9am, then walked about a mile towards Tomintoul to get supplies from the Petrol Station. I then walked back to Ballindalloch Station and continued on the trail, crossing the River Spey and heading for Craigellachie. I spent much of the morning following the old railway, passing some old stations and many Distilleries. 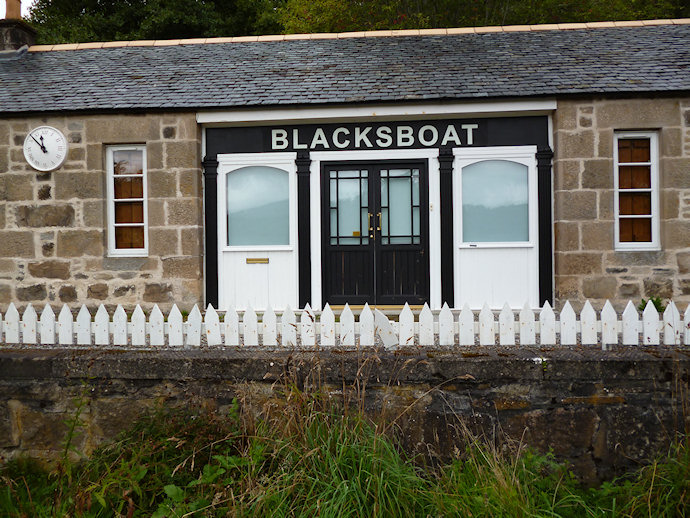 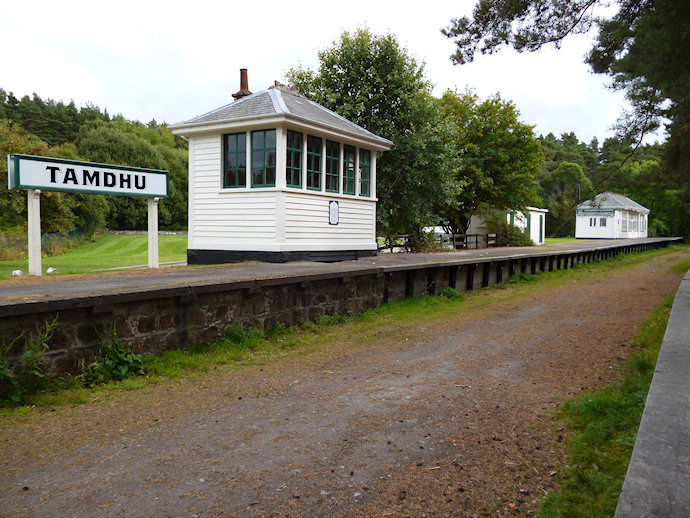 Tamdhu Station, just past Knockando, in the percinity of Knockando Distillery

I continued to follow the old railway, past Aberlour, carrying straight on to Craigellachie. 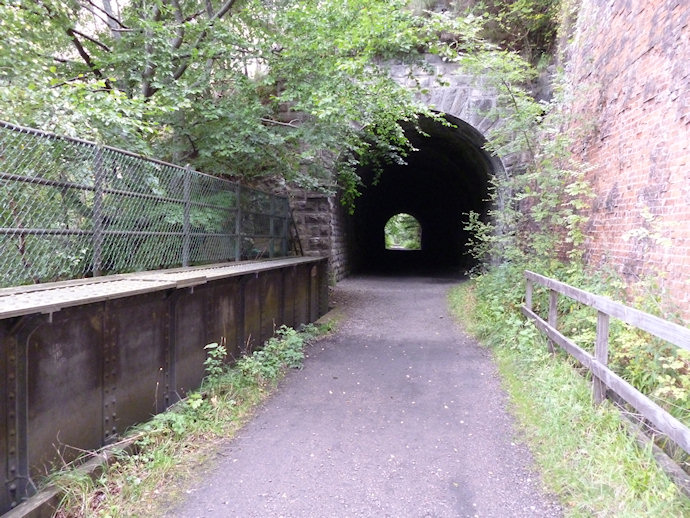 There is a great free campsite with toilets at Craigellachie. I set up camp here before the rain came on, once again I had my Noodles and Hot Chocolate before retiring, as the heavy rain came on and stayed on through the night. 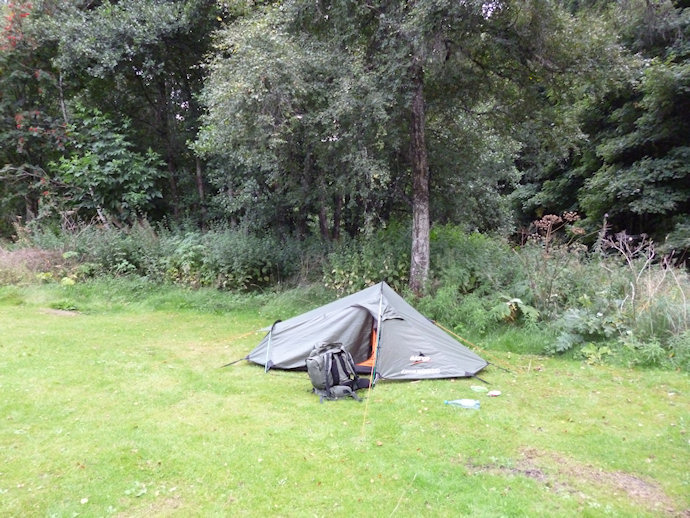 After packing away my soaking wet tent, I headed into Craigellachie in the pouring rain for supplies. It was then onwards and upwards towards Fochabers. Much of the route was by road with some forest tracks thrown in for good measure. I passed a couple of Fochaber locals who stopped for a chat. 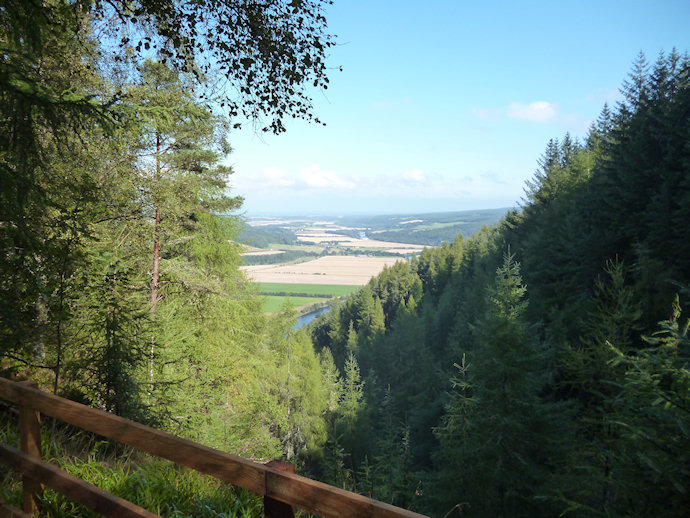 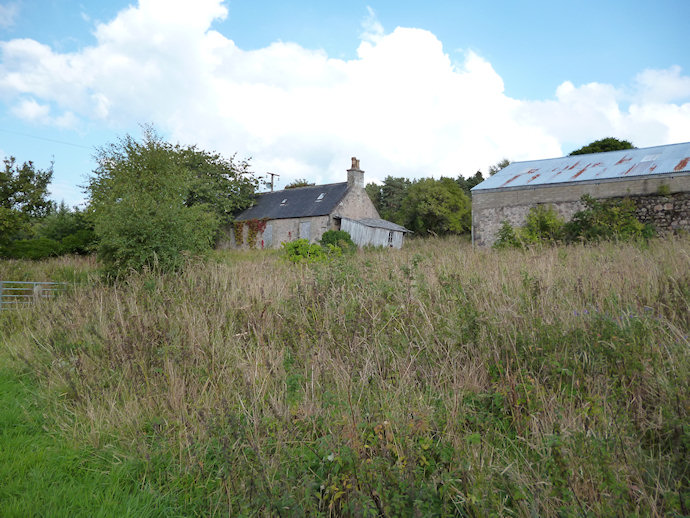 Abandoned Farmhouse on the road to Fochabers

I arrived in Fochabers at 4pm just in time for the Chip Shop opening and after a good feed at the Chippy it was back to the riverside, and what a beautiful evening it turned out to be. 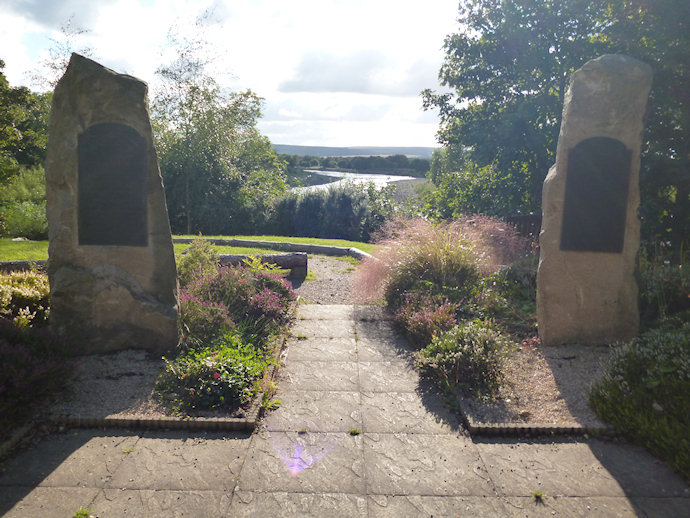 Grand evening by the river spey 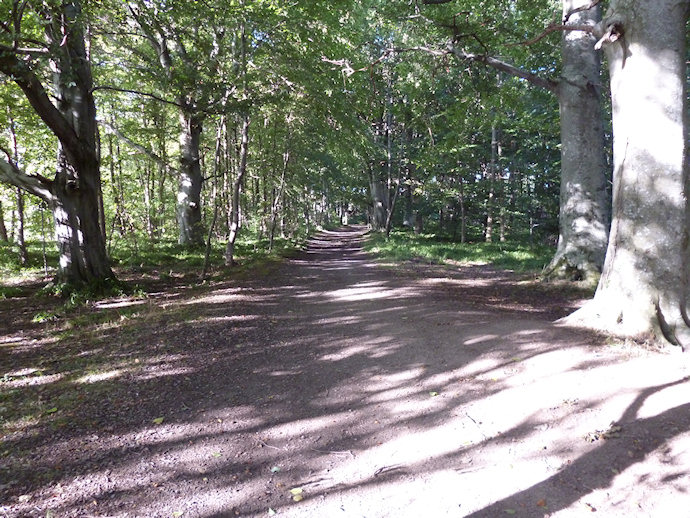 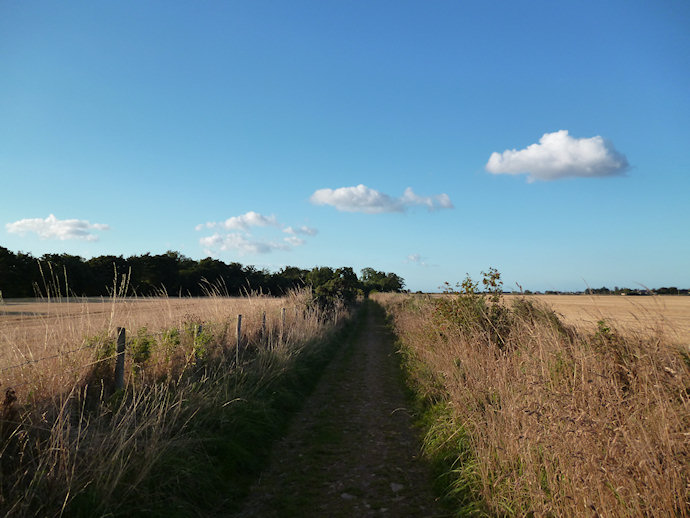 an evening stroll in the countryside towards Spey Bay

After a sunny evening stroll through the countryside, I eventually arrived at Spey Bay around 7, in plenty of time to watch the sun set. 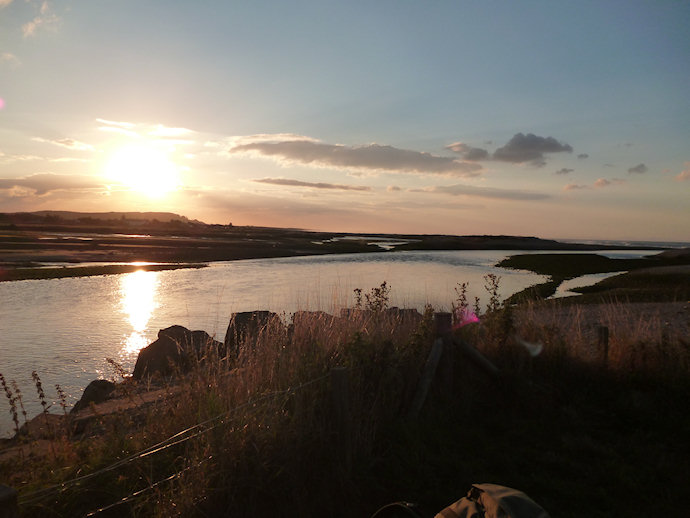 The Sun sets over Spey Bay 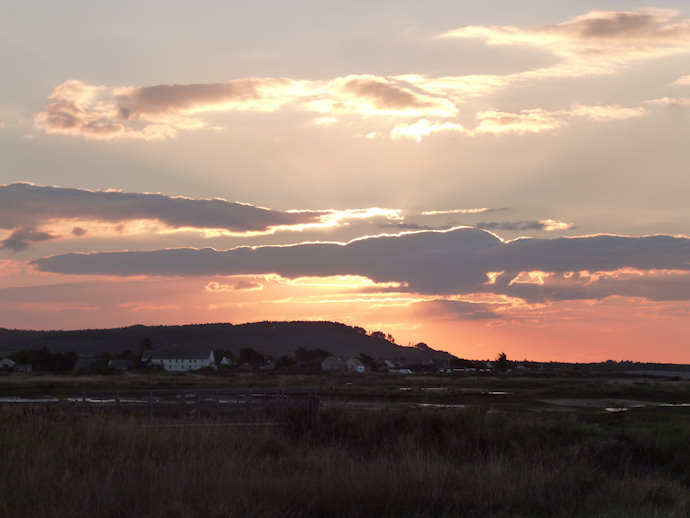 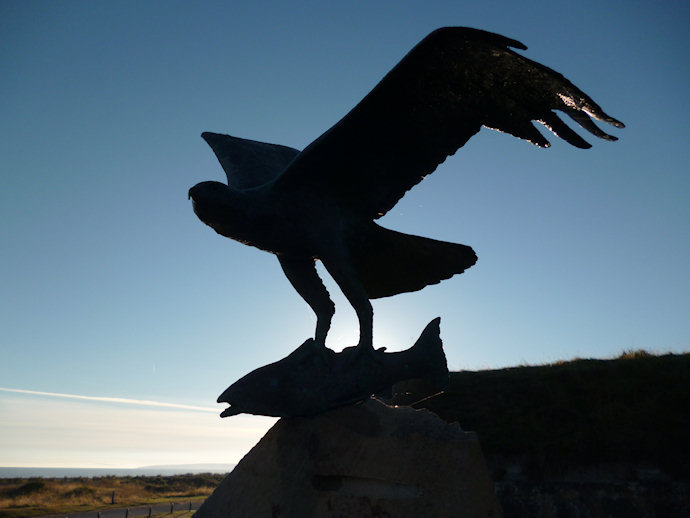 I had a quick look around the bay area before heading back about a mile to where I had found a great little camping spot in a Wildlife conservation area. I spent the night here scared out of my whits but comforted by my mp3 player and half bottle of Southern Comfort. I opened my tent up in the morning and "something" scarpered away from the nearby trees. 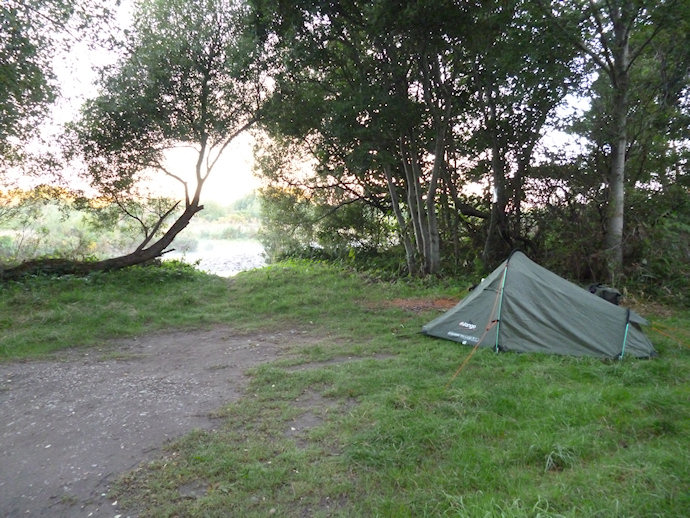 I made it to see daylight, and I was out of there and back on the path to Spey Bay, passing the Golf course, via the forest, before continuing across the country railway path towards Port Gordon. 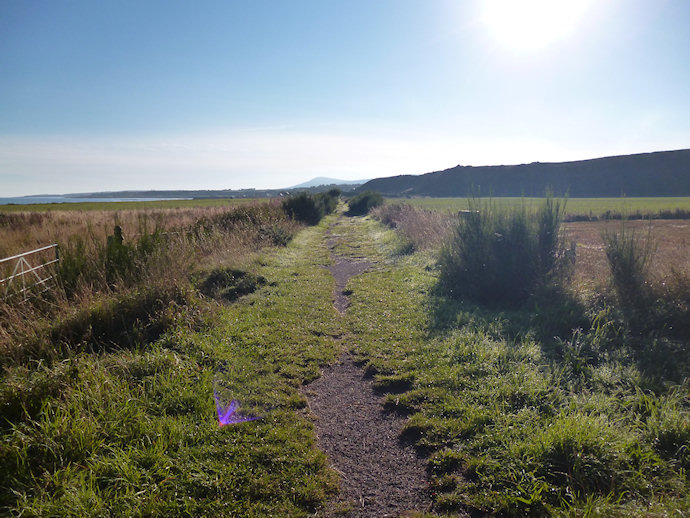 The railway path to Port Gordon 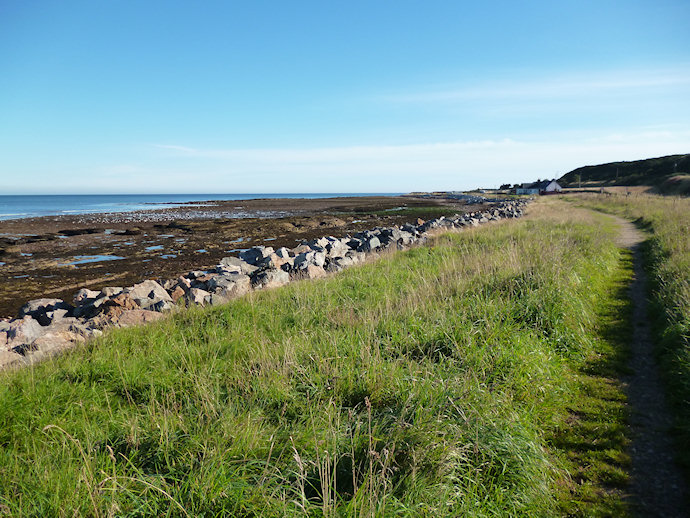 The coastal view from Port Gordon

Shortly arriving at Port Gordon, it was just a 2 mile walk along the coast to Buckie, and a 40 minute wait for my bus home. 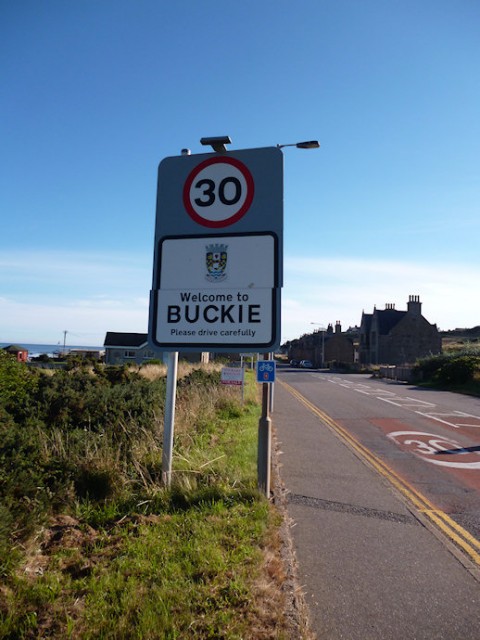 Arriving at Buckie on a beautiful morning 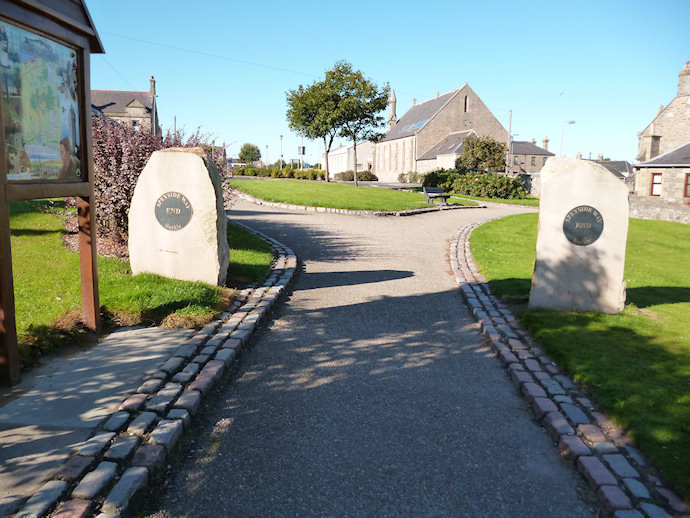 The end of the Speyside Way

I enjoyed reading your write-up on your excursion to the Speyside Way. We are taking it on, in the same direction you did, next April, and your graphic prose and photos gives us a chance to see what is in store for us. Shame we have 450 miles more each way than you did!!

Glad you liked reading it Buggiba, there are lots more photos which I took, but the forum only allows me to upload 25 in a report. I might make a Youtube video slideshow of all the pictures when I get the chance, will add the link here when it's done. It's definetely a walk worth doing, just a pity you're so far away, my next plan is the Rob Roy Way, next year.

Here is the the pic slideshow, now on Youtube:

Great report - brought back good memories as I did this May 2012 (I missed the turning in Nethy Bridge as well but in my case it was broad daylight).

The Tomintoul spur was my favourite part of the walk but it was fairly hilly even without the pack you would be carrying. Even worse, on the downhill bits I had to keep looking back up the hills thinking "tomorrow this will be uphill" as I chose to do the reverse route back to Ballindalloch the following day.

Thanks for the great report, it brought back many memories from our walk in May 2012. We were walking during the time of the Ballindalloch Bridge closure so we thought we had judged the timing correctly to meet our pre-arranged taxi to take us around the detour. Unbeknownst to us was the numerous ups and downs not to mention the 40 kissing gates that we had to negotiate along the section. Luckily the lady driving the taxi had waited an extra 15 minutes for us so we made it but we were running along the railway grade with full packs to meet up with her! It's a great walk and one that we might consider repeating if we lived closer but there are so many others to choose from that the Speyside Way may not make it to the top of the list for some time.